Philip headed over to the Tide2Tide event at Pembrey, to compete in his first ever tide2tide event, We asked him to share his thoughts on the event, see what he makes of it and maybe enter next year?

The Tide 2 Tide event is a new one to me.

So what is it? It’s a fun-filled all-inclusive 6 hour off-road event around the great venue of Pembrey Country Park, Wales. The race is set out between the tide times, so racing starts at 2pm and finishes at 8pm. The A Cycling Events team marked out a 7 kilometres course with roughly 20% on the hard packed sand of Cefn Sidan beach, 50% of flowy single track and 30% of double track or forest roads. The aim was to complete as many laps as possible over the 6 hour period. You can enter as a solo, pairs, or trio.

For me, this was a late entry. I was invited to race in the pairs with 2014 pairs’ winner Kim Little (Merida factory racing). His team mate Paul Hopkins, who was supposed to be racing, knew he wanted his team mate to have the best possible chance of winning again, so gave his spot over to me (only kidding, it was his daughter’s birthday party). 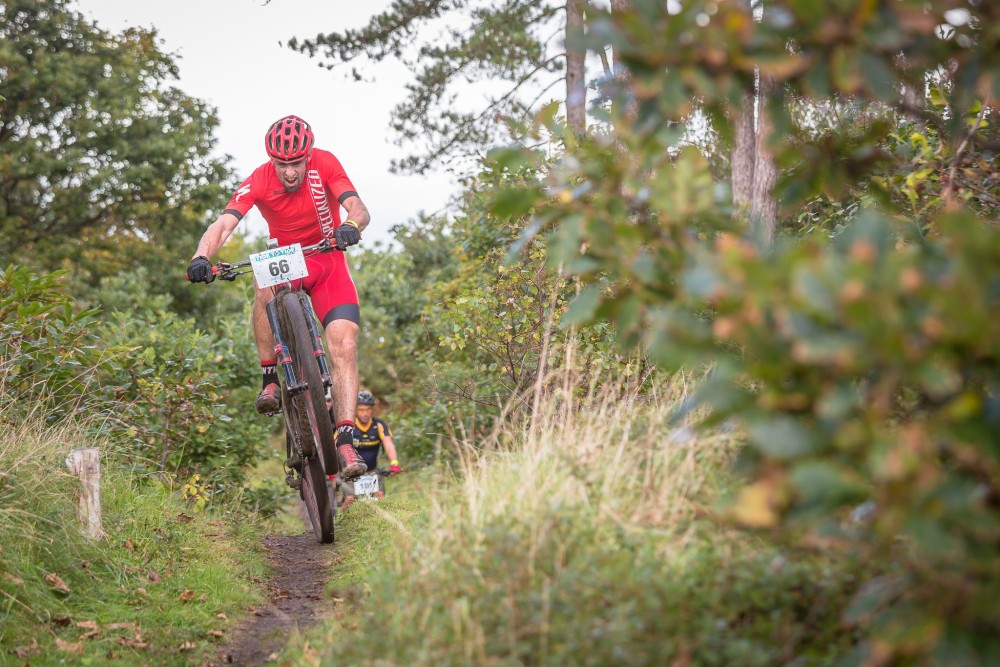 As this time of year is all about having fun and enjoying riding, I accepted to join.

I left home at 9am on Saturday morning, the day of the race… how chilled was this already - I was thinking to myself as I was heading down the M4. As chilled as I might have felt, the weather had a different approach and was awful. The rain was so heavy, the spray off the road was like a cloud of fog.

I met Kim on route near Bath, so we could share a lift together. We arrived at Pembrey Country Park around 12.30. We signed on, so we could get a sighting lap of the course before 2pm. 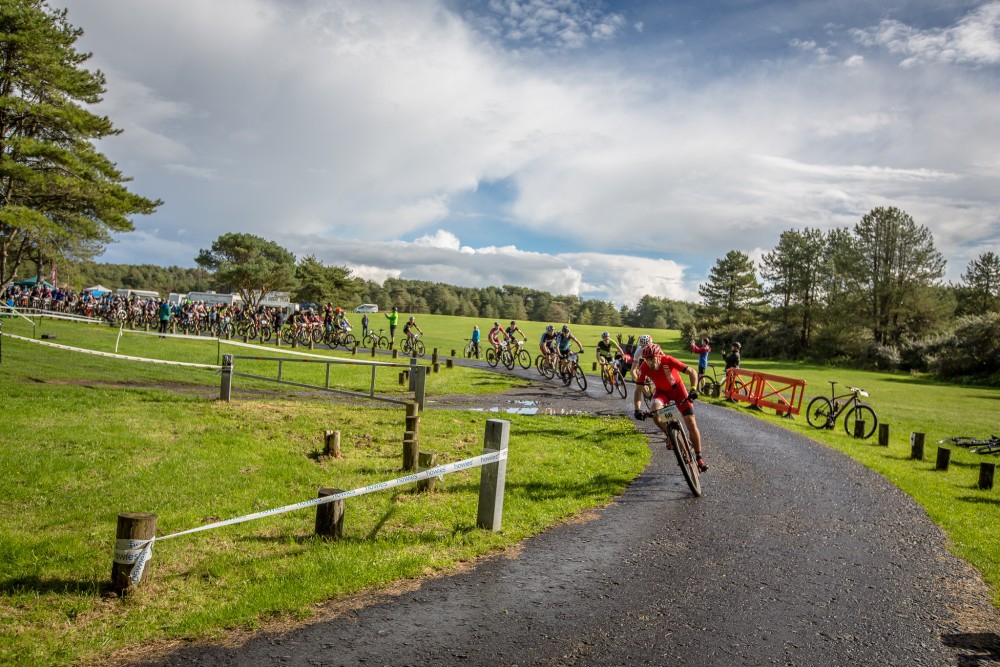 The course started on a 75 meter tarmac road, then into some narrow forest single track, up a shallow climb and then into the first A section, a nice little fast drop into a narrow right-hand trail. This flowed over some hard sand dunes and the final bit was on a deep sand path towards the beach. The path was slightly up hill and surprisingly took more energy then expected, especially as we was just about to beast ourselves down the 1/2 mile beach front into a head wind - lovely! To get off the beach, we were sent up a steep bank. It was a case of jumping off the bike and running up the sand bank. If the beach didn't kill the legs, the sharp climb certainly did. Jumping back on the bike at the top with a couple of loose sand corners, we were soon entering the forest on the best swoop single track Pembery has to offer. This section never lasts long enough in my eyes - you can carry so much speed so effortlessly.

I’d be happy, if the whole course was like this. Once out of this section, it was on to a fire road through the forest. A sharp right turn took us around a pond footpath and on to the next fire road, which had a slight sandy climb, then slowly easing back down along a flat grass path into the next set of woodlands. This was a nice, narrow grass gradual climb to a super fast straight descent into a left hand turn that, if you took the right line, you could hit at speed. This felt so good every time. We followed the edge of a fire road into the next set of woodlands. It was a slow, narrow left turn into the footpath, which had a short sharp power climb on to some tractor tracks, which held the only bit of wet mud on the course. This section was rutting up nicely, so line choice was key. Once out of this technical section, we were on to a final tarmac road, which was a fast paced sprint (if like me you were in pairs and knew you getting a rest). Then we popped on to the flat grass loop around the arena to finish the lap.

Now that the sighting lap was out the way, we headed back to the van for some last minute race prep talks. We decided I would go out first for a one lap wonder and see how we get on from there.

Two o'clock had arrived, as did the sun to warm us all up. Off the start I went hard to get the hole shot into the first corner and on to the narrow forest single track. I managed to get on to the beach with a little gap. It was a case on tuck in, head down and pedal like a bitch. As I was getting ready to jump off the bike to climb up the bank off the beach, I had a quick look over my shoulder and saw about a 10 second gap. Running up the bank was tough after such a fast start, but knowing that the next section was super fun kept me pumped and wanting more. I went all out in the fun woods section for the remainder of the course and managed to pull a comfortable lead gap. I swung into the change over area and gave Kim the wrist band to carry on for the second lap. With lap one out the way, in a time around 15 minutes, I knew it wasn't going to be long before I was heading out again. 15 minutes had passed and I was getting ready for my second stint. 20 minutes had passed and still no sign of Kim or any other riders for that matter…umm, then a rider finally comes in and I realise that it’s the team, who was behind us.

Uh oh, whats happened to my Kim? News comes in that someone has changed the direction a couple of directional arrows marking the course out, making riders do an extra loop because of missing the vital turning. Kim came in 35 minutes later and doubled the course lap length hahaha bless. The race was on to catch up with the leaders whilst the organisers were sorting out what has happened and putting the arrows the right way around. I raced on to complete my second lap and sent Kim out on his second lap. This time finding his way home in a good time. We decided to start doing two laps at a time, so we could fuel our bodies better with around 30 minutes instead of 15 minutes rest. We carried on like this for the next 4 hours doing two laps each. It seemed to work well. Time was coming up to 18:45 and it was starting to get a little dark in the woods.The tide was heading in fast. The organisers had a tide marker on the beach, and as soon as the sea touched the wooden stake they changed the course to divert us off the beach and along a double track walk way following the beach line down to rejoin the original course just after the sand hill climb. The new section was flowy and fast, except for a short, deep sand hill climb. You could ride it, but had to carry speed out of the corner and pick a line, getting ready to pedal hard. As I was one of the first to use the new section of course, most of the sand was soft and no lines had been made yet. Once I completed my two laps, I sent Kim on his way, telling him about the new section of course. 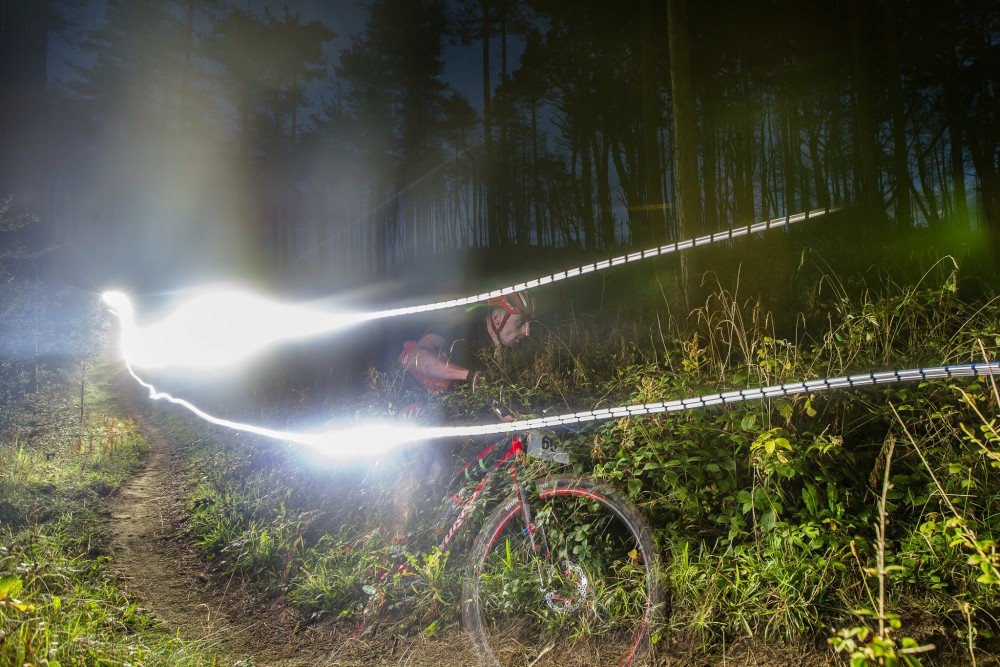 I put my Hope lights on my helmet and bars ready for my first light stint. I love riding in the dark, the trail becomes a single file focus and I feel I could be anywhere in the world, just riding on sweet trails with no idea of what’s happening outside of my vision of light. It feels so fast and you become at one with the trail in front.

We decided to drop back to one lap wonders now we were getting closer to the final hour. Riding one lap was a good choice, as you could keep a good pace up and not only that, but it kept you warmer in the pits, as we were only stood around for 15 minutes instead of 30 minutes.

Knowing the time was getting ever closer to 20:00pm, the final dead line time, I was getting warmed up, as Kim was due to come in around 19:45 and I wanted to put in a solid effort to get back before 20:00. I was warming up, keeping my eyes on every rider coming into the final corner, just waiting for Kim. 19:44 had arrived - still no sign of Kim and the commentator was saying that no one was going to go out now surely. I was ready to chew my bars for a power lap and I was shaking with adrenalin, wanting to get a final lap in.

The time hit 19:45 and Matt Page headed out on the quad bike to sweep up any final riders. Will I get this final lap in, with no sign of Kim and the time ticking away? It wasn't looking promising… then Booooom in came a flying Kim. A quick band change over and I was off with a cheer from other fellow riders. Time had just gone 19:46, as I headed over the start line. I was buzzing, hitting the trail at a 100%. THIS WAS AMAZING….. pitch black, only my lights giving me guidance… I was loving it. Everything was coming together for a super fast lap, then about 4 minutes in… Bang! I clipped my bars on a small tree, which threw me into the bracken. Still buzzing and possibly a little more so now, I was picking myself up off the floor, before I hit the ground (well that what it felt like anyway). I was giving it full gas and not even feeling it, the legs were strong and the lungs felt massive. I passed matt on the quad and then was stating to catch the final riders out on the course. This gave me hope. I could still do this….. I've got this…. pushing harder and harder, attacking the hills like they were not there, on to the final tarmac stretch, looking down as I'm clocking 24mph on to the grass arena around the final bend and across the line………. Did I do it? Was I back before the 20:00 O'clock dead line?.. I was trying to catch my breath back, as Kim came over with the news…. Did I do it? Had I put in the performance I wanted to? Did the crash set me back too much time?.. All this was running through my head.

Kim chooses to not tell me yet, but informs me that we took the overall win.

We headed to the van to get some warm clothes on for the podium. The prizes were somewhat interesting, a tube of glow sticks. Yes, glow sticks, the things that you crack to made ravers glow in the dark wands… hahaha. Brilliant. That just about wrapped up a awesome event. This race was brilliant fun and a perfect end to an incredibly fun year.

Thank you Kim Little for the invite. If it wasn't for you, I wouldn't have known about this event. Thanks to the A cycling team for an outstanding event. I throughly enjoyed it and will be back for more.

Just to clear up my last lap….. I was 20 seconds short of making it in time. Therefore the last lap didn't count.

A big thank you to Anthony Pease  for allowing us the use of his images. If you took part in the event, there is a good chance that he has some images of you.