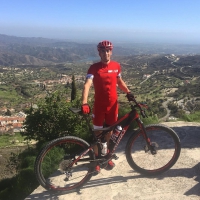 WHO SAID, IT WAS A GOOD IDEA?
I had a good night’s sleep, finally getting my eyes shut around 23:50, as I promised myself I’d be asleep by 00:00. I got up at 08:00, had a shower, then cooked up my porridge. I was trying to find information about the course that I’ll be riding today, as I haven't had a chance to practice any of it. But with no luck finding information online, I was left to ask people later on, when at the start arena. I heard yesterday that is was going to be a tough first half, but the some of the best descents on the island. That left me with a little hope. I was picked up by the shuttle bus at 09:40 and was in the start arena by 10:00. The race was due to start at 11:00. I got chatting to Grant Ferguson, and he explained the course to me. Oh well… I think, I'm in for a shock. I was gridded 51st off yesterday’s result. At 10:40 we were put into our grinding pens. These are hold areas, where you have around 10 riders per pen, before you cycle to the start line. We were all on the start line and ready for action. In pure foreign style, as soon as you have been gridded, all the riders move about 3 bike lengths forward and, if you’r not careful, you can find yourself at the back, before the race even starts. I’ve become wise to this and was one of the first to push up. From what I've heard about this course, I need all the help I can get. 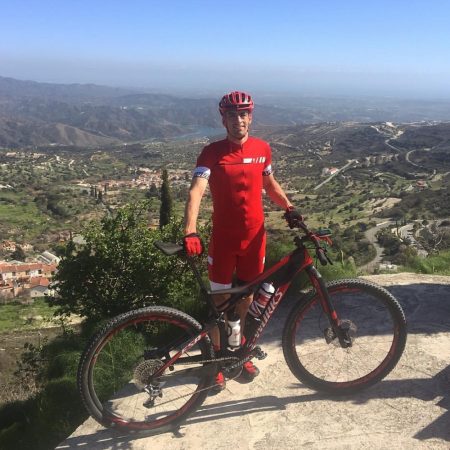 At 3 minutes past the hour of 11, it was time to start. It wasn't your usual explosive start, we had to follow a car out the town and on to the main road, where we started the first hill climb. Oh well, this is it. I had about 40 riders around me in every direction I looked, tyres where rubbing, people were getting arsey with each other for not giving enough space, and to make matters worse - every 30 - 45 seconds people were wanting to attack. I stuck to my plan, which was to sit in close to the front, as I heard that this climb was around 40 minutes long. Well, after 20 minutes the plan was starting to fade. I was suddenly left remembering why I hated hill climbs and lived in a flat area.

I was sat around 30th and was happy at, as I knew I was pushing fairly hard to get my weight up the climb. We were now, probably, 25 minutes into the ride. I didn't have many attacks left in me, and then the mother of all attacks happened. I just wasn't ready, but knew that something was going down up front. I stood up to give chase, but it was too late - we dived into a sharp left hand, harping on to some byway type road. It flowed down for around 1 minute and then to my pure pleasure began to climb again, this time off road. This carried on for another 30 minutes, I was not in a happy place right now, I was just hanging in there and staying with the group of riders, The hill took some nasty steep punches and I was starting to loose the group in front. 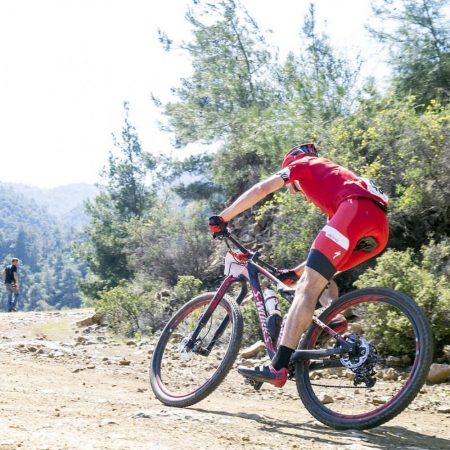 Not knowing how much longer this climb was going to go on for, I had to be curious with my energy. But the trouble now was the wind, pushing as well, so I’d have been better off to kick hard and stick with the group. It wasn't too long before I was edging my way back towards the group, slowly closing the gap of about 5 seconds. The effort I was just putting in started to take it’s toll, and the next punchy climb came straight out of a corner. Normally, I like to carry my speed and keep momentum ready to hit the climb, but with riders in front this wasn't going to happen. It was almost a stop-start situation. I tried to keep the pace of the race whippets but it just wasn't happening. The gap was growing. I knew we must be nearing the top soon. To my relief, the sweet single track had arrived and, as the group of about 10 riders had pulled a 15 second gap, it was just me and another chap to tackle the descent. He was quick, but I was pushing him down, which made him make a mistake and me being too close to hitting the floor too. I was fuming, my new bike was hitting the stone and dirt, and quick blunt shout, “Get out my way!” done the job.

I was on my own flying down the hill enjoying this as much as I possibly could. I hadn't released the pressure out of my tyres from making them tubeless last night, so I'm still running 50psi, which certainly kept me on my toes and I was just skipping across the gravelly surface. But it made me feel rad, when a big corner came up, and I had a full drift on. It was soon putting that massive smile across my face, and I was buzzing with adrenaline. The course ended up on a fire road, but kept going down, which was great to just get the momentum rolling a few up hills - with the carried momentum they were ok.

With 5k to go I was still on my own, with no one in sight. It was flat-ish smooth fire road and somewhere you would definitely benefit from being in a group and taking it in turns on the front, but with no one around I was left to press on by myself. The 3k mark arrived, and I was glad to see that sign, but then I looked up - I was starting to climb again. I was dropping down to around 6mph. This isn't what I want to be happening and it just went on and on and on and on. I saw two riders up in front, whom I was soon overtaking, and then, with 2k to go, I spotted another rider, which gave me a little more pace. I was hunting him down. Slowly, but surely I’m reeling him in. The pain was growing, and my hate for slow speed long hill climbs was now massive. We’re still climbing, as we pass the 1k mark to go. Then I see the top of the hill - and I pop past my man. With 500m to go its a little descent, before a 200m climb, where the guy just nips past me, and I'm left following for last 100m to the finish. I would love to say I enjoyed the race, but its far from the truth. 1 and a half hours of climbing is not my idea of fun. At times I was cursing the people, who said I’d get on great out here. I’m wondering, if they know me at all. I must stress: me and non-flowy, slow-speed climbs do not get on - we’ll leave that to the skinny racing snakes.

I somehow still always manage to have the big smile across my face and I do just love biking. Even through I was unhappy with my race, when I look back, I'm so grateful to be able to be out here in the sun, riding my bike. It makes all that pain and agony worth a while. I’ve been informed that tomorrow’s stage is just as bad, if not worse, and yet I'm still excited to be getting out on my bike and to be riding with the Worlds greatest. I’ve got beautiful sun and lovely scenery, and when I look down between my legs an see that beautiful Specialized Epic - who wouldn't be cheerful and have a constant smile across their face.

Once I had gone for my warm down, I met up with Grant Ferguson again, as he was waiting to collect his bronze medal. We were having a great chat for about 30 minutes. Not only was he to collect the bronze from today, but he also got to put on the yellow leader’s jersey, as he's currently leading the Cyprus Sunshine cup 2016. A great job - and some amazing efforts from the young scot.

So, for now it’s time for food,

PEARCE out (cheers for the tip, Steve)