The Tuscany trail is a self-supported bivvy thingy through the mountains, just shy of 400 miles, nothing too dramatic.

I had the privilege of riding with fellow Transcon finisher and Starley Primal rider Gaby Leveridge. Also joining us was a member of the Total Women's Cycling team Lorena Jones. Officially a girls weekend! 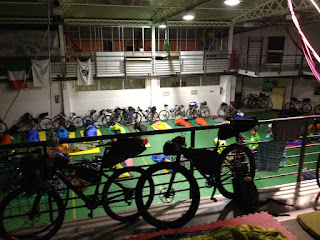 Stick three girls in a random sports hall with 200 Italian men and it's like bees around a honey pot. No less than four fluoro Italian stallions tried to help Gaby put her wheel in. Apparently you never see girls biking in Italy, they like to shop (an Italian said that, not me), so we made the newspaper. I was sporting my best fluoro jacket.

We left under grey skies being chased by an impending storm but nothing could stop us as we were powered by pastry and loaded up noticeably lighter than most. Lots of fattys (bikes not people) and the odd crosser; a right bag of all sorts. 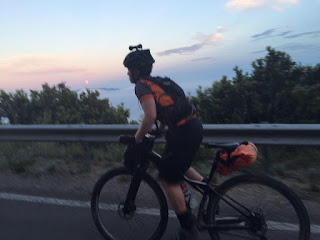 On the first climb everyone ambled along together, very civilised. When we arrived at the goats and donkeys section it was time for a hike-a-bike. I was glad I left the kitchen sink at home as I launched my bike over my shoulder and legged it up. Being short I feel I need to work faster and made good time. Occasionally I nipped down to help Loza and left Gabby to it as I know she's hard as nails and will just crack on. 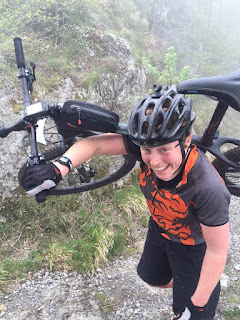 We made a quick decision and Loza went on a nice train ride to Florence. We needed to smash over the pass before it got really dark. We expected a big up and a big down but we actually got a camels back which sucked out every ounce of energy we had. The night drew in and the forest came alive once more with its natural inhabitants. I got eyeballed by a stag who turned away and flashed his white rear as he danced off into the darkness. A few bats squeaked around above us and the occasional scuttle could be heard from the bushes. 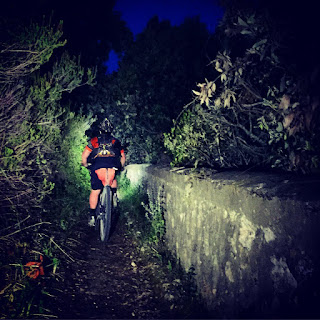 A welcome relief came when we spotted some light pollution in the distance, this meant only one thing: pizza! A time trial to the pizza and 24 inches of dough later we no longer felt 'the hunger'.

Our next challenge was to bed down. We found a very regal B&B and when I walked in I thought I'd stumbled into a family dinner. They were fully booked but luckily our knight in shining lycra sat alone at a table and after much gesticulation and hand-waving we got the go ahead to share his room. Kindly we got the gigantic four-poster while he gallantly took the camping bed. We rudely woke him at 4:30 am and peddled off into the soggy darkness.

We were in the flow, heads down women on a mission. At 6:30 am we were ready for breakfast. Our standard order of four cappuccino's was placed, along with a tuna sandwich. I'm not the weirdo who ordered the 6.30am fish sandwich, although I did get the urge to buy a scratch card, which I feel is equally strange. I had three croissants and it all came to about €7. 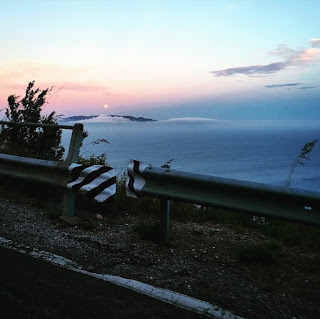 Arriving in Florence riding along the river provides the quintessential Tuscan image. As cities go negotiating it wasn't too hectic and we were soon above it. I took one last peek at the city and then the focus turned to the Garmin. Making navigation errors is costly so I really felt that not getting complacent and staying on course was important. Between Gaby and I we had it dialed.
Through the undulating countryside we rode and now the route followed a lot of the Eroica route, white gravel roads through vineyards and rich agricultural land leading us towards the ever-warming South. We got lucky and managed to get to the supermarket just as it was shutting. All three of us overshopped and sat on the floor having a stinky cyclists picnic.

Seeing as we had reached our daily target we decided that it was bivvy time. We picked a suitable field and got cosy, well, as cosy as using an spd for a pillow can get. I was feeling rather smug in my posh new sleeping bag (360g, plus 5 degree, custom-made, cost of a month's rent, all-singing all-dancing bag made of the finest duck feathers known to man) whereas race whippet Gaby assumed the prayer position for the whole night to retain what little heat she had left. Loza was losing her bivvying virginity and seemed to find grass as suitable as a memory foam mattress, promptly drifting to land of nod. 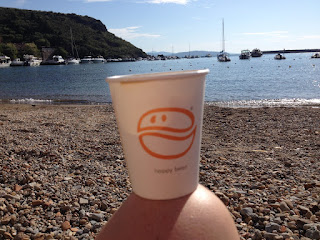 Up at 4:30 am, the first climb was very welcome. We soon passed some other cyclists rustling around in the bushes, we met Giacomo and Alpkit Kenny later that day and they said they'd heard us coming. I shamelessly told Kenny how much I love Alpkit.

The route took us through some pretty spectacular fortified towns with traditional tall narrow streets, cobbled paving stones and a glowing orange hue that can only emit from warm, old Italian earth. It even smelt good. The route now was rolling hills and endless sky. My gelato consumption was impressive and my caffeine requirements excessive!

I was free; Free from rules, free from reality. In that moment I wanted for nothing. This is the life!

After 16 hours of riding we decided to save the island as tomorrow's final swan song. With talk of single track we decided it would be fun during the day and that we weren't going to miss our flight so we could relax a bit. Booking into a hotel we then smuggled Gaby in over the balcony. Luckily we were on the ground floor so she didn't have to scale the drain pipes.

Starting at 4.30 am is surprisingly energizing. The anticipation of a beautiful sunrise is the perfect reward for getting out of bed. The island provided a change of terrain: quite rocky double track snaking along and through the mountains with a vast beautiful sea down below and the sharp light totally blinding as you crest around a shaded bend.

The "hunger" was taking hold and Gaby and I were contemplating snorting a Torq powder sachet (because water was running low). Judging by the Garmin we would be dropping into a port town quite soon. Narrowly avoiding powder snorting we made for the nearest food emporium. We found the most delicious sandwich shop which had a bar next door serving coffee and behind that was the beach. We sat in the roaring sun looking out to sea and inhaled our picnic and four coffees, a three course breakfast was necessary and Gaby hit the jackpot with a bucket of fresh fruit and yoghurt. We dipped our toes in the sea and almost decided on a full submerge as we'd soon dry off in the heat - but a salty, wet chamois might not be too pleasant after a couple of long days in the saddle!

We decided to nail ourselves in a TT to the end (just to be silly) plus a sprint finish. It was getting warm and it was time to end the Tuscan adventure and focus on the logistics of navigating Italian trains back to Florence.

No huge crowds, no fanfare, just warm internal peace and satisfaction, knowing you spent your weekend free time wisely and in the following days when you're slaving away at work you'll dream fondly of that moment, when all you had to do was RIDE.