The Kielder101 in it’s second year after taking over from the longer historic 100 mile event offered riders a 101km endurance xc challenge in the remote hills, forests and moorlands of the English and Scottish borders in deepest Northumberland.

Riders had an early wake up to prepare for the 8am start time for both the 101km and shorter 60km options offered. It was pretty drizzly at the start area so riders were reluctant to leave the shelter of their tents at the campsite. Nevertheless around 250 brave souls lined up for the challenge. There were several jacket on and off dances going on as despite the drizzle the temperature was relatively clement. Most set off under cover though as the lead out headed along the main fire road track to string the riders out. Self acclaimed ‘elite’ riders were gridded at the front but the pace didn’t rise until the lead out truck pulled off and the race began up the first major climb. The climb was nice and long without being too steep so this spread out the pack nicely before heading in to the first bit of singletrack. I found myself just behind the leading couple of riders, last year’s winner Tom Wragg and local favourite and fellow M Steels Cycles rider Rich Rothwell.

As we swooped through the first bit of manmade singletrack already slightly splattered and muddy from the spray off the fire road I quickly realised that my forks weren’t really working properly which made things a bit more tasty on the greasy singletrack. It turned out after servicing the forks recently I had failed to adjust the rebound properly, won’t be making that error again I can tell you! 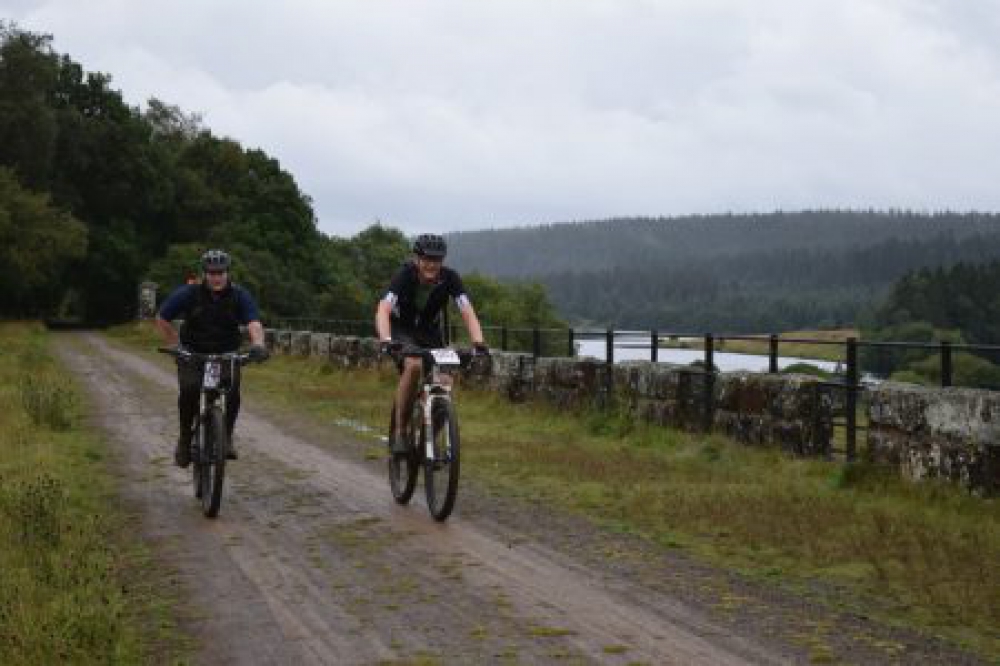 The route was excellent with a great mix of trails and scenery. As you’d expect over such a distance there were some long fireroad stretches but pretty much no on road riding. Some really steep grassy woodland sections popped up here and there to link trails together and there was good use of the manmade trails both at Kielder and over the border in Newcastleton. Despite the changeable conditions I was smugly temperate all day in my choice of weather proof arm warmers, jersey, gilet and thin leg warmers with overshoes.

The pace at the front was relatively sedate at the start for a change and I was comfortable to let the front three rides drift onwards as with having some recent hard races in my legs I didn’t want to empty the tank too early. I found myself riding with another chap and we went back and forward for a couple of hours until I lost contact after a slight off in the woods just as we were heading over the border in to Scotland. I kept pushing on but didn’t quite have the speed to bridge the gap and was enjoying the ride too much to worry too much about position. We had passed Rich who had dropped back with tyre trouble and wasn’t to be seen again so the race for 3rd place was on. 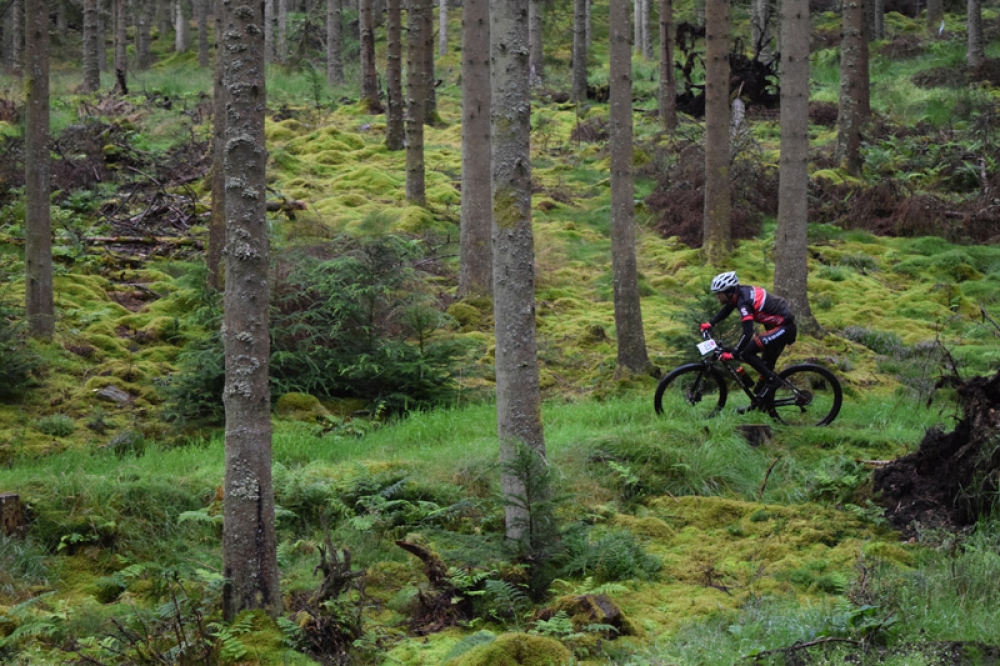 I didn’t really want to overdo it knowing that once we were at Newcastleton there was a super tough undulating time trial back along the border path to get back to Kielder before a hike up Deadwater Fell to reach the final descent. By the time we reached the long time trial section I was feeling pretty good and wondered if the chap in front might slow up a bit so I could get him in sight. I pushed on at a hard sustained effort but didn’t really know where he was at any point. A quick hop across a woodland stream near the end wasn’t particularly welcome after this though with a full ankle dunk before a shameful cyclocross style carry up a steep bank.

We got back to Kielder and still feeling pretty solid I motored up the penultimate but last major climb of the day to Deadwater where super fun and flowing built singeltrack awaited. Just as I was cresting the hill I caught a glimpse of the rider in front but he was away down the singletrack whilst I had a bit of climbing left. I’d normally fancy my chances to catch a rider on a long descent but this guy was decent on the downs having ridden with him earlier and my forks were making me a bit more ragged. As it turns out I did catch him a fair bit but just too late as the finish line came too soon. Still I was super happy with 4th after only really expecting a top 10 with recent racing in the legs.

Tom Wragg smashed out another great ride to take the win for the second year in a row with a super quick time of 4 hours 45minutes or nearly 13mph average! I was 20 minutes back so not too shabby. I also strangely didn’t feel at all tired at the end as I think I had drifted in to 24 hour racing speed so felt wide away and ready to keep going. Obviously I wasn’t trying hard enough!

The event was excellently organised with drop bags for riders at Newcastleton and two other feed stations on route. A decent swag bag at the start and end is always a nice touch from race sponsors. The 101k and 60k courses joined up towards the end so it was good to be able to have a few riders to say hello to after riding solo for a big chunk of the day. Lots of different bikes took part as well with something called ‘monster cross’ featuring of which I have no idea what that entails! Rock UK helped out with the marshaling and the whole team were very friendly. The only let down was a somewhat soggy chilly children’s size wrap when we got back to the Café when super size was definitely needed. Still it was included in the entry so can’t complain too much.

The scenery around this event is pretty epic, Kielder Lake is stunning and the views from the long boardwalk sections over the tops on route to Newcastleton over the boards are awesome although the greasy conditions meant you couldn’t look up for two long! The big day out may even become bigger again with the full 100 miles next year being a possibility which I’m sure would get a good turn out if run by the same organisers again. Smiles all round at the finish line despite muddy bikes and soggy bottoms is a sign of a great event. 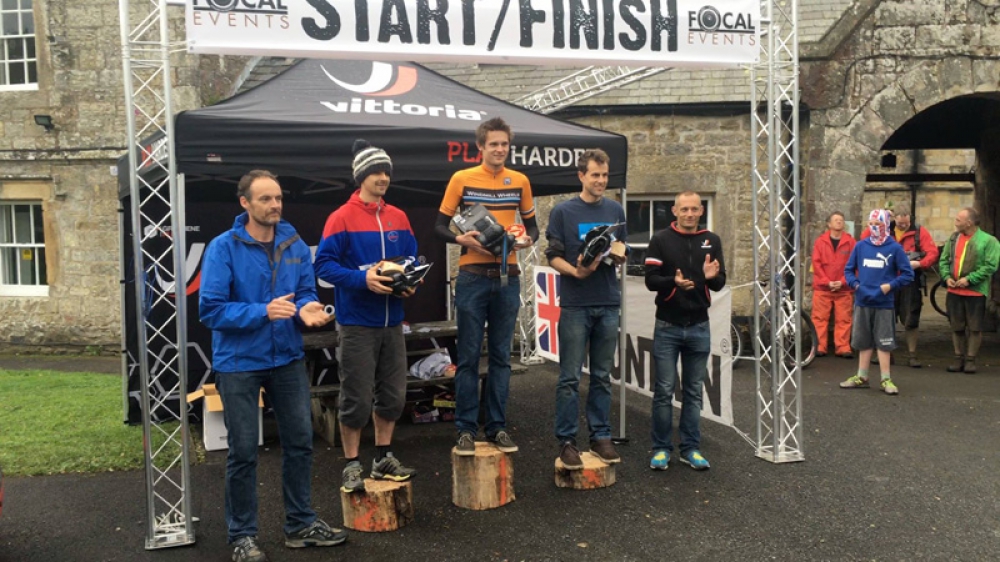 Results can be found here

Thanks to all my sponsors for continuing to support me and particularly good to see the guys at M Steel Cycles in Newcastle who have helped me since I first started racing up in the very forests of Kielder!
www.mattjonesmtb.com
Twitter: @mattjonesmtb