Rockets and Rascals Hell of the West had been on my to do list since I first saw it advertised back in 2013. Unfortunately I wasn’t able to enter that year, and after the event not being run in 2014, I was looking forward to getting involved in 2015.

Historically advertised as a CX Sportive event, this year the event was due to be part of the Dirty Rascals Weekender, a weekend of off-road cycling events based in Newnham Park, featuring an Enduro Gravity Rally, a Retro Mountain Bike Race, as well as the new and improved Hell of the West aimed at XC riders too. Unfortunately due to lack of interest the majority of the weekend’s events were cancelled, with just the Hell of the West being continuing to run.

It was a grey and miserable October morning but at least it was dry for a change. The days leading up to the event had been pretty wet, so I knew there’d be some wet and muddy riding ahead! I headed over to the Barbican a bit early to meet up with some team mates before setting off.

Lining up on the start line at 8am, we were given our event briefing. Whilst the event would start and finish outside Rockets and Rascals on the Barbican, it would only be timed from a control point in Cann Woods as the ride up to this point would be on main roads and shared paths. There were also a series of three challenges along the course – successful completion of each challenge would result in points on our number boards, which would then convert to beer tokens back at Rockets following the event.

We headed off shortly after, and despite being un-timed everyone was in the same mindset and raced off. As we came through Cattedown I found myself leading, with a few riders following closely behind encouraging me to keep up the pace. We continued through Saltram and up Plym Valley, before turning into Cann and cracking on with the timed section.

The course led us around a few steep and rooty trails in Cann. Annoyingly I mis-read the course tape on one of the descents, sending me back up a steep climb and looping back on myself, losing the lead and several places in the process. Reaching the fire road at the bottom after realising my previous mistake, I worked hard to regain my position towards the front of the group, settling back into second position before the next section of narrow trail.

After this, we arrived at the first challenge of the day; “Bitch Hill” as it’s known on Strava. It’s a relatively short but very steep climb, kicking up to around 35% gradient towards the top. I could see leading rider Sam Pantling reaching the crest of the climb as I looked up from the bottom, giving me something to chase. Not realising this was one of the 3 challenge sections I rode right past the marshals at the top giving out the points – oops!

I finally caught up with Sam as we left Cann and we rode together through Shaugh Prior towards Dewerstone. On arrival we were presented with the second challenge, this time a rocky climb before continuing to climb up onto open moorland. This time the marshals stopped me at the top and points were obtained! 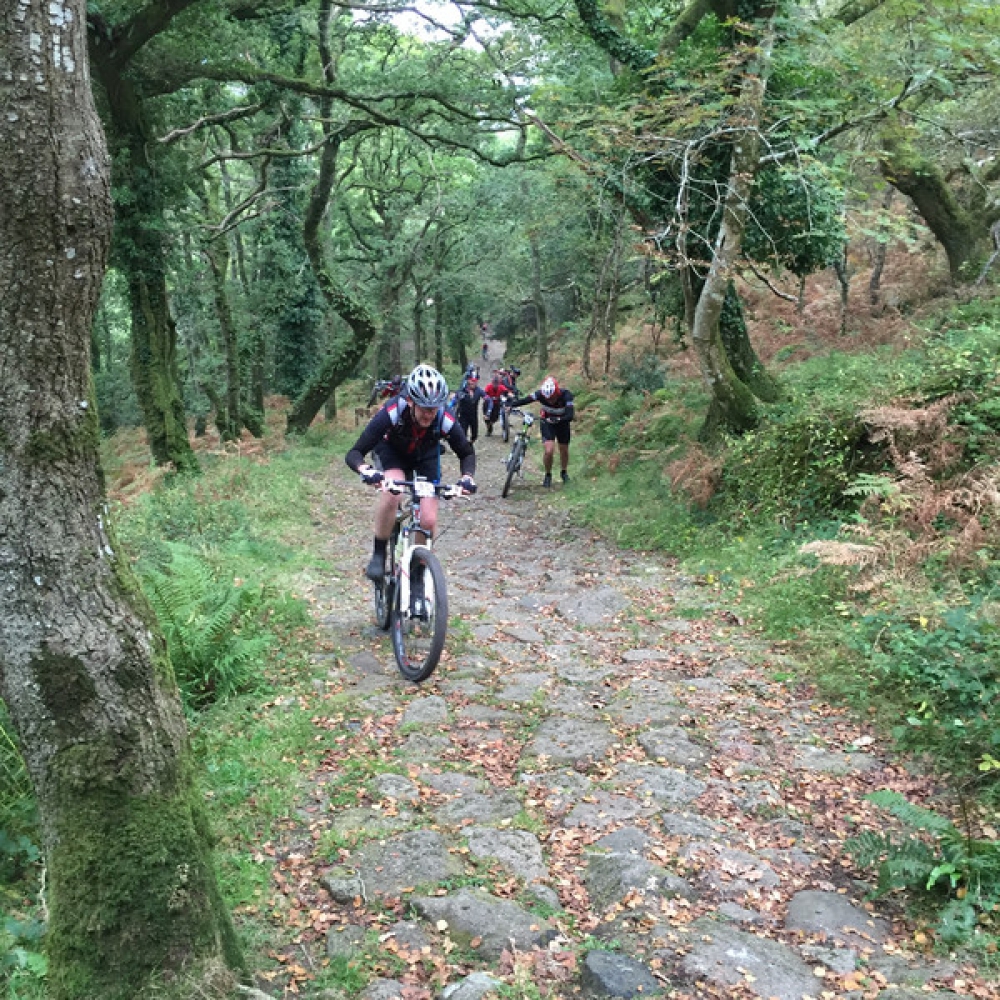 Here, the fun began to wear off a little as signage became increasingly poor. Instead of clearly visible arrows, the course was marked sparsely with stands of white course tape knotted and dangling from a few bushes, but on a bleak Autumn morning these weren’t easy to spot which resulted in a few wrong turns. We eventually managed to navigate to Cadover Bridge, and despite the feed station I still had plenty of supplies so pushed on.

We continued up a further climb on the outskirts of Lee Moor Quarry, before peeling off onto the moorland tracks on Lee Moor where things became very wet and muddy! We came across a rather boggy section, which was tricky to navigate across. Spotting some white course tape higher up, I headed for the higher line in the hope it would be firmer rideable ground, however Sam kept to a lower line wading through the bog, and reached firm ground sooner, shooting off into the distance as I continued to get wet feet!

I spent the remainder of the time riding solo, around Hemerdon Mine and into Newnham Park where the third and final challenge of a river crossing and steep climb were presented, before a nice section of wooded singletrack led back into Cann Woods. After riding a few of the familiar trails, the course came back to the start/finish control point, and the timer was stopped.

Sam was still long out of sight as I rejoined Plym Valley and headed back to Rockets and Rascals. That was until I was riding out of Saltram and heard another rider behind me – to my surprise, I turned around to find he was chasing me down, after somehow getting lost in Cann! I was beginning to tire by that point, and despite attempting to give chase he powered on ahead as I had nothing more to give. To make matters worse, the swing bridge on the Barbican closed on me just as I got to it, leaving me waiting around for 5 minutes whilst boats left Sutton Harbour!

I eventually made it across the bridge and was second rider back to Rockets and Rascals. All in all it was a great morning of riding and a good chance to put my new bike to the test over a lengthy distance as well as riding some local trails that I don’t get to ride very often! Looking forward to next years event to round off the 2016 season!

The post Hell of the West appeared first on Luke Kendall.