Luke Kendall recently wrote about his first 6 hour solo event at Brighton Bigdog. he's shared his thoughts below, did anybody else attend?

Taken from Lukes own blog: http://www.lukekendall.co.uk/brighton-big-dog-6hr-solo/

With the local XCO race season now over, and TwentyFour12 successfully done, I was intending on spending the following 5 weeks solely focusing on training ready for the upcoming Wild Welsh British Cycling Marathon Championships at the end of August, without the interference of resting, racing and recovering. That was until Carla Haines asked if I fancied heading to Brighton for the Brighton Big Dog 6 hour solo race, and after thoroughly enjoying the pain of racing 12 hour pairs at TwentyFour12, I thought, ‘why not’?! It’s all good training right?

After heading to Brighton on the Friday afternoon and camping overnight, it was a relief to wake up on Saturday to a glorious sunny day – dry trails, yesss! We arrived at Stanmer Park around 9:30am, and after signing on, getting ready, and attempting a practice lap (the course was still marked for the junior race and we got a bit lost!), we killed some time doing skids and wheelies waiting for the race to start at midday.

Unfortunately in an instance of poor planning, I found myself at the back of the portaloo queue as people began to take to the start line around 11:45am, and as I lined up myself, I was pretty far from the front row! The klaxon went at 12:00, as hundreds of riders funnelled around the start arena loop and into the first grassy climb. Then the natural congestion occurred as we headed into the first singletrack section, as the leading riders shot off into the distance whilst we battled to just keep moving!

The course was awesome fun, and varied enough to not become boring after 6 hours of repeating laps. It seemed to have the perfect balance of climbing and descending, giving riders the opportunity to recover whilst blasting down snaking, dusty singletrack, and then being fresh enough to tackle the often rooty climbs that would follow. There were also a few technical features to keep things interesting, mostly in the form of log drop-offs and jumps, with a few doubles thrown in for good measure.

Given the upcoming Marathon Championships, my main goals for the race were to practice both pacing and nutrition strategy. With most XCO races only lasting around 90 minutes, and with TwentyFour12 being relay based with rest periods between laps, this would be the longest non-stop race I’d done to date. As such, gauging how hard to go was tricky, but after the first lap I’d managed to settle into a comfortable pace, maintaining fairly consistent lap times within just a few seconds of each other and not feeling overly fatigued in the process.

As usual, the climbs very much played to my strengths enabling me to make ground on riders ahead, although after a couple of laps I found myself getting pretty comfortable on the descents too, taking them a lot faster than expected. Of course, there were still a few skilled riders blasting past me at the speed of light!

As planned, after three hours, my bottles were empty and I’d run out of gels, so I took a quick 60 second break to switch bottles, scoff an energy bar, re-stuff my jersey pockets and set off again. 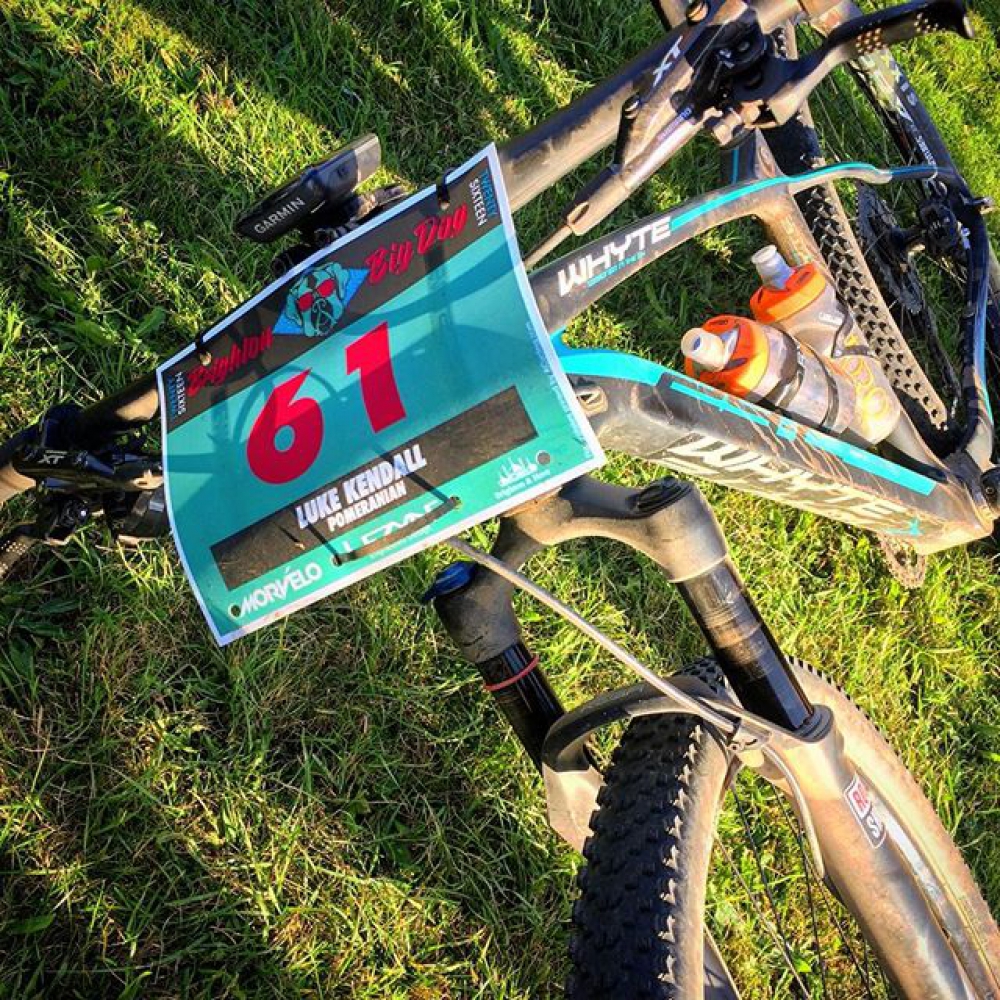 As time went on, fatigue obviously began to grow, but I managed to keep my lap times fairly consistent. The biggest set back was the pain I started to experience in my feet after a couple of hours, as they began to cook themselves in the heat, with the pain seeming to come and go throughout. Having to walk part of a steep loose climb after losing traction was agony and not something I wish to experience again anytime soon! Time for some better ventilated shoes I think!

At the start, it’s always difficult to establish who your direct competitors are (solo, pairs, teams etc), but in the later stages of the race it became more and more obvious who the non-solo riders were, as they blasted past with fresh legs and clean kit, with the soloists taking things somewhat steadier, with a nice even coating of dust over themselves and their bike.

Unlike TwentyFour12, with Brighton Big Dog, the clock stopped at 6pm and any laps completed after wouldn’t count. As a result of this, the last hour became a bit more lively, with everyone frantically rushing to complete their laps in a bid to squeeze in one more lap before the cut off. Knowing I was lapping in just under 40 minutes, I crossed the line around 5:10pm, so headed out for a final lap knowing I could safely squeeze another in before the cutoff, and finally finished just before 5:50pm after completing 9 tough laps, taking 8th place out of 54 other solo riders. At this point the adrenaline began to wear off, and everything slowly started to hurt!

The Brighton Big Dog was an excellent race, and definitely one I’ll be adding to next year’s race calendar. A big thanks to the organisers for such a well run event, and also to the marshals hurling friendly abuse at us on the course and keeping the spirits high! Extra kudos to the marshal playing the ukelele for six hours straight at the bottom of the first climb who made me chuckle every lap!