I have been meaning to write this article for about four weeks now. I have had lots of words zooming round my head and spoken to lots of different people gathering as many different opinions. The topic that has got me going is the state of XCO courses in British mountain biking.

As a rider I put in a lot of hours, money and effort into not just getting fit but also improving my skills. I have a fitness coach who sets my fitness regime and I have a skills coach who sets an equally tough skills regime. I have been working with Ian Warby of B1ke for around five years now. I say that he has made me the brave (sometimes stupidly so) technically adept rider I am today. The time and effort Ian and I have put in on working up to bigger, more taxing technical sections is endless. The XCO World Cups are getting more and more technical. It’s not unusual to find big drops, gap jumps and huge rock gardens. It’s not just happening at the top of the sport, European Series races are following in the footsteps and producing some amazingly technical and brutal courses. I need to be prepared to tackle these kind of sections this means putting in the work beforehand.

I had a break from XCO racing last year as I had become despondent with the events since they didn’t seem to lend themselves to my strength as a technical rider. I found myself watching enviously as riders tackled Hadleigh Park, a course renowned for it’s technical riding. I decided that my heart definitely lies with XCO racing and made the decision to come back to it this year.

The first round of the British Mountain Bike Series was at Pembrey Park, South Wales. It is a country park that is flat and near the beach. I had fully accepted that this was not a course for me, it was too flat with no technical features. So imagine my excitement when I saw photos of a crazy looking drop on the events Facebook page. Maybe this course wouldn’t be so bad after all. At least I could make up a little bit of time on a course that wouldn’t suit me. I arrived at the course so much more excited than I would have been. I headed out on the practice lap with butterflies in my tummy. I walked the drop and it was as big as the photos suggested. For the first attempt I popped my saddle down to give me the confidence to ride it smoothly and I did just that. It was ace. Putting my saddle back up I went for a few more runs. I was confident to ride it and felt it was a great addition to the course. It may sound harsh but I liked that there were some of my competitors avoiding it. The B-line gave you a significant penalty as they should; I knew I could make up time in this section.

In our team this year we have a selection of ability in mountain biking; there’s me obviously, Adel who is concentrating on Enduro and DH so is technically very good but lacks some experience, Emily who has been riding MTBO so isn’t as technically confident as Adel or I and Nat who has just started and lacks some confidence on the technical sections although is improving each round. It gives us a unique perspective I think as we each want different things from a course. I was the only rider going to be taking the drop at Pembrey. It was my little advantage over my possibly stronger team mates. So you can imagine that I was pretty gutted to find out that they had effectively taken out the drop. It had been lowered to become a roll off. Off flew any sort of technical advantage I had over my competitors. I know there were other girls in my category feeling exactly the same. The word was there had been too many incidents at the feature and it had to be removed. To say I was grumpy was an understatement. In the end I had a good race finishing in 5th place. It left me wondering though how I would have done had the technical feature been left in. At this point I had assumed that it was the British Cycling Commissaries that had made the decision to take it out.

A couple of weeks later I headed to the Nutcracker Series race at Dalby Forest which promised to be raced on the World Cup course. Dalby is one of my favourite courses, it has a huge climb which means some wicked descents. There are two infamous technical features; Worry Gill – a near vertical drop with a tight right turn into a rocky gully and Medusa’s Drop – a rooty, rocky tight descent. With there being a National Series round later in the year at the course I wanted to remind myself I could ride the sections and also have some fun scaring myself. I arrived to find out that both features had been taken out of the course as well as a rocky step up. I was also told that they were unlikely to be in for the National Series round. Now after a three and half hour drive I was pretty grumpy and on my practice lap as I rode past the two sections, I won’t mind admitting, I had a little tear in my eye. There they stood, some ace sections just aching to be ridden. I know the organiser James Hall quite well so decided to ask him why he felt the need to take them out. He really surprised and sadden me with his reply.

“The reason we have felt the need to take out the sections is that there is a high probability of people crashing, this leaves us open to being sued. These events do not make much, if any, money and in our opinion it is just not worth the risk” 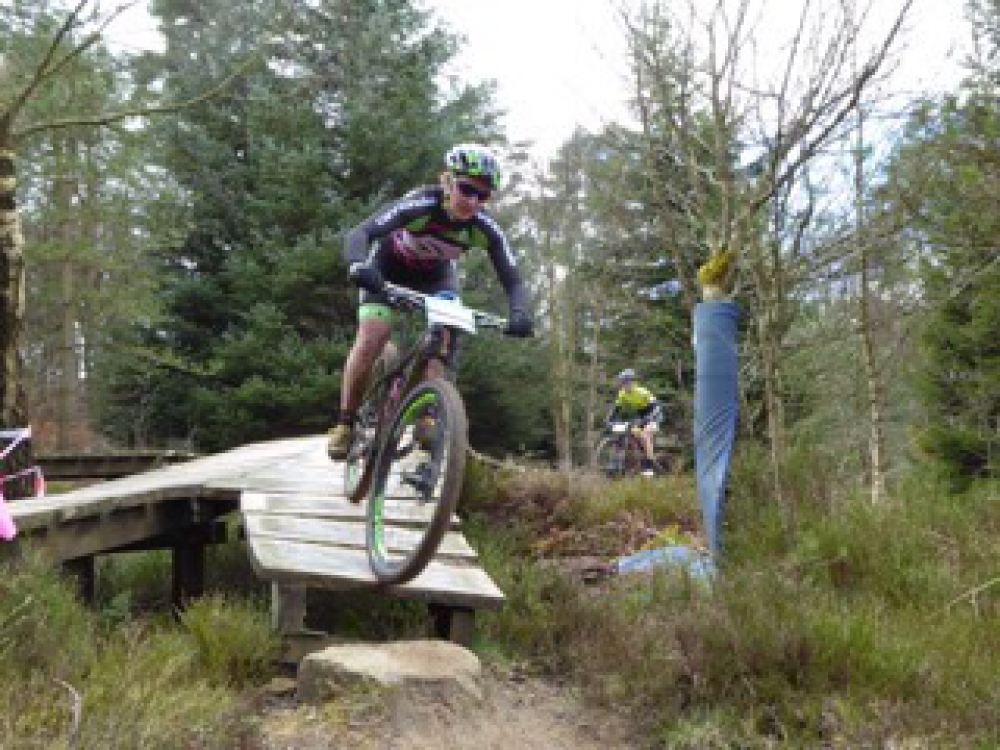 Is this what is stopping British courses from following Europe in pushing the technical boundaries? The riders themselves? Do people really think about suing an organiser if they get hurt? It would never cross my mind to. As soon as I step on to my mountain bike I know I am taking a risk. That’s one of the reasons I do it; it’s what gives me the adrenalin rush when I get through a section in one piece. I can tell you I have had my fair share of pretty awful crashes. I have scars and misshaped bones all with tales to tell but I can honestly say I have never thought of blaming anyone but myself. It turns out that it wasn’t British Cycling Commissaries that took the drop out from Pembrey but the organiser. I haven’t spoken to the organiser himself but it was suggested to me that it was for the same reasons. What a sad state of affairs if all this is true.

I suggested to James that maybe making the harder lines Elite only but I guess that would disappoint some riders in the lower categories and also some Elites cannot ride those sections either. I pointed out that that was what B-lines were for and perhaps even C-lines need to be introduced. I also asked for a B-line to be introduced on the climb perhaps one that goes round it. I’m not a good climber so to make it fair, as my advantage has been taken away, perhaps the less technical but strong riders could have theirs taken out too.

So this brings us up to today, I am now sitting here after a weekend at the second round of the National Series at Newnham park. I have bruises all over my legs and I am still smiling. The course was immense. Brutal climbs and awesomely technical descents. It has fully restored my faith in XCO racing. Maddie and Jay Horton put hours into making a course that tested the best riders, they provided excellent B-lines which riders were able to take. I saw some crashes in practice and also tonnes of smiles. Maddie was constantly reassuring everyone that there was no harm in taking the B-lines, there’s no loss of face, no one will call you a loser and if you’re strong elsewhere you’ll make the time up. It was a real mountain bike course, one that prepares you for the higher levels of racing. I hope they got lots of good feedback and everyone enjoyed it.

I understand not every course can be like that and I’m not asking for that but to have technical features there and not use them I cannot understand it. I feel like I’m being penalised for being a strong technical rider. In practice at the World Cup level I can assure you there are many, many crashes. People are sporting bandages and blood, it’s very normal. The course remains as it is and no one complains. The jump from our National series to World Cup level is huge. Would it not benefit riders if it wasn’t? If we could have courses like Newnham to improve riders and make them better equipped to perform on the world stage perhaps we would have more British riders taking on the rest of the world.

This is mountain biking not a knitting competition. If you can’t tackle a section, rather than complain about it, get yourself booked in with a skills coach. I know Ian and B1ke would be happy to help.