A few weeks back, a bike box landed at the gateway to Castel de UKXCNews.com that was a little smaller than usual... What lay inside this little (actually, not really that much smaller) box was the 2015 Dawes Academy 20 MTB; part of the Dawes 'premium' range of kids bikes aimed at the budding cyclist/racer.] 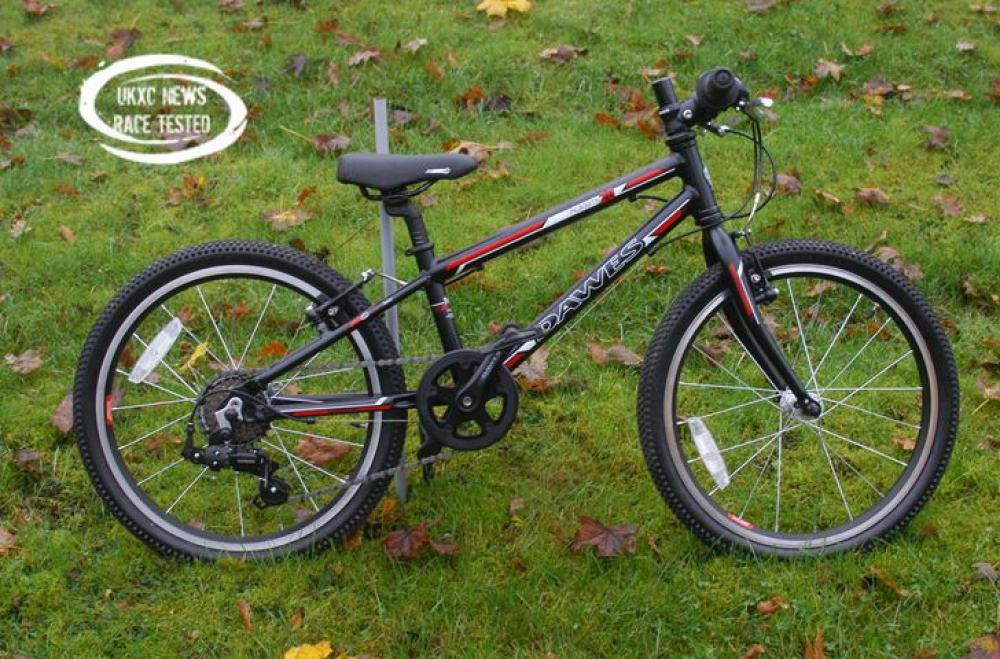 So to start, the Dawes Academy 20 (denotes 20” wheel size) is a good looking bike, gasps from the eager mini racer as the gloss black frame with colour matched fork emerge from the box confirm that Dawes have the look of the bike about right. Let’s face it; being able to turn heads in the playground is important with any kid’s bike so Mission 1 accomplished. As I mentioned, this little bike is from Dawes Academy range and with a RRP of £299, it pits itself against some stiff competition within the premium kids market. So how does it stack up?

The rather nice 6061 triple butted aluminium frame (9” if you're wondering) and rigid chromoly forks give a fairly light yet sturdy base to proceedings. More sub 24 inch wheel bikes are appearing with suspension forks but the benefits are questionable, with lighter riders not carrying the weight to activate them and the additional bulk hindering climbing and acceleration. The Academy 20 felt more nimble with the lighter rigid fork.

A smattering of Shimano gearing graces the Academy 20, with the RD-FT35 Short Cage rear mech handling a 14-28T 7 speed cassette. Smaller hands are given full control with a Shimano REVOShift system that clicks through the gears with ease. This system was new to our young reviewer but he mastered it in seconds. The single 32T front chainring has a double guard to ensure the KMC chain stays in place. XC racers of all ages are opting for a single ring setup for weight and simplicity. The Academy 20’s lowest gear combination handles most situations although a larger sprocket would provide a bail out gear on steeper tracks. 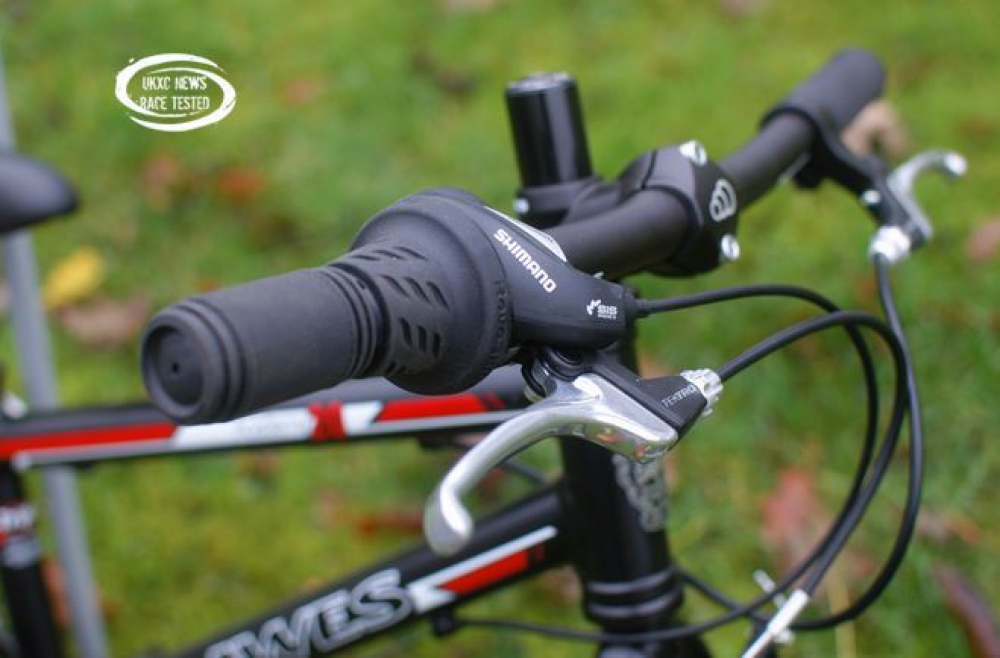 Good fit and adjustability are behind the steering setup with an alloy 480mm bar held in place by a Dawes 1" A-Headset and 50mm reach 'Infinite Height Adjust' stem. This provides easy, one-bolt height adjustment out in the field. With the seat height adjusted and rider happy, the stem adjustment was set low (just like Nino) but after a few minutes and with a few steep looking drops on the horizon the stem height slowly came up to a more comfortable and natural position providing the rider with more confidence in tricky sections.

The 20” wheels are of a 20H, sealed Alloy, quick release hub variety and the double walled alloy rims do an admirable job of holding the pacey and quick rolling Dawes Academy Cadence 20 x 1.5 tyre. Now the tread on the Dawes Cadence tyre is something to note, we tested the bike during a fairly dry autumn day and it offered good grip on leaf and damp root laden singletrack. Wet, loose chalky tracks proved to be more tricky, but that may be down to our little racers over exuberance and overconfidence from the grip found earlier in the day. Tyre choice is difficult on children’s bikes, having to cover such a wide range of riding surfaces from tarmac on the school commute to muddy race courses. The Cadence tyres fitted have a good contact patch and should handle most scenarios with only particularly wet days beyond their ability.

Another important consideration is whether the bike is future proof? To a certain extent, yes it is. The 9” frame provides plenty of standover clearance and the chance to get a smaller rider on bigger wheels. Combine that with a 250mm seatpost and the adjustable stem to accommodate growth or conversely the potential to readjust down as the younger generation move on to older siblings’ kit.

So how did it actually ride? Our young review has just been promoted to 20” from 16” hoops and found the added ability to roll over roots an immediate advantage. The speed difference was unquestionable and this all factored in to the giant grin plastered across his face after a few hours in the woods. Drops and sections he paused on previously were conquered without fear, the shifting became second nature very quickly and he found the 28T rear and 32T front a leg friendly combination when things started heading skyward (or when the Haribo fuel was running a little low). Weighing in at just 8kg's this little whippet is easy on smaller arms and we even experimented with a little Cross' carrying! 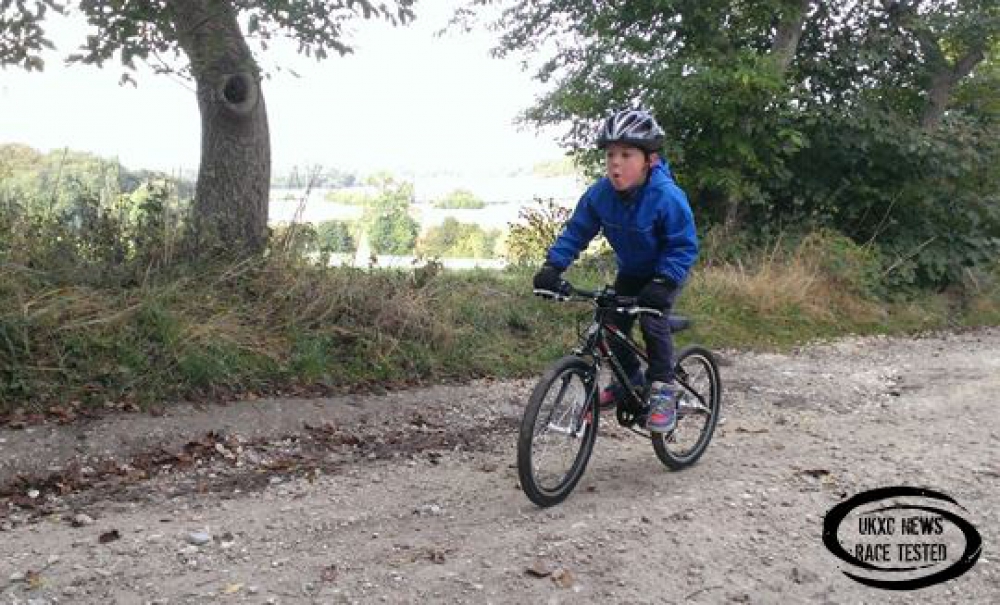 Unfortunately, our young racer was ill for the last race of his season so we never got the chance to really test the Dawes Academy 20 with full race face, but from our adventures around the UKXCNews test track, we can say that confidence and a new found enthusiasm was flowing from every pedal stroke!

In summary, a very nice bike that's well worth it's place within the premium kids bike range, and with wheel sizes ranging from 12" to 26" (a road variant is also available in 24" and 650c) the Dawes Academy Series is a great alternative and well worth checking out!