Back in 2015 I was riding a KTM Aera 29er HT built up from the frame but as my focus was drawn to longer marathon and solo endurance events, coupled with being rear-ended in my car moving over to a short travel XC orientated full suspension bike made a lot of sense.

Being a brand ambassador for KTM Bikes UK and riding for KTM Impsport Race Team the natural choice was one of their excellent KTM Scarp 29’er, a race orientated XC full suspension bike with 90mm of rear travel and 100mm up front.

I had a chat with the guys at KTM Bikes UK and we went down the route of a custom build, having an affinity for Shimano shifting and braking kit and rather fancying a pair of the cool looking Rockshox RS1 USD carbon forks this was the best way to go. 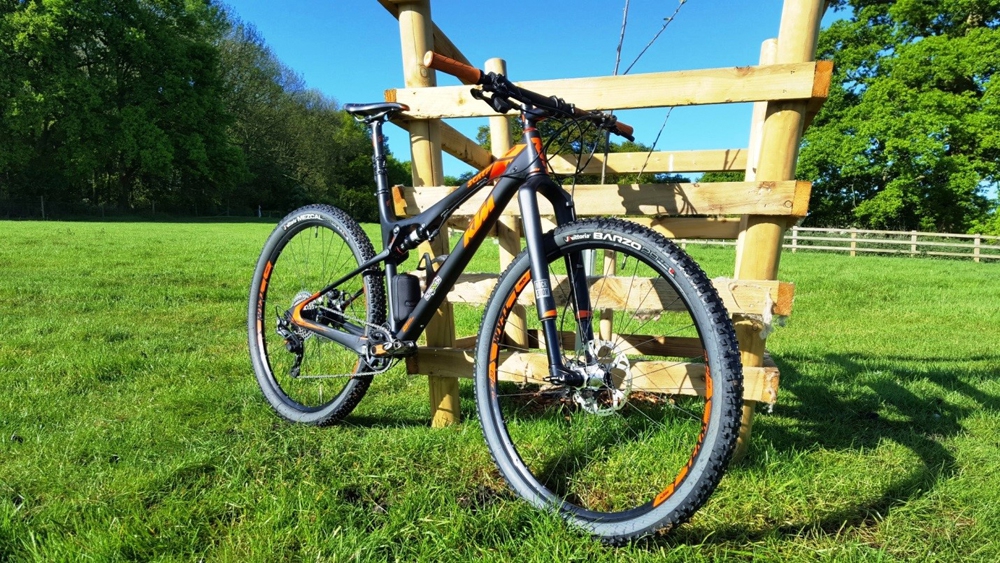 The Scarp has KTM’s Straight Line Link (SSL) rear suspension where the linkage & shock are driven in a straight line funnily enough by the rear triangle, which has no pivots at the axel end and relies on the flexing of the thin seat-stays. The shock is a Rockshox Monarch XX with the hydraulic lockout and this is paired with a set of the USD Rockshox RS1 forks giving 100mm of travel, again with a hydraulic lock-out which handily is a combined unit and cable free so no chance of sticking or breaking cables. 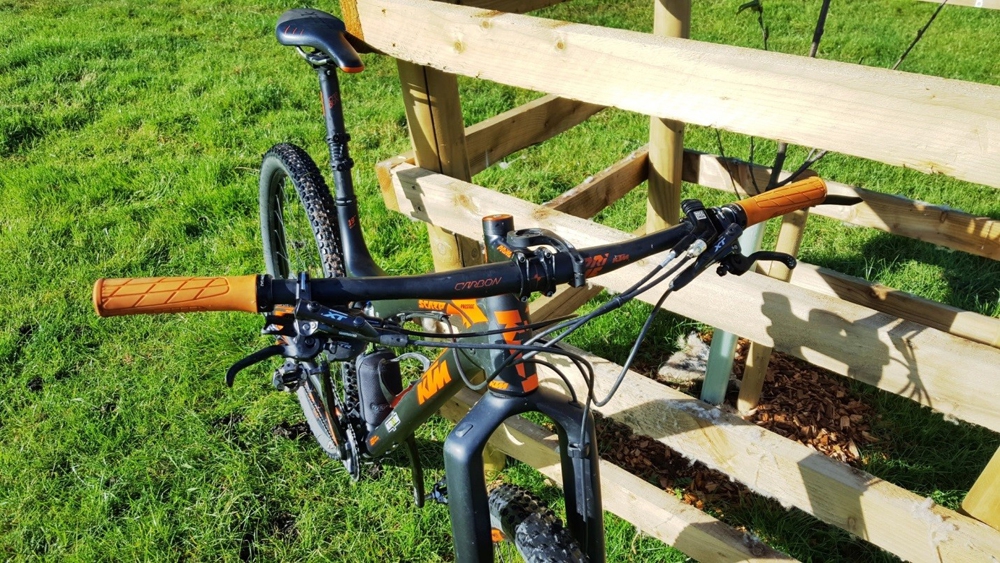 Shifting, moving and stopping duties are taken care of with a mix of Shimano XTR M9000 & XT M8000. The bike is set up in 1x11 mode with and XTR shifter and rear Shadow + clutch mech, the cranks are XT which normally run a Shimano 32t ring, but I have ran a 30t for 24 hour racing, using a Shimano Xt / Ultegra chain to drive the XT 11-42 cassette, with a  set of the ubiquitous XT M8000 SPD pedals to make sure my feet don’t fall off the pedals. 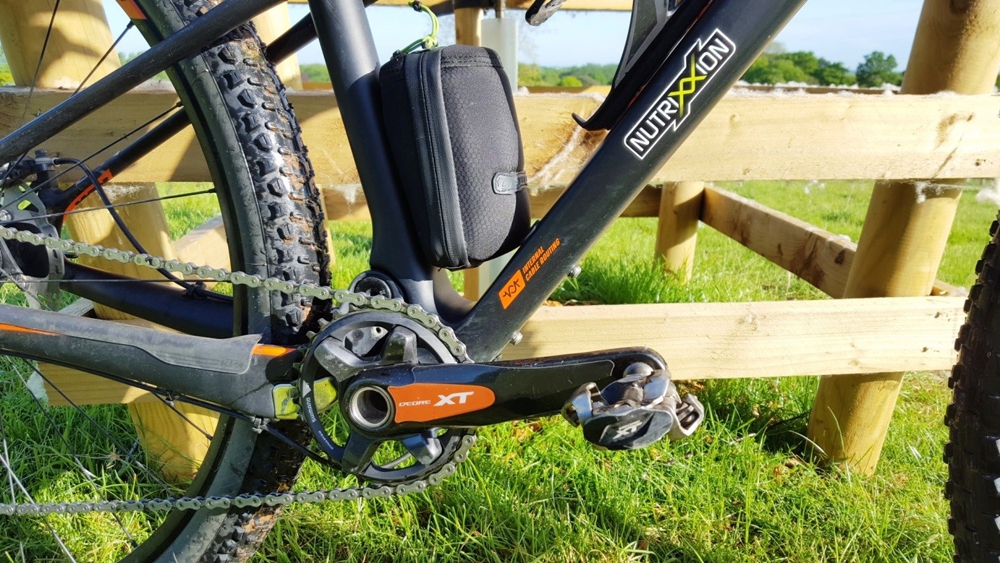 In case you’re wondering what the little black case is on the seat-tube, it’s a Syncros bidon bag and has all my spares stored in it out fo the way of the grime. The usual stuff, innder tube, multi-tool, C02 canisters and chuck, self adhesive patches and a couple of quicklinks. It’s permanently attached to the bike so I can’t ever forget anything!

Wheels and tryes are taken care of KTM factory team rims (re-badged DT Swiss XR331’s) laced to DT Swiss hubs with 350 internals, the front being the RS1 specific predictive steering boost variety and the rear 148x12 boost. Tyre wise, unless is particullarly muddy I stick with a Vittoria 2.25” Barzo TNT up front and a 2.25” Vittoria Mezcal TNT out back. If it gets a bit squelchy I’ll swap to another Barzo out back, I find the Vittoria’s really reliable and more than fast enough. 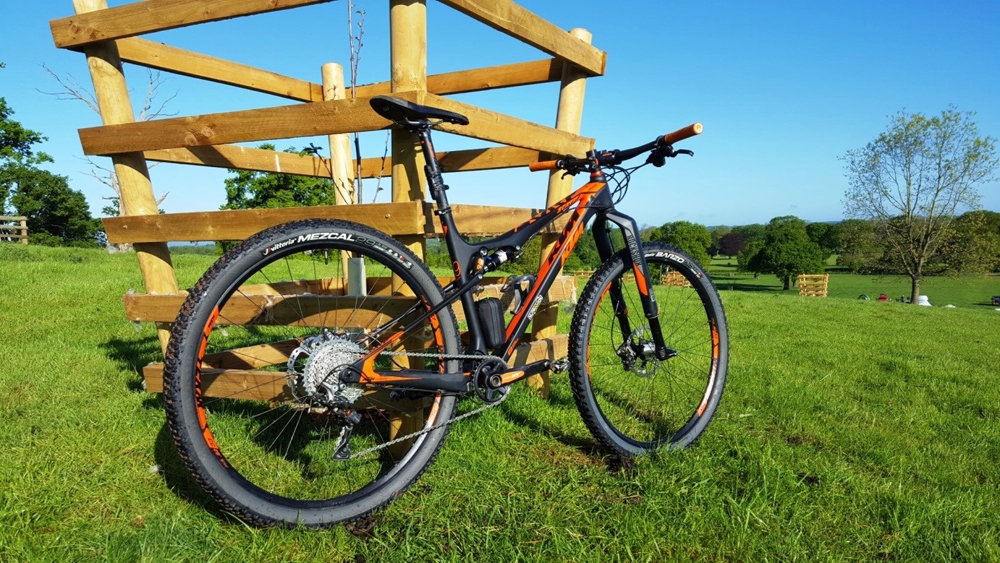 Finishing kit on the bike is taken care of by KTM Bikes with a set of their Prime flat carbon bars in 720mm bolted to an 80mm alloy -7deg Prime stem and a set Ergon GA2 ergonomic grips. My saddle of choice is a Fizik Tundra M5 with the manganese rails, all nicely colour matched and bolted to a KTM Prime layback carbon post. For longer rides (or those events where the feed station placement is a tad questionable) there’s an adapter on the seatpost to bolt a 2nd cage too allowing me to carry two 750ml bottles, it was only a couple of quid from Decathlon and does the job nicely.

A little finishing touch is the Slik Graphics Crank skins in nicely coordinating orange, necessetated by the somewhat baby soft finish of the Shimano cranks and my rather heels in pedallign stance, they keep the cranks looking fresh and are a bargain to boot.