Anyone who's ridden or pitted for someone at a 24 hour race knows that they are complete roller coasters of highs, lows, disasters and moments of elation. The World Championships in Finale Ligure, Italy definitely delivered a Big Dipper of emotions for the Brits who made the journey with the promise of awesome dusty trails, ice cream and chaotic organisation aplenty.

I've had a good last few months of training and worked hard to get down to race weight which is always a bit of a challenge. Give me 6am turbo sessions any day over missing out on biscuit consumption.

After buying a new house that requires more than a little renovation work, I've managed to combine 10 hour training weekends with equal hours of DIY. At one stage I even started putting DIY in my Training Peaks to track the sheer exhaustion! However I came in fresh and feeling decent which was great.

As in 2015 when I did the European champs here the course wasn't marked properly even the day before so nobody had ridden the course fully and at worst a few people got lost. Things didn’t start of great at the airport when I left my ‘Button Hole’ branded chamois cream in my hand luggage, some funny looks and then I had to go and buy some containers to decant it in to for the flight! We flew over and hired and car which turned out to be a VERY small people carrier for 4 people and two bikes! We were pitting with my buddy and Singlespeed legend Steve Day under the watchful eye of our coach Jon who had taken the time to drive Steve across and also to be there to support his other athletes of which there were quite a few! 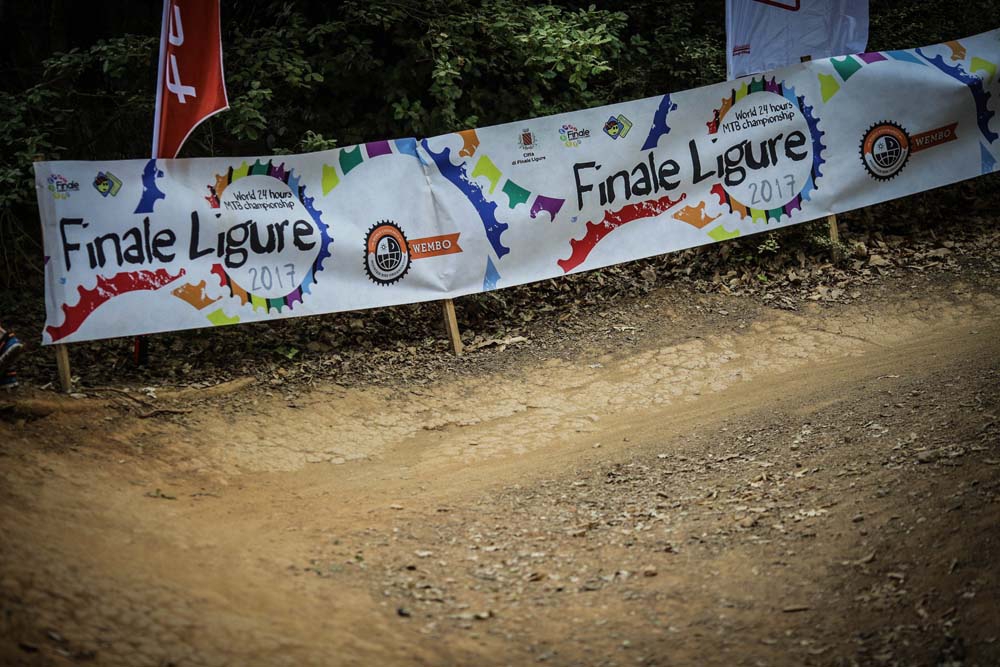 Practice day didn't entirely go to plan and not just with the course once again not being marked properly a la 2015 Euros. I snapped my seat clamp bolt whilst building the bikes up which created a bit of extra faff and stress. 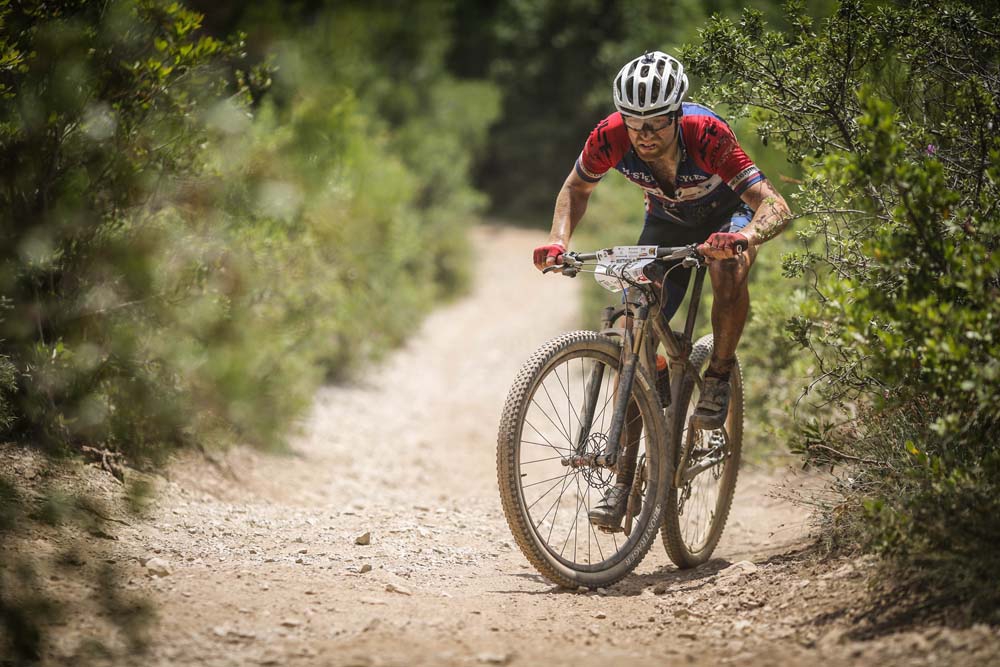 Melting in the heat up the steep stuff[/caption]

The course was a real test of willpower and strength with unrelenting climbs and descents on rough stuff. It was so dry that dust clouds formed and braking bumps on narrow singletrack trails were savage hour on hour. That core work on the floor of the spare bedroom was going to come in handy! 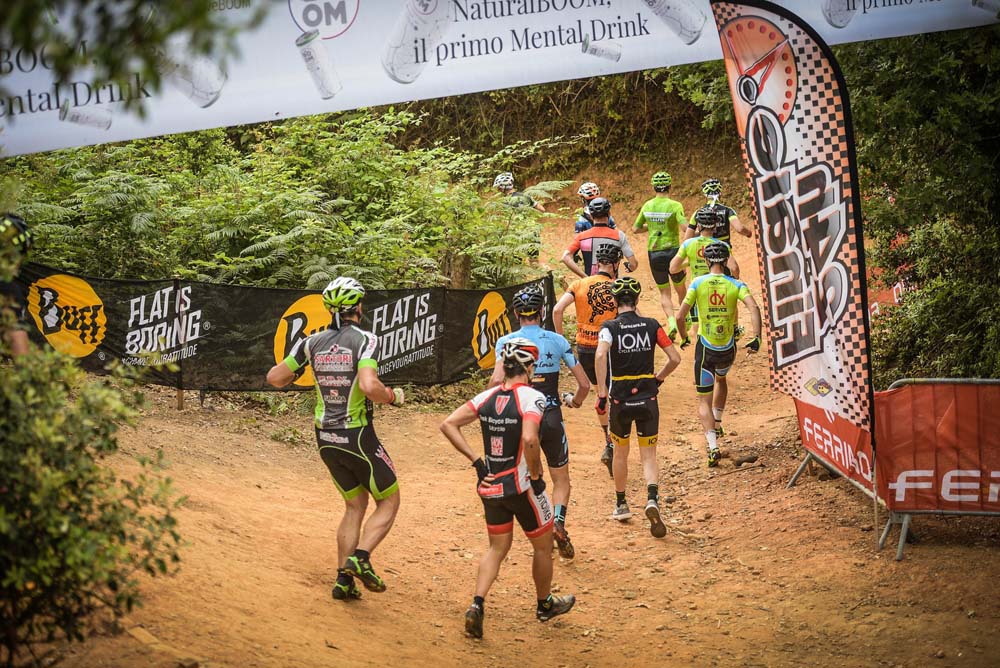 Ankle breaking time on the run[/caption]

The organisers had decided a bloody great big off road run would be a good way to start a race. Hundreds of riders in bike shoes didn't agree but I think the organisers like the spectacle. I lined up and found myself alongside the legend Jason English who received a hilarious pre race psyche out attempt from a previous event winner "hey Jason I won this event like 5 times", "oh ok then mate" I laughed out loud, the previous winner looked like he got the message. 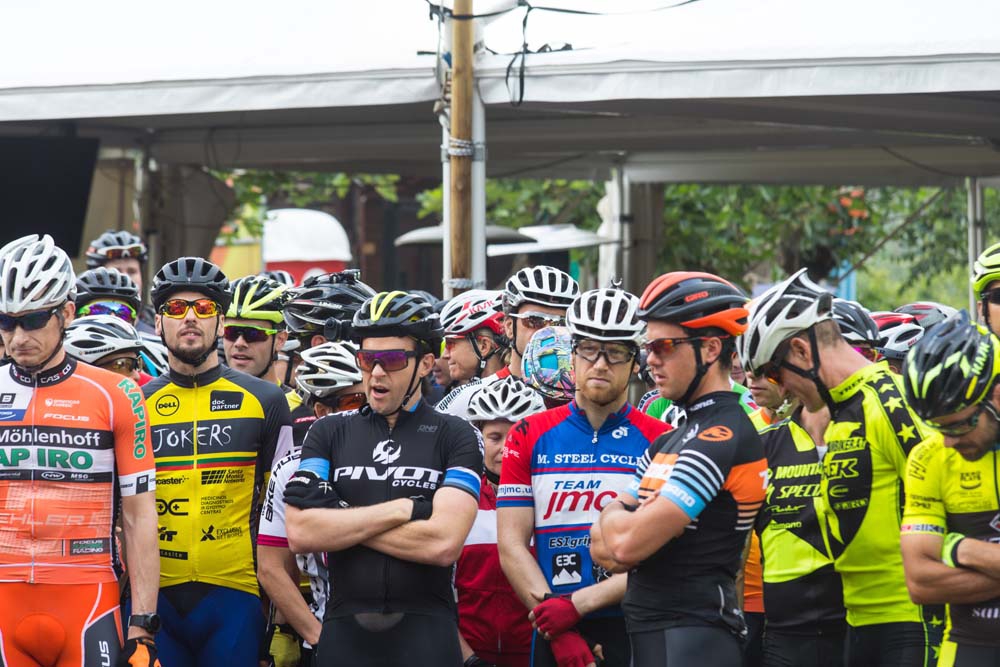 The organisers also thought it was a good idea for the front row to the run start to hold a banner up and then somehow be expected to magically dissolve this when the hooter went, it was perfectly placed for everyone to trip over when we set off!

Elbows came out as the hooter went and we bundled through the woods on a run that seemed to go on forever. I haven't run 20 feet let alone several hundred meters in years due to horrid tight calves so I wasn't enjoying it one bit. Same for everyone though. The final run based insult to injury was that once we jumped on the bikes eventually we were then held up by the back end of the age group runners so had to weave and shout our way through those blocking the path. What a shambles!

Me and Steve got off to a decent start and shared most of the first lap. Coming down the final descent the roar of the crowd was massive and half distracted me and I went face down whilst taking an inside line on a berm. 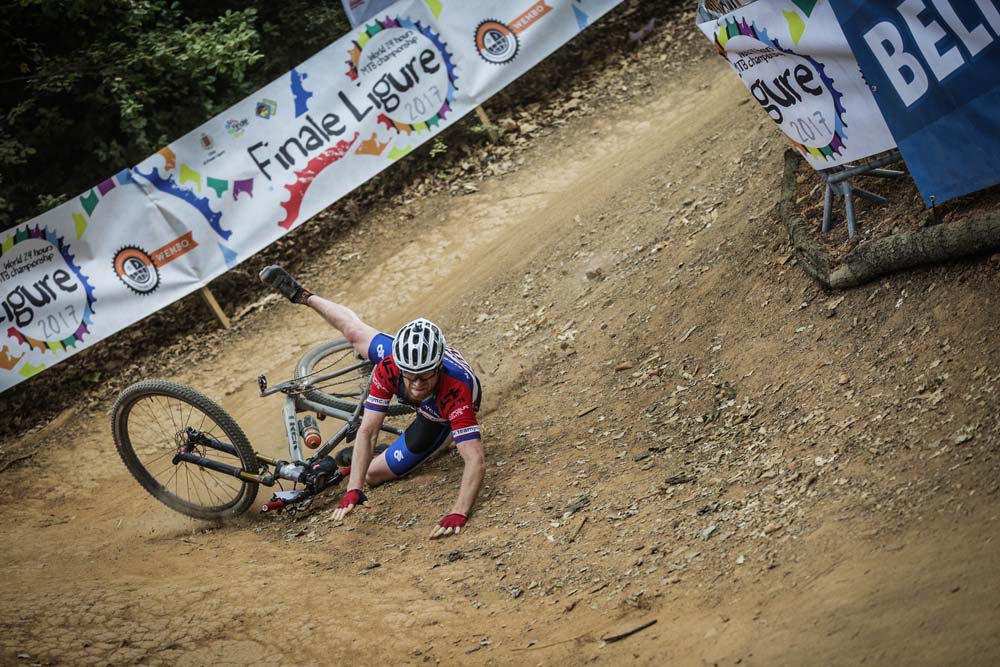 Not ideal for lap one, having a cheeky little lay down[/caption]

I am no Sam Hill it turns out. Bars twisted and blood spurting all down me I wondered whether it might be a long way for a short outing. Picking myself up I straightened the bars, surveyed a bent brake lever, what an idiot. The adrenaline pumped though and next time through the pits I gave my arm a scrub that was a slurry of blood and dust and cracked on. This course was bound to deliver more pain than that anyway I reckoned.

Despite the scorching heat I was going well and feeling pretty decent. Bikes were working brilliantly despite having bent a brake lever in the first lap crash. My arm and side were still seeping blood though, hopefully I wouldn’t lose too much! 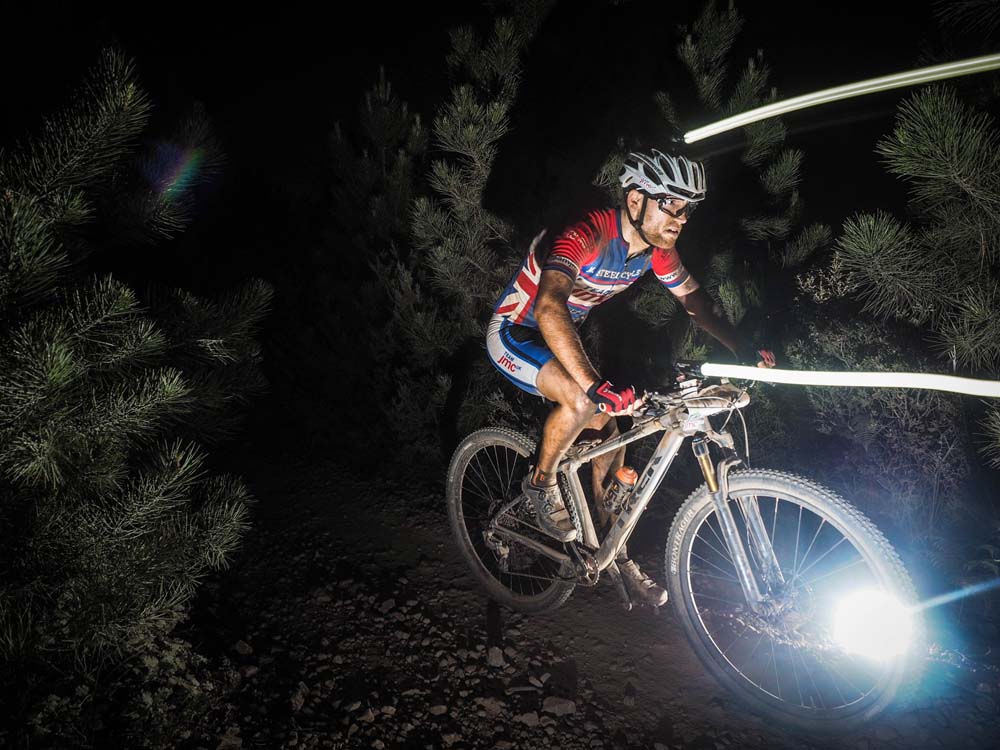 Course was epic even more so at night[/caption]

Getting toward the night it didn't cool off that much but I was still making good progress and had been as high up as 5th overall I think. There were lots of Brits out on course all supporting each other brilliantly whereas you didn't get so much as a peep out of the locals for some reason. It was really tough out there lap after lap battering riders and many were pulled over in heaps or passed out in the pits. I saw Keith Forsyth in a right state from heat exhaustion whilst I picked up Manx man Gary Kirby off the floor at one stage.

After 10 hours the course was a lot quieter and the on course hold ups that wound me up a bit early on reduced as people threw the towel (mostly wet ones over their heads to cool down). If you got to the end of this one you were doing well at whatever speed.

The 'live' timing was shocking and pit crews were getting very annoyed with the lack of info and this in turn frustrated riders. For a world champs this just wasn't good enough for riders and their supporters who put so much time, effort, money and passion in to get to these things. I fed back about these issues in 2015 but unfortunately it seems little attention was paid.

Something then happened to me which I still can't quite get my head round. I ground to a near halt as my head totally went and I just wanted to curl up in a ball and go to sleep. I then battled with my mind for the next few hours as we got in to the last third of the race. I tried to keep going despite wanting to quit every time I came through the pits. My pit crew said I was totally incommunicable and couldn't figure out what had happened. They tried their best to pick me out of the hole I had dug for myself but it was down to me to grab the shovel or lie down and let myself be buried.

Stood trackside crying for reasons I didn't really know why was a tough place to be. Riders streamed past me including age groups as the tears streamed from my eyes. For some reason as I slowed to walking pace I didn't listen to my pit crew who were telling me that I was still in the top 10 elite despite mid 40 minute laps turning into 80 minute rambles! Fellow Brits did their best on course to keep me going. Every lap I had the words of “I'm stopping” ready to deliver to my guys, I didn’t want to let them down though.

The sun came up which didn't have much effect but then the strangest thing happened. I saw a lady struggling to fix a puncture with snapped tyre levers. In my head I thought I had dropped so far down the field I might as well stop and help, It wasn’t like I was losing anything. We spent a while sorting it out getting the tyre off her super skinny rims which was a nightmare but got her going again. I felt a little bit better after that and came through the pits. Off hand I enquired where I was to get the response “about 10th”. Oh something still to ride for, how can that be?!

The lights came back on, legs fired up, the cloud lifted and I went off like a rocket for four of the strongest laps I've put into a 24 hour race. Seeing Charlie Lees who was supporting Naomi out at the event running along the trails was a real boost. In a 24 hour race you experience such emotions that even little things like bumping in to a unexpected friendly face out on course can make a massive difference to your spirits. I unlapped myself from a load of people and grabbed a place back in elite and probably a load more overall as I seemed to be overtaking people like they were stood still. I crossed the line having emptied the tank and a bit sweaty. I could have carried on like that for another few hours I reckon, shoulda, wudda, coulda!

Not having quit was the main achievement of the race for me, well above coming 9th elite. I finished well down the order overall as age cats seemed to be filled with riders who should really be in elite having been top 10 in previous worlds. I'm not driven by a will to win so it's not like I'm disappointed about the placing more just that I clearly had the legs for it but let myself down on the mental game. I’ve been there now, taken a bite of that sandwich, swallowed without vomiting and ploughed on through to dessert. I know I can get through the darkest of moments so I’ll draw on that in future (I hope).

The masses of Brits that made the journey had some great results with many winning their categories and placing well overall. Most of these will be at the UK 24 champs at 24/12 in 8 weeks time so it will be yet another battle royale amongst a very evenly matched and strong UK riding scene at the moment. The ride of the weekend for me went to Andrew Howett in difficult circumstances yet again on a 24 hour singlespeed podium. He just never stops turning the pedals and is the most polite person to pit for you will come across which is an achievement given the stress of racing one of these things, fair play.

New and old friends gathered in the main square that evening to raid the ‘Apertivo’ buffet which was all you can eat for 5 euros with a beer! We cleaned them out of course. Somehow despite only getting 30 minutes nap after the race I managed to stay awake until 1am led astray by the Scottish boys (who stayed out until 3am!!). 10 pints and a kebab, job done. 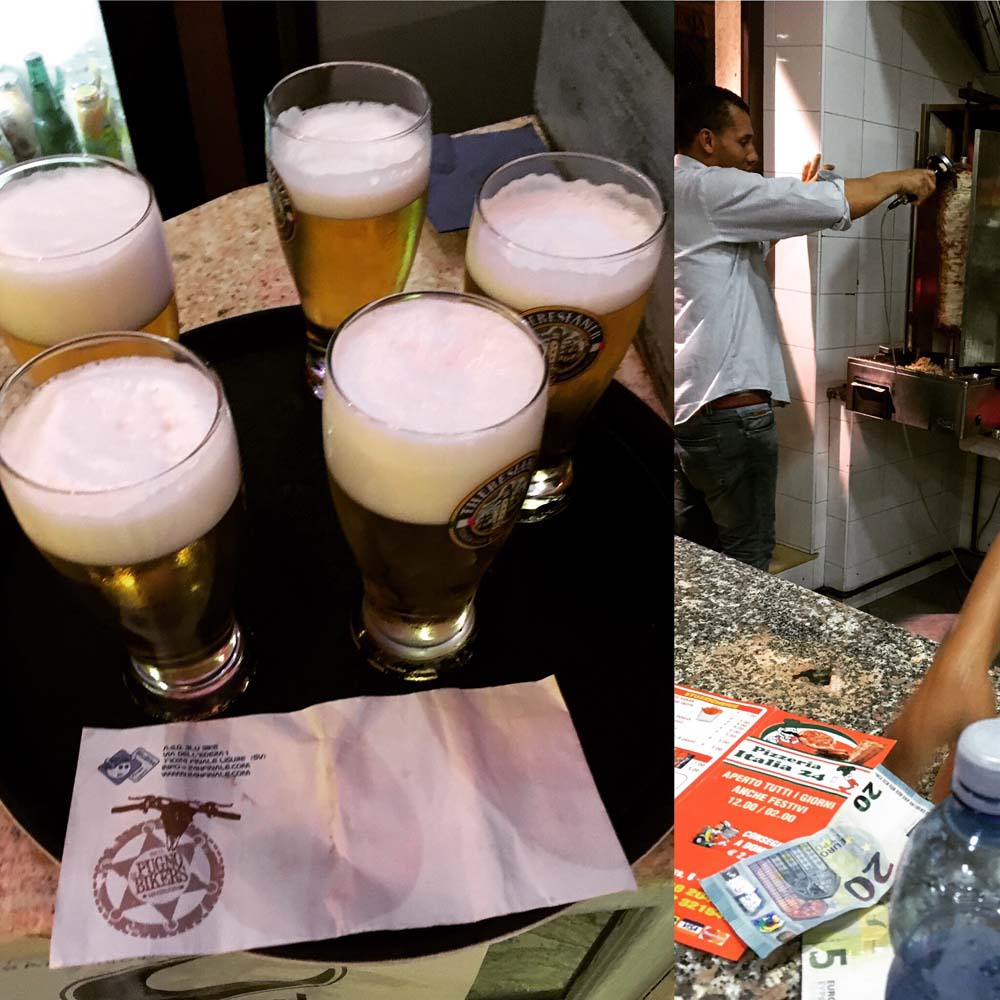 What can you eat after 24hrs of racing? pretty much anything[/caption]

At the moment I'm disappointed my head went which is very unlike me. You learn something from every 24 and if that comes again I will know I can get through it. I feel motivated and fired up again already to go out and smash one of these things out of the park. Time to get grab that shovel and shift some dirt.

As ever a massive thanks to all my sponsors, supporters and everyone that makes our sport brilliant.