The Crocodile Trophy has everything you could ever imagine riding on a mountain bike – steep descents, long climbs. Technical singletrails, wide open roads. Rocky and sandy sections. Rainforests and bush. Outback and beach. Rain, mud and heat. There is literally nothing that mountain biking includes that isn’t in this race


I’m sitting in Cairns airport the day after the final stage of the Crocodile Trophy - I leave with bags of coffee from Skybury <http://www.skybury.com.au/> (yum - Mel will be so happy to see it when I arrive out to her with it), a few bits and bobs from the race, a minor cut below my left knee (why oh why, always the left knee) but more importantly a bunch of great memories from my two and a half weeks racing, riding and enjoying North Queensland.

The final stage of the race will surely become an iconic one in years to come. Basically we have an individual time trial (I don’t think some folks knew that this means no drafting) of 15km rolling dirt roads followed by a 4km rollercaster descent aptly named the Bump Track, a little flat around the suburbs of Port Douglas followed by a 4km sprint across the beach. Have a look at the strava file - it looks cool. 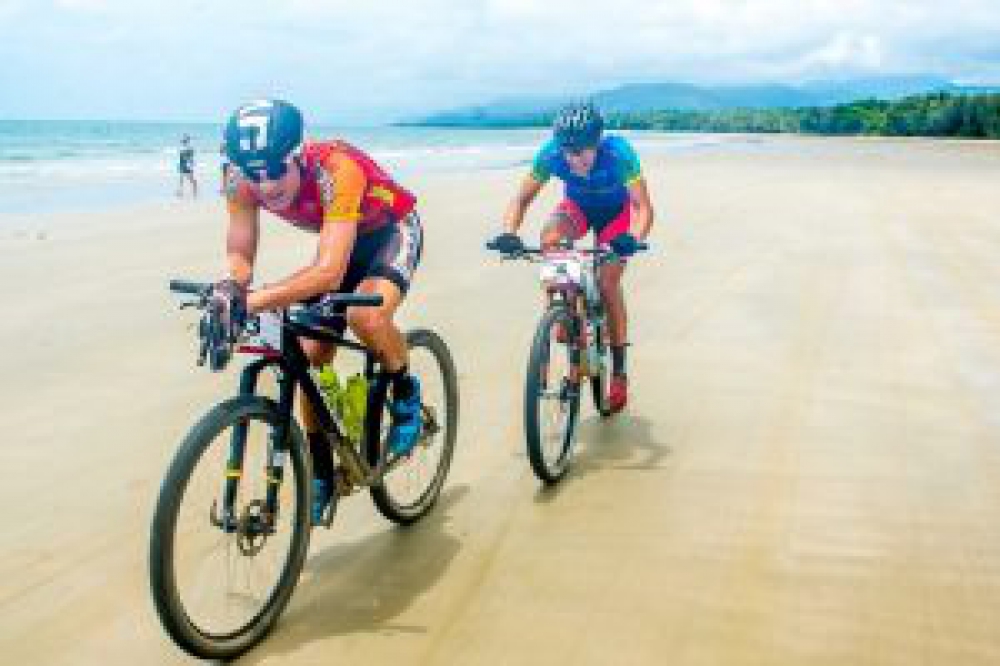 Like every night here I slept like a baby (one of the good ones, not the ones that wakes up every 2 hours) and woke at the usual 5:50am (it isn’t as bad as it sounds - you go to be at 8!). Due to tides, our start times were much later than the usual 8am and we had plenty of time to chat, relax and do this unknown curiosity called a warmup.

Finished with no new scrapes Mel will be happy to know.
As my race started I got into it pretty much perfectly from the start - one last effort to end the season was the motivation but I still wasn’t going to go nuts on the Bump Track (I like my mostly healed skin on my left knee) - easy to land in the bushes on that one as many riders found out. The race through the suburbs of Port Douglas was a little crazy but that was all forgotten when I hit the beach. Man, that beach is long I thought as I could barely see (a mixture of sunscreen, sweat and salt water leaving me half blind) - I rode as steady/hard as I could to the finish eventually seeing the large red finish banner. I finished empty to be greeted by Stewart and his family at the line. My time was the fastest at that point but showing the quality if the field Urs who won the stage went over four minutes faster breaking the course record by four minutes… And we didn’t even have the usual strong tailwind! Crazy crazy strong.

As I mentioned at the start, from the time I picked up mountain biking I always wanted to race this race - it has changed a lot since then (Mongolian Challenge is probably more similar to the old Croc) but remains a fantastic race with a mix of all types of riding.

It's all done for Ryan Sherlock[/caption]

Swiss Urs Huber claimed his third Crocodile Trophy victory. With a seventh stage win on the final day at the 21st Crocodile Trophy the Swiss Urs Huber claimed his third race victory since 2009 and 2010. Soren Nissen from Denmark claims the second place ahead of Australia’s Marathon National Champion, Brendan Johnston from Canberra. Nicholas Pettina comes in fourth overall and the young Austrian Lukas Islitzer in fifth. Sarah White from Cairns (AUS) takes the win in the Elite Women’s category on the podium at the breathtaking Four Mile Beach in Port Douglas

Today’s time trial stage started the rider field in reverse order of the general classification onto undulating, historic gold rush mining trails and then down the infamous “Bump Track” into Port Douglas, which is a very steep and technical descent through the dense rainforest surrounding the popular holiday destination in Tropical North Queensland. The race leader Urs Huber was released last and said that he knew he had a healthy gap and didn’t take any risks on the rough descent. He won today’s stage in 54:24minutes, breaking last year’s record time by almost four minutes. 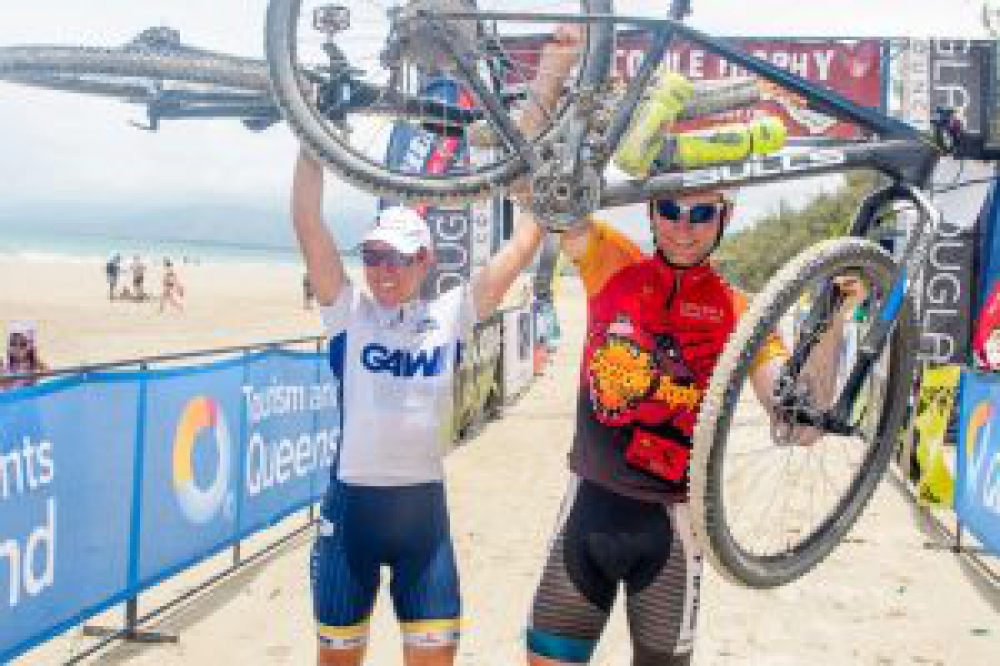 "I'm really happy about my third victory at the Crocodile Trophy. This race has changed so much since I won it last in 2009 and 2010”, Huber said about the event that was founded in 1994. “Nowadays you really have to be a complete cyclist to win this event - you must have the skills and strength to do well on all terrains: singletrack, rainforest and bush trails and the wide open Outback roads”, he added and explained that to win you had to be an all-rounder and be able to deal with race tactics, especially on the later and longer marathon stages. “Of course the conditions in Australia are always a challenge, but exactly what makes this race so unique!", Huber concluded.

In second today was the Italian Nicholas Pettina (+1:28.1 min) and he claims the fourth overall placing in the race. “I’ve had a bit of back luck and lost a lot of time, but I’ll be back for sure, I know now what it takes to do well at this race”, Pettina said.

Today’s third-fastest time was clocked in by the event’s Best Australian Brendan Johnston (AUS, Canberra) with a gap of +2:01.0 min. Finishing third overall in the strongest elite field in the history of this legendary race he said, made him proud, "This was the hardest race I've ever done and certainly the longest stage race. I’m still young and it was a fantastic experience to race with such strong racers from all over the world. To race onto the top-three podium, I'm happy with that."

Sarah White from Cairns is the elite women's champion in 2015, finishing in 36h56:30 over the 9 days. “I really enjoyed this race, my first stage race. I’d love to race it again and would love to see more women in the field.
It’s a tough race, yes, but absolutely doable – to win so close to home makes me really proud”, the steadfast ex-ultra marathon runner said. 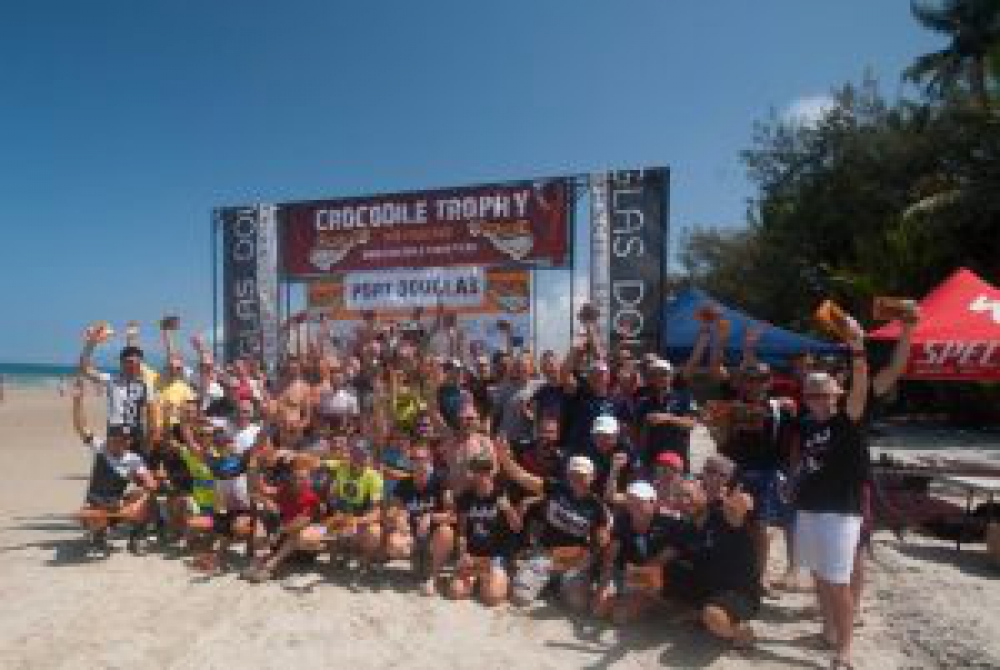 From jungle to bush to Outback to beach The final kilometres were be raced on the sandy beach, right on the water
and for many riders the start in the jungle around Cairns seems long ago. Since last Saturday they raced in on the Atherton Tablelands’ MTB Park and rainforest surrounds. For stage five and six the Crocodile Trophy raced in
the bushlands, mining country and the Outback in the Irvinebank region before arriving at the tropical Skybury Coffee Plantation on Friday. Last night the set up camp at the historic Wetherby Cattle Station and for the second time in the race history, the event finished on Four Mile Beach in Port Douglas.

More details about the race here