It has been amazing to watch just how this event has developed over its past 5 editions. From humble beginnings with a cap of 270 riders, it now welcomes nearly 550, with a good number of elite riders and strong riders across all other categories. Its popularity and renown is such that it now sells out in days and Specialized have come on board as tech support.

It may have grown, but it retains its friendly and intimate atmosphere with everything based out of the local hotel. It is quicker to get to than some Scottish races and it has all the riding ingredients as a top event that will leave you smiling, and hurting, by the end. The race is a never ending rollercoaster ride of rugged ups and downs through the forest trails of the Ardennes. A real mix of every type of trail keeps you focused, from narrow, steep singletrack, rocky, occasionally muddy, but mostly dry and fast, to wide open farm tracks which roll across the open hill tops with amazing views of forests and trails all around. It may only be 3 days, but you'll come back satisfactorily tired! 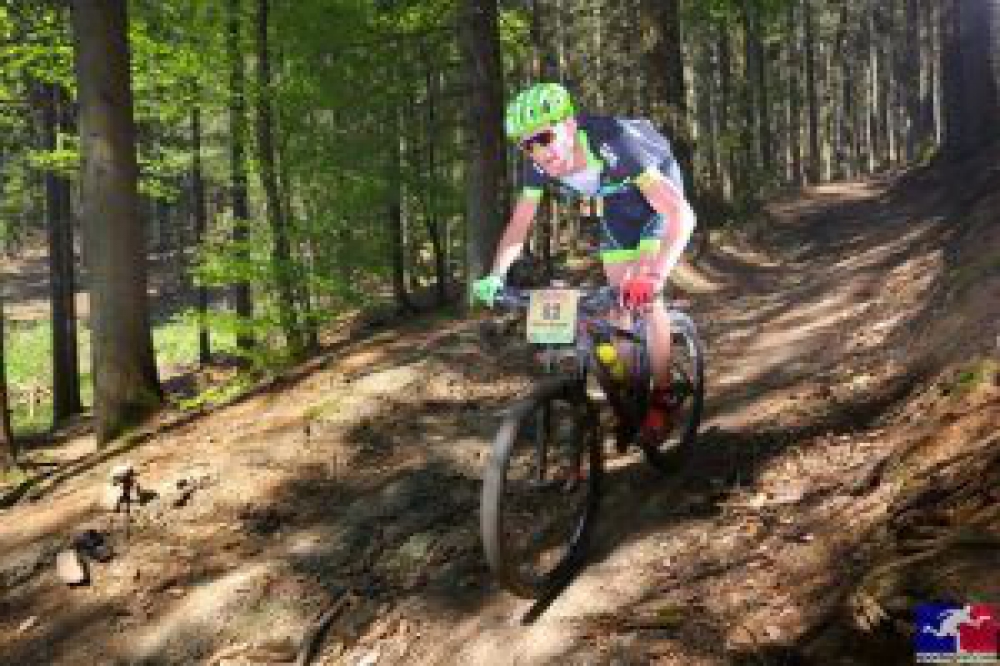 There is little in the way of free kms. It is either up or down, most of it steeply! The infamous Wall of Borzée trail spikes heart rates early on on stage 1! It leads in with rooty, rocky singletrack, the gradient ramping up as the trail widens, tyres fighting for grip in the last few metres, a classic point for photos and race video. Just smile through the pain! The route goes up twice on stage 1 , which may only be 67km, but it packs a punch with 2250m+.

For each stage there is no pleasant roll out either. The various categories gather in their respective pens; Elites up front, then Master 1 (30-39), Master 2 (40-49), then the 'fun' open category. On the start line it is all smiles as riders gather outside the Town Hall for the start of stage 1, but within 500m of a frantic ride through the winding, narrow town streets, it all goes upwards, steeply, out of town, before the climb slackens, only a little, and it's into the forest. 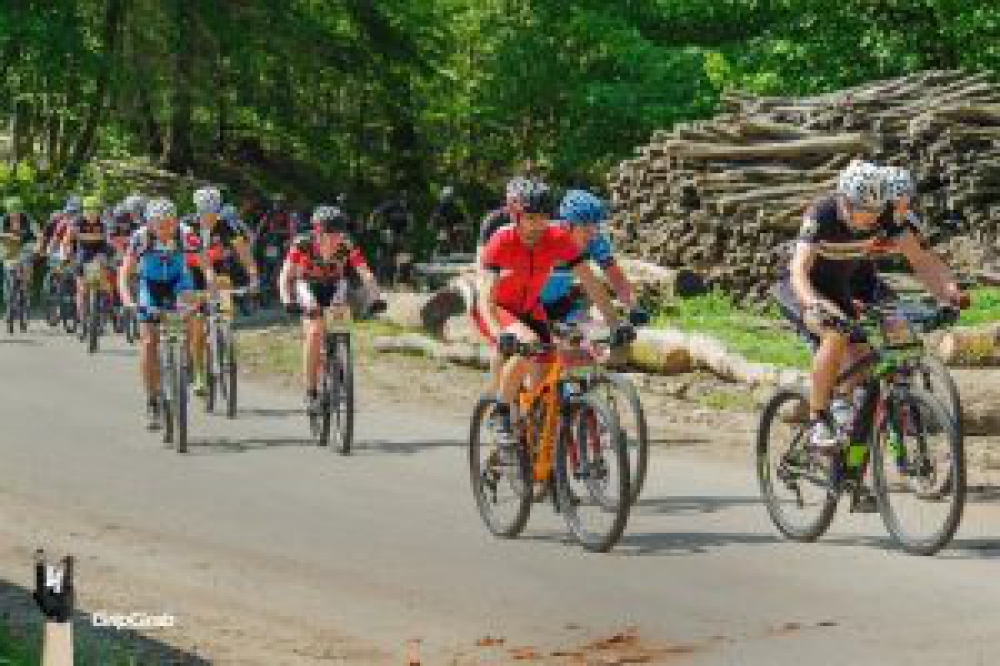 If you have the legs, it is worth trying to forge ahead as once onto the trails there is a sharp right hander which goes up, rather unsurprisingly, steeply and it ends up being a hike a bike, just with the amount of eager riders and tyre grip at a real premium.

It was great to see such strong riders as Sally Bigham, Mel Alexander, Charlotte Davies and Ben Thomas (his 2nd time) coming out to take on the Euros. Sally coming back with a formidable win overall after losing 20 minutes to a mechanical at the top of the first climb on the first stage!

Trails were (mostly) dry but there were still plenty of river crossing. Charlotte Davies riding through[/caption]

Given the muddy conditions of the Houffalize marathon just 2 weeks previous, the trails were surprisingly dry and fast, save for a few sections in the densest parts of the forest. The weather played ball too for stage 1, shorts and jersey weather, perfect to topping up the sharp tan lines, but not so for stages 2 and 3. It didn't rain, so the trails stayed fast, but the temperature dropped into single figures with the cloud cover. As with any stage race come prepared for any weather, but it has been perfectly dry for 4 out of 5 editions, so far. 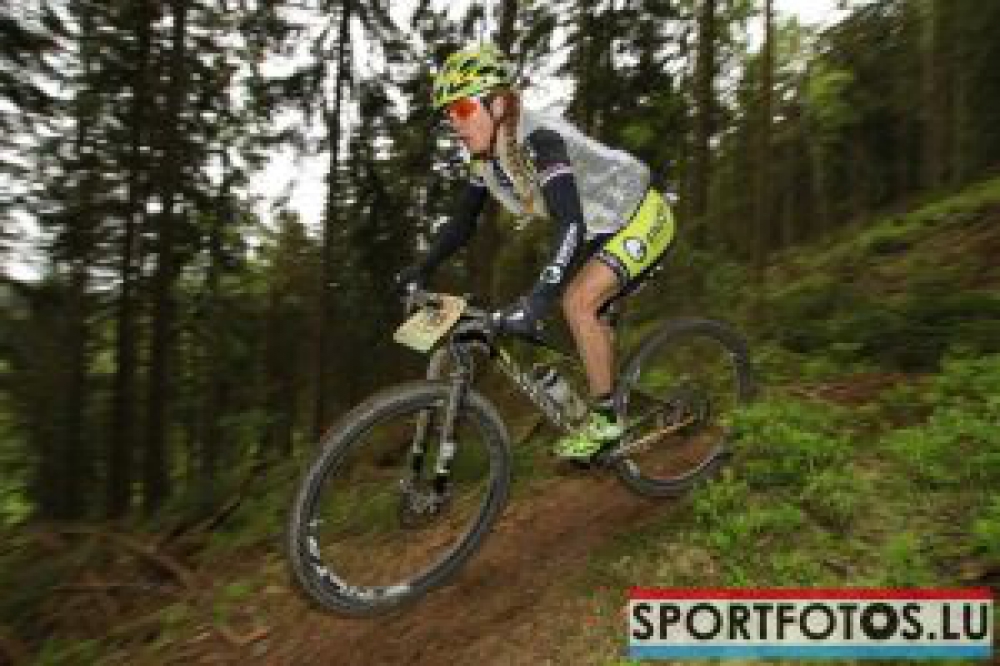 Stage 1 may be a little toughie, but it'll leave you wanting more, more of these winding forest trails. Stage 2 kicks out length wise to 95km, but for only 100m more climbing. Starting from the hotel grounds this time, there is no warm up as the speed from the gun is fast, everyone forging ahead before the route narrows slightly as the route heads upwards, the gradient a little more steady this time, but unrelenting for a few kms on sealed country back road before rolling onto forest track. 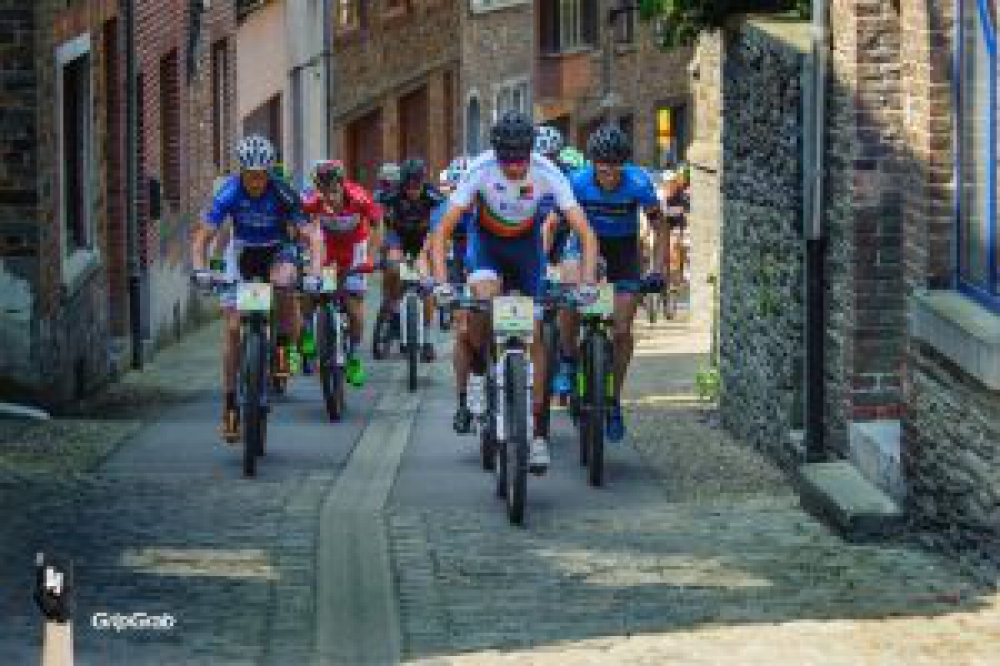 Heading out of town from the start. This is steeper than it looks![/caption]

Despite being 28km longer, it doesn't take that much longer to finish, the kms flying by on the rolling farm tracks high up in the hills, offering views across the Ardennes. Find a group up here on the exposed hilltops as the the wind will get you! The rest of the stage was just full of the xc trails we love to ride. 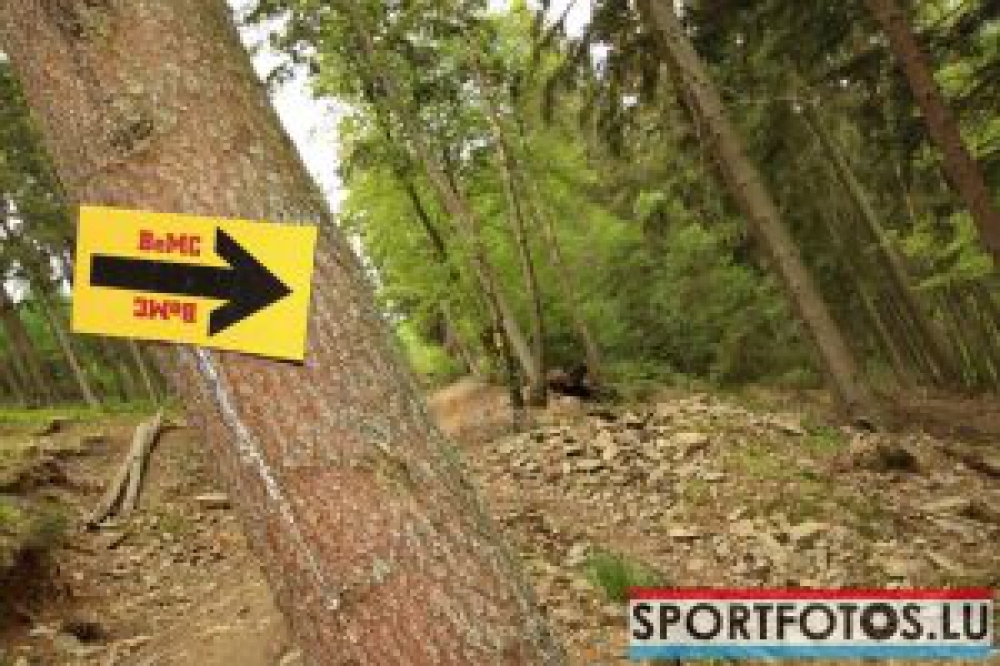 Stage 3 was the big one. 100km and 3100m+. No topping up the tan either, with the early morning temperature below 5 degrees. Brrrrr. And it wasn't due to climb much higher all day, but no bad thing, great trails were ridden and the terrain was mostly dry and super fast! There were some great steep descents today, some a mere narrow ribbon of single track, other sections parts of the local DH course and the xc course at Houffalize. Then there is that river crossing, a welcome cool off in the heat, some riders sitting in it last year, but we couldn't get through it quick enough this time in the day's chilly air! 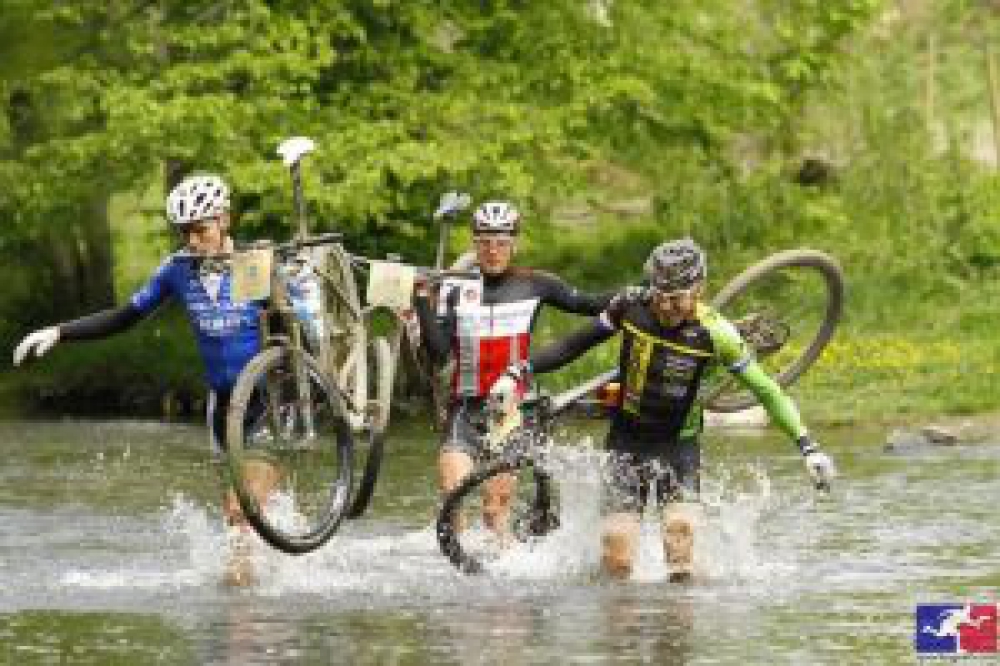 The superb descents always made up for the climbing, but there were some expletives expressed on that final sting in the tail.  A trail we had come down on stage 1, rocky and technical at the bottom, becoming narrow, steep and loose further up. Lungs and legs now at their limit. Reaching the same high point as stage 1 and 2, you knew that it was pretty much downhill to the finish from here, and a well deserved cold Belgian beer. Not quite under warm, sunny skies this time, wrapped up in down jackets watching other riders coming in.

There are a number of jet washes too, along with products from Bike7 to get the bike clean. The route is really well sign posted, but as with any event, don't simply follow the folks in front! Each well placed feed station is well stocked with sugary treats (the sweetened dried strawberries go down well) and products from nutrition sponsors Overstimms. Along with the now customary rice pudding and crepes, bottles of Overstimms with recovery product in are supplied. Just add water. At each feed station there is also a tech zone should the need arise. Got some non riding friends coming? Perhaps offer a bribe or 2 to hand out bottles at the feed stations as this the norm here for those vying for the top placings.

Sally pulled it back for a win in the elite women and Mel and Charlotte had a superb ride to be well in the top 10. Ben Thomas was just outside the top 10 each day. Bravo in such a tough field. For full results here.

It is an inexpensive race to enter and straight forward to get to. Early bird pricing applies too! Check it out; the BeMC

Mel and Charlotte after stage 1[/caption]