Thursday evening.  Motorhome packed, Scott picked up.  On the boat at 19:45, docking at 23:15.  An hours drive and then an overnighter outside Carlisle.  24 hour Tesco for the essential over purchasing of food and then here we come Fort William to the infamous No Fuss Events 10 under the Ben.  Arrived mid afternoon after a lovely lunch at the Real Food Stop in Tyndrum.

Essential natter with Spook and we were on Manx Mound just by the rocks of doom ascent.  Out with the Manx 100 gazebo and then finally, at last, perhaps we can get a lap in.  Not yet, as the remainder of the Manx Contingent turned up and more nattering and comments on the lap – awesome, mega, brilliant, were words used by all.  Genuine excitement and with the weather perfect for a late April event it was going to be bloody fantastic.  At last, a lap.  A tootle, don’t want to get everything too hyped up yet.  10 hours of racing tomorrow would be fine.  Evening meal, sign on, early night.

Porridge, and then the essentials.  Taking the mick out of the other lads, getting nervous and anxious as 09:30 came closer.  Asked Frazer to mention the Manx 100 at the rider briefing, he passed the mike to me…..  British Cycling National Marathon Champs over the 100km route, Manx National Marathon Champs over the 100 mile route.  16,000 feet of climbing and descending.  I could go on, and did.

As always on this event, it’s a self selecting peloton, so I put myself near the front, not to near, but not far away either.  Behind the bag piper as he slowly walks out of the car park always gets the hairs standing up on the back of my neck, and then the speed increases as we follow the motorbikes and the speed increases further until finally we turn right into the track and it’s a go.

The race is always a hard thing to describe, but on this shortened first lap, I was feeling pretty good, but obviously trying hard to ride inside my zones.  Yeah right.  I was 6th fastest solo over that lap!!

Lap 2, and the first full lap.  Around the far car park and through the stream crossing, with its spectators looking for the spills.  The fastest solo’s pairs and quads were already away so it was already thinning out and stretching.  Luckily no one stalled in front of me at the water. 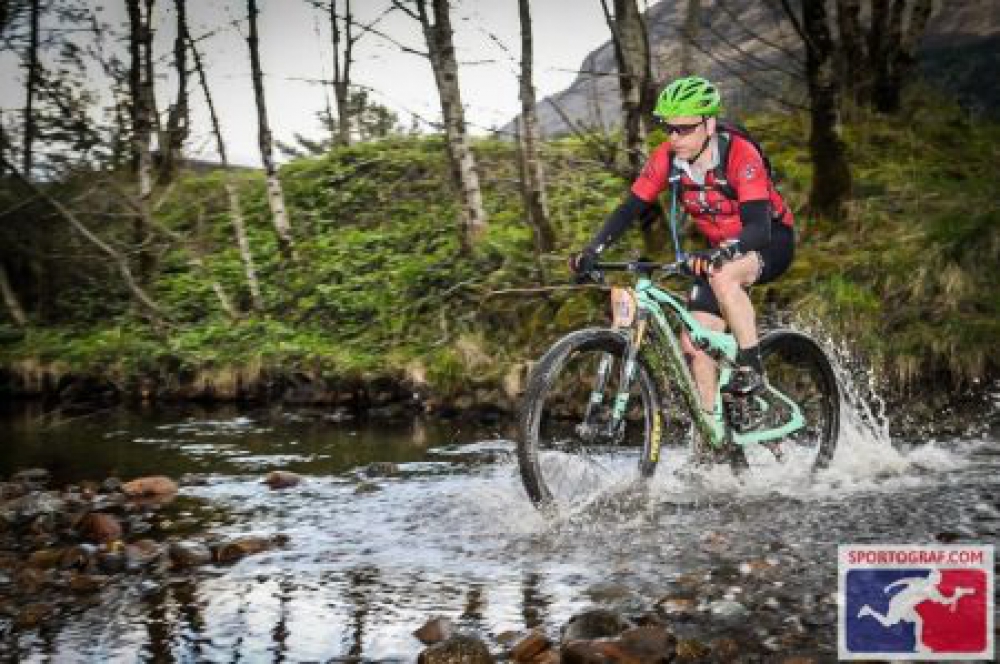 Then straight into some nice singletrack through some trees and down the steps and THE slab.  Only scared there once when the bloke in front of me got off at the lip as I was heading down the steps!  Some rolling fire road before one of my favourite sections.  Singletrack into the woodyard, just awesome.  Another great section cumulating in a slingshot downhill (bottle graveyard as the day went on) and an always hard to see left as your eyes rattle and then a right through some mud.  A few water splashes and then more singletrack downhill before a right turn onto fire road.  This begins as a rolling section and then turns right into a hill that only gets harder as the day extends.  It feels like Frazer and Spook just add a degree of two of incline after every lap.  Its hard to start with, but the suffering just keeps on coming.  A right turn into some more singletrack, deceptively uphill / flat / headwind every time.  It’s a bit that just drags for me.  A further fire road climb and then into an uphill singletrack climb that starts the adrenaline pumping as at the end of this is an awesome downhill section, bermed, rocky, fast, just great.  And back to the main car park.

Up the rocks of doom past Manx Mound!

Should have stopped for food.  Didn’t.  Annoyed with myself for schoolboy error.  As it would be another hour til I passed again.   Up some sections and the steep sandy climb and onto another favourite of mine, slightly downhill, fast as hell, and easy to catch and drop riders (well at least til the next hill).  At the end slam the anchors on, 180 left into a climb that always has me walking.  Lap 2 though, no way, up I went.  Heart rate through the roof.  At the end of here its another drag to the top of the next descent and another hoot.  Wow, fast, flowy but with the added treat of loose rocks.  As this section finishes there is some rolling flat singletrack and whenever I race here I always think there is a gorilla watching from the fireroad…  (I don’t think I hallucinate on lap 2).  Anyway, here she comes, the second best section of the whole lap.  The dark.  The trees close in, the stones are wet, but hold their grip, lines are hard, boulders and logs.  Awesome.  And it pops you out at the dancing lady and apprentices.  Welcome to the Jungle was most appreciated,  Wham not so much.  The next section is smooth fireroad and saw me trying to get as aero as possible!!  Anchors on again for a 180 right into some sections of boardwalk before riding on the wall and ultimately through the hole in the wall past the Muddy Medic who patiently sat there for nearly 10 hours.  Thanks mate!  After feeling the edge every time through the hole, it’s a nice wide track (saying hello to some lovely ladies walking) before I head as high as I can before flying over the wooden bridge.  And ahhh.  Tarmac.  I’d eat here.  Not this time though.  And then my favourite section of the whole event.  It wasn’t long, it wasn’t fast but it sure was fun.   Off piste, through the trees, mud, off camber roots, descending to the fireroad.  Over.  Some more uphill fireroad that gets steeper every lap before some sweeping tracks in the trees and then into the main carpark.  You think its over, not quite yet.  Out of the car park and up a short sharp climb onto the world cup downhill and 4X course.  Spits you out and around into the dibbers.  And off we go again. 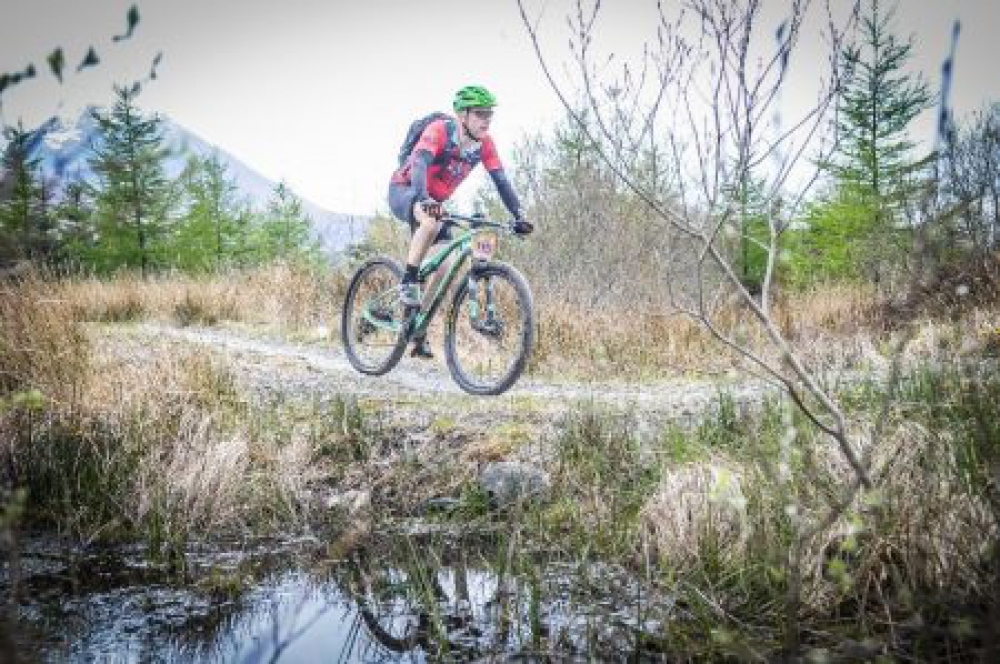 In my own mind, I had set myself up to try and improve on last years 13th place overall by trying to get into the top 10.   So plans were made, followed, changed due to work and family commitments.  Then all I had to do was follow the plan (noting I forgot to get food!!!) and see what happened.

Once we are out on the course, I’m just riding.  As fast as I can, but just riding.  If someone wants by, crack on.  If I want to pass, I’m patient.

Lap 3 came by, and food was ingested and on boarded for later.  With no one in the pits, I had no idea of other riders positions, of who was ahead or behind me or my place in the race.

Lap 5 or 6 I had a hard off and took skin off my knee, hip, elbow and shoulder.  Rider behind asked if I was ok.  He got some non-commital answers.  He said, just get on and ride.  I did.  It hurt.  The pain eventually went away but the blood was bright red and a stream ran from my knee to my foot.  Tearing the scabs off hurts even today a week later.

As the time goes on, the riders on course seem to disappear and then all of a sudden you would come across a gaggle.  At one point, I must have been riding on my own for a good 30 minutes when a rider just came and past me on a fireroad climb.  “Bloody hell, I thought I was on my own” I said to the chap.  “Just you and me” was his reply.  “You’ve won” I said as he quickly disappeared.

As the time goes on, you wonder if you have it in you to push to get enough time to do “another” lap, if you can get in under the 10 hour time limit.  Luckily for me, I crossed the line in 10:02 and gladly gave Frazer my dibber.  Done for another year.

At this point, I didn’t know my position, but the print out said 9th.  9th Overall.  Didn’t believe it!  Just around the corner was a big screen with the results on.  Jeez, I had done it, 9th overall…

Well chuffed is an understatement.  And first Manx home.

As always, lots to learn from the event.  Carrying food from the start being an easy one.  Slowing down at the start may be one.   Some discussions with myself and family over goals for the rest of the season and into 2018.  Perhaps some additional events, or combinations, but always adventures in endurance.

However, now that’s out of the way,  time to re-focus on the Manx 100 and trying to ensure it’s better than last year and hoping to be as good as a No Fuss Event 😊

Thanks No Fuss for a brilliant event!