Rain, thorns and a few hills...

I say rain, but it was more of an early morning drizzle cooling the air and keeping the dust at bay on stage 5, the queen stage in terms of climbing. Not huge at 2500m D+, but constant up and down, tough enough on the now tiring legs 6 days in, but what a day. Not so much singletrack being a transition stage, but it made up for that in the dramatic change of scenery to lush pine forests and imposing vertical rock faces to the cloud covered mountains around Boschendal. 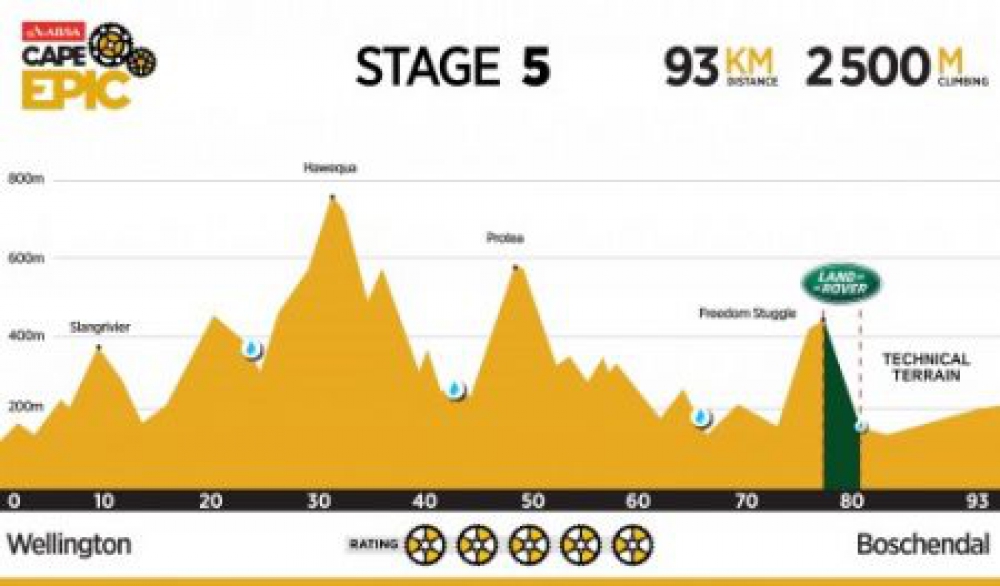 Finally, everyone at the start seemed to come to the realisation that this is a long stage race and the pace in those first 5km was slower than the previous 4 stages! The rain was more of a British summer drizzle, cooling the air and keeping the dust at bay, stopping the usual lung full of dust. The peloton flowed well together for a short while but the hills came quickly today, teams spreading out, finding their place.

The legs were feeling good, but Stuart's face said a thousand words. Keeping with him and working together, the first climb passed by pretty quickly, but with little options for helping him out on the loose surface. Get it wrong and wheel grip was gone, as it was on the way back down on the sand over hard rock. I made the school boy error of inflating the tyres too much after adding a little more sealant front and rear after having picked out a ton of thorns from each to the sound of a small ssssssss each time. I had been warned about the thorns here, but didn't notice them, until I checked the tyres. They were at least 10 in each.

The descent was steep in parts, Stu's descending skill shining through, my tyres just lacked the useful grip of previous days sending me way wide in every corner! It made my bad descending REALLY bad.

The cooler weather was making riding that little bit easier, more like a summer riding back home, Stu giving it what he could on each and every climb. The open sandy trails become double tracks through lush green forests of pine trees. At least here we could work better together, playing cat and mouse with a number of teams on our surges forward and being occasionally caught on rocky descents. Some riders took all the risks, putting others at risk at the same time. An outcast pro pushed past me on a rocky technical descent, knocking me off line. Unnecessary and plain stupid. 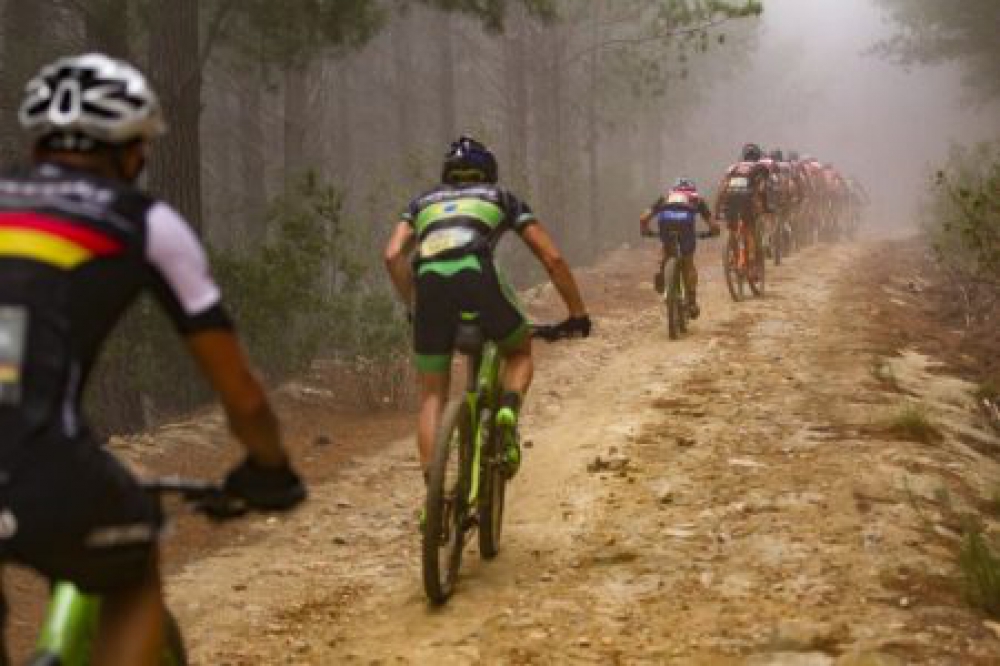 Total kudos to the Exarro RSA riders who were on alloy hardtail KTM bikes. This race is tough enough on a fully, let alone an alloy frame. These guys were strong up and had the skills on the way back down. Never judge a rider by the bike! 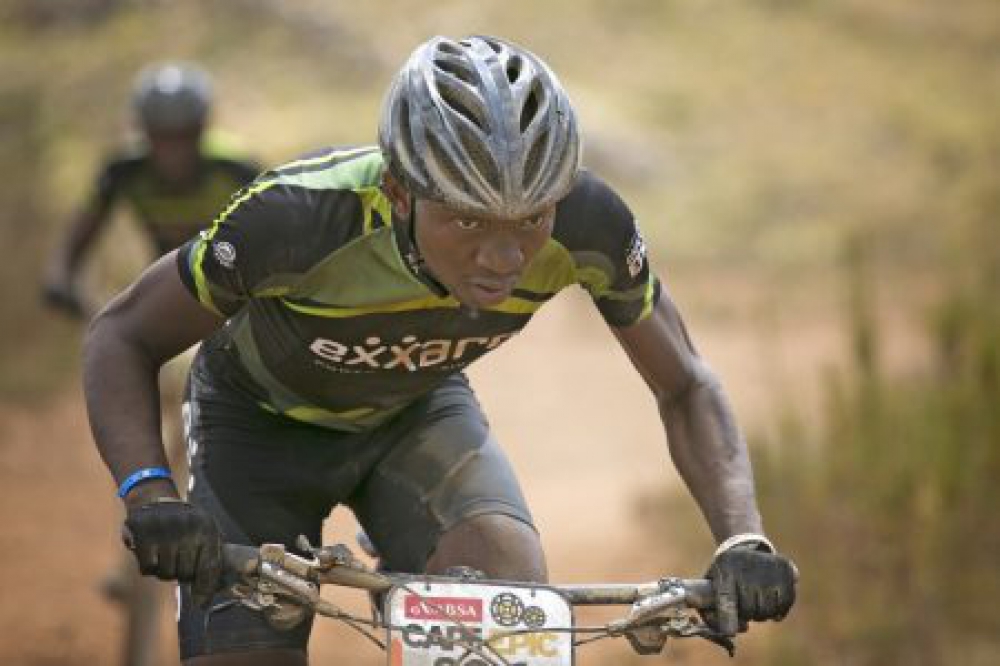 Just after the 2nd feed Alban Lakata came barreling past, pedalling smooth but oh so powerful strokes. This guy has calves the size of my thighs!

It's so cruel when you can see the route rising ever upwards far ahead, a dirt track amongst the greenery, snaking its way up  and around the hillside. The view of hillsides covered in forests and the smell of wet pine trees distracting a little from the effort. Sweating buckets when the sun popped out on the steep open tracks, the climb in the forest was a welcome break from its rays. 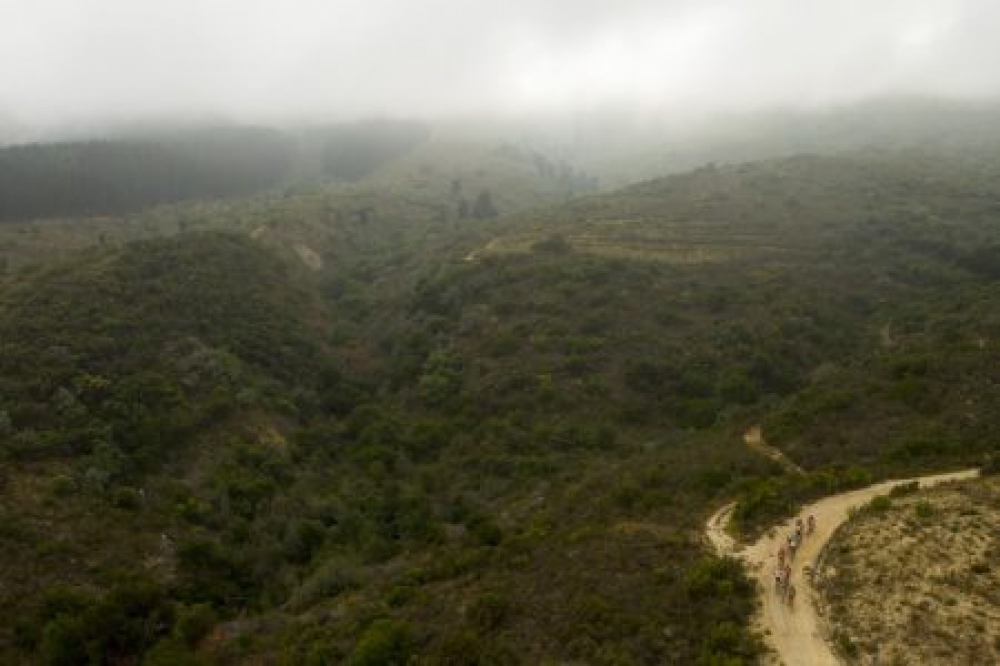 The way back down was sweet switchback singletrack through the trees, rear tyres sliding out in the dust, Stu was railing it like a pro. Popping out, the way ahead was rolling open tracks with no shelter from the now imposing  sun, making us sweat, a lot. 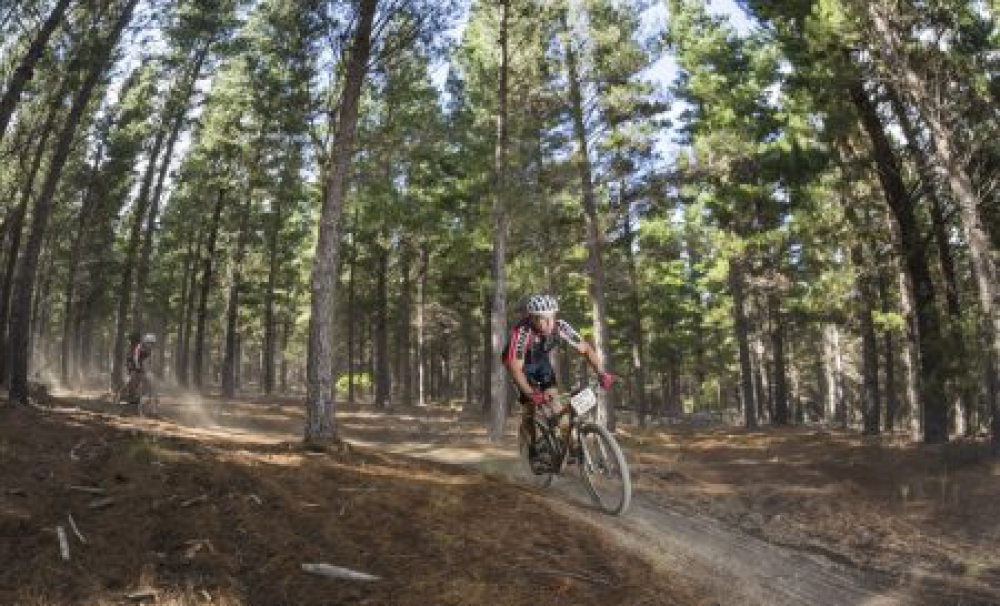 It's so cool to have farming families trail side shouting encouragement where ever we went, but a first was a small string quartet, a family's children playing as we rode past. So many  new and fun experiences at this race. 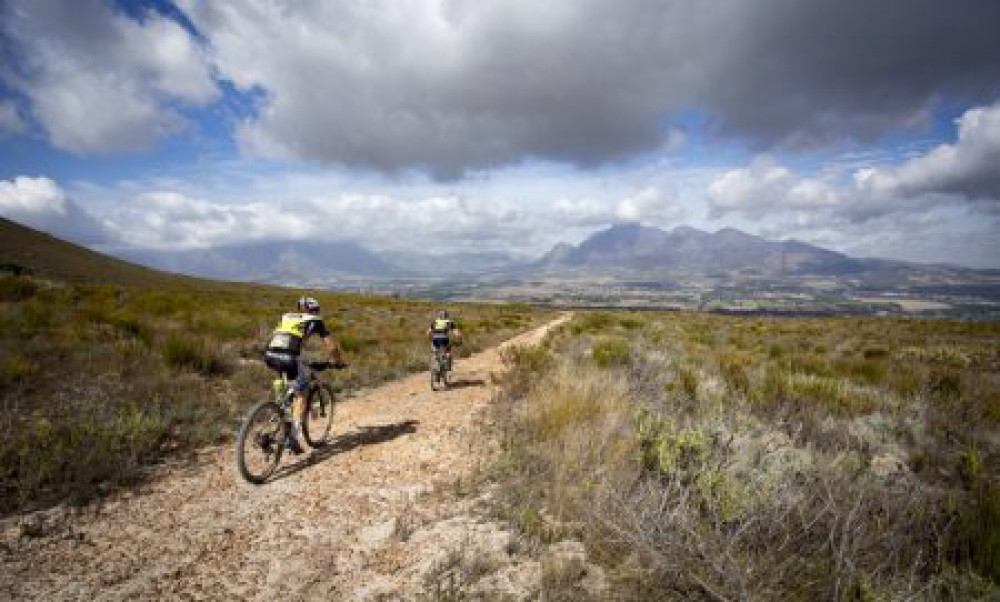 Will Hayter's bad crash at the Epic 2 years ago, hitting something in the grass keeps me from speeding through overgrown terrain too fast where I can't see the trail. I get overtaken, but hopefully stay safe. 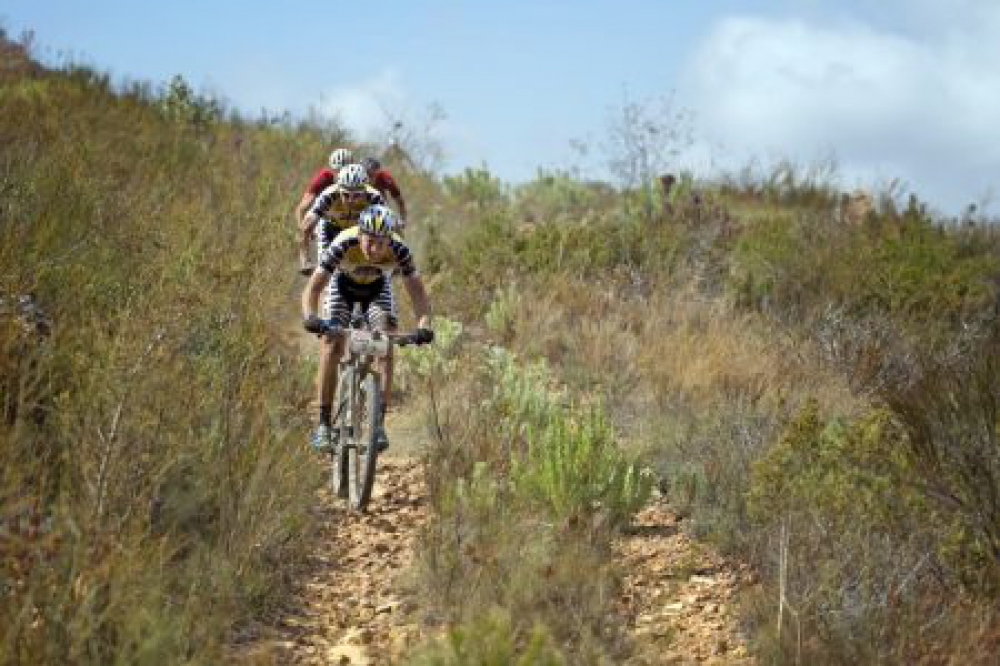 The terrain changed again, back to shrub with cloud covered imposing rock buttresses rising to our left. Stu was past his limit, working with him he still managed an impressive tempo, his face saying it all. The sandy sections pulled real hard on tired legs, topping out he had a moment. All I had to say was 'tell me about at the finish!'. He cracked on. 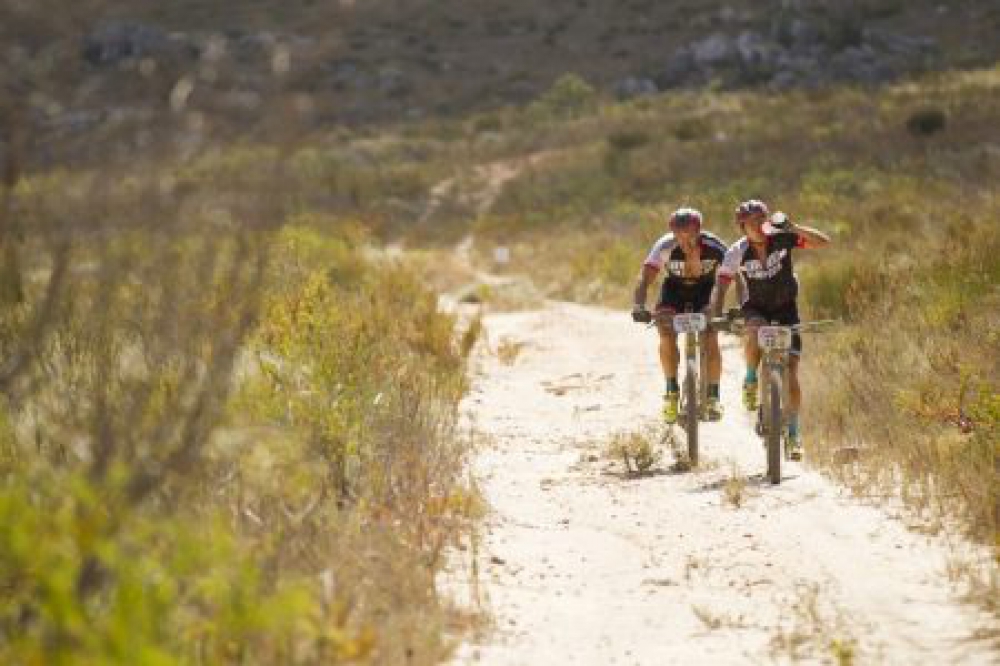 We battled tired legs and minds on the final winding rocky descent to keep from any mechanicals, wary of any errant sticks. We got passed, but no matter. The last 10km was flattish, we had Sharon Law's team with us, I hit the front and led the chain gang back in, Stu finding some good power from somewhere in those final kms. Amazing. 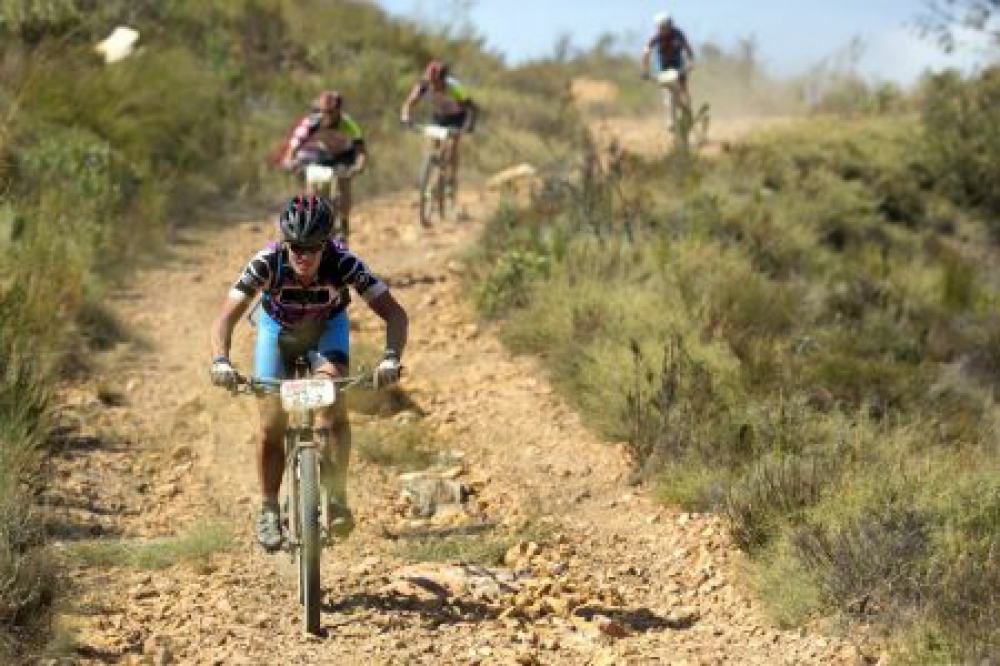 A brief river crossing cooled hot feet. Back in in 9th place. No mishaps, no dramas. 2 stages to go.