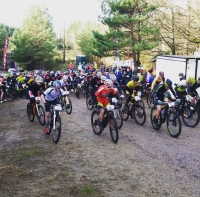 Round 1 of the Gorrick Saddle Skedaddle Spring Series got underway at Crowthorne wood yesterday with a packed field there to enjoy another classic Gorrick course.

In the Expert Women's race it was Emily Wadsworth (Beeline Gener8) who took the first round win after a blistering first lap. Holly Macmahon (WXC World Racing) tried to hold Wadsworth's wheel but Wadworth was just to quick with Macmahon eventually being reeled in by Maxine Filby (Cannondale Girls). Macmahon went on to finishing 3rd behind the consistent Filby in 2nd.

The men's race was eventually won by Welsh star Lee Williams (Bikesoup). After a tight first lap with many riders riders showing good early form, but it was Williams who was able to keep the pace high and by lap three had managed to eek out a few seconds gap leaving Jody Crawforth (Hargroves Cycles) and Adam Holleyman (Wight Mountain Race Team) to battle it out, Crawforth eventually taking 2nd from Holleyman in 3rd.

Yesterday was also round 3 of the increasingly popular Mad Dash XC series from Ebworth Park near Gloucester.

Elsa Hadley stormed to victory in the senior women's race from Dawn Thompson.

In the men's race it was Nic Burridge who grabbed that top step from Tim Trew in 2nd with 24hr specialist Matt Jones bringing it home in 3rd.

Full results can be found here - My Race Results