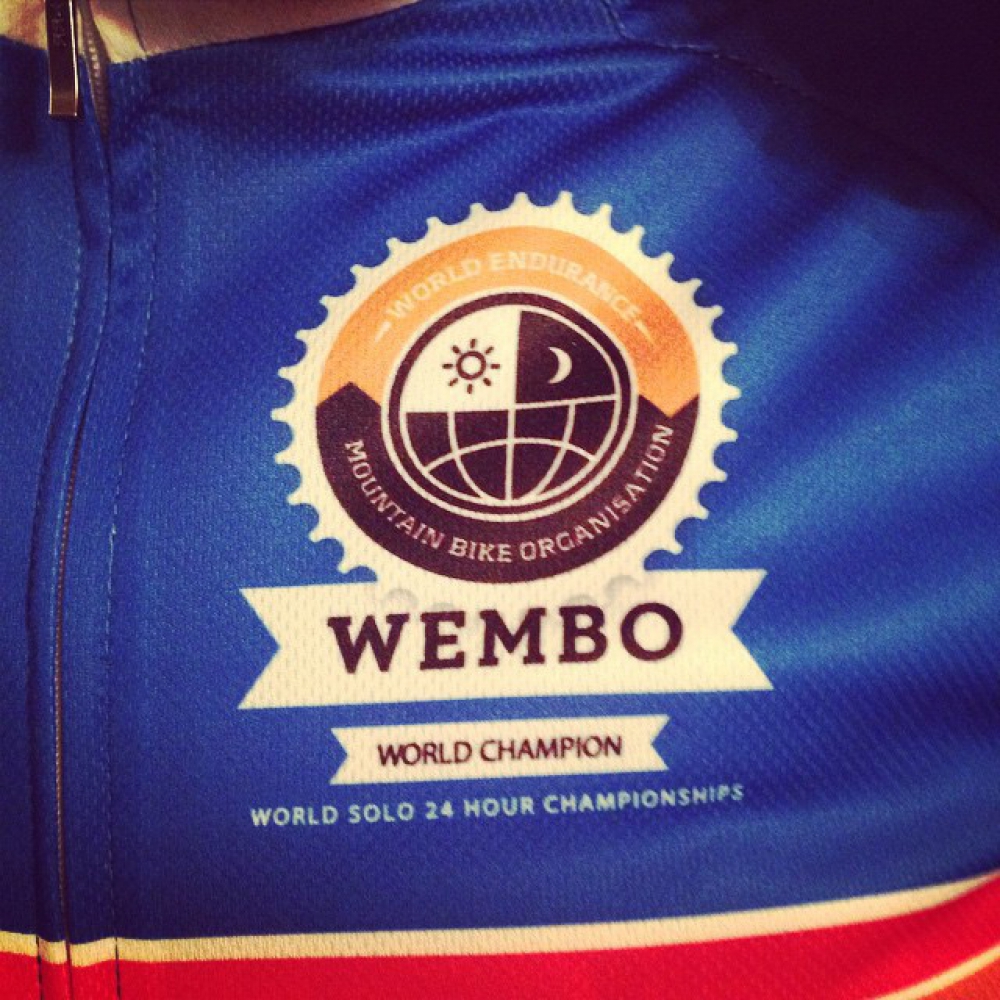 Heading up to the worlds on home soil for the first time I was really looking forward to testing myself against certainly the best of the Brits and some top quality world opposition who had travelled from far and wide to mix it up in Scotland for 24 hours. I'd had a good season to date and certainly learnt a lot that I was ready to apply to the race where I was targeting a top 20 overall and podium in my category. 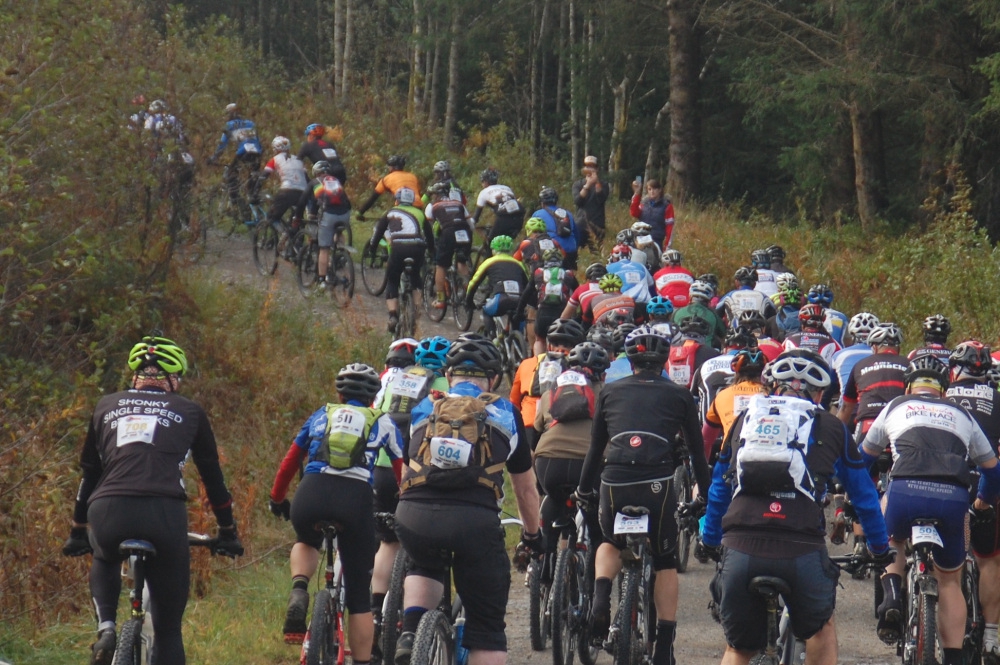 I had entered age category instead of elite judging that I wasn't going to trouble the top 10 (where the prize money was) so I had at least a bit of a chance of some glory, but deep down the top 20 was what mattered most. The start involved the elite riders being put ahead of 'the rest' so I was in the pack behind the elite men and women at the start line. I knew there was a long fire road climb to kick things off so there was plenty of chances to get round any stragglers. As it happened we were only held back about 15 seconds and, by the time the race officially started, part way up the climb we had pretty much caught up with the women's field so I was able to mooch through fairly easily. I wanted to get round as many as possible before the first descent so I didn't get held up. This part of a 24 is really tricky to judge and I have found it quite a battle to get the heart rate down early on in a race so that all the matches aren't burnt early on. At the sharpest end of things it seemed that matches were being burnt pretty rapidly as the first laps were bashed out amongst those who were going to 'ride their own race'.

Having ridden relentless24 last year I was familiar with most of the course, which would provide a true test of endurance strength. Some new singletrack sections had been added and seemingly most of the flat sections removed meaning 450m climbing per lap over the 13.4km course. The major climbs came at the start and end of the laps, the first of which followed part of the witches xc trail up a hard pack but steep surface, after a short flat fire road it then kicked up again to unleash a hellishly fast sweeping descent that plunged back down through the woods to eventually leave you holding on for dear life through the rocky corners at speed. I most enjoyed the final descent at the end of the lap which was super fast with some launch for your life jumps and flowing switchbacks. Free time was there to be had for those who fancied risking a bit of high speed action. On one lap near the end I managed to overtake about 4 riders on one descent, most in fluorescent retro clothing suggesting those of European origins weren't quite as comfortable on the course as those home grown. 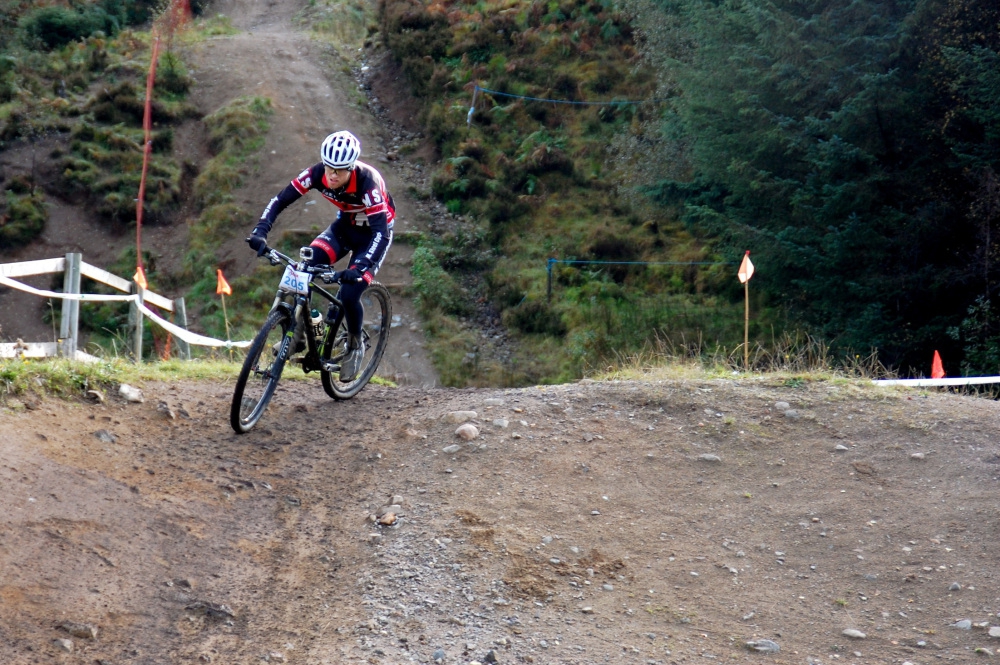 I was blessed with a great pit crew of Dave, Rich and Sarah so effectively two mechanics which meant my bikes probably came out of the race in better condition when they went in! Having this setup enabled me to get most things race strategy wise spot on. Whether or not my race strategy spreadsheet had anything to do with it or not, it seemed like my pit crew always had everything to hand and any clothing changes were quick of which there were more than usual due to the cold damp air. The course snaked past the pits before the final few km which was great as I could shout what I was likely to need to the guys. It's amazing how difficult remembering what you need to ask/tell your pit crew if you only have one chance per lap so this was a welcome feature of the course.

The race itself didn't hold too many dramas for me as these things go. The problems I suffered at Bontrager 24 had been resolved with a better eating strategy based on Joe Friels recommendation of eating/drinking when you are hungry/thirsty instead of sticking to a specific strategy. I did manage to get temporarily blinded when my light mount that I hadn't done up tight enough flipped up from my handlebars mid descent. Other minor incidents included an embarrassingly stupid minor off on lap 2 and a chain continually dropping off some poorly fitted (on my part) new jockey wheels. This was about as dramatic as it got.

It took me until about lap 6 to start feeling a bit more settled after the initial red lining but I slowly managed to get in to the 'zombie zone' of total focus for the remainder of the race. The expected body battering that the course handed out lap after lap was the biggest challenge. I had left one of those hand strengthening things in the car over the last few months to try and ease the pain of the anticipated roughness of the trails. This seemed to help but from about 18hours in I was struggling to shift gears after the long descents but kept concentrating on relaxing my arms as much as possible and stretching my hands/fingers on the flats.

My lighting strategy went perfectly with the toro run time display being particularly helpful but the (excuse the pun) light but bright axis being the perfect balance of lumens vs weight for the weenies amongst us. All my bikes and kit performed brilliantly which makes life a lot easier/faster.

I tried to employ my previous years strategy of receiving as little info as to my position as possible for as long as possible. I find that this helps me stay (relatively) relaxed as possible, after all my plan is always pretty simple in any race I do, ride as hard as I can consistently over the allotted distance/time. In the case of 24's with my limited experience to date I've found that visualizing and 'feeling' for how hard you can ride at for 24hours helps keep things steady. 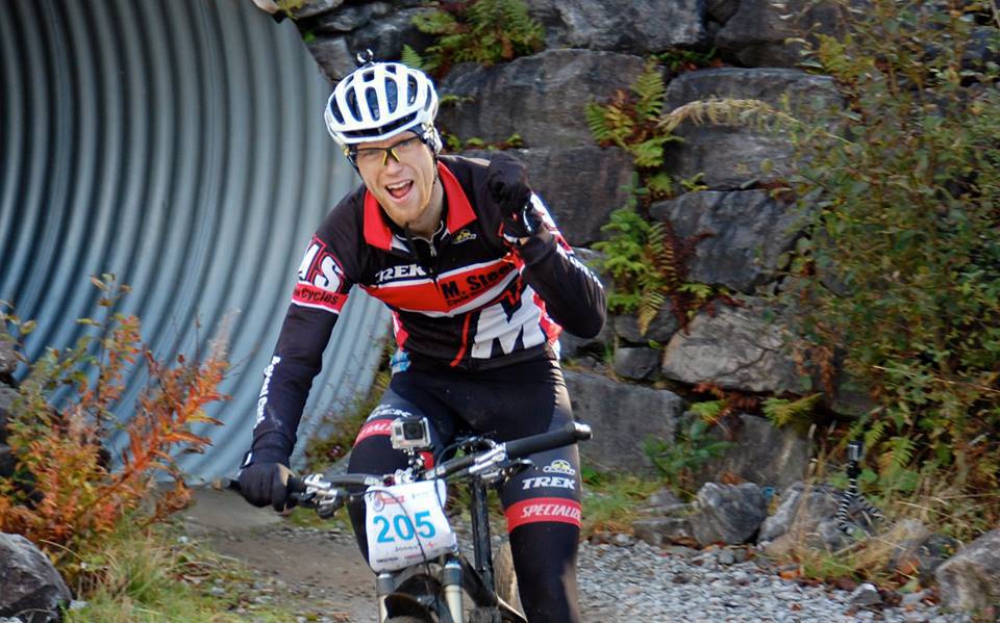 I managed to get through 23 laps in total in just under 24hours, 192miles with over 10,500m of climbing or if you're in to that sort of thing, well over the height of Everest. I had time for another lap which would have boosted me up a couple of places but I was happy with where I finished and didn't want to inflict any further body damage having seen others looking like complete wrecks on my last lap. I didn't see second place in my age category (23-29) Nathan Judge all race as I lapped him whilst he was in the pits once and perhaps didn't quite see him the second time. He was one I was looking out for in the category pre race as I knew he had good xc speed. Unfortunately the category shrunk by the time it got to the start line so I ended up comfortably winning my age cat and finishing 17th overall. Mr Bionic Jason English retained his title with 26 laps having only flown in the day before and having done a 24hr race only 2 weeks previously, nutter! Ant White took 2nd in a performance that saw him push Jason all the way, a great season for the XC Racer man. 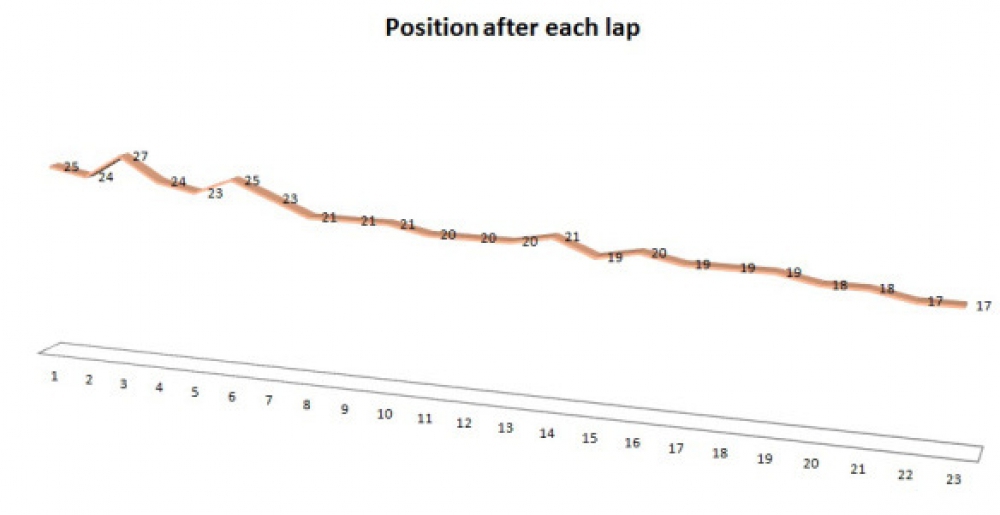 As you can see from the graph I gradually worked my way up the field which is probably the way to do these things so I'm pretty happy with how that worked out. 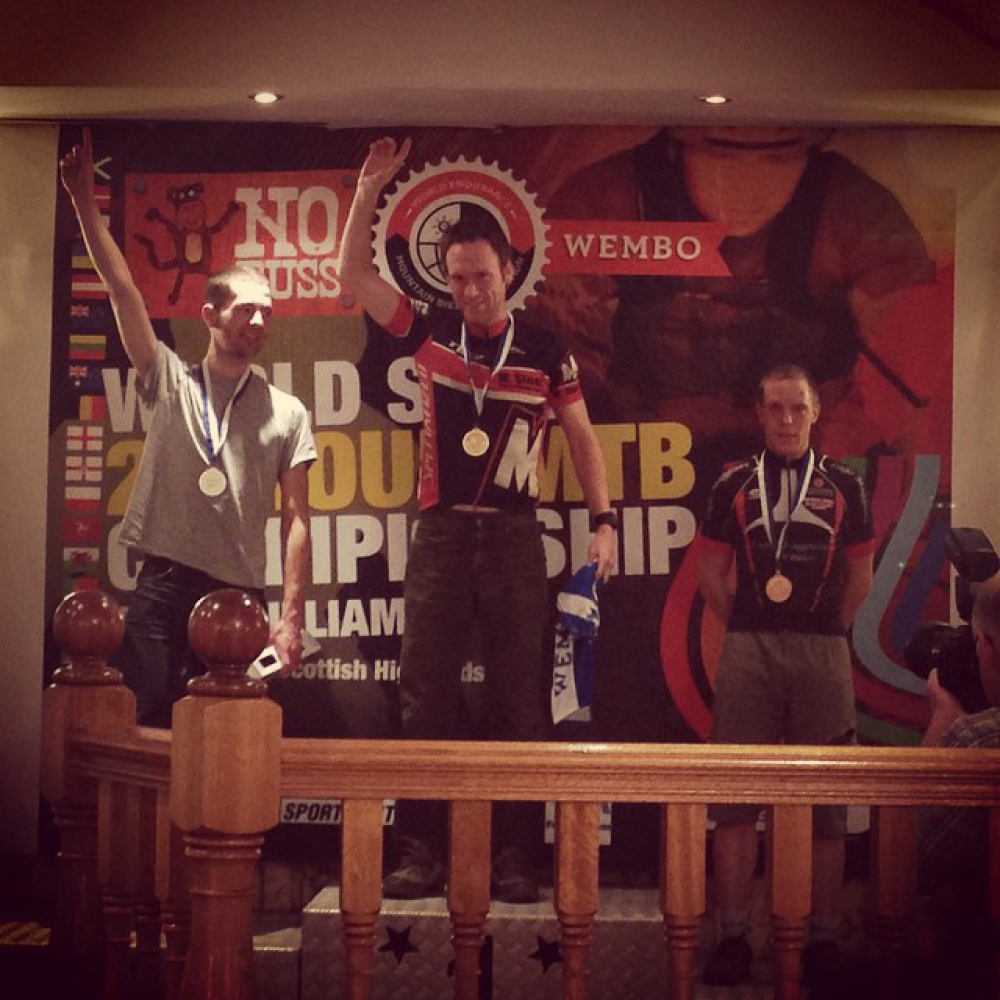 It was great to see so many familiar faces from this year's racing, whether it was Gareth Hayes on my back wheel on lap 1 (this has happened at least 3 times previously this year) or keeping a good pace up and down with Jason Hynd, chatting mid race and getting to know so many great guys has been a real pleasure this season.

I'm pretty surprised and amazed at my results from this year and feel like there's still a lot to learn and things I could do to make me faster. After a year packed full of stag do's and weddings I've just about managed to get the life/racing balance right without becoming (too) obsessive.

A massive thanks to M Steels Cycles for keeping me going including getting a spares box together and lots of energy products for peace of mind/race fuelling respectively. And not forgetting Exposure Lights for giving me the confidence to smash the night laps and USE for solid, lightweight and reliable components including their new EVO91 post and lush carbon wheels.

As for next year, I'm not quite sure what the plan will be but it will certainly contain a few attempts to further discover my limits of endurance, perhaps in some new places and possibly even a new challenge of some sort. For now though it's time to do some house work, sort out the man cave (shed) and sit back and raise a glass to a great year being surrounded by great people.