What a great way to finish off racing for the season, the Tide to Tide event at Pembrey Country Park, South Wales. Part beach race, part cx, part mtb and part night race, it is a unique event on the race calendar. The event was a late one, in teams of 2,3 or 4 riders, run from 3 to 9pm, from high to low tide, with all laps having to be completed by 9pm to save from being washed away in the rising tide! Racing across the beach and along tree lined singletrack through the dunes, there was never a dull moment. 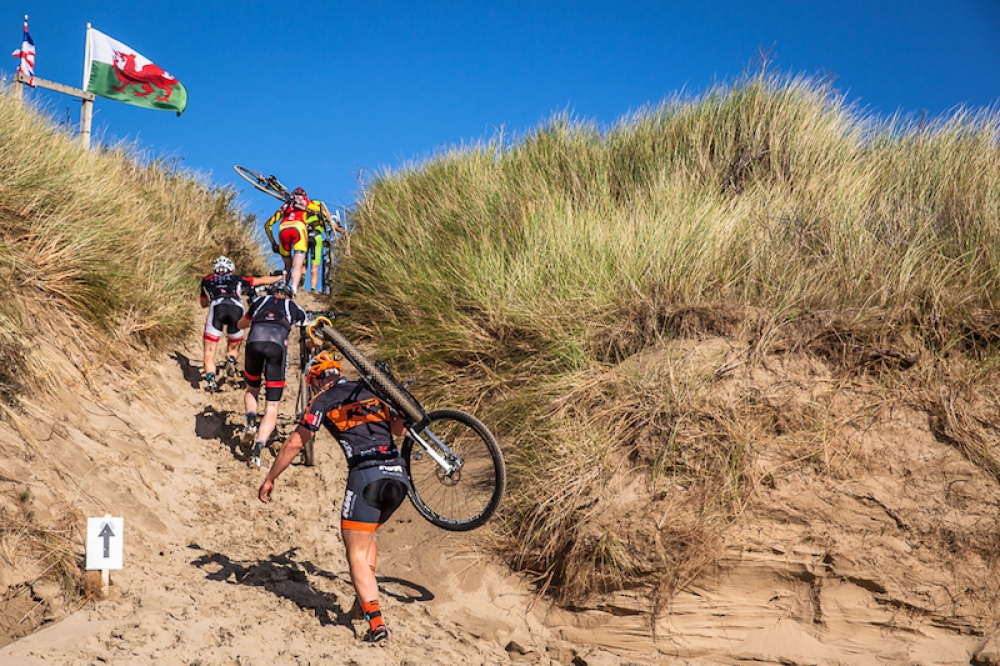 What bike to choose, if you had a choice? With an abridged beach section from the Battle on the Beach race, bumpy, sandy/dirt singletrack and sandy banks to negotiate, the majority went for the trusty hardtail mtb, some fully rigid, with the odd full sus. Some were on the inevitable fatbikes and others preferring skinny tyres, such as my teammate Crispin Doyle (Hargroves Cycles) on his Ridley cx. Lacking the inbuilt ‘suspension’ in my 2 lower spinal discs, my choice was the ever reliable Niner Jet9 rdo with Fox dual remote shocks.

It was great to see so many familiar faces lining up; Huw Thomas was gunning for it in the mixed with Emma Osenton (having traveled all the way from Hebden Bridge), the KTM team, the MtZoom mixed pairing of Ant White and Iwona Szymd and Fruit4London having made the long journey up. With around 19 minute laps, strategy was 2 laps on, 2 off, Crispin was elected (by default!) to ride first. Not a bad plan given his cx racing experience. Perfect plan as it turned out, pushing the pace up front from the start, but lady luck was in a bad mood. Suffering a puncture in his rear tub on that first lap, he rode on, swapped bikes for his Specialized Epic and rode lap 2. He did a sterling ride, not losing too much time, coming in 4th place and 9th overall. 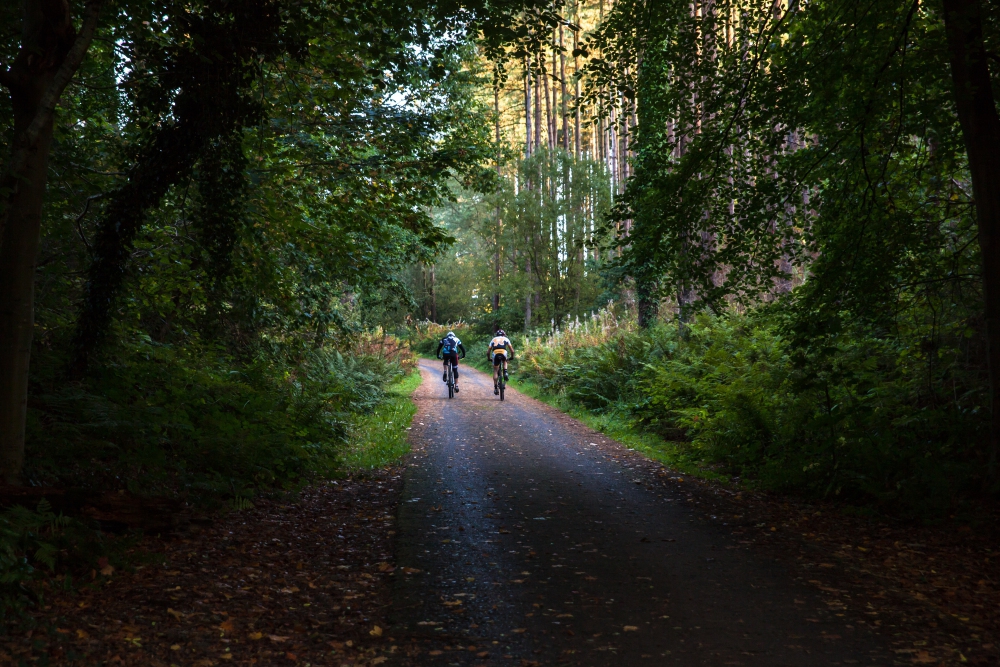 With all of my previous races being not less than 3 ½ hours, short, hot laps was a real shock to the legs and lungs! From the start it was power on, power off, but the course had you grinning from the first few metres, darting along tight, rolling singletrack through the woods, taking the  ‘B’ option down a steep descent, as I hadn’t even noticed the easier ‘A’ option!  Nearing the beach, the strong autumnal sunlight bled through the trees, almost blinding us on one section, but I wasn’t complaining. The sun was very welcome in contrast to the previous night’s storms. 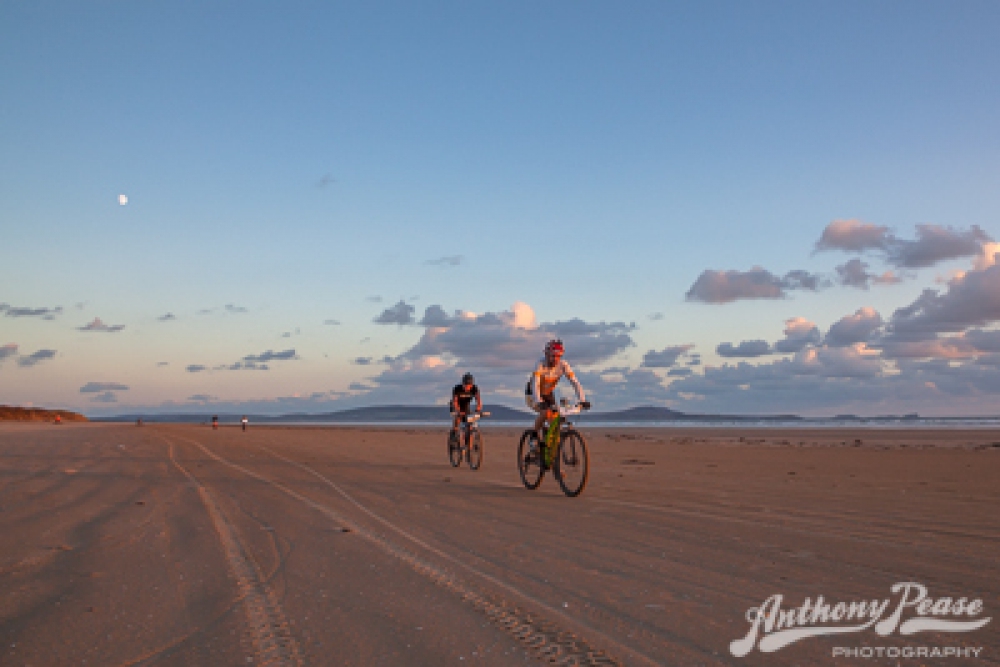 Dropping out of the wooded singletrack, the beach beckoned, and the first sandy run, for those not on fatbikes anyway! It was down some rugged steps and onto the beach. The soft sand tugged hard at wheels, legs churning over the gears to avoid coming to grinding halt, trying to get to the more rideable, solid beach section. The ride along the beach was only about a 1km long, but the furious headwind made it feel so much longer. Head down, it was tough going on your own, riders making a beeline for anyone else, anything to get some shelter. Some latched onto my wheel, but I gave them a hard time for it!

A steep, soft sandy bank was our exit, I didn’t see any fatbikes make it up here! Coming off the beach, I was never sure which was quicker, to pedal or run through the soft sand, I tried both and it was inconclusive! It was definitely a run, or a trudge, up the bank though, shouldering the bike and back into the woods.

It was fast and furious out on course, friendly competition though, constantly jostling positions with others, everyone being super courteous when needing to pass. Even though there was plenty of singletrack, the course was well designed in terms of being able to pass people safely too. Mindful of Crispin’s early misfortune, the legs were pushing at the edge of willingness, lungs sucking as hard as they could at every opportunity to pedal. Not having to worry about changing up front helped too, trying out a 1x10 set up with a single Rotor Q ring. Riding simplified. 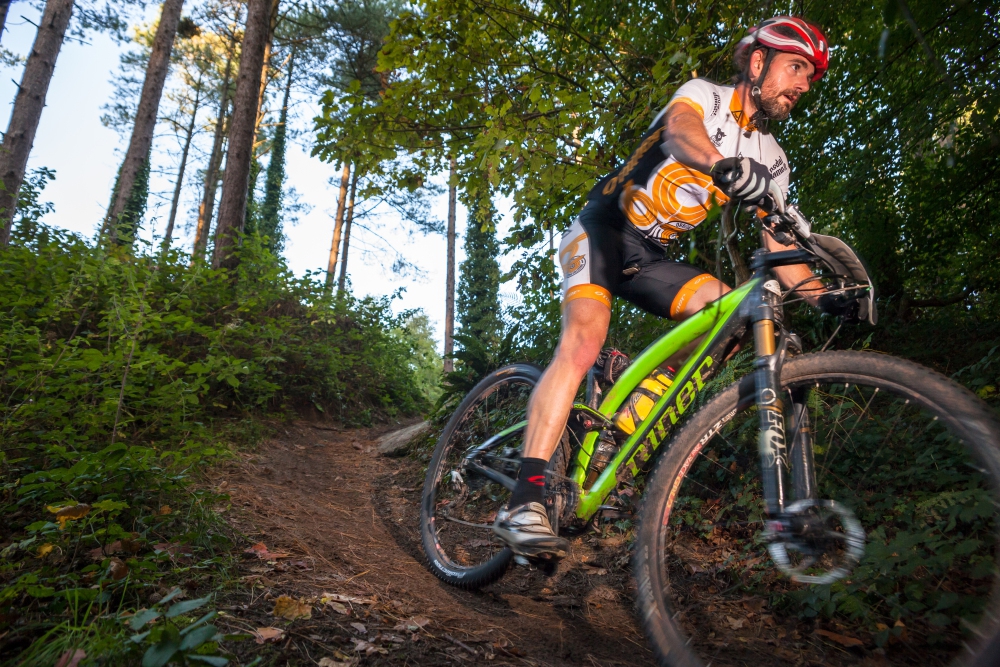 Fueled (personally) by MuleBar’s new Eastern Express bar and their gels, Crispin and I were creeping up the leaderboard, Crispin putting his cx experience to full use, ‘sprinting’ around each lap, the climbs only ever short and punchy. I never felt at a disadvantage with the full sus, quite the opposite, allowing me to sit and pedal hard without any repercussions for the back. Ducking in and out of the constant winding trails was simple great fun with the occasional straight to put down some speed. Twisting singletrack and a sharp, sandy bank brought us back round to the start/finish.

With night drawing in, lights on bikes were mandatory from 530pm, as the light was already fading in the densest part of the woods. It was getting cold too, the GoreBikeWear windstopper baselayer a really useful piece of kit. 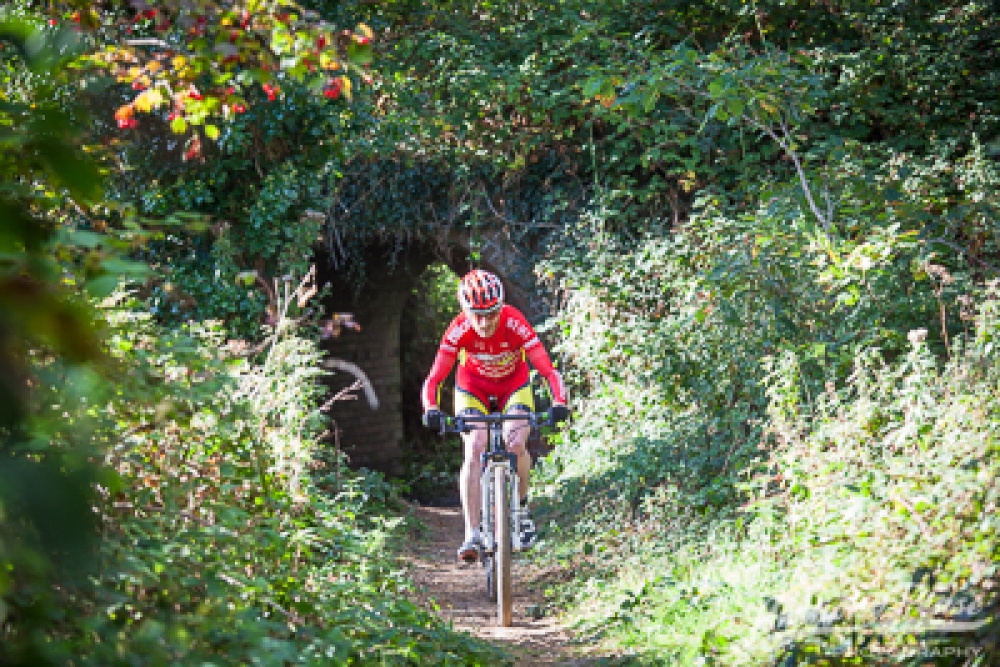 As Crispin went out for his 3rd time, we were up into 2nd old gits, behind by only a couple of minutes now. We were just keeping the pressure on. The rapid drop in temperature reminded us that winter is coming! Riders huddling around in heavy jackets and hats, stamping feet to stay warm. With exposure lights illuminating the way for my 2 final laps, I was hoping that lady luck was feeling better as we were lapping at the heels of the old gits in 1st place, but with the time left 1st overall was out of reach.

Racing along a beach in the dark was a first, creating a spectacle of lit dots spread out along the sand. The full strength of the Exposure lights Six pack almost made it easy to race in the darkness, illuminating the trail far and wide in front. The red mist was down, but never without being courteous when wanting to pass, stomping on those pedals over every incline! The last, brief sandy bank had defeated me on a couple of laps, a matter of personal pride drove the legs hard up and over on the final lap.

Crispin had time left for a single lap. Checking the result, barring no mechanicals, we had pushed into 2nd overall and 1st old gits. After an anxious wait, Crispin appeared with 9 minutes to spare, maintaining our position. He even achieved the fastest lap of the race, but was still wondering just how much faster he could have gone round on his cx bike! Chapeau.

What an event. It’s certainly different and a great one to do. There were smiles all around from everyone who rode. Pick your bike and tyres though, perhaps a Gravel Grinder would be fastest shod with some 42c tyres and some good puncture protection?

Had the rain continued, the changeover area was well sheltered at least and the cafe was open for hot drinks as things got chilly.

Fancy it next year? http://www.tide2tide.co.uk/info/ Or earlier in the year there is Battle on the Beach with a longer beach section and the same flowing, tree lined singletrack.

Thanks to e3coach.com for getting me through the year.