The snow glows white on the mountain tonight. Not a tyretrack to be seen. A kingdom of isolation, and it looks like I'm in the lead. The wind is howling like this swirling storm inside. Can I keep it going. Heaven knows I've tried. Don't let them catch up, don't let them see. Be the good rider you always have to be. Conceal, don't feel, don't let them know. Well now they know. Let it go, let it go. Can't hold it back anymore (otherwise you’ll crash on those ice covered rocks)….. [caption id="attachment_9095" align="alignleft" width="300"] 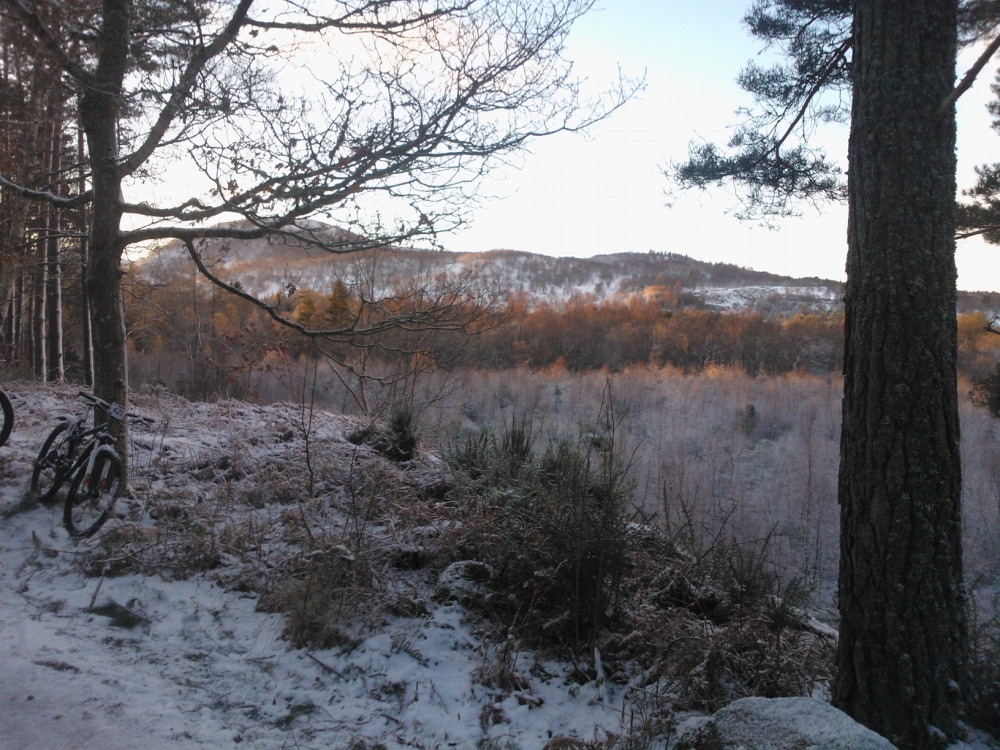 Stunning Scottish Scenery[/caption] My journey to this year’s Strathpuffer began last October when fellow endurance racer Jason Hynd asked me; “Do you wanna make a snowman?” Actually, he asked me if I’d like to race pairs with him at the world’s only winter 24 hour mountain bike race (although as it turns out we were able to do both). I was reluctant at first, just a few weeks prior I’d put myself in hospital racing another Scottish 24 hour at the WEMBO World Championships in Fort William potentially due to the cold damp conditions and wasn’t keen to repeat the experience. However, fellow WEMBO casualty Jason was keen to use the Strathpuffer as an extreme conditions ‘test’ race. If we could get through that, we could get through any race. Ongoing medical test through November and into December curtailed training but we took the chance and managed to bag one of the pairs entries which sold out in under six minutes! The reason for the popularity; this was the tenth anniversary edition. A good sign in my book; both a large and loyal following of participants. The gravity of the undertaking started to dawn over Christmas and I started looking at logistics and kit requirements. The event venue is west of Inverness and would require a drive of at least twelve hours to reach, that’s twenty four hours in the car as well as on the bike. Then there are the conditions to consider; cold, wet, potentially snow and ice. What clothing to take? That one is simple to answer. Just take everything you own. As the event drew closer, the challenges really came into focus with temperatures plummeting, snow on the ground and major route closures. This would be the real deal, a ‘proper puffer’ but did I have enough kit to race up to eighteen laps in sub-zero conditions without falling to hyperthermia. The cold never bothered me anyway! [caption id="attachment_9096" align="alignleft" width="300"] 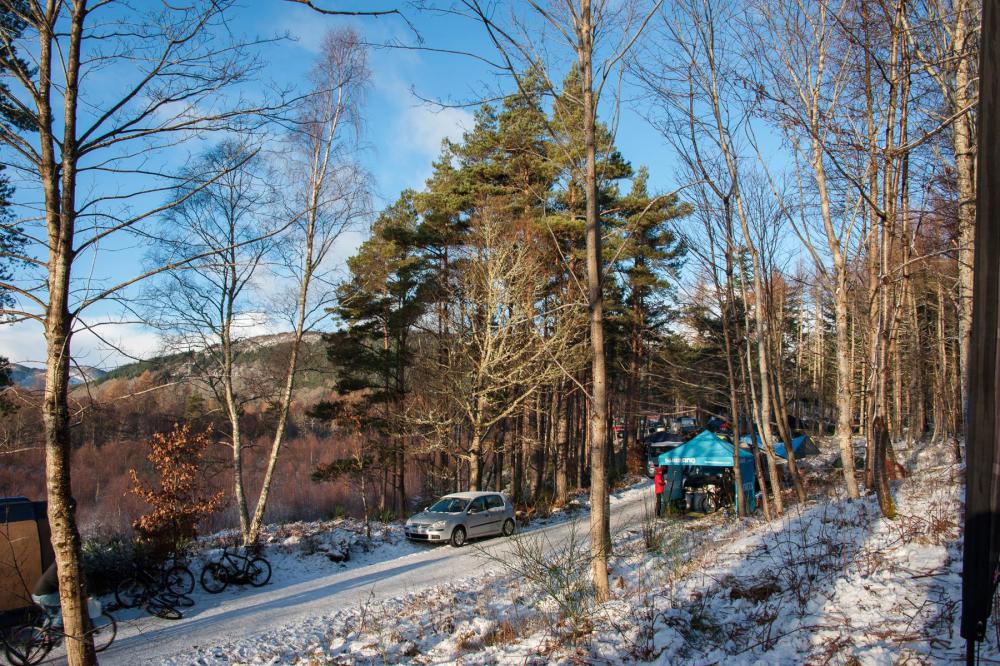 Snow and sunshine[/caption] The morning of the race dawned cold and bright; a beautiful morning in the Scottish Highlands. We set up pits close to the main marquee to make it as easy as possible for our ace one man support crew  Rich Wilson and with a comparatively early 10am start there wasn’t time to worry. Soon it was time to kit up, attend the pre-race briefing and make our way down the entrance road for the Le Mans start. I adopted my Benny Hill running style and was one of the first to collect my bike and begin the long fireroad climb, a few riders appeared out of thin air but I was soon on my own at the front, surprised to already have a gap. The level of support was impressive with supporters and pit setups lining the fireroad climb and offering much vocal encouragement. I eased a little at the course high point and three riders slipped by including key rival in the pairs race; Rich Rothwell. The first section of singletrack offered a challenging mix of snow, ice and rock and my skills completely deserted me, even running an Ice Spiker tyre on the front it took a good few kilometres to master the conditions. Accurate line choice, careful weight distribution and commitment were key ingredients. Basically, you had to ‘Let it go’. A highlight of that first lap was dropping out into the open to be greeted with blue skies and stunning Scottish scenery as I picked my way through virgin snow on the final open descent. That final downhill would change personality later and prove to be a less enjoyable challenge. [caption id="attachment_9092" align="alignright" width="300"] 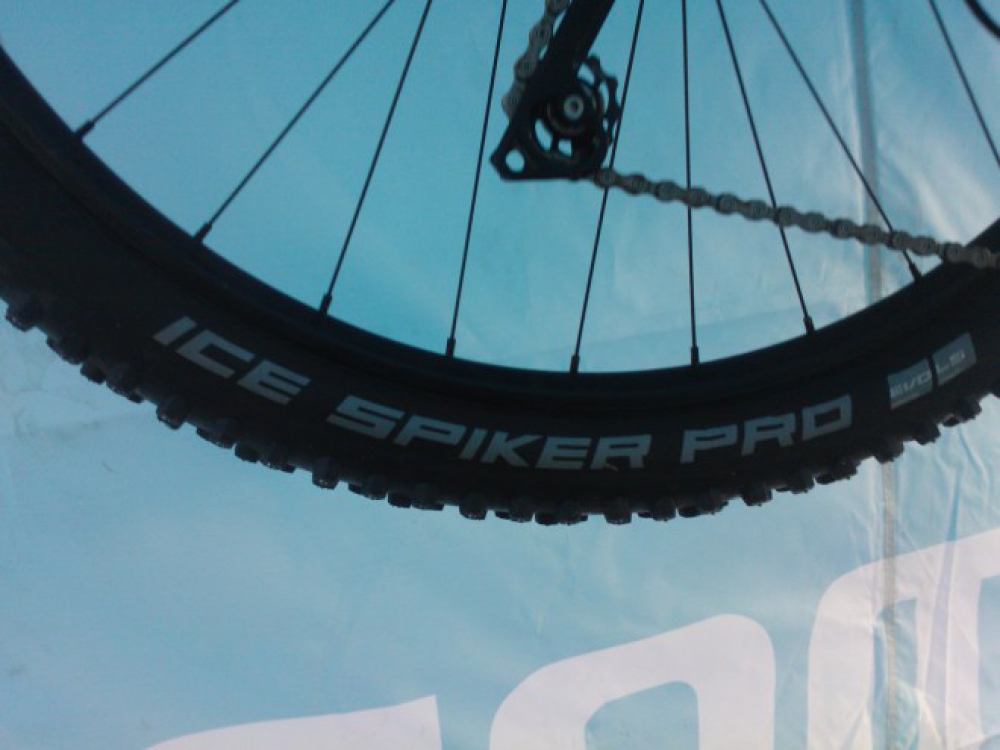 Ice Spiker tyres helped in the slippery conditions[/caption] Jason picked up the baton for Lap two and left me to nail the routine that would be crucial if we were to keep going and keep warm. We were very lucky to have ace mechanic and all round top bloke Rich Wilson looking after us and we couldn’t have asked for more support. He waited at transition every lap with extra clothing to blanket waiting and arriving rider, then whisked bikes away for a wash and check over while I rushed to climb into dry kit and consume warm food and drink in the welcoming glow of our van. In less than 40 minutes it was time to repeat. The next lap was a blast. A good line had been etched into the snowy sections and familiarity with the course enabled me to go faster and close the gap to the leading pair, recording our fasted lap in the process. Jason did likewise and a puncture for our rivals gifted us the lead but so early in the race it would have been foolhardy to attack and try to capitalise, instead we kept the pace sensible and surprising built a bigger lead. This was getting interesting. Darkness descended not long after 4pm and the realisation that I did not have enough clothing to cover the race chilled me to the bone even before the -3 degree temperatures had chance to do the same. The riding part was fine, but the breaks between laps were very tough. Maybe racing solo at the Puffer is an easier option after all? There were plenty I passed in the night who would disagree! Darkness also saw a gradual deterioration in the course as snow and ice thawed to mud making some sections very hard going. The short steep climbs seemed to demand more power to summit and that final downhill to the finish had turned into a horrendous motorway of deep chocolate mud filled ruts, with hidden rocks to throw you over the handlebars. I don’t recall a race where a section of course filled me with so much dread. But the race was still on. Rothwell and Simcock had regained the lead but we were still in touch and had got our wheels a full lap in front of 3rd pair The Half Wheeling Gang. [caption id="attachment_9089" align="alignleft" width="300"] 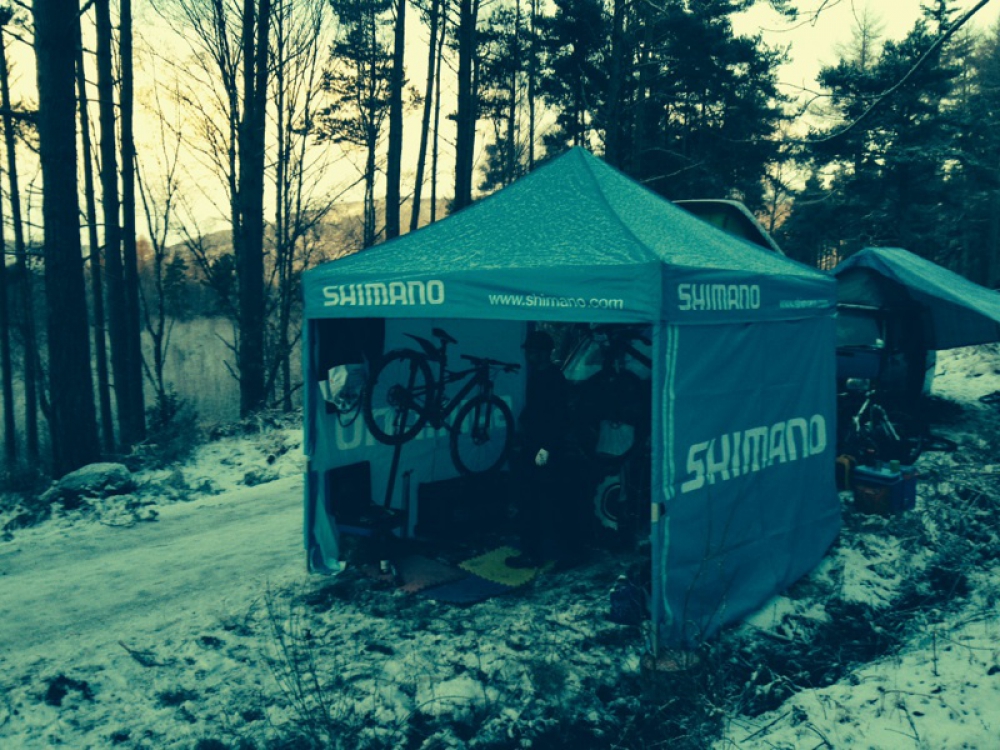 Shelter from the elements[/caption] I didn’t enjoy much of that long night but a few of things kept my spirits up and mind on the job. The huge diversity of riders out on track; many personifying the ethos of participation and enjoyment. I passed one stricken looking rider at the side of the track and called to check he was OK only to be reassured “Nah I’m fine mate, just taking a selfie”. A selfie, in the middle of the night when it’s -3! This enthusiasm extended to the support crews lining the opening fireroad climb who never failed to shout encouragement for all sixteen laps I completed. But most striking of all were the fantastic marshals at key points around the course, always upbeat, a cheer for every rider throughout the whole 24 hours. Chapeau and thanks to every single one of them! The cold really got to me in the early hours and Jason and Rich hatched a plan to get me warm and hopefully fast once again. Finishing my lap at around 4am, Rich shepherded me back to the van for a long break and sleep while Jason set out with enough fuel to ride a long block of multiple laps. Initially I was too cold to sleep, but as the warmth returned to my core, I sunk into the van seat, stretched my legs out and fell into a blissful deep slumber. Meanwhile Jason put in a heroic effort to defend our podium spot, laying down four consistent laps and keeping the dream alive. We’d lost ground on the leaders and 3rd place had unlapped themselves, and sensing an opportunity had closed to within 30 minutes of us. As light returned I awoke rejuvenated and despite some trepidation about returning to the cold, I kitted up with renewed enthusiasm ready to pick up the baton.  Jason was incredibly pleased to see me in transition, I thought he was going to kiss me! He had resigned himself to having to ride to the finish but had lost all remaining gels on the previous lap leaving him short of energy. Inspired by his efforts, I hit the first climb hard keen to see what I had left in the tank. A fair bit was the initial answer as the big ring was turned easily up the fireroad ascent. I was smiling again, the sun was shining over the Highland snow once again and I was carrying good speed around the course not far off my early pace. That lap was completed in 43 minutes and we had closed the gap on the leaders. I rolled straight into the next lap trying to keep momentum and maybe even complete that before the 10am cut-off but it was not to be. I finished just a minute after the end of the event; just about keeping the leaders in sight and prising open the gap to third. The finale was a mix of relief, satisfaction and elation; relief to finish in good health, satisfaction in overcoming the challenges to finish on the podium and elation due to the bacon and egg roll that was waiting for me at the finish line. The cold never bothered me anyway! [caption id="attachment_9097" align="alignleft" width="300"] 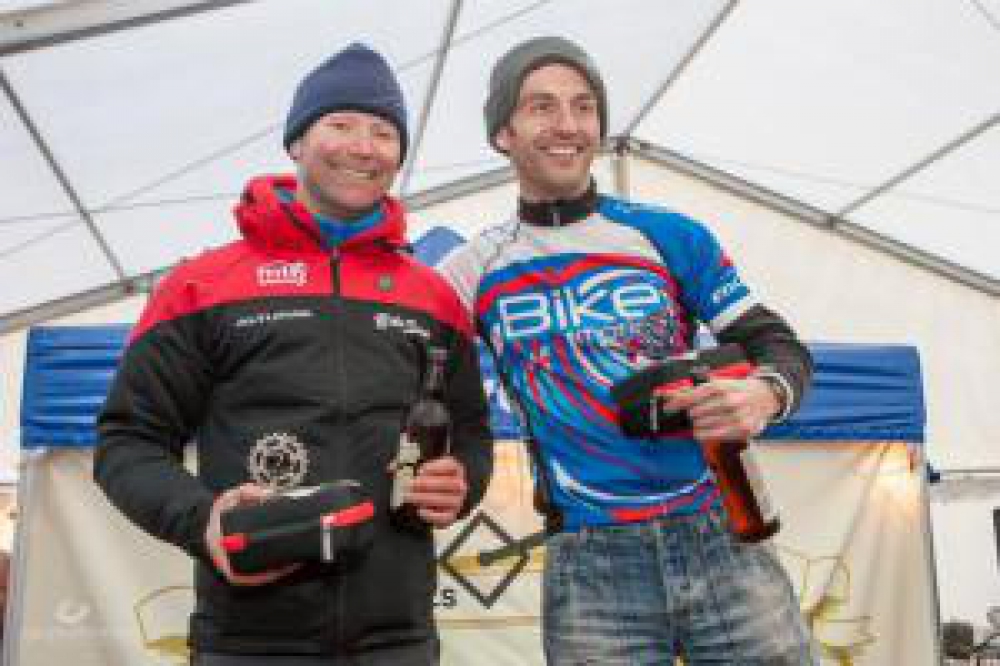 The cold never bothered me anyway![/caption] Special thanks to the following:- Jason Hynd for convincing me to race this crazy event, being a fantastic race partner and carrying the load alone when I needed a sleep. Rich Wilson for incredible levels of support; looking after bikes, bodies and quite literally everything else we needed. All we did was ride, Rich did absolutely everything else! Bike Motion Racing for all the support for the 2015 race season. John and Tom from Exposure lights for helping with top drawer lighting throughout the longest night I’ve ever known. All the marshals and fellow racers who offered so much support and created such a warm atmosphere out on the course despite the sub-zero temperature.