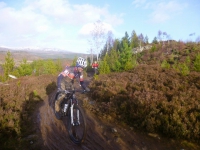 Sometimes a race report arrives at UKXCNews that demands your instant attention; a read so good you just have to grab a brew (maybe a biscuit too), stick the phone on silent and find yourself a comfy spot. This is just that type of report! Settle down and enjoy the 2016 Strathpuffer through the eyes of Mr Rich Rothwell...

Motivation can take many forms. Sometimes that Magic M can come from positive experiences like a new sponsor, a progressive racing season, or lots of fun riding. Sometimes it can be born from difficulty and life changing adversity.

I was motivated to race the 2016 Strathpuffer in the solo category. Motivated primarily by a desire to race a 24 ‘properly’ again. The last two years have been difficult physically; in late spring ahead of WEMBO at Fort William in 2014, I had broken my collar bone and ribs leaving me with lots of strength building to do and a small window for quality on the bike endurance training. My race went well, except the final few laps where my shoulder strength collapsed leaving me weak and struggling to control the bike. That lack of bodily control was unnerving and I wondered if I would be able to address the imbalance over the long haul.

Fast forward to the UK National 24 champs, again at Fort William in 2015. Training had been going VERY well. Arguably the form of my life…. Then I made the school boy error of riding something on the edge of my technical ability and BAM; a broken humerus accompanied its best mate, the torn rotator cuff. Ouch. That REALLY hurt! Frustrated by the amount of training time I had clocked up, I battled through four weeks of (mostly) road riding and physio, naively thinking I could get through a 24! Not so! After 8 shaky hours I pulled out (the first time I have pulled out of a 24).

So after endless press ups and planks, I thought I MIGHT be able to get through the notorious Puffer, despite a significant amount of persistent discomfort in my right arm and shoulder.

I was motivated to try and win a big 24. Despite numerous 24 solo podiums, I have only won one, my second; Relentless 24 back in 2008! This has long bugged me!

As it turns out, I was pitted against a rider with a completely different type of motivation. Motivation that truly lifts a rider’s level and puts the pain of a 24 solo into a shadowy context. I will let Keith Forsyth, the eventual solo winner of Strathpuffer 2016, to explain:

"It was the 13th of August 2015, Edinburgh Royal Infirmary, and Ben and I were in pieces. We'd just been given the devastating news that Ben has a very rare genetic heart disease called Arrhythmogenic Right Ventricular Cardiomyopathy (ARVC). This is a progressive disease with two faces, one, which requires Ben to keep his heart rate as low as possible to prevent a rapid progression of the disease, and two, the risk of Sudden Cardiac Death. This was terrifying news.

This came as a particularly cruel blow to Ben, who until then had been a very keen cyclist. He now had to stop all riding, training and racing immediately. Ben had shown great potential over the last few years. In 2012 at age 14, he along with 3 of his 14 year old mates formed the team 56 Combined, and won the Strathpuffer Quad category and the race overall. Ben was also shining on the road and track, and in 2013 he was crowned British Under 16 Road Champion, and won multiple Scottish Track Championships over 2013 & '14.

In the days following the bombshell, I spent my time scouring the internet for information, and educated myself on the disease. In the weeks following the family did everything possible to support Ben as best we could, and nothing else seemed important. Bikes became irrelevant.

Ben had been diagnosed with an irregular heartbeat at a Cardiac Risk in the Young screening in May 2013, but after exhaustive testing including MRI, he was told there were no abnormalities with his heart and he was free to continue his passion for racing.

2014 proved a challenging year with a 'flattening' of form on the bike.

2015 started where '14 had left off. Then things got really bad, Ben was struggling for breath whilst racing, and feeling like he was going to black out. Coincidentally, it was at this time he received a follow up appointment for another MRI check up on his heart. We got the shocking results on August 13th.

My talented son was forbidden to ride bikes, I had lost all interest in cycling and just wanted to spend time supporting him. I couldn't face going out training whilst Ben was stuck at home, so we spent hours walking the dog along the beach, chatting and trying to make sense of it all.

By mid October life had settled down a bit and we were all slowly coming to terms with Ben's condition. It was then that Ben came to me one day, and asked why I hadn't been riding much lately. We had yet another heart to heart, and he gave me quite a hard time! He reminded me that I had entered Relentless 24 which was coming up in 2 weeks, and the Strathpuffer was not that long after.

He expressed how keen he was to support me in the pits, and suggested I get my finger out!!!

After some serious soul searching, I decided I should push myself on and dedicate my efforts to Ben.

Relentless 24 went as well as I expected, a very long training ride in reality. After that I knuckled down to some serious training, with Ben always in my thoughts whilst out riding. I visualised winning the Puffer for him.

It was January, and the time had come to head North. The training over the last few months had gone well, and I headed to the start line with more drive and determination to win a race than EVER before..." [caption width="480" align="aligncenter"] 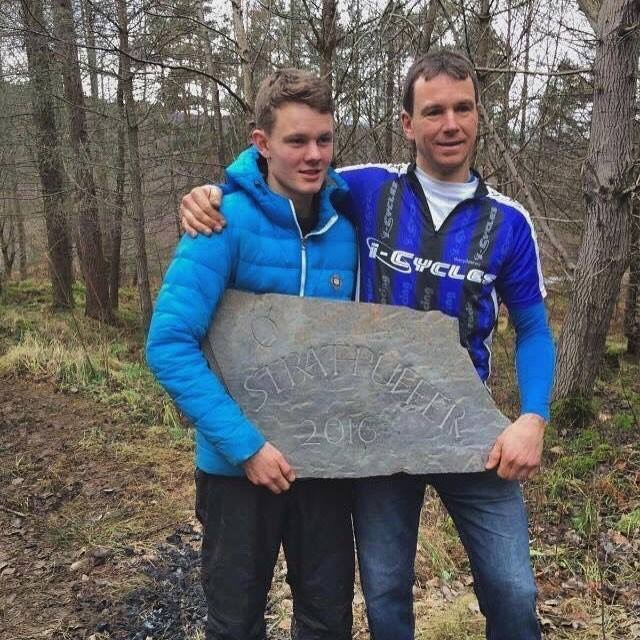 For more information on Cardiac Risk in the Young and screening, head to http://www.c-r-y.org.uk/

I was blissfully unaware of the motivational time bomb I was up against! I had been aware of Ben’s condition but not the impact it was having on Keith’s mental strength. Nor had I taken much time to think about the enormity of the task ahead of me; arriving late to the race site resulted in a last minute scramble to the start line! That was probably for the best!

It was warm. Ridiculously warm. And sunny! We knew it would be muddy as only days before snow and ice had melted in a sudden thaw. It couldn’t have been any different to last year’s low temperatures of minus 3 when myself and Phil Simcock (Team JMC) won the pairs race for the second year running. This year Phil and my brother Jamie had made the big trip up to support me which I was very grateful for; this is not lounging in the grass Mountain Mayhem style! As it turned out, the extreme cold of the previous year was much easier to cope with than what followed!

The Puffer lap is fantastic; a long climb that is never so steep to prevent a good rhythm, even when exhausted. The top rock sections are physically demanding but great fun; xc with a hint of rocky trials. If anywhere was going to test my shoulder out it was here! Despite the slurry and the mess, it’s mostly hard surfaces and one reason why it works as a winter endurance course. Unfortunately there was a sting in the laps tail that caused all kinds of carnage… 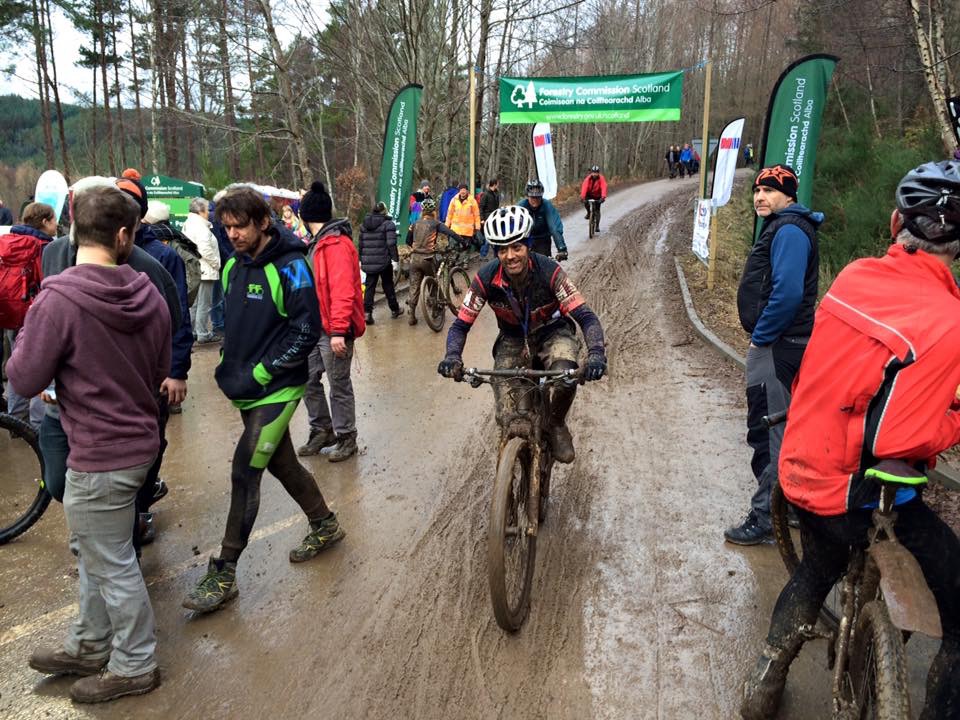 The first lap went fine. I was aware that Keith had made one of his trademark fast starts and I was comfortable letting him go. The end of the lap hinted at problems to come; the lap finish had been rerouted through unsurfaced woodland and ‘fresh’ gravel (cat litter?) had been put down for the final 30m. It had not been fully ridden in. It was sticky by the end of the first lap. Only a few more and it was disintegrating fast; it was clear how this was going to end!

Keith crept away. In retrospect I was too blasé. I underestimated him. Unaware of the motivational fire driving him forward.

Besides, with each lap, I was facing my own muddy battle. The lap finish was turning into a nightmare. I enjoy a bit of mud like the next rider but this was debilitating. My bike was muddy but relatively unaffected UNTIL that final 30 meters. By the time I’d ridden / dragged / carried the bike through it, me and my bike had gained 5 kilos. There was simply no way around it. Climbing back to my pit half a mile back up the climb was even more torturous as I listened to a brand new drive train disintegrating…. Keith’s pitting position just past the transition was a far better pick. I wanted to stay on my full suss due to the rocky nature of the course so spent a lot of valuable time keeping it moving.

Around ten o’clock, and after some advice from a fellow rider to not take risks descending when solo, I erm… hit a descent flat out and immediately crashed. Aaaaaaargh! I screamed like a baby as I experienced that intense pain one enjoys when landing hard on your knee. (Ok, I actually bellowed like a big manly man. Honest). Standing up hurt. Pedalling hurt. Jumping up and down shouting “Aya Aya Aya” hurt. So nothing for it but to pick the lumps of gravel (and bits of cycling tight) out of my knee cap and keep moving. Nice. 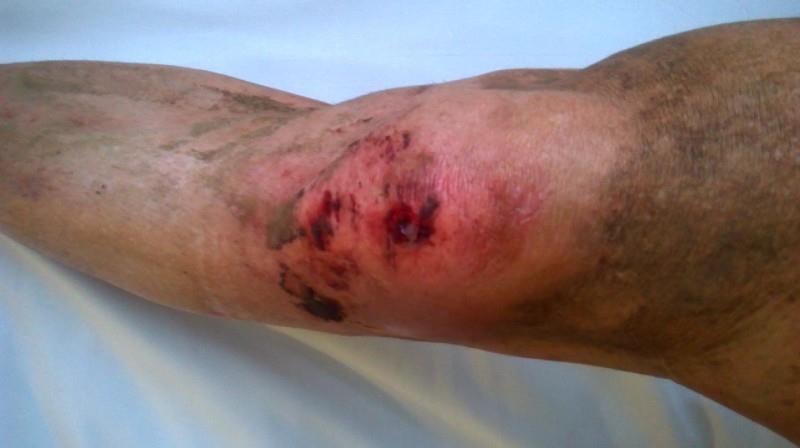 The gap continued to creep up as the eternal night wore on. I really did not think Keith could keep this pace up but he was doing it. My motivation was low. I was bored and frustrated and wading through the metaphorical treacle of that lap finish was wearing me down further.

Then I finally got truly motivated for the first time. Keith caught me with five hours to go. Noooo! I had never thought this would happen. So we chatted for a few minutes and out of the blue I sprinted off. And it felt good. Suddenly I wanted to race. Too late? Probably. Better late then never. Definitely. I was taking back big chunks of time; 40 minutes in the space of a few laps. I was enjoying myself. Hampered by a muddy bike but full of fire for the first time. Neither of my shoulders had given way which was a major positive. This filled me with confidence for further long haul races. Not to mention a bright future changing light bulbs.

Nonetheless, it was too late. I closed the gap to twenty minutes but Keith responded with an impressive late surge to take the win. Saul Muldoon rode a superb race on a singlespeed to take 3rd; even more impressive given he snapped a chain and finished the last few laps on a fully rigid machine. Yoiks! 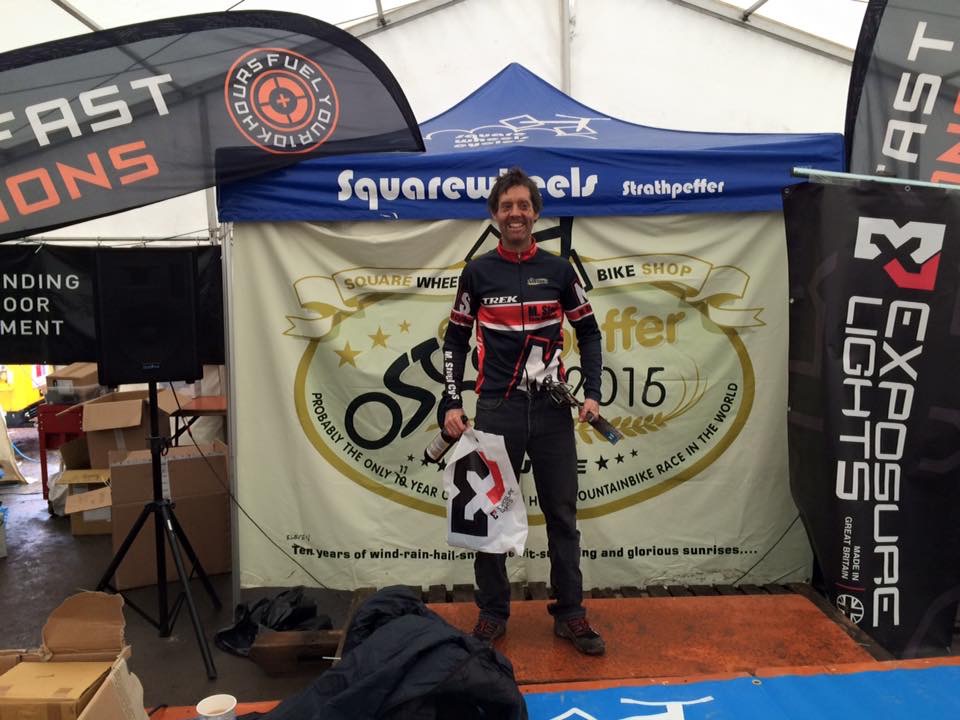 I was very disappointed to not win. No denying that. Solo 24s are hard to win for all manner of reasons. I was motivated to train for sure. Was I in a winning frame of mind on the day? Certainly not on the first day of the race.

Keith and his son face a difficult and emotional future that really puts the pastime of bike racing into perspective. I’m delighted for Keith and Ben. They won that race together and its significance was clear to see in their faces, amongst their pit support, and a very supportive crowd. Well done.

My brother Jamie Rothwell and Phil Simcock (Team JMC) for supporting me.

M Steel Cycles for their ongoing support and lots of last minute work on my bikes (They will be back with you soon for immediate refurb L) www.msteelcycles.co.uk

Schwalbe Tyres www.schwalbe.com (I was looking forward to using my Ice Spiker Pros but didn’t get the chance!)