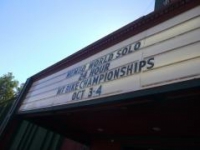 The Roc d’Azur is one of the best ways to end a season, a few days of racing in the sunshine with a great chilled out atmosphere. It’s one of the biggest events in Europe with races starting on Wednesday before culminating with the main event, the Roc XC on Sunday. This year across all the events there were 20,035 participants!

I flew in to Nice on Thursday morning accompanied once again by my good friends Rachel Fenton and Chris Peddar. The Esterel coast road from Nice to Frejus is incredible so I opted to ride the 60km to Frejus rather than take the hire car. After a stressful few days at work this was the perfect tonic. 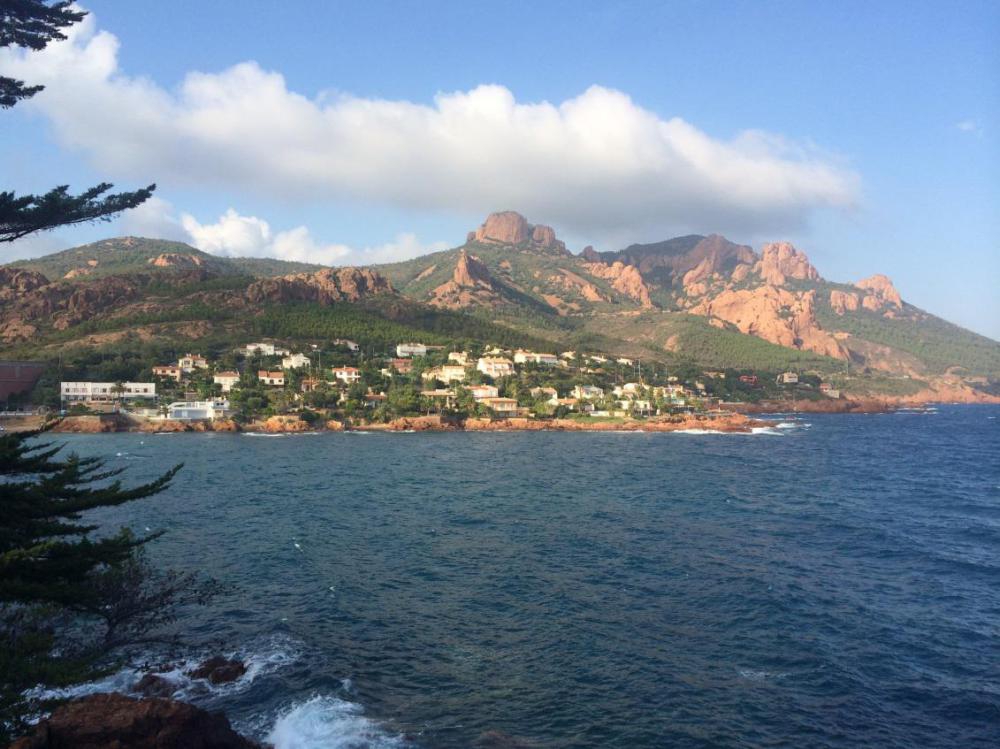 The Esterel coastline, not a bad place for an afternoon spin..[/caption]


First up for me was the Roc Marathon, an 85km single loop and part of the UCI World Marathon series. We didn’t have the ideal preparation, spending Thursday evening fruitlessly trying to find a new rear brake for Chris’ bike. Dinner was late and the shops shut, so our breakfast supplies consisted of the few mini-porridge packs I’d luckily stuffed in my bag, split 3 ways this made a light breakfast!

The Roc Marathon is perhaps unique in that many of the top XC riders line up alongside the usual marathon guys. Throw in some pro-tour road riders and suddenly the front pen is looking a bit crowded! So unfortunately I didn’t get a gridding in the Elite pen, but was in the first wave just behind. It really was a bit of a scrum as 600 riders fought to get into the gridding pen. There were around 5 rows of elite riders, then the elite ladies, then the pack chomping at the bit to get going! Fortunately I got a good start, a strong head wind across the huge start field meant we didn’t start too quickly and no one was overly keen to be on the front. A bit of weaving, a quick bit of nipping round the side and I was on the back of the front group. Getting to the front was made even easier as we came across a large muddy puddle across the track. I guess it doesn’t rain too much round here so while everyone took a big detour around the edge I made like Peppa Pig and went straight through the middle! Another 10 places further up!

The first climb was a steep one and although I felt good I dropped back a bit, to around 25th. Still I was a bit surprised to be this close to the front still. We then tore down a rocky descent, I did my best to follow the lines - oh so we’re not going to brake then, ok! Part of what makes this event so fantastic is the incredible support along the course from the spectators. The bottom of the descent was packed and the atmosphere was brilliant, the cheers made you feel like you actually knew what you were doing!

We then hurtled along some flatty bits, feeling strong I pushed on. The course continued with viciously steep climbs and fast rocky descents, there really was nowhere to recover. A couple of the of the climbs were short run ups and I felt great, picking up the bike and sprinting up before leaping back on and charging on. Despite being early morning it was already in the low 20s and the sweat was literally pouring. Riding up the main climb at around 55km gone it felt like my head was going to explode. This was more like summer than mid-October! Towards the top I started to struggle so took two gels before stopping to refill my bottles at the feed. With the other guys having support and not stopping it was a big effort to get back on to the group. On the next technical descent I lost my front wheel on an off camber bit then took silly risks trying to get back on which almost ended in a face-meet-rock incident!

On the following fast, undulating section I was really struggling, then on the steep, loose climb I blew my doors! This wasn’t a small slowing down, but a fall blown mid-winter ride bonk, resulting in much comedy weaving and maybe a little dribbling! All remaining gels were quickly necked as I headed on to the climb up the col de bougnon. The climb was lined with spectators who were amazing in their support and it was really gutting to feel so rubbish. Riders were now passing me constantly and I had no response, the tank was well and truly empty. The final part of the race has some incredible sections, some tight and twisting singletrack, before the infamous beach sections. I did manage to clear the sand sections before falling off the side of the ramp next to the steps, nice one! In the past I’ve made up places on the long windy trek back to the arena, today the boot was on the other foot. The end did finally come, I ended the day in 54th. I was pretty disappointed having been mid 20s. But as they say nothing ventured, nothing gained! 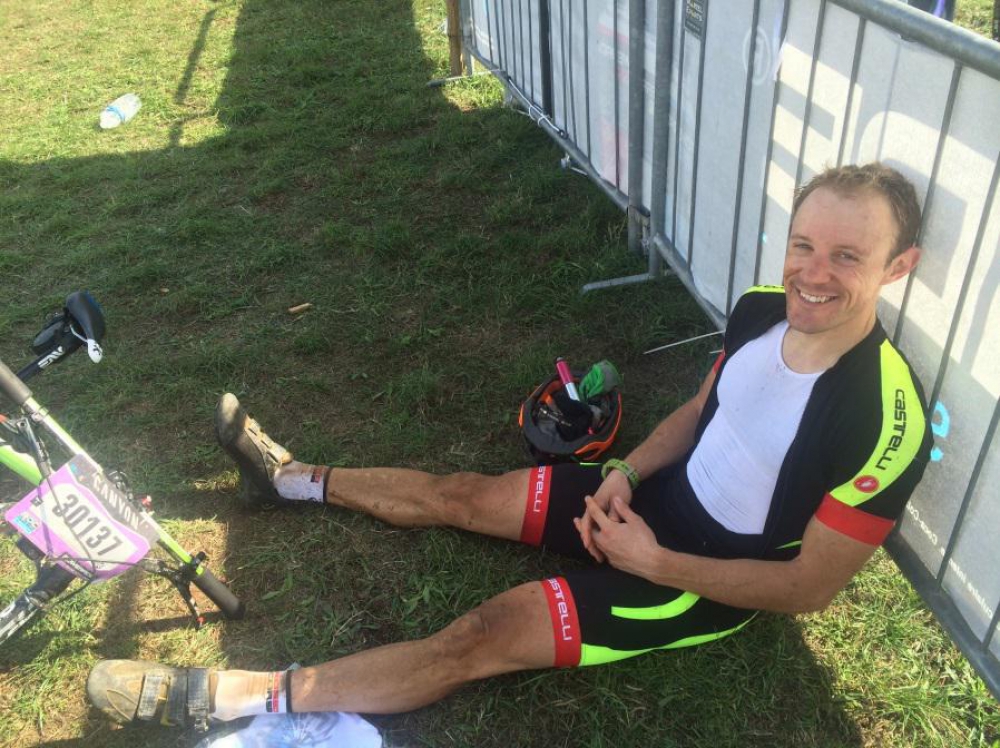 
Next day, having smashed my way through a tonne of cheese and fruit cake at the finish, I felt better. As we’d been unable to source a replacement brake for Chris’ bike I promised him mine for Sunday’s XC event, which meant I could head off into the mountains without worrying about the XC. The riding in the mountains was incredible. Quiet roads snaked through gorges and small villages, with the roads lined with trees turning brilliant shades of red and yellow. Around 3 hours in and at the furthest point from home we got a text, a spare brake had been located, I could race tomorrow. Great! 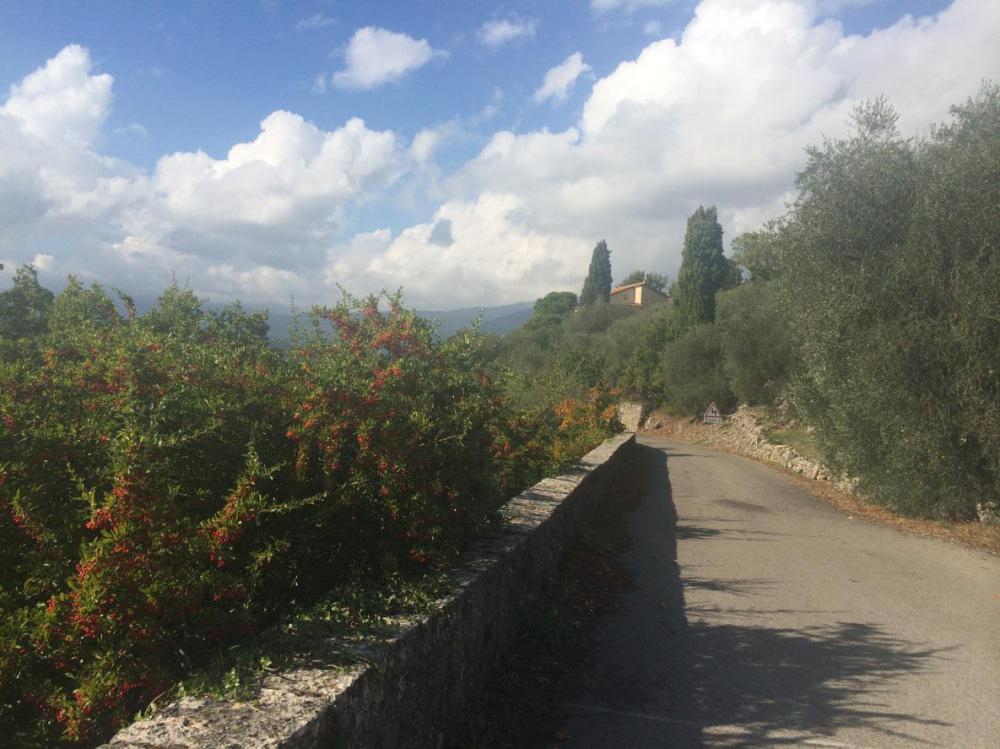 
So, the top priority on arriving home from 135km the day before the XC was to eat. Lots! The XC is 55km so a bit longer than normal - a single loop and uses all the best bits from the marathon. Sunday morning came and I actually felt pretty good riding over to the start. Unfortunately there was a bit of wait as our race was postponed by an hour, but soon enough I was scrambling around as once again 600 odd riders tried to force their way through a small gap into the gridding pen, pedals and spokes became tangled, it all bore an uncanny resemblance to sheep herding! There were even more spectators for the main event, in true Euro style the presenter urged the crowd to “clap your handz for ze riders” as immense Euro-pop got the adrenaline going! The start was quite frankly, mad. We tore off and everyone knew that in around 2km there was a bridge... wide enough for one! So we all had the same idea which was to get to the front. There was swerving, puddle surfing and a few slides on the dewey grass before the inevitable happened and we all ground to a halt pretty much where we had started, which sadly for me was around 200th! After a bit of standing around at the bridge going nowhere, we got through.

There seemed to be a very large range of abilities in the front pen which made the first descent pretty interesting. A variety of techniques were adopted, from the youthful letting go of the brakes before slamming into anything solid, to the more reserved brakes fully locked, slowly we go! Cutting your way through other riders on an already steep and tricky descent just made it that bit more exciting! After the descent it spaced out a bit and I got going. The legs felt amazing and it all got a bit “no chain” esque. I picked off riders all day, feeling super strong the climbs felt easy and as my confidence rose I seemed to fly through the singletrack on rails. Approaching the col du bourgnon with around 15km to go, you could hear the noise of the crowd, it was incredible. I was counted through in 106th. I’d made up so many positions, but I pushed on with the top 100 in reach. Just up ahead was member of the Cofidis pro road team and I gave it full gas to hammer past which the crowd loved! I flew through the singletrack and down onto the beach. All the riders around me were in the elite pen, it was a huge morale boost to be picking of riders, the lower their number board the better! Onto the final road section I wound up my biggest gear into the headwind, sprinting past riders so they couldn’t jump on my wheel. On the bumpy approach to the finish line I finally ran out of puff, discovering my bike did actually have a chain after all. One Italian rider had stuck on my wheel since the beach. Apparently unable to come through (it’s no possible..) he magically found hidden reserves to fly past in sight of the line! No matter, I finished 78th in probably the best ride I’ve had this year.

So after 4 days our adventure in the south of France was over. There is surely no better way to end a season than here, the whole event is just incredible. The courses are superb, the organisation super slick and the support the public give is just amazing. This was my fourth roc, it won’t be my last! That’s my last big mountain bike race for the year so time for some much needed R&R before we start looking ahead to 2015. A huge thanks if I may to my sponsors; Renvale, Revel Outdoors, Cycling Sports Group and Extra UK for keeping me fed with yommy Clif bloks and bars and sat very comfortably on Fizik saddles. 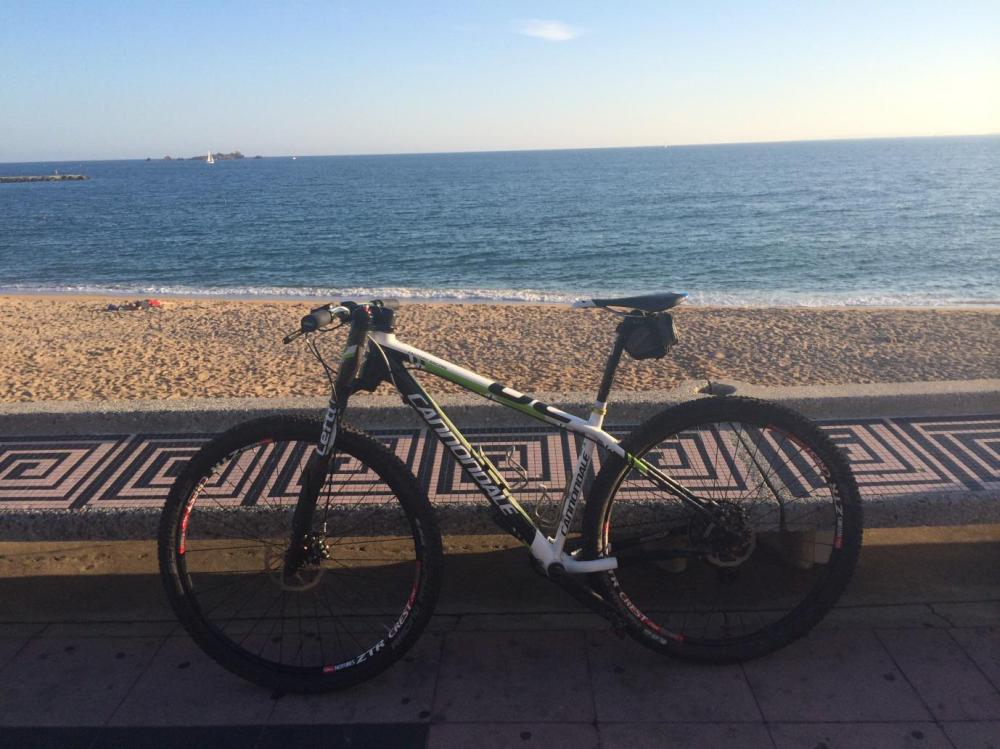 Bike and rider soak up some Vitamin D before heading back to the UK, see you in April sunshine![/caption]