By Scott Cornish - Riding for Niner/GoreBikeWear/Ergon

I like hills, although my descending ‘skills’ leave a lot to be desired, so it was off up north to mid Wales for round 4 of the Red Kite Events winter series. 2 hours plus ½ a lap. With a decent amount of snow on higher ground, I wasn’t sure if a fat bike would be more suitable. Not that I actually had one anyway. Arriving at the Coed Trallwm trail centre I was wishing for that fatbike, snow covering all the exposed trails and the start climb, but that was part of the reason for coming out here, to have some fun racing in the snow :) 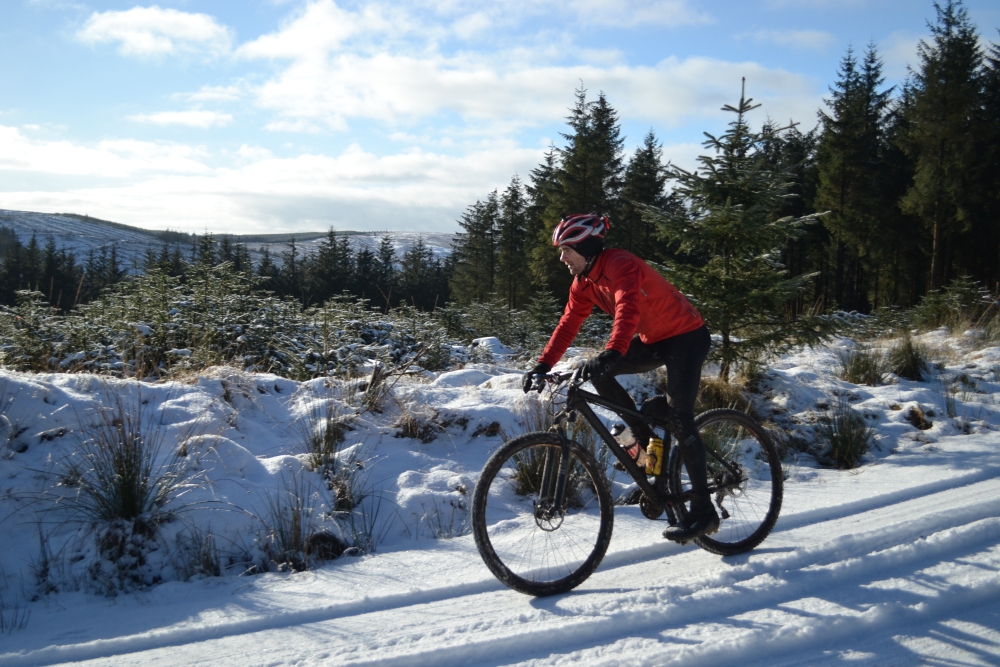 
Full winter GoreBikeWear was called for, including some thermo overshoes. Although the sun was out, the temperature remained super low. Feeling the cold in my vets years.

A junior rider took the lead off the line, setting a fast pace up the long climb along with Chris Shroder, quickly hitting the red. His initial burst of power waned about half way up though, all 3 of us settling into a more ‘appropriate’ tempo. Staying in the more compacted snow of the tyre tracks, it was surprisingly grippy, stray off them though and it was like riding through treacle. The snow at the top was softer and more rideable. A brief muddy, technical singletrack descent dropped us onto the 2nd part of the climb. Grip was surprisingly good in the deeper snow, most of the time. The tree-lined singletrack leading to the top of the descent was virgin snow, the 3 of us making the first tracks. Wheels constantly wandered sideways, the last steeper section had us walking, wheels finding the limits of grip in the white stuff. 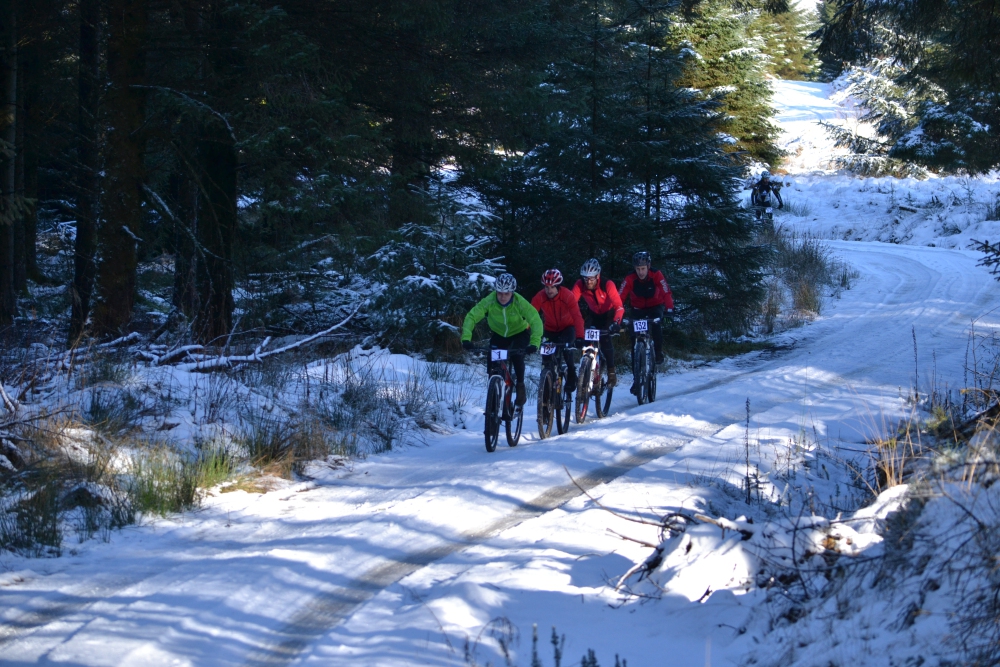 
The upper part of the descent was deep in snow, the bike drifting through the turns. Once in the trees, snow gave way to mud. Half way down, a 4th rider joined us, Nick from Climb on Bikes, my lack of descending skills allowing the others to get a gap.

Catching back up on a brief climb out of the carpark, the singletrack back down to the cafe was fun, just managing to hang on.

A small loop along the riverside singletrack and a couple of brief climbs took us out onto lap 2 and the long climb. We played cat and mouse for the first 2 laps. I would get a gap on the main climb, then again on the climb up to the top of the hill, but all too soon they would be back on my wheel itching to get past on the descent. Bravo sirs, some superb descending. Wonder if a good trail coach can teach this old dog new tricks?!

Chris was slowed up by some mechanicals and the junior lad was off the pace on lap 3. Managing to put some decent time in on Nick on the main climb, he didn’t catch me until half way down this time. I just plugging away on each climb, and tried to remember how to descend on the way back down. Speeds increased as the snow compacted, as did the complacency, almost losing the front wheel a couple of times.

On lap 4 I was expecting the same, Nick to be kicking at my heels at any time on the way back down, but there was only the sound of my clattering chain. Out for the 2nd half of the loop I was on my own, save for a few folks I had lapped.

Once more up to the top and back down. I hadn’t mastered the twists and turns of the hillside singletrack descent, but I think that I was going a little faster at least!

I had done enough to pip Nick to the finish. He wasn’t far behind though. Chris had suffered a puncture and a snapped chain, but fixed it all trailside to finish.

The weather was amazing, strong winter sunshine and I wasn’t lamenting the lack of a fatbike, the snow giving surprisingly good grip. The Continental X-Kings offered superb grip.

It’s a great venue at Coed Trallwm for tough laps and one for the skilled descenders.