After a very damp night that had me grateful yet mildly perturbed the solid downpour would continue through the morning we lined up in cooler conditions to tackle the penultimate stage of this years Epic.

I hadn’t wanted to trouble my team mate, Scott Cornish, but the invariable ’stage race wobble gut’ was starting to take hold. You simply can't consume this much energy drink, gels, powders and potions without something going ‘what exactly are we doing here?’

But the cooler morning, the simply stunning surroundings of Boschendal and the constant vibe of riders who are now feeling like comrades-in-arms meant I suppressed my shaky disposition. 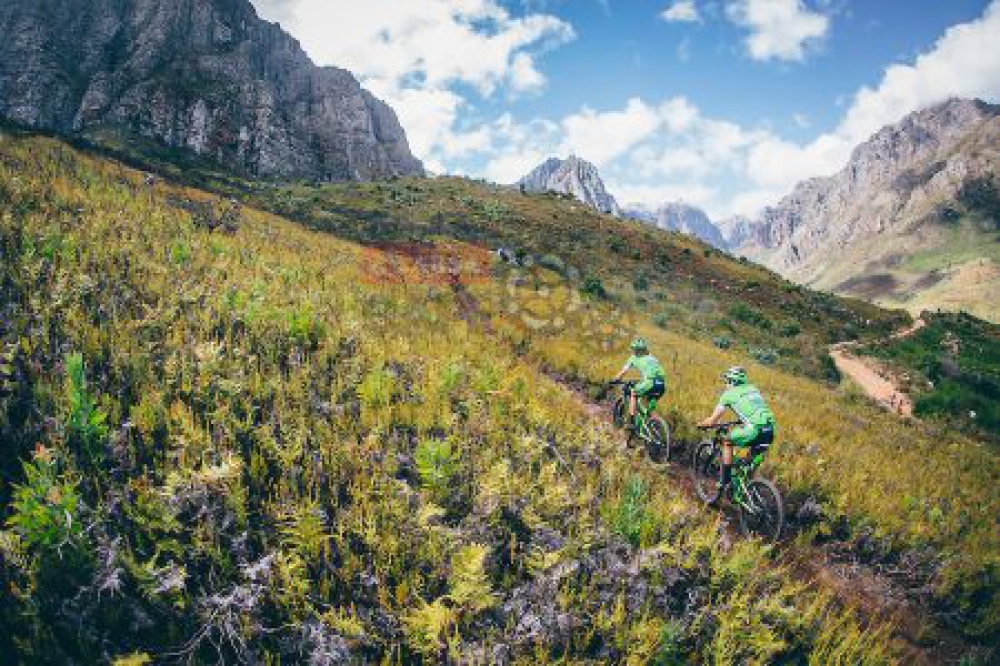 As we rolled out, the legs were very unhappy, two big useless pistons lacking any form of hunger for what lay ahead. The pace is always punchy at the start and I figured 'well, lets just do what we can', thankfully a few tight ramps meant the front bunch got slowed down enough for me to not have Scott wondering if I’d turned back. Stranger things have happened, within 5km you have riders yelling for their partners, stopping, looking about and generally not concentrating. Splat! Your chap gets flattened and is literally howling in pain, he’s lost ALL the skin on one elbow, big ouch.

Today felt like another showcase stage, ‘lets show you what we’ve got’, constant singletrack, undulating, rolling, beautiful then suddenly, mud! Oh hell, the gloopy hell I usually revel in was no party for roughly a kilometre of fast off camber trail, riders dropping in front of me, riders trying to get past, it's a case of hold your nerves, be safe and confident, don’t relent or you really will get edged out on a rubbish line. A quick mud expulsion and off we fly again, our French mixed team buddies from Open Kappius are running well but there are some new kids on the block, Trek Israel are flying and clearly have a stage win in mind. Jeff and Fanny seemed unfazed, they are almost an hour in front, consummate professionals its time to keep themselves and their equipment in one piece, Jeff still happy to give me a healthy shove up one of the pitches, ‘merci beaucoup Jeff!!’ (Jeff is tiny, certainly packs a punch!). 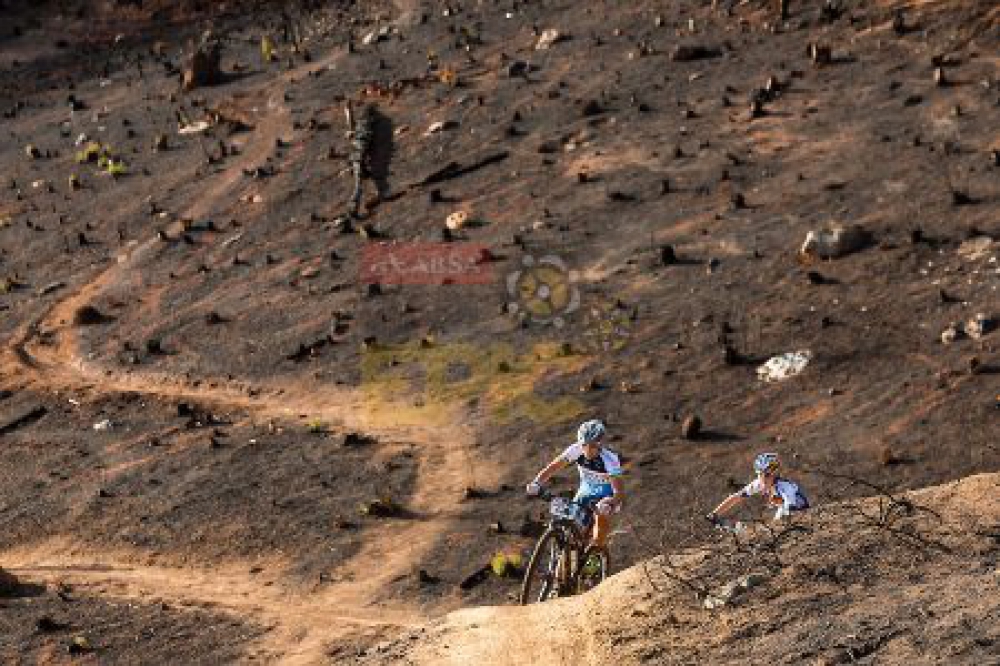 As I finally warmed up, I was feeling slightly happier with the tight singletrack sections that meant, as much as we were being held up, I got to have a bit of a breather. Scott is like the enemy within, he is riding so strong I’m in constant danger of blowing up completely! But give up is never an option, and I think after 7 days racing together we’re pretty dialled in. Rather than slowing right down and detaching I’m grabbing Scott’s pocket where its safe and Scott relents when I’m desperate for food.

The undulations are constant, so many peaks today I was losing count, ‘are we at climb 3 or 7?’ Who knows, aim for the finish, concentrate, breathe, breathe, rhythm, rhythm. Just keep going. Water points at the Epic are a real treat, you are clapped in, announced, encouraged, fed, water, chain lubed and sent on your way. Yesterday there was an amazing moment at water point 2, a full Cape Carnival, further on a family playing violins and flutes, just quirky unique brilliance. Today we spent most of the day holding back Joel Stransky and David Cooke from team LiquiFruit, so hearing ‘Team Momsen Bikes leading in the 95 World Cup Legend…’ was AWESOME! But these boys weren’t here for a party, they meant business, and for the rest of the days 30km it was chop and change and do our best to hold them at bay. 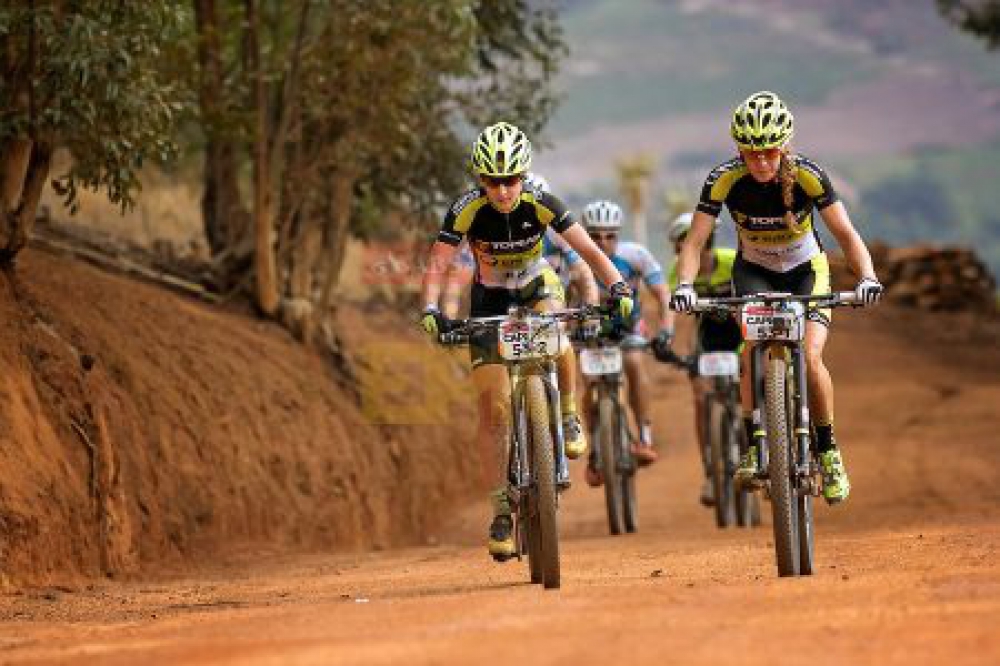 Scott could easily have ridden top 5 here, I say easily, I mean, it would be nice to see what he could achieve with a faster partner, but give him his massive due, he’s been riding his socks off for both of us. Most teams have mismatched abilities or mismatched days. And we’ve, touch wood, been extremely lucky even with our mechanicals to keep fighting this far, we’ve seen crashes, heard of illness and simple mishaps like rolled ankles in the camp site that have ended other teams campaigns, with one day to go we desperate to hold our top ten position.

Eventually the road turned and we hit the fast rocky run in for home, punctures everywhere! Nurse it home Spies nurse it home, the LiquiFruit lads passed us but I was happy, let's get in safe and get the recovery going. Today felt great at the finish, superb trails and a bonus that in the cooler conditions I was feeling massively less destroyed than yesterday. 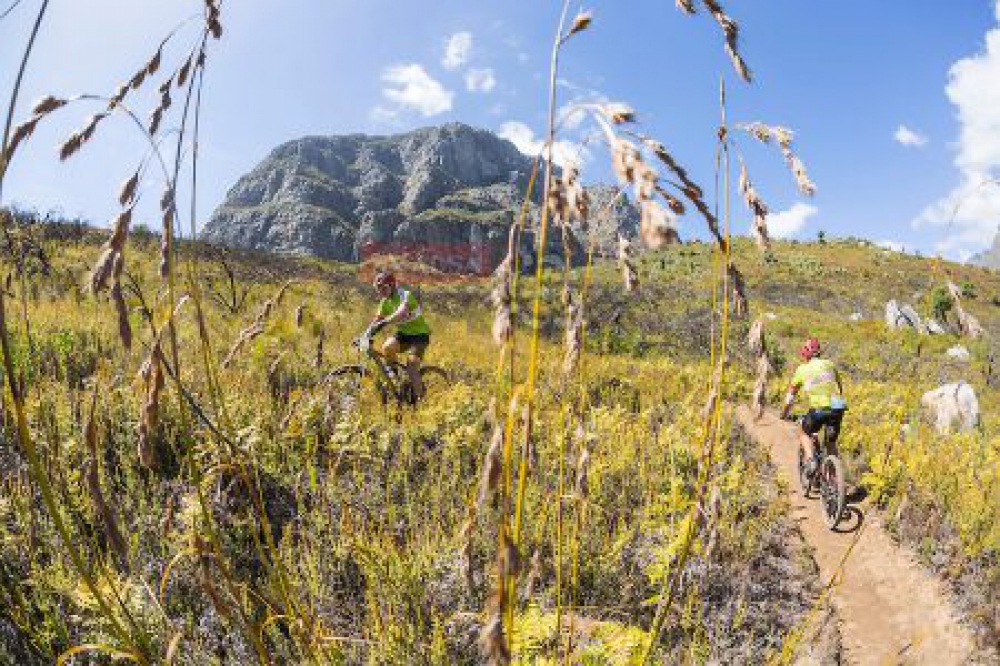 Just one more stage to go, Boschendal to Meerendal, 86km with 1200m elevation, it has truly been an amazing and humbling adventure, let's get the rest in and get this last stage done!