I love and hate that fact; I love being tested, I hate coming up short and I very definitely hate if factors out of your control conspire to mess with your head.

Todays stage around Wellington was a shorter day at 75km and 1850m elevation, effectively an ‘easy’ day but to my mind an absolute triumph, and by no means easy!

Scott and I were determined to make up for yesterdays mechanical, these things happen, you have to simply get back on your bike as it were and put the day behind you, off we charged The milder temperature was an absolute gift, I used my roadie background to keep well out the wind whilst progressively moving up the pack, knowing Scott would have no problem keeping up, I would have loved to have started a tad less aggressively but with a single track climb looming I figured traffic was the bigger enemy.

We were soon making up great places, as soon as you see guys you’ve not ridden with you know you are nibbling at the leaders, awesome! I was still very much maxed out, I had slept and eaten very well but my resting heart rate is way high. Its meaning I’m at my max quicker than I’d like and feeling like I’m hyperventilating getting over some of the sharper spikes. It's not a pretty picture!

I loathe being the weaker rider in a duo, this is what is hardest, any time you feel you settled into the pace nicely it gets notched up, my hunger to get further up the GC was definitely overriding my need to ease back, definitely not a masterclass in stage racing longevity but stuff it, I wanted top ten back! Eventually Scott was offering up the dreaded pocket, it felt like the ‘hoop of shame’, you don’t want help, ‘go away’ but if you want to achieve the goal, well, suck up the ego and get on with it! 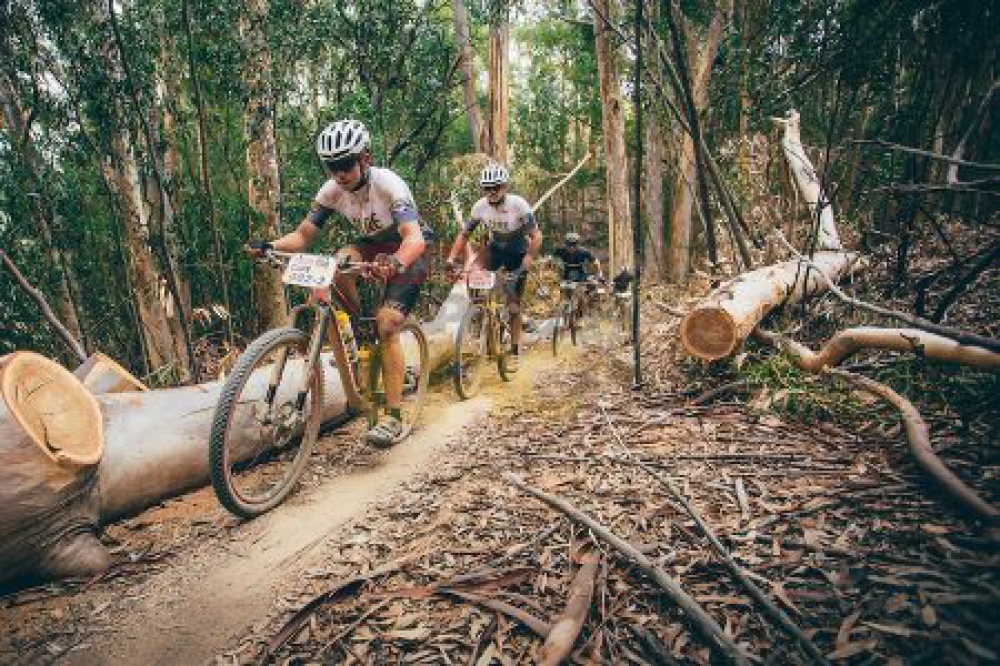 Dean Engelbrecht and Denis Engelbrecht during stage 4 of the 2016 Absa Cape Epic Mountain Bike stage race from the Cape Peninsula University of Technology in Wellington, South Africa on the 17th March 2016
Photo by Ewald Sadie/Cape Epic/SPORTZPICS[/caption]

We stormed along, I found my legs up a particularly nasty 24 hairpin trail with a nicely pacing bunch, this could all come together great. We hit the last water point and were just about to make our bid for home when ‘Damn!’ Scotts rear mech shears off after a renegade stick wedges itself into the holy of holies….oh hell. ‘We can fix this’ ‘no we can’t’ ‘well we’re damn well gonna try’ Mechanicals, the moment you want to swear at each and every deity, ‘why me, why now, why why why!!!’ But given I believe in the power of positive rage, we Jerry rigged Scott’s Vipa into the most over spec’ed single speed in history.

It was not a party the last 20km, Scott had been punching along like a machine but was now reduced to looking like a spinning cartoon and me barely managing to internalise my hatred for bicycles long enough to accept what will be will be. We got passed by rider after rider, group after group, why do we do this, why?! But after rolling across the line, tired, frustrated and somewhat numb to the world around me I saw the beaming crazy faces of the Cape Epic support crew and well, life didn’t seem so bad again!

It was gloves off in the pro divisions, men and women going toe to toe on trails that are well known to most of them, Karl Platt, our GC leader is practically a local so it was rather surprising to see the Italian Trek Sella San Marco pairing of Samuele Porro and Damiano Ferraro break the Bulls strangle hold on the top step. The day was not without its drama for the pro field, World Marathon Champion Topeak Ergon Racing’s  Alban Lakata was forced to call it a day with teammate Kristian Hynek of the Czech Republic due to Hynek's injuries he suffered the previous day, the Cape Epic title eludes them yet again. 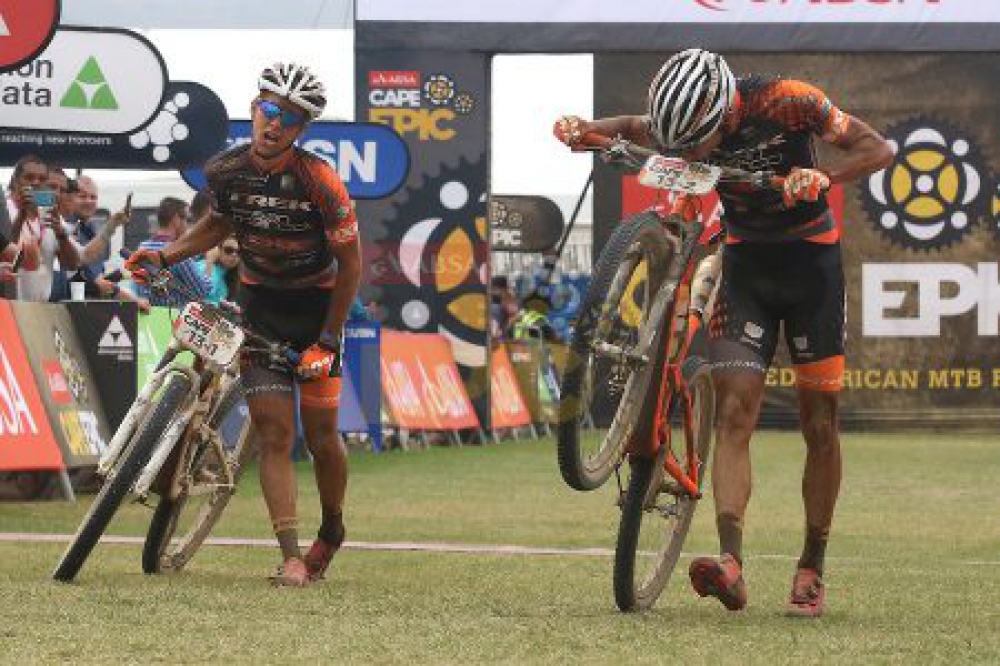 The women's field has been extremely hard fought,  only five seconds separated Spur-Specialized and Sport for Good at the finish of the stage, Arianne Kleinhans and partner Annika Langvad taking the win from Sport for Good.  Olympian Sabine Spitz of Germany seemed at completely at home in the fast flowing singletrack of the famous Welvanpas trails, her and Ukranian partner Yana Belomoina managed to open a gap on Spur-Specialized after water point 2 it was not enough to hold off the diligent patient pacing of Langvad and Kleinhans. 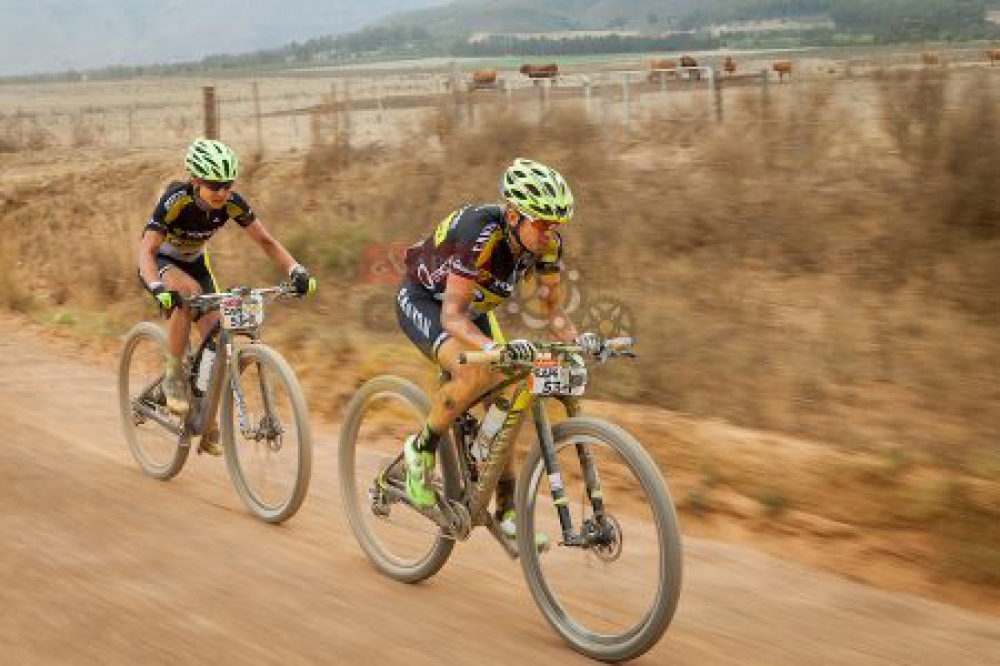 Spitz and Belomoina remain in third place overall, behind Topeak Ergon’s Sally Bigham and Adel Morath who lost 5 minutes to the leading pair and are sitting 12:49 behind Kleinhans and Langvad overall. Its fast and furious rain but tomorrow is a very big test for the teams a beastly profile of 95km in length and 2500m elevation this will be a real test for the top teams!

Onwards to Boschendal, not only home to some of the best wine in the world, our goal for Stage 5!