Stage 3, not dissimilar to stage 1 in length and height gain, it was going to be another long, hot day in the saddle, but this time ending at the next venue town of Wellington and characterised by constantly changing scenery and some epic riding. This is an area which forms the centre of the Cape Winelands, located at the foot of the country's oldest mountain pass Bain's Kloof Pass, a stunning pass which we rode up, but more on that later. 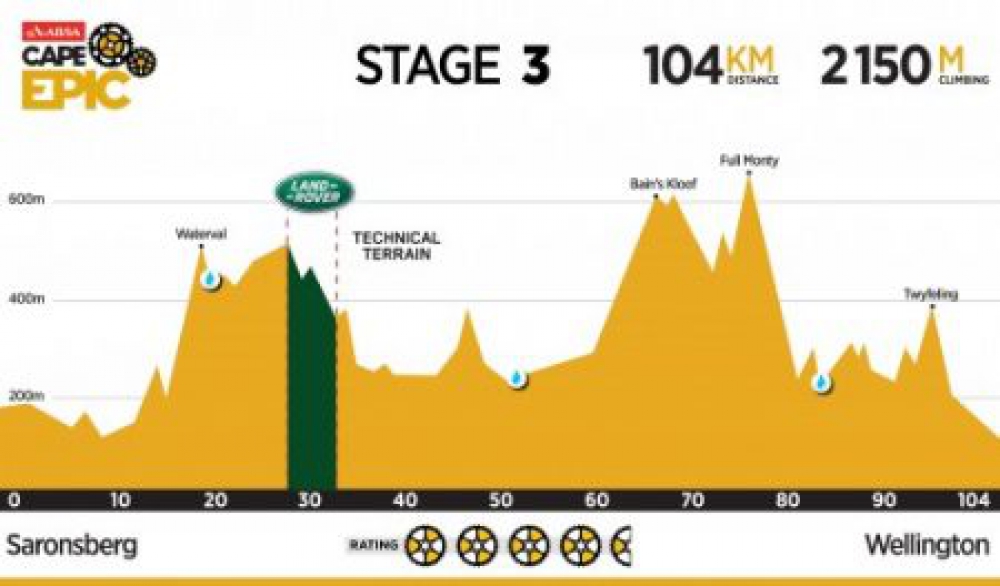 Breakfast is eerily quiet at 5am now, bodies starting to protest, any extra time lying down being welcome, but we had little time to spare with bags having to be packed and loaded onto the truck for the move to the next location. With bags packed in haste, we both had to sit on them to get the zips to close, but everything was in, just.

After the previous stage's 8th place finish and Stuart legs feeling the pace, stage 3 was to be a steady one, a bit of recovery time before the final 4 stages, but the start pace was anything but! Everyone shot off like it was stage 1, it become a dust ridden peloton for the first flat 10km, sketchy moments where we couldn't see at all with the early morning streaming into our eyes and the haze of dust. I just don't have the speed in the legs like Stu first thing as he moved well with the peloton, keeping up the speed correlated dirt roads was tough. 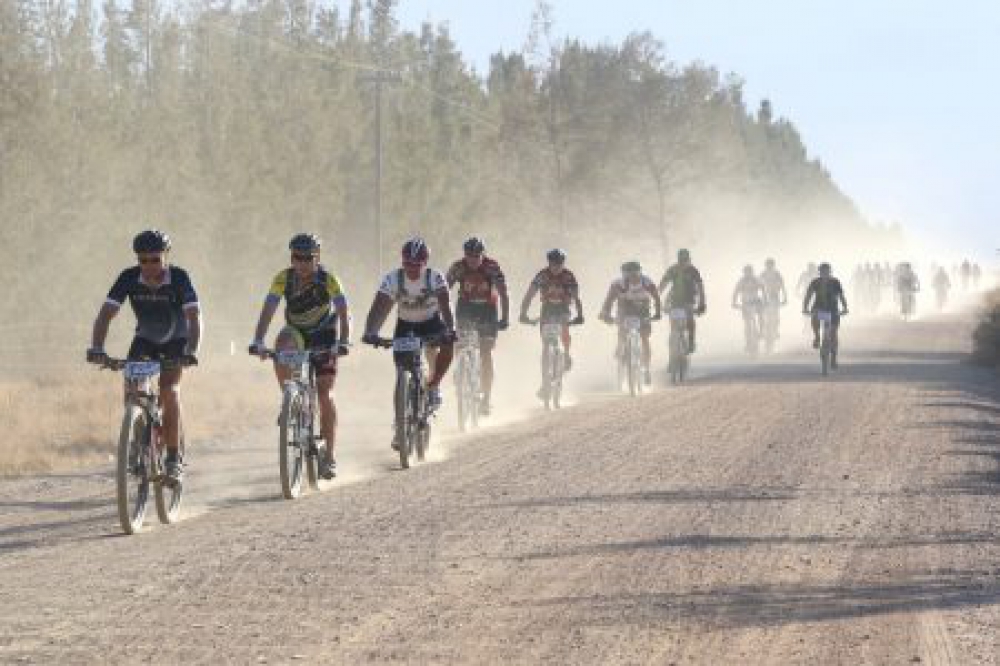 Then it all slowed up and the group fragmented as we hit the bottom of the 10km climb, rider's struggling to hold their line  on the loose rocky and sandy surface. It was double track but so stoney that there was only a single good line up, overtaking meant a ride through the looser sections, where wheel traction was minimal. Tempers were becoming frayed as wheels lost traction bringing riders to a sudden halt in front of others,  tiring bodies struggling to keep it going up the steeper parts.  Stu was keeping up a fine, steady tempo as this was going to be a long day. 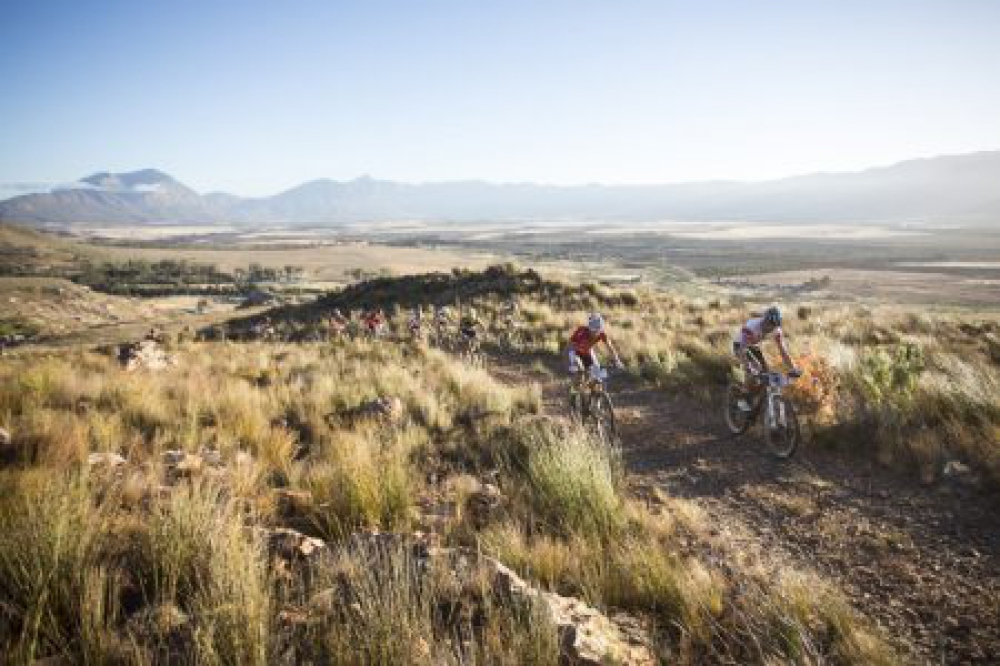 A brief descent down a rocky track along the mountain side gave the legs some respite before a small climb to the early high point. Ridge high up across the mountain plateau was spectacular, cloud covered higher peaks all around. Any technical descent is well signposted here with 3 arrows and this was a good one, dusty and loose in the corners, wheels sliding round at speed whilst negotiating  the larger rocks to avoid the dreaded 'P'. The river crossing s cooled hot feet, but the silty water hid rocks under the surface as one rider discovered, his front wheel coming to grinding halt and him over the bars. he was ok though. 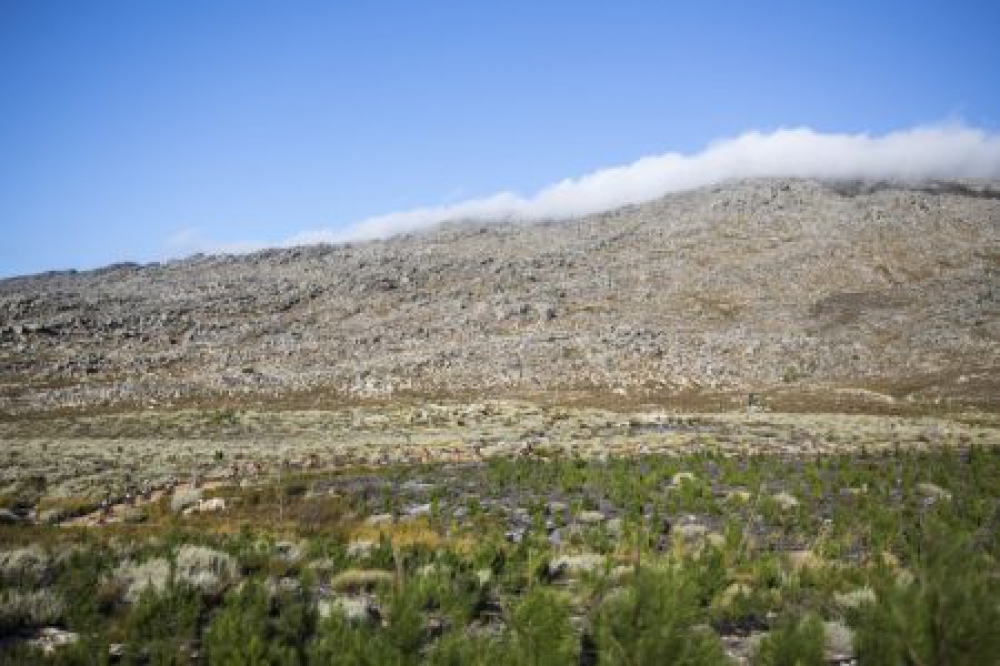 The lead bunch during stage 3 of the 2016 Absa Cape Epic Mountain Bike stage race held from Saronsberg Wine Estate in Tulbagh to the Cape Peninsula University of Technology in Wellington, South Africa on the 16th March 2016
Photo by Nick Muzik/Cape Epic/SPORTZPICS[/caption]

A broken freewheel halted Stuart's ride at the next water crossing. It was gone, spinning both ways, 10km downhill from the last feed and 20km along flat from the 2nd. We agreed for me to ride off, leaving Stuart with the tracker, to find assistance, a wheel or at worst a lift back for Stuart. 4kms along the track, I found help, a local farmer who volunteered his rear wheel. Amazing. I rode back to him so we could continue together. Immensely frustrated at being now well out of the top 10, it was ride or bust. Mentally we had to bring it back. The next few kms were flat with a brief pointy climb, TT mode. 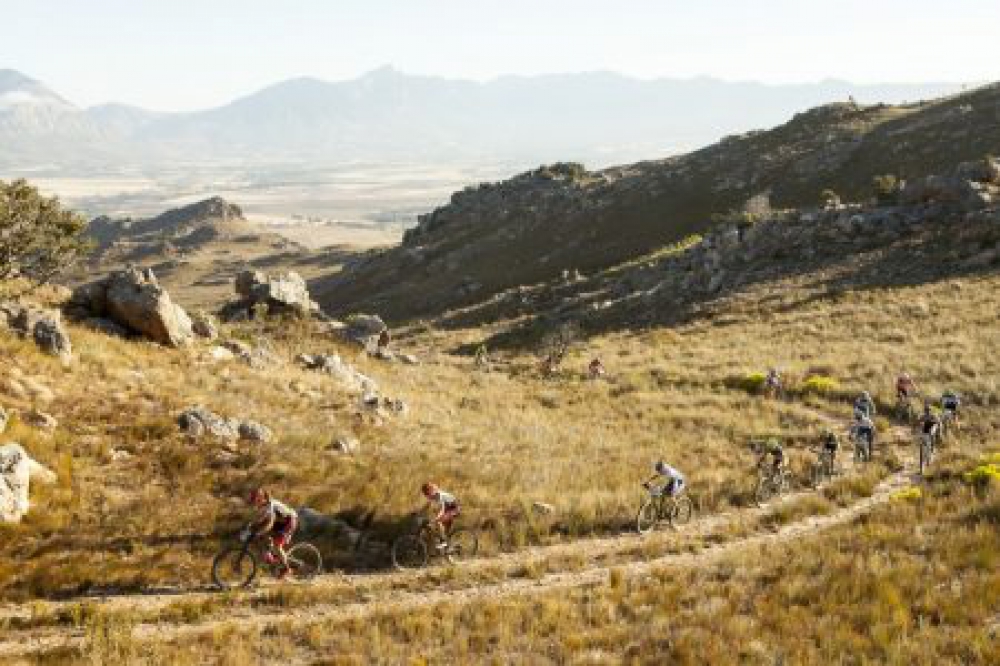 Stuart tucked in and dug deep along the dirt roads. We claimed back a few places. Cheers from people trackside kept the motivation up and the legs turning as we passed by the vast vineyards and through wine estates. Every town we passed through, the school children would be out cheering and giving us high fives. Feed 2 was done in a flash, getting fluids in at speed and picking up bottles. 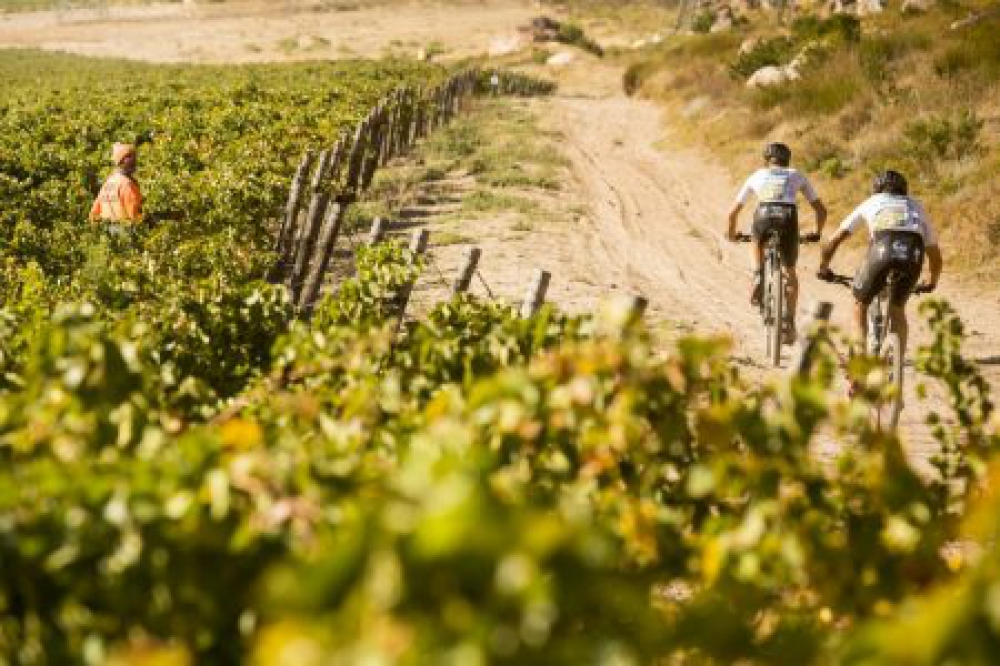 Bain's Kloof pass loomed, a gentle rise along the valley before it ramped up through the stunning gorge. TT style at the bottom, working well together, getting past riders, whilst trying to admire the view. For 10km, I pushed or pulled him up the gorge, both of us in the box. What an awesome climb though, with dramatic drops off to our left into the gorge, but with no shade from the imposing African sun. Better than riding in the wet and cold though! 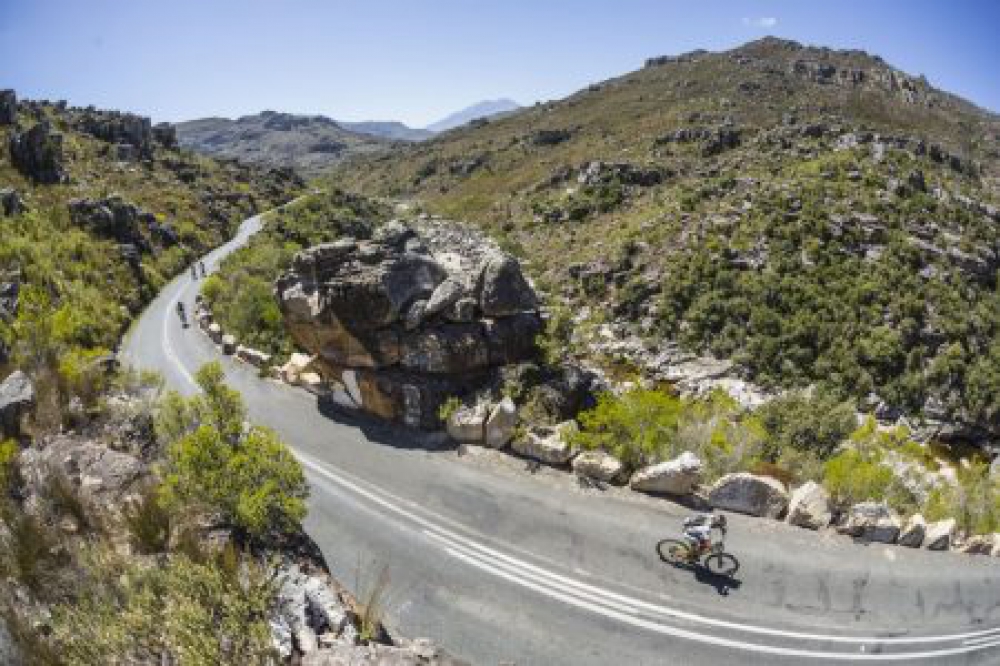 We flew up that climb. Coming over the pass, the scenery changed again, with far-reaching views across the valley beyond, but we weren't heading down there, quite yet.

Just before the turn off into the forest, we saw baboons! Just didn't look'em in the eye! A treat was in store, the single-track through the trees was epic. switch back up, then switch back trails back down with some big dips and rollers. Grin factor extreme. 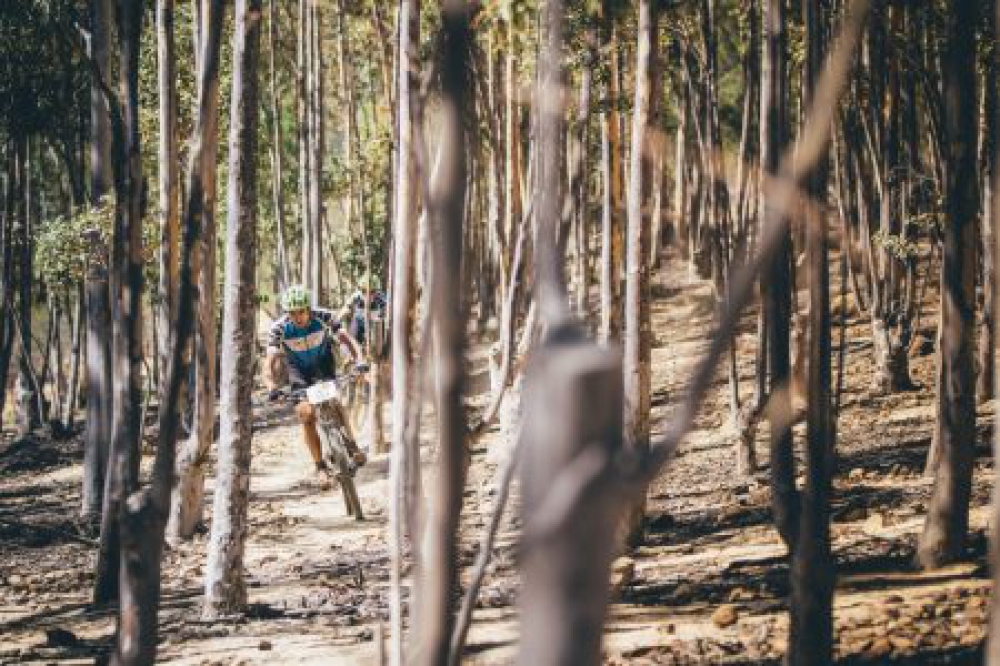 Stu wasn't grinning so much on the final peak, but using each other, we rode well up and over and into some more descending singletrack. Stu was off, a better descender than me, he railed the descent, more winding, dusty gems which just left everyone whooping by the end.

With bottles filled, food grabbed at feed 3, the last 20kms was all about speed and power, just short sharp climbs and a fast final 6kms. 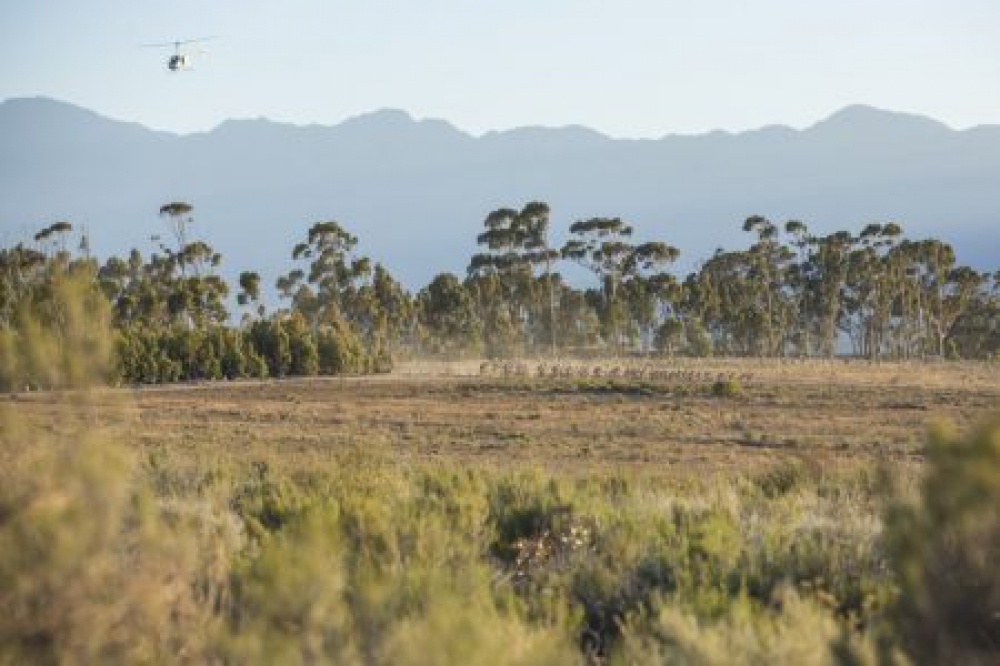 Anything can happen out there on this tough, rocky terrain, and it did today. Shoes break, bikes break, bodies break, sometimes it is just bad luck. Getting over the frustration, we hauled ass back, damage limitation.

Stage 4 is a new day. With a new freehub now installed we have a few places to claw back.