Forgotten how that 4:50 am alarm feels, but getting back in under the midday sun you realise why the start is at 7am. Stuart popped his head into my tent just to make sure that I was awake! I did ask him to, as I am notoriously bad at early mornings. The heat, which can be the achilles heel for many a rider. This was stage 1, day 2, the longest stage at 108km. 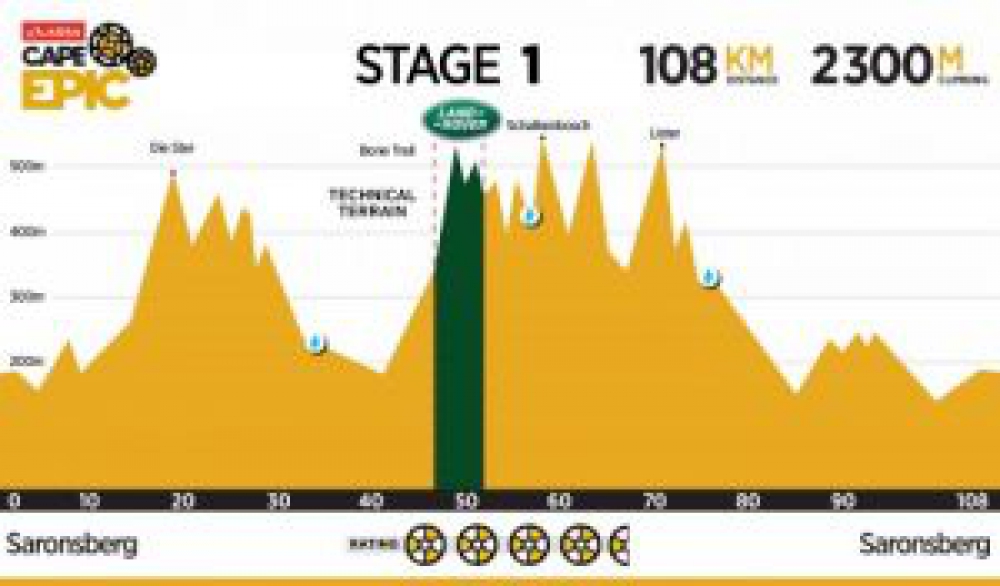 The 1st night in the tent wasn't bad at all, the supplied mattress is thick and comfortable, but then slumber comes easily after a hard day on the bike. You really don't care what you sleep on! After the high heat of the day, the chilled night time temperatures surprised a few people. I sleep cold so the Alpkit Pipedream 250 sleeping bag was spot on for comfort.

Despite feeling groggy heading for breakfast at 5 am and Stuart encouraging me along, a good breakfast went down well. We sat next to a couple of the European Novus OMX Pro bike team prepping themselves for the season ahead with this little race.

The most important part of any stage race, especially a hot, dusty one is butt cream. Never forget to apply butt cream. There is a butt clinic on site for those who do forget! With cream applied, gels and bars in pockets, bottles dropped off for pick up at feed 2 (this is a pay for option, but worth it if very particular about nutrition), and Stuart hurrying me along, we were ready. By 6:45 it was warming up a little so no stamping around on the start line to stay warm!

All friendly chat on the start line, then boom we were off. Stuart shot out like a bull heading into the arena. He was on it. My start style is the opposite, a little too cautious (and lack that xc power spurt!), I lagged behind, playing catch up. Stuart was surging in the flatter first 10km, me keeping on his wheel. It has been so dry that the amount of dust being kicked up was immense. With the sun still very low and in our faces, we were momentarily riding blind at some points. All part of racing here. 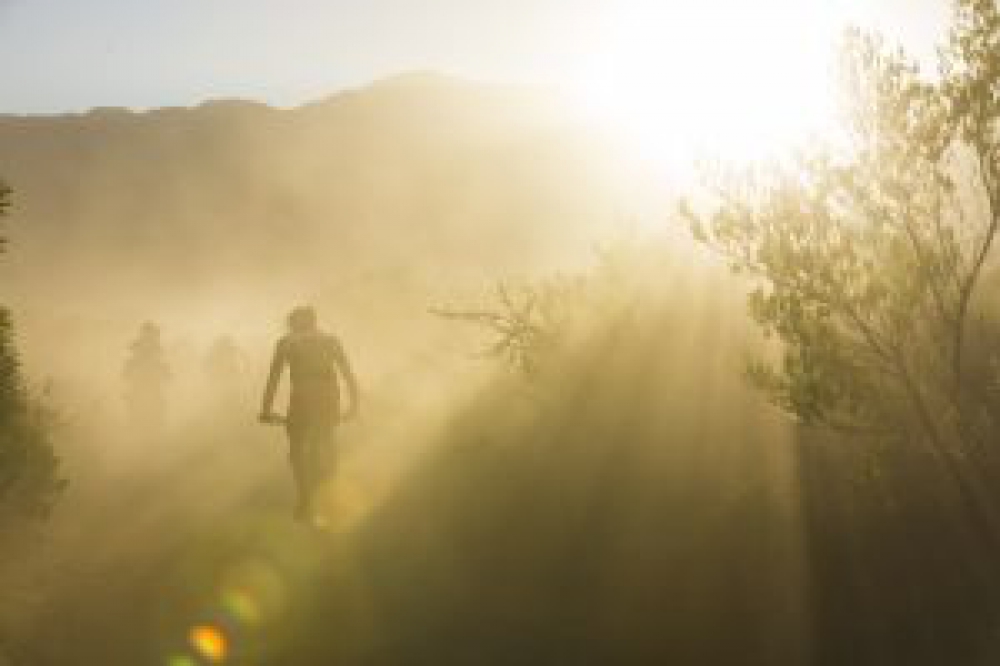 Today was about keeoping the fluids going in. By 90 minutes in, the temperature had soured. At 10km the climbing kicked in, and it would continue to ebb and flow up and around the peaks for the next 75km. Most of it was on singlatrack trails, dug out of the hillsides, switchbacking their way upwards through the bush and then back down, some iwth cool bermed corners. Bridges made out of local logs went up and over the fences of land boundries, some of them were pretty steep! 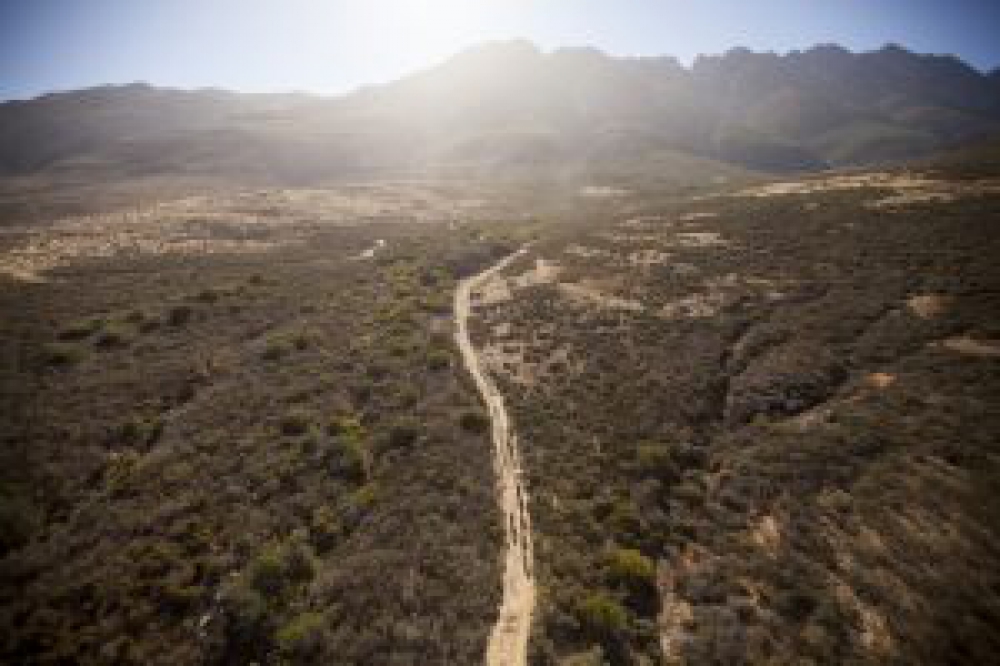 With the long ascents came the long descents, hands and arms aching by the end from working down the constant twists and turns. These trails may not have been super technical, but were super fun to ride.

The route took us through local vineyards and along their land, the flatter sections sometimes welcome to get the speed up and churn through the kms. What the last 20kms lacked in height, it made up for in sections of winding singletrack through small wooded areas, a welcome, brief respite form the sun. 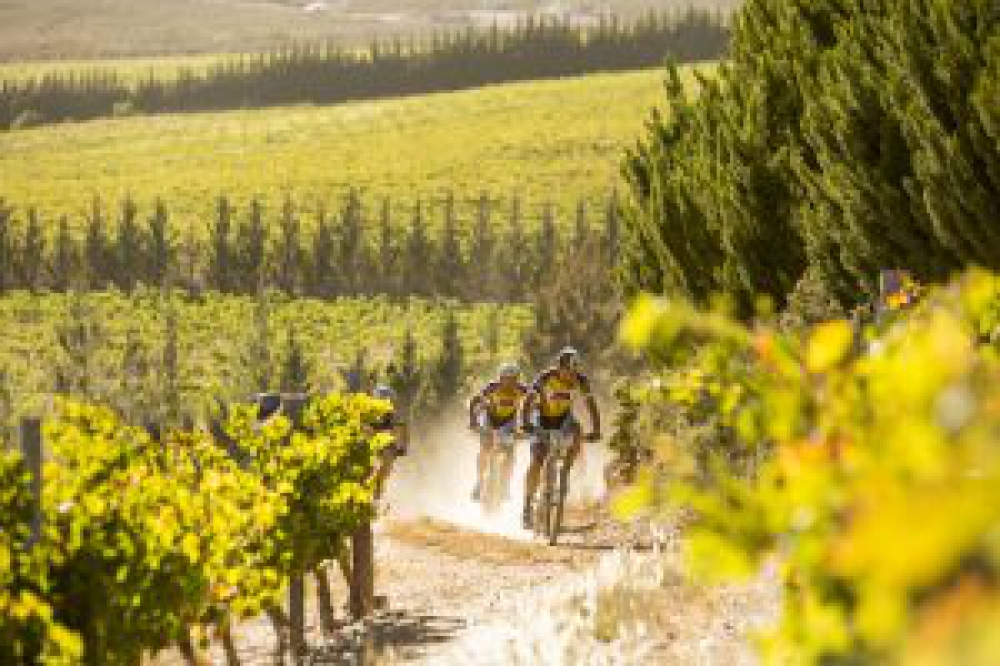 The scenery (not that we had much time to admire!) was stunning up high, with views across the open farm land and vinyards, surrounded by  mountain peaks, all set against a deep, cloudless blue sky. 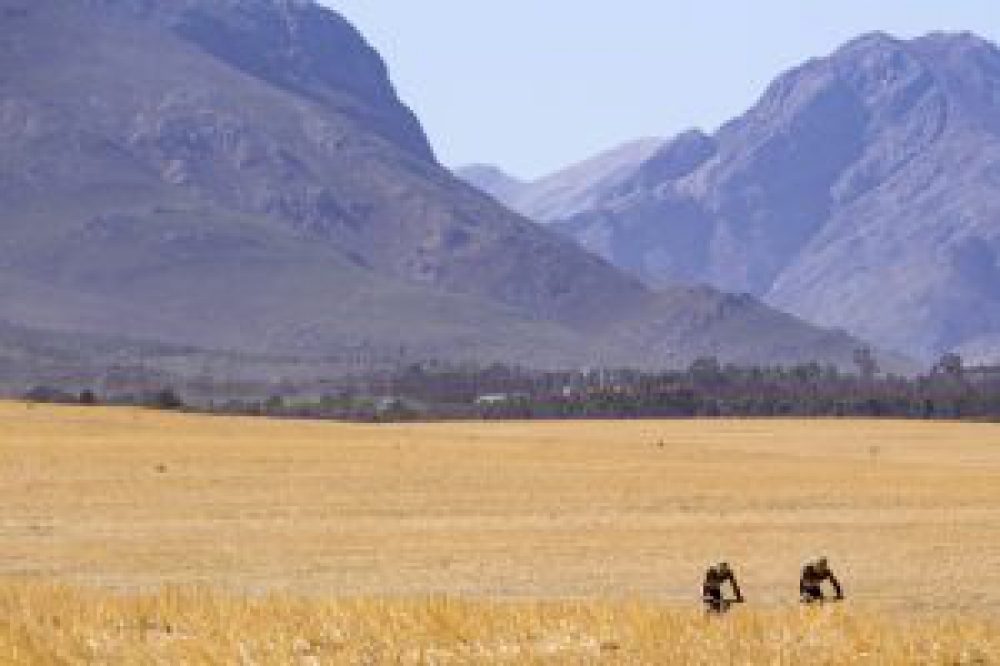 We were working well together as a team, keeping in constant contact, but Stu was having a tough time in the heat, taking its toll towards the end of the day. A Cliff Bar Mocha gel in the last 10km obviously did the trick as he picked up the pace again, firing for the finish line.

A long day in the heat, 5hours 42. Stu was cooked, literally, heading straight to the showers (a cold one) to cool off after a quick munch on some recovery food. The food and drink on offer at the end of each stage (if no intolerances) is really good, from chocolate milk to spaghetti bolognese today.

Once back in the daily routine continues: get bike washed (which they do for you and you get a text when it is done and in the bike pen), eat, drink, shower, laundry (again a laundry service to take the faff out of washing your own kit), check bike, eat again, massage/stretch (had a good one today in the massage tent).

I think that slumber will come very easily to everyone tonight and pretty soon after dinner too! Shorter day for stage 2 at 93km but only 100m less climbing. 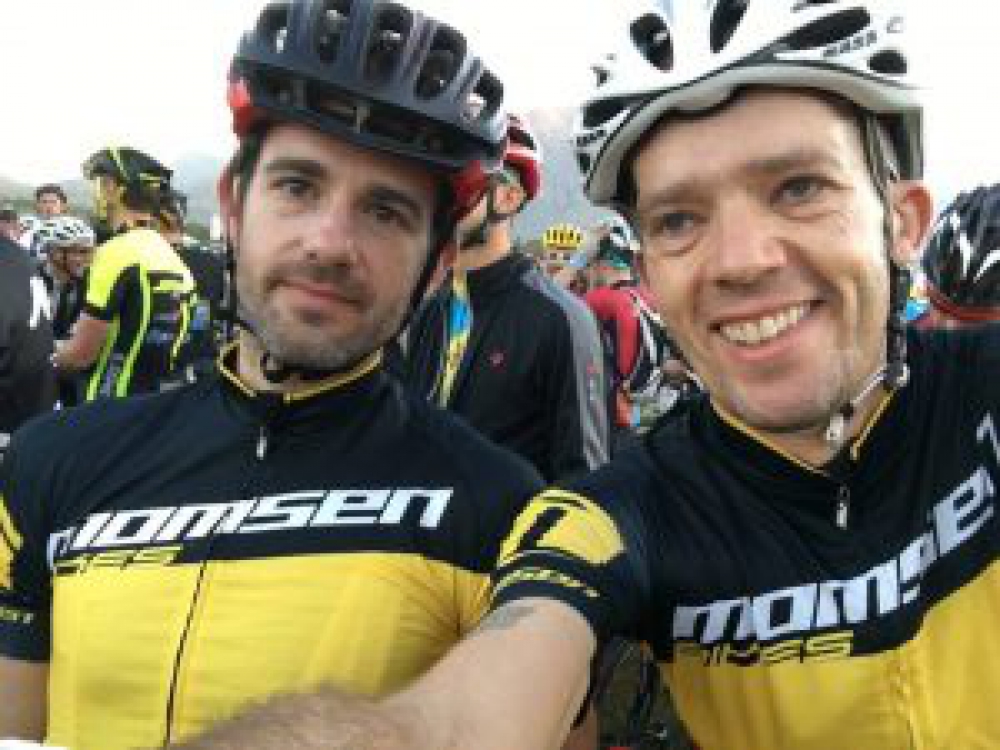 Before (yes I am not smiling, I don't do early!)[/caption] 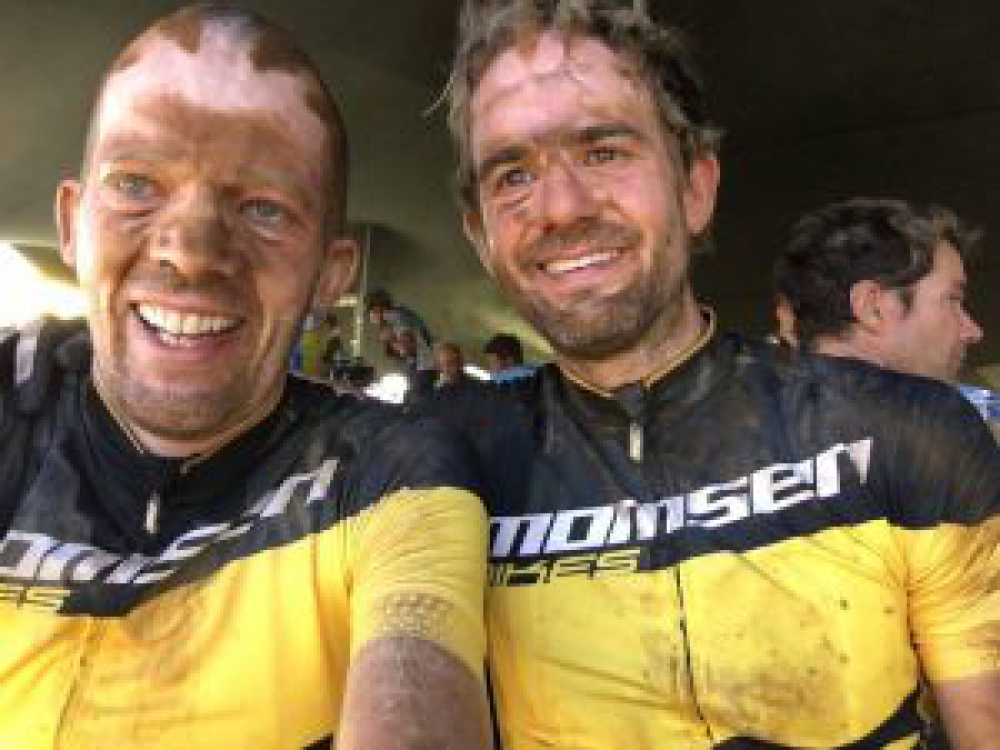 After. A tan of dust.[/caption]

Todays stage at the Absa Cape Epic was pretty uncompromising, if you speak to those in the know day they will tell you Stage 1 is typically a bit of a heart breaker.

Its an impact day, designed to wake you up and rattle you to your core, for most of us the combination of dusty trails, intense heat and a shark tooth profile was formidable to say the least, combine that with 108km and 2300m worth of elevation and you knew that this may well be too much for some.

But for some it simply proved a perfect day start to finish, Birthday boy Karl Platt and team mate Urs Huber didn’t put a foot wrong. The Bulls pairing showed their strength in these scorched surroundings but putting 1:38 secs into the Austrian Alban Lakata and Czech team mate Kristian Hynek of team Topeak Ergon Racing. If Platt can keep this going he could well equal the record of 5 Cape Epic overall wins, a monumental feat!

Team Dolomiti Superbike showed their climbing credentials on this spikey profile, 1min 2 secs off 2nd, very impressive and gives a sense of how hot the racing has been in the top 5. Keep an eye on these boys, they’re nipping at the heals of Topeak Ergon and definitely giving Centurion Vaude pairing of Daniel Geismayr and Hermann Pernsteiner in 4th a lot to think about.

No less fiery was the womens competition, team Ascendis Health pairing of Robyn De Groot and Jennie Stenerhag held onto a slender 40 second advantage over the favourites, the Spur Specialized pairing of Ariane Kleinhans and Annika Langvad. When one considers the stage took a full 5:22:18 to complete 40 seconds is a mere blink! Sally Bingham and Adel Morath of team Topeak Ergon Racing have some work to do but an undeniably strong ride 5 minutes further back.

The top three teams are extremely experienced but keep an eye out for team Sport for Good, they may well turn the tables and show what can happen when you have a previous World Champion and multiple Olympic medal winner on your roster in the form of Sabine Spitz, the German has tons of experience and is looking suitably comfortable with the marathon format.

Its another tough day tomorrow, 93km with 2200m climbing, less spikey but definitely no less challenging! Keep up with all the action and live track for your favourite riders at http://www.cape-epic.com/livetracking