I (Endurance Ed) had the pleasure of meeting Lloyd out at the Alpentour Trophy. Nothing unusual about that apart from the large, healing split in his right knee. A bike accident just 4 weeks previous split open his knee, receiving numerous internal and external stitches, but here he was, determined to race this tough event. And he did. Awesome.

This was supposed to be my goal for the year but a crash at the Dalby National and quite a horrendous injury 4 weeks before meant that I was not going to compete I was just along for the ride, as best I could, with only one good leg. 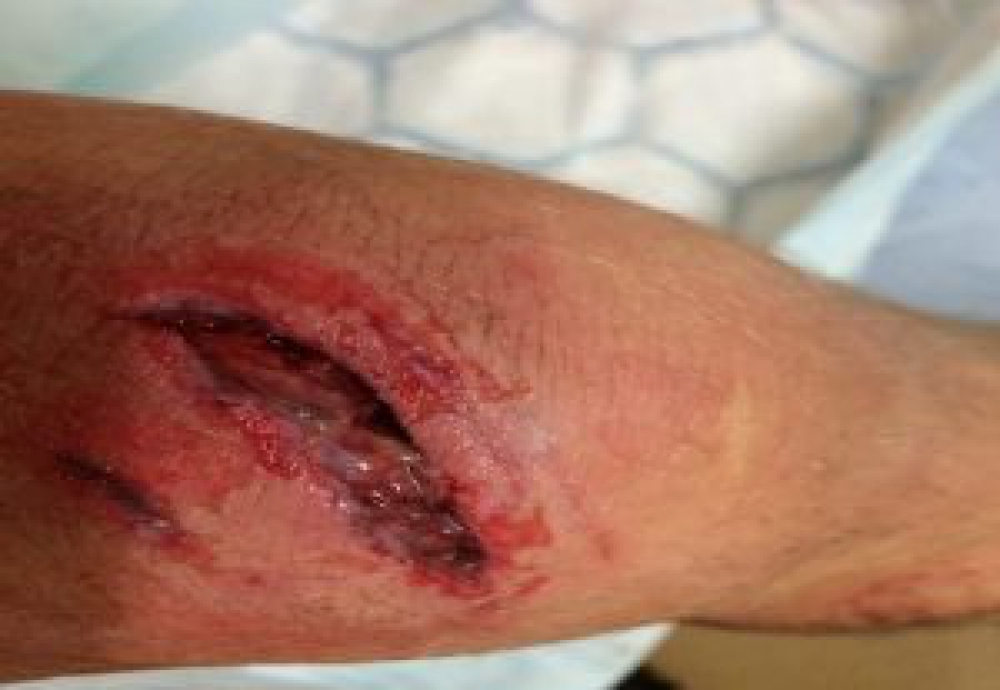 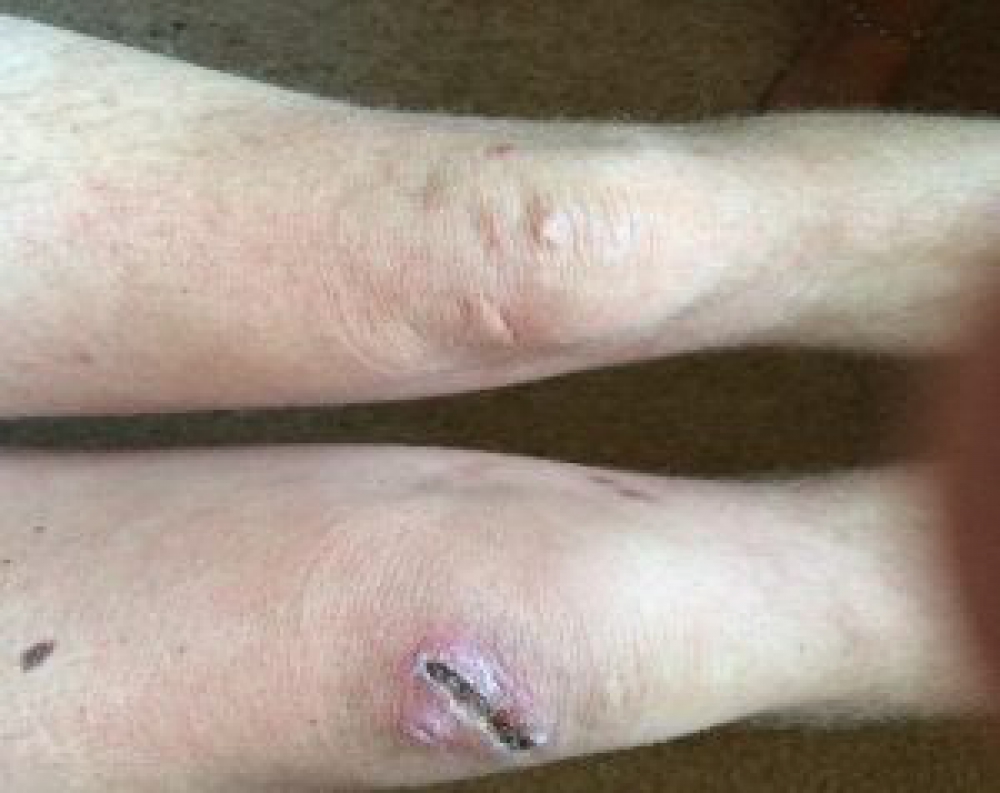 We registered the day before the race started in the Town center of Schladming, a vibrant Ski resort now turned into Summer mode with Cyclists replacing the skiers and for the next few days it was lycra clad XC racers who were taking over instead of the full face DH guys who are usually taking advantage of the areas vast amount of lifts, trails, pro down hill course and bike park. The race itself is a Pro / Am event so you do get to test yourself against some of best guys in the world, which was no more evident than when myself and Chris Taylor from Wolverhampton Wheelers, who had made the journey with me, ran into Alban (World XCM Champ) Lakarta who was there doing the race as final preparation to Defending his tile next month in France. Cue Selfie!! 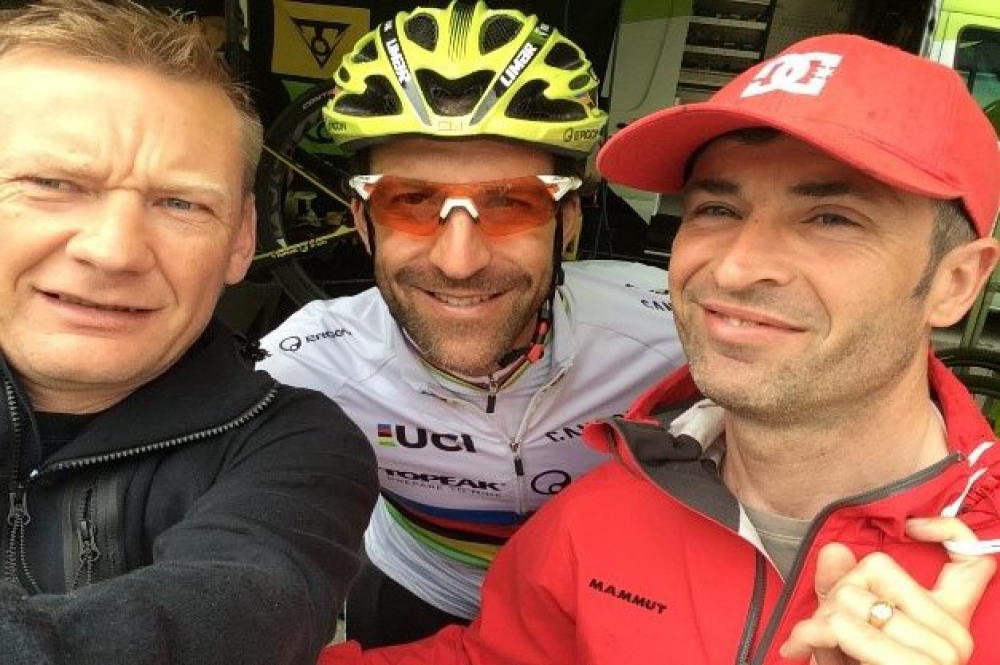 It Rained all day and we got wet... but it was great fun! 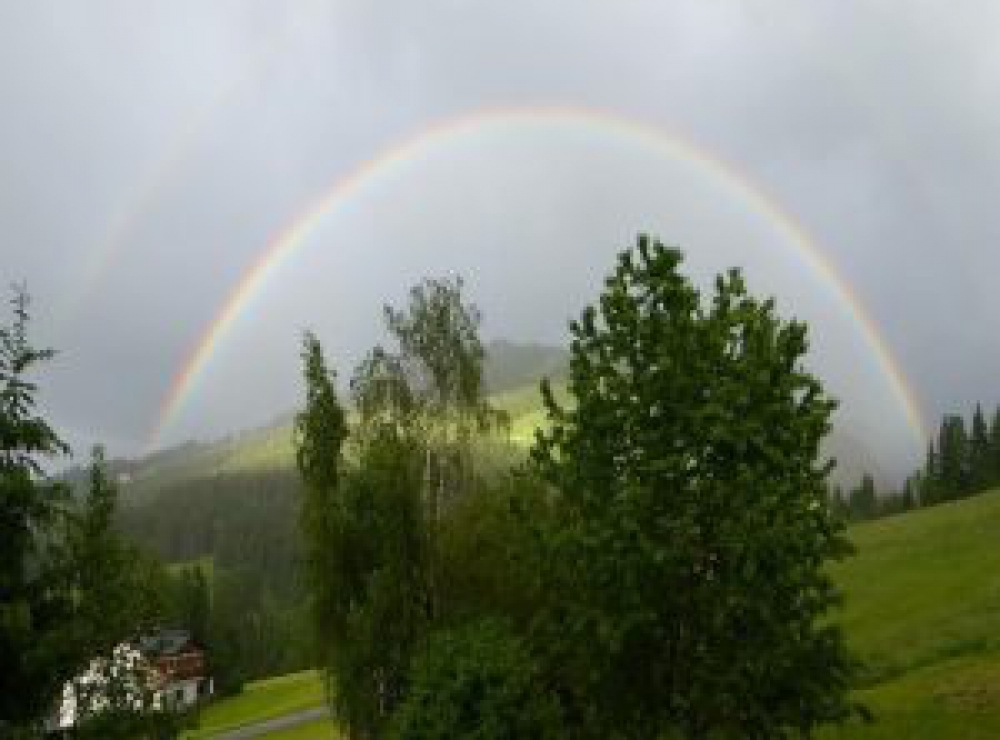 We only had 54km to do, which is a doddle, but there was also 2400m of climbing crammed into it and most of it was on the long final climb. The trails were wet and Slippy but both myself and Chris seemed to be handling them quite easily, compared to our European counterparts who seemed to get off and walk as soon as they see a wet twig in their path. Chris smashed up the opening climbs leaving me at more sedate pace nursing my leg, having to unclip and use mostly just my good left leg, it was pretty uncomfortable and I was creeping slowly backwards through the field only for me to regain my position on the downhill sections where Johnny foreigner looked like they had never ridden on two wheels in their life, walking down Fire roads; yes they were steep and yes they were wet but 'Come on!' Anyway, the final long climb loomed and I was starting to hurt but whatever goes up …up …..up and then up again must come down so I had something to look forward to, it was just getting there. I could use my right leg for about ten pedal strokes before having to unclip and rest the leg, balancing my heel on top of the pedal so I was at least getting a bit of help from it every now and again, I could then re clip and use it again. This went on and on and on, my left leg was getting in it's own state of abuse but on we went in my own little world of grovelling. Finally the top, a rest and descent to the finish only to find it was the final part of the DH course called Flow line, now it was arms and hands and brakes taking a battering but it was worth it, all of it. The descent was brilliant with high sweeping berms, roots, jumps, drops, the lot for about 6km to the finish and a very big cheesy grin. The only problem came when I tried to walk, my leg had taken a hammering and was shouting loudly 'stop right now'. I was a mess, soaked through and only able to pedal one legged, at least it was downhill to the apartment where I climbed gingerly into the shower fully clothed - helmet and all.  Cheeky Beer and bed! 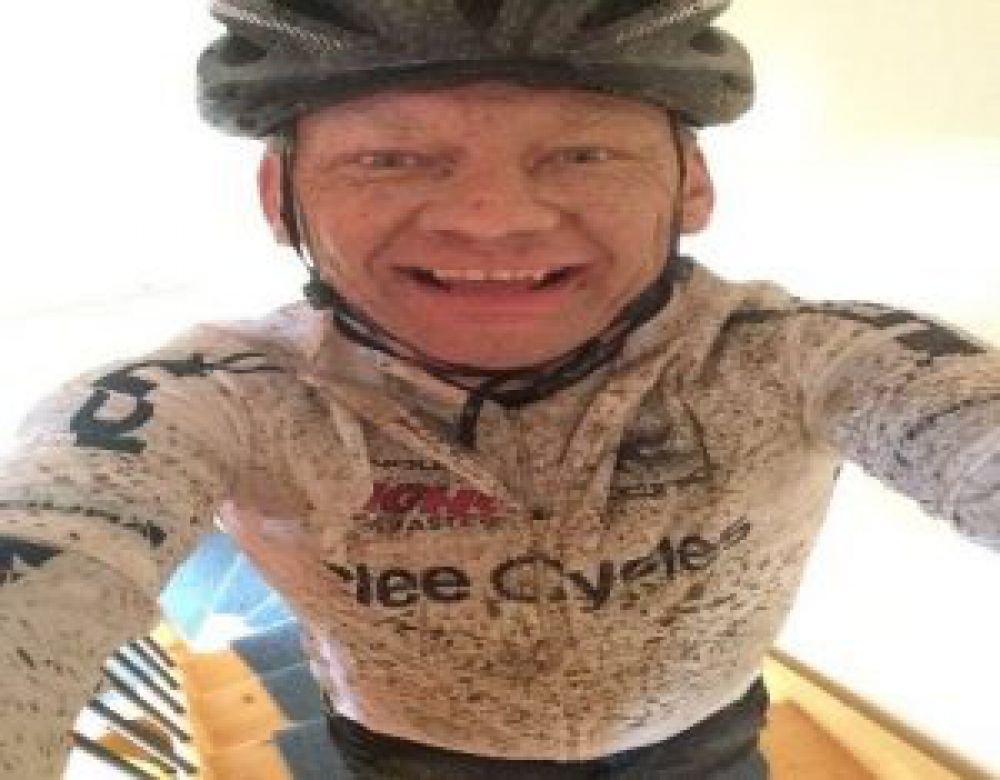 The sun shone and we got burnt... but it was great fun!

So today walking was a problem especially up hill so the only option was to ride which was still the same as before and although we only had a few more km today (58 in total) it was the two massive ascents and 2900m of climbing which was worrying. Did I say the sun was shining… maybe because if it wasn’t I would have climbed off after 5 minutes. I was suffering and riding very, very slowwwwly. But the Sun was Shining! The Day went much the same as yesterday; I would creep up the very steep climbs in my one-legged wonderland of pain only to be rewarded by gaining time on the downhills by shooting past my driving Miss Daisy EU counterparts like they were in slow motion. Repeat for next climb. After a couple of hours my leg actually seemed to be getting use to the pain and I was able to use it more often. By the time we broke through the trees on the top of the final climb and into bright Sunshine I was ready to tackle 'Flow line' again to the finish - this time I knew it better and was able to put together a faster pace on the now dry trails ... Cue Big Cheesy grin, again! Chris had again been chewing up the climbs and descents for a cracking ride but was now starting to feel the pace and was looking a little tired and red from the sun. Cheeky Beer and Bed!

Queen stage - 67km and 3100m of climbing - and I was actually looking forward to this day; it was more spread out and the climbing was to be done over 3 mountains with lots of downhill. My leg on the bike was actually starting to feel stronger after an hour or so but I was having massive problems walking, especially up hill, and I had no choice but to ride which was slower than walking on some of the really steep sections, Chris was with me for most of the ride today and was now really feeling his efforts of the last 2 days. The climbs got steeper and I had no option but to ride, people were looking at me as if I were mad but there was no choice, slow slow grind up and super fast down I actually felt I was racing. On the biggest climb of the day we hit the snow line this time riding was not an option I had to walk, sit on my arse, crawl, slide, hop and skoot anyway possible to get to the top. The descent down was the most technical of the race, all natural terrain big roots, steep drops, big rocks. Luckily I was able to let my Epic do it's job and smash the trails, I was buzzing for the last little kicker to the finish and then again hit 'Flow line' to the bottom; even faster and an even bigger cheesy Grin. Cheeky Beer and Bed! 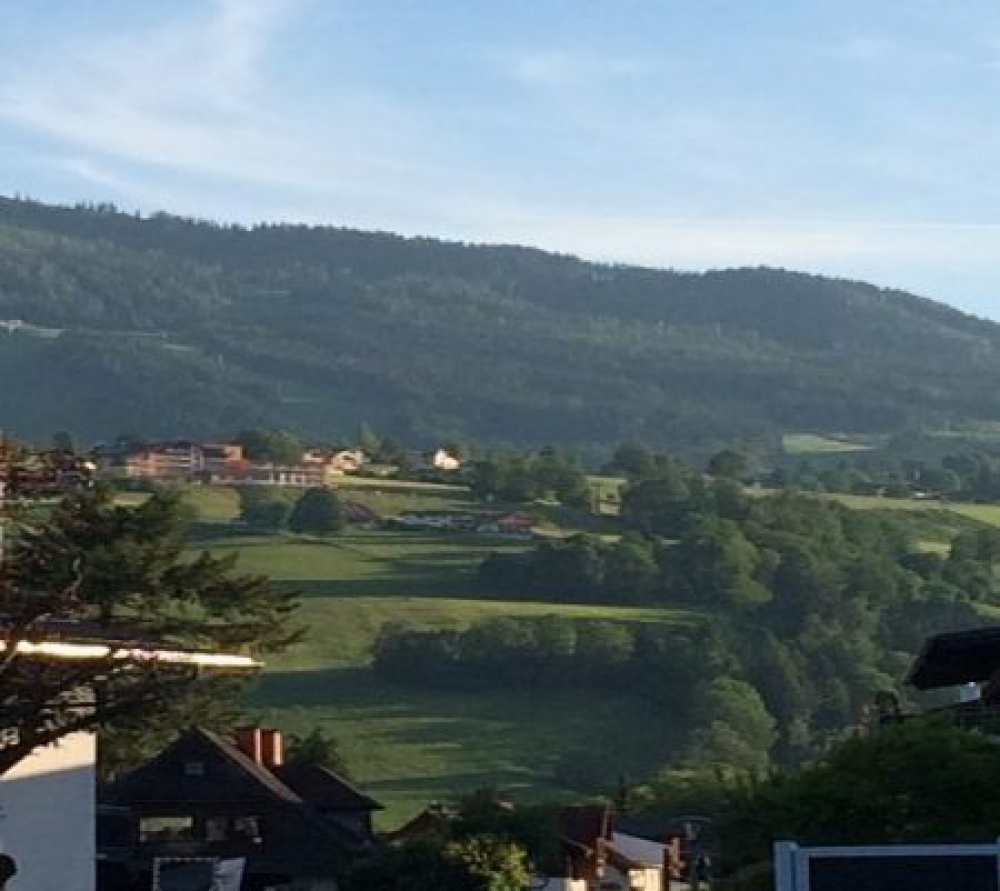 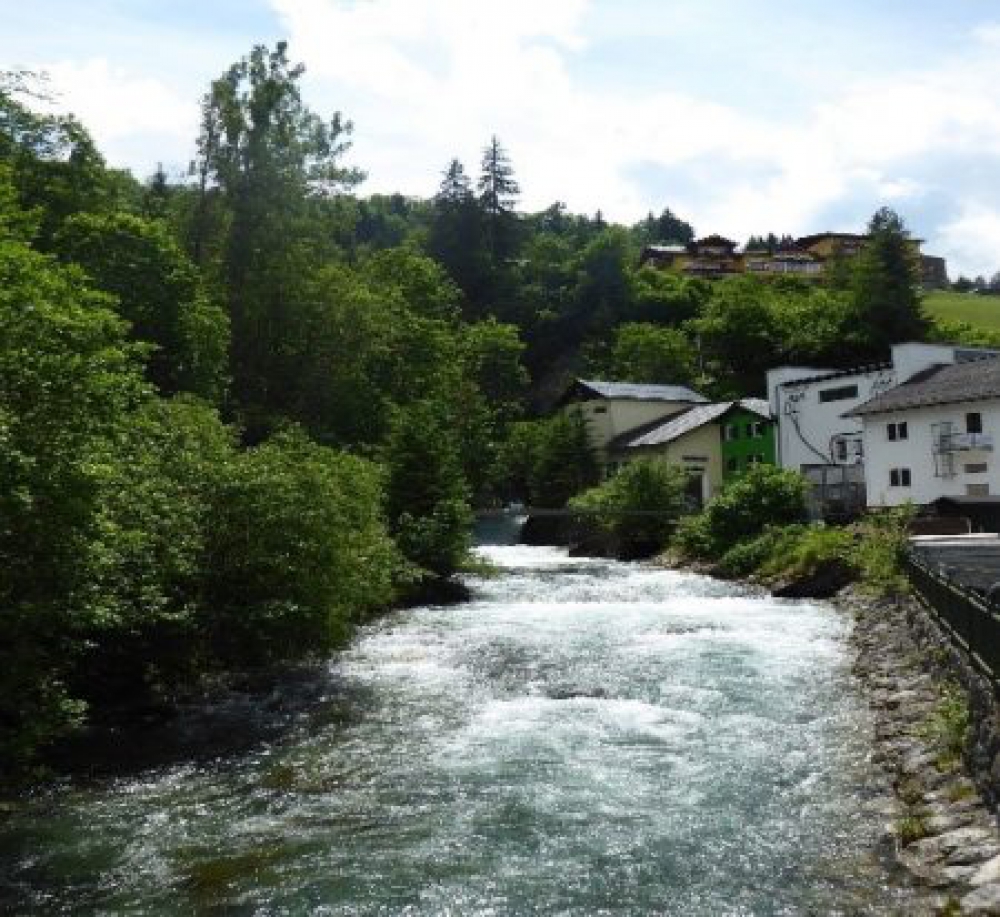 Cloudy with a chance of meat balls. HELL day!!

I awoke totally smashed. My knee was swollen, I could hardly walk... I didn’t need this day at all.  We only had 14 km to do all uphill 1300m of climbing and it was a time trial so nothing at all to look forward to. As we got to the start my leg was numb even trying to warm up was pointless, I couldn’t get out of the saddle as the pain was too much. Shit or bust just get to the top and its all over... this is the final stage - only I wasn’t actually sure I could get to the top! I was off first with Chris about 6 mins behind me, he shouted some encouragement with 'see you at the top' but I knew he would be seeing me long before that. It all went by in a bit of a blur all I could do was concentrate on keeping the pain to a minimum. I was being passed all the time but I didn’t care I just wanted it to finish, but it didn’t, it just kept going up and getting steeper and steeper. I had no choice on some sections but to walk, limp, hop and push the bike, I was going so slowly spectators and hikers cruised passed leaving me struggling behind, I can't remember how many times I wanted to stop but it's not in me to quit so on I went. I finished in 1 hour 35 mins nearly an hour behind the winner over 14 km I was trashed. Chris, after passing me about 20 mins into the climb, had a much better day finishing in the top 30 - Chapeux. 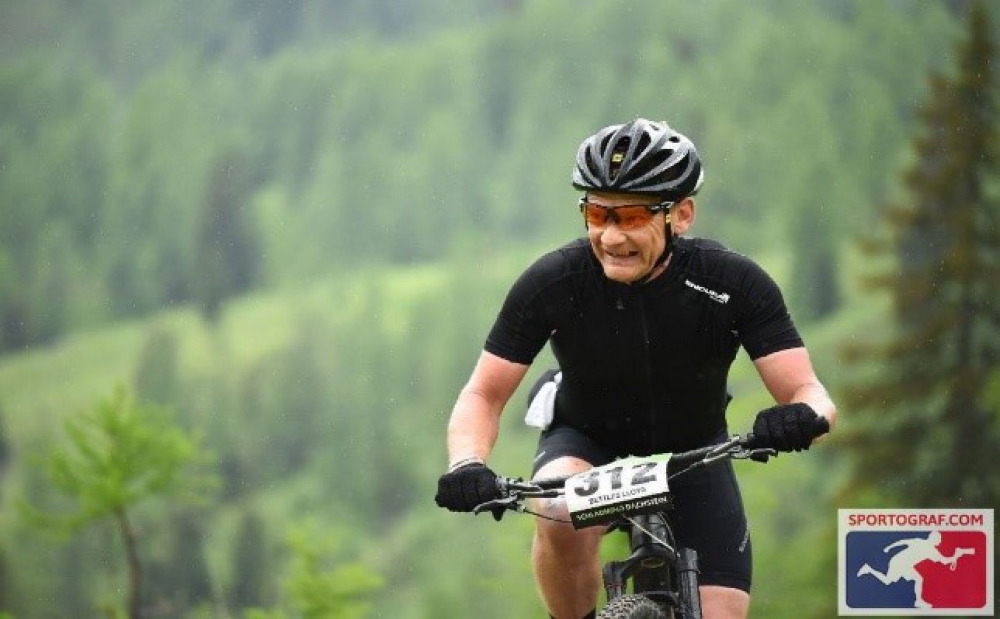 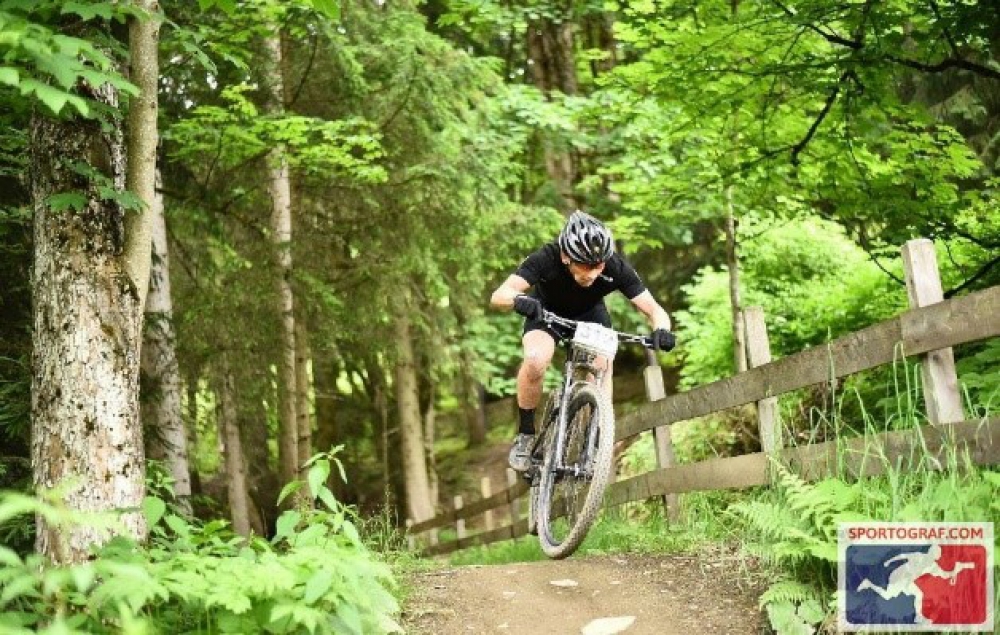 And the fun coming Down[/caption]

It may read that this was not enjoyable but it was exactly the opposite, the normal buzz I get from having a great race, being fast, being strong was replaced by a sense of achievement by just finishing everyday. I had time to take in the views, ok through gritted teeth, but none the less Austria was spectacular!!

The Race was brilliant, a test for everyone there, the organisation was top notch with first class food at the presentations every night and all in the entry fee. The locals couldn’t do enough for you and welcomed the racers wholeheartedly. All in all I wouldn’t hesitate to go back but hopefully with a much better level of fitness so I can have a good crack at actually racing. Talking of racing, while out there we met up with Scott (gaffer tape) Cornish who absolutely smashed all but one finishing 2nd place overall despite racing on a bike that was literally falling apart every day and being held together by vast amounts of tape, well done mate a decent bike might have got you that top step... oh and by the way don’t get me started on bloody Garmin 1000’s!