Those of us hoping for a totally dry event similar to the last two years where the course was bordering on dusty and very fast were let down rather abruptly by the traditional British Summer weather as it proceeded to rain rather heavily in the run up to the event, but at least everyone was in the same boat.

My pit buddy and fellow solo rider Dave Whittaker arrived nice and early on the Friday morning, so early in fact that when he got there hardly anyone else had arrived and when he called me to let me know that the pit was set up I was still wandering round at home, sorting the kids out and finishing off packing the car up! He managed to secure a rather excellent track side spot on the straight up from the final climb and set up our area. 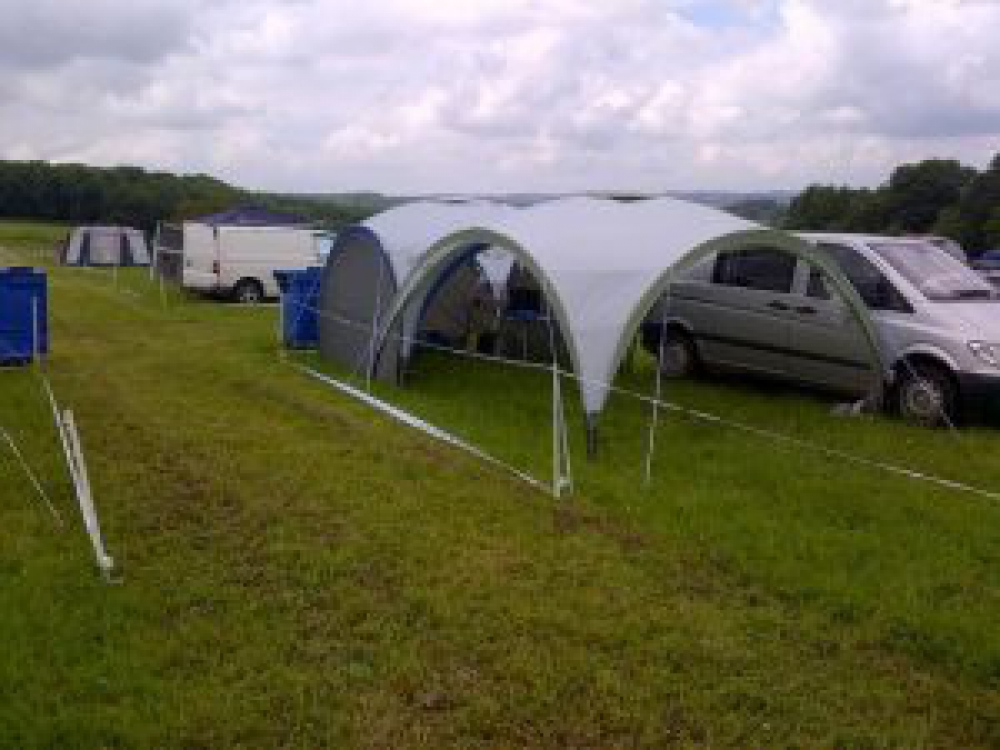 The course laid out in the rather picturesque landscape of HRH Princess Anne’s Gatcombe Park Estate in Gloucestershire had changed a little from the previous years with an extra techy descent added in to keep you on your toes, which unfortunately claimed two victims during the race, but thankfully their injuries were not too serious despite a trip to A&E. When you consider that there were “only” two ambulance cases all weekend with 1000 riders bombing round a course for 24 hours it plays testament to the thoughtful course design.

The course itself is a good mixture of flowing single track, fast descents, steady climbs with a  couple of really tough ones thrown in for good measure, coming in at just under 12km and 330m of climbing per lap.

Sitting in the pit area and watching the riders who’d decided to have a sighting lap or two on the Friday afternoon coming back rather muddy we made the decision not to go out as a, we didn’t see the point getting the bikes and kit filthy and b, why expend the much valued energy when we’d need as much as we could muster for the next 24 hours.

After a mammoth evening meal of pasta and chicken and a good night’s sleep I rolled out of my tent at 8am, and started to get ready. The number board was attached to the front of my KTM Scarp 29’er FS, last minute checks were made and food, energy drink (Nutrixxion UK gear) and spare biking kit were laid out in the pit area. 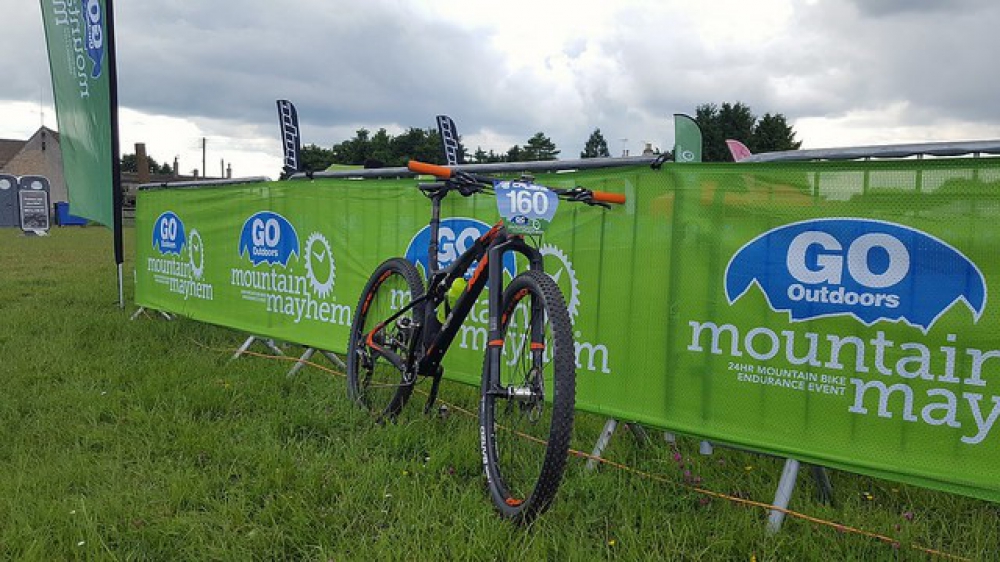 The race starts in a Le Mans style with a 1km run / trot round part of the course, those riding in teams tend to leg it off the line in an eager battle to gain a vital couple of seconds over their competitors, the soloists (well me especially) on the other hand take a more leisurely approach and a more gentle jog round through to the start finish straight to collect my bike.

The first lap as ever proved hectic with up to 600 riders on the course all vying for position, so the inevitable hold ups on the single track sections with more than a fair share of people tip-toeing through down the tricky descent with the odd one falling off and rolling down the bank a bit.

My tactics were to roll around each lap at my own pace, trying not to get into individual battles with other riders as it’s pretty hard to tell who is a soloist and who is on a team (other than the different numbers on the boards, but that becomes a bit fuzzy after a few hours in the saddle), with a pit stop at the end of each lap for a bottle change, bite to eat and if required to swap a used gel wrapper for a new one. I’d set an initial target of completing at least 20 laps with a view to breaking into the top 20, as my previous attempt a MM solo saw me ride 17 laps and come home 41st with 21 laps being enough to break into the top 20. So as long as I was averaging around an hour a lap and eating well it should all go to plan. 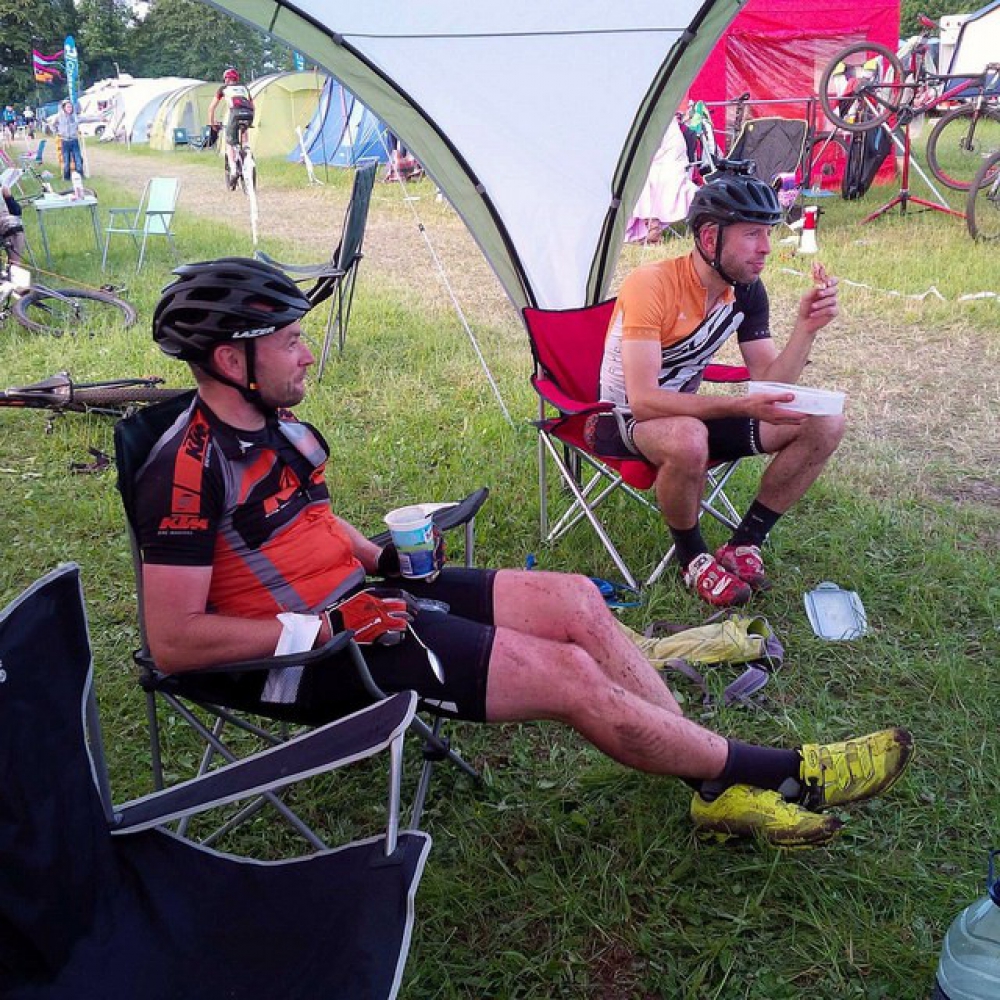 That’s me on the left with the rather bright shoes, fellow solo’ist Dave Whittaker on the right.[/caption]

One thing that became apparent was that due to the weather leading up to the event the course was considerably muddier than previous years and the ensuing lap times would be slower, thus making it harder to maintain the required average. The course itself started off slightly slick and as it dried out over the first few hours the mud became more of a blu-tac consistency, constantly draggy and grippy but with that weird sound when you can hear your tyres releasing from its gip, despite this the bike wasn’t actually collecting too much mud and I was staying pretty clean. So targets were adjusted slightly and a general thought of 16 laps would be enough to hit my Top 20 target.

As darkness approached it was time to fit my Exposure Lights Maxx-D to the bars, have a quick change of kit as it was rather sweaty by this point and it was going a  bit colder, so a long sleeve base layer was donned and out I headed into the setting sun. There was the unexpected bonus of a full moon on the night, so the open sections were pretty bright for night time, but the distinct lack of cloud cover made it feel pretty cool under the night sky. My night time laps slowed a little, down to general fatigue and riding in the dark, but I was still on target so all was good at this point.

I ploughed on through the night on what at times seemed like an almost empty course, I do wonder where all the riders go sometimes, making sure I ate enough and kept well hydrated and as the sun rose through the trees its warmth could be felt and a lift in mood was evident. When it got to 6:30am I was starting to feel really tired and a longer pit stop was required, my / our pit crew (Dave’s wife Paivi) checked the position on the live trackers and it turned out I had rode my way into 9th position, 20 minutes ahead of the guy in 10th, to be honest it was a bit of a shock. So a change of kit, some proper food (sausage rolls and rice pudding, with a nice helping of flat coke) and off I went again. 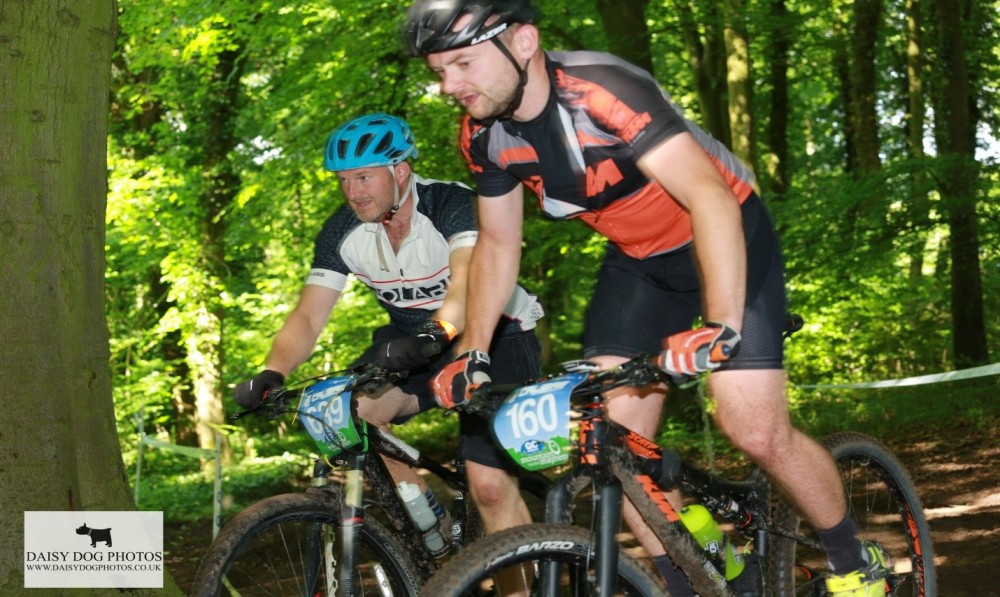 The course was now about as dry as it was ever going to get, with the blu-tac feeling changing to Velcro, there was the odd dry line appearing, inevitably right along a bed of nettles at the side of the track, but at this point it doesn’t really matter and you don’t notice the stings after a few minutes.

I carried on, riding consistent laps and as Paivi checked the leader board again I was still 20 minutes up on the guy in 10th , he wasn’t gaining and I wasn’t losing time, so it looked like I had top 10 nailed on. As we got closer to the finishing time at 12 o’clock on the Sunday it became apparent that I had in fact rode 19 laps, 213.5km and climber 6192m to 9th place overall in Solo Male which is my best result ever in bike racing.

The bike was absolutely faultless, never missing a beat through the course of the race and I couldn’t have done it without the help of Paivi in the pits. I’d also like to thank the guys at KTM Bikes UK and http://www.nutrixxion-energy.co.uk/ for their support.