With clear blue skies on the drive into Megeve, we got a real sense of just how tough this race was going to be, mountains rising up from the valley all around, many still with lingering snow,  the snow covered peaks of the Massif du Mont Blanc in the distance. Alan Colville and myself had come over for the MB Race, billed as the hardest single day race worldwide, packing 7000m of climbing into just 140km. A quick recce of the first few kms and we understood how. The route was mostly steep, up and down and far from the usual Euro fireroad fest. This was going to be a challenge just to finish, let alone race it. 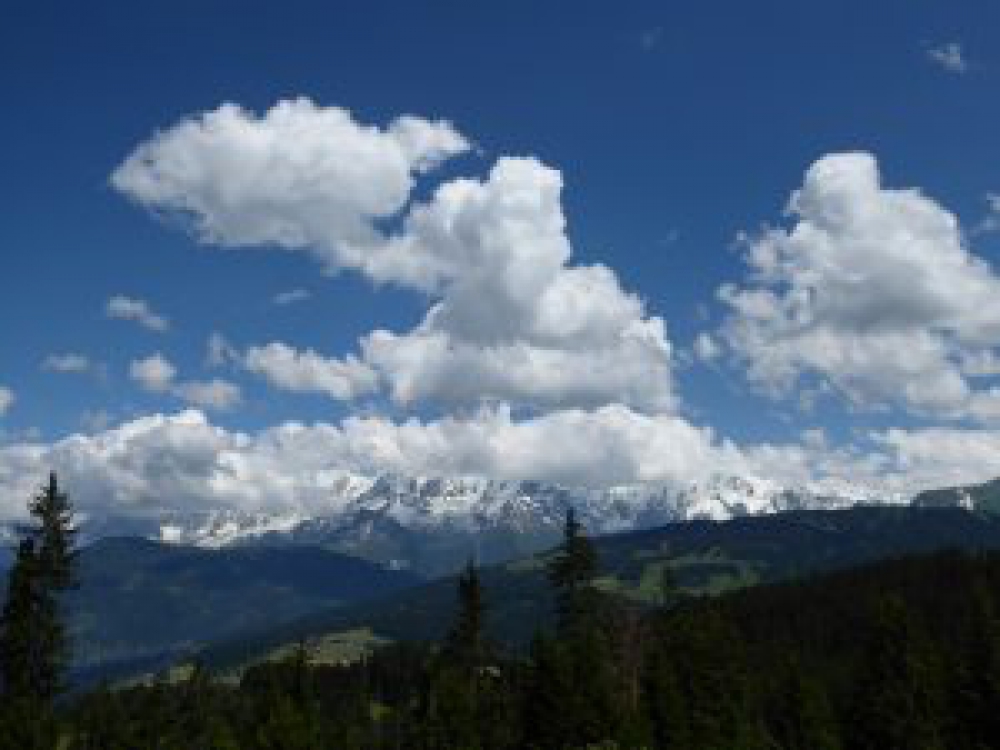 The views as we gained some height were spectacular of the surrounding peaks and the valley below, trails to ourselves save for a few cows and their huge neck bells. Taking advantage of the hot weather and no time constraints, we took in the vistas, legs getting a feel for race day. The forecast for the day of the race was in total contrast; thunderstorms, showers, cloud and some sunshine.

It was just getting light by the time we got to the start along the main street, thinking we had timed it right for a good start spot, but beaten to it by already large numbers of riders. We found a spot next to Carwyn Williams and Mark Spratt who was coming back from injury, out here to test how the knee rehab was going! With Elite riders chasing UCI points in pens up front, the rest of us lined up behind, reaching far back down the street, with around 1100 riders tackling the full 140km ultra distance 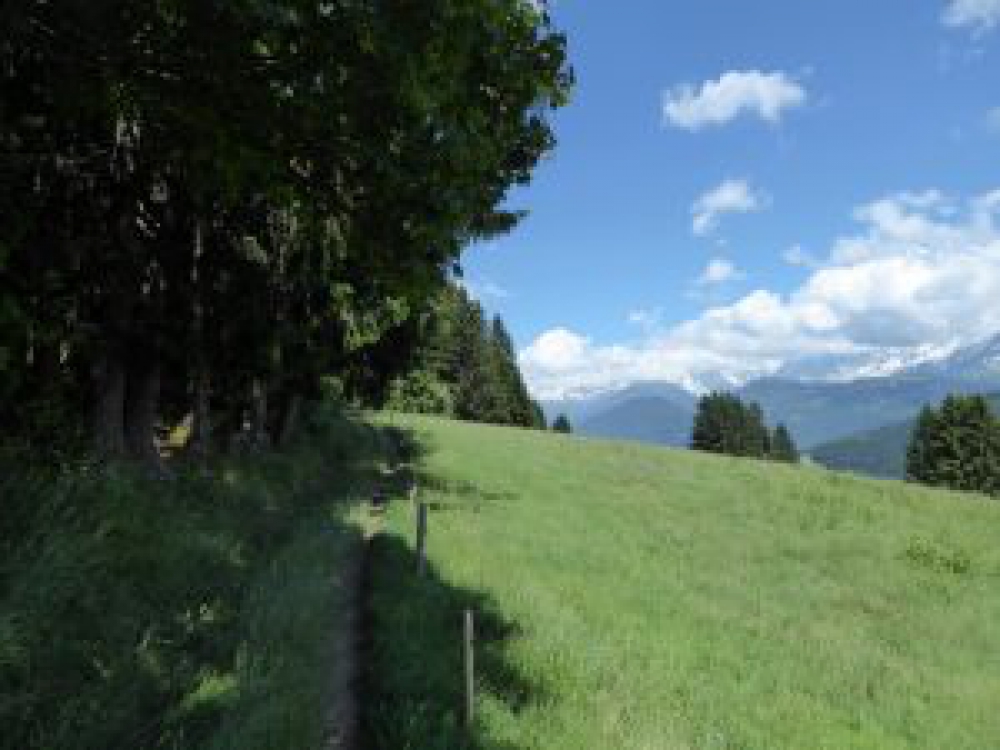 The early morning was warm and humid, perfect storm weather, but the forecast had 2 blokes standing around  in a car park discussing like rookies what to wear and what to bring. A few outfits later, I went for (an all Gorebikewear) SS baselayer, Alp-X Pro SS jersey, arm warmers, Alp-X Pro shorts and an Oxygen active shell Goretex jacket tucked in a back pocket along with my preferred nutrition from Torq. The mandatory emergency blanket was stuffed into the Topeak saddle bag, along with 2 tubes and a number of ‘just in case’ spares. A few grams extra was worth the confidence of being to keep riding, as although feed stations are numerous it’s still a long hike for the unprepared.

The start speed always gets me at these ultra events, riders pushing hard up the first climb, along tarmac, a surface we would barely see for another 132km. Getting caught up in the speed, weaving in and out of the mass of riders wasn’t an all bad thing though, moving ahead before being funnelled into singletrack. I passed a London Dynamo rider, said a cheery hello, then saw his bike, a fatbike. There had to one, how to make a tough event even tougher! He was probably laughing on the muddy descents though as riders around him fell and he just rode on. 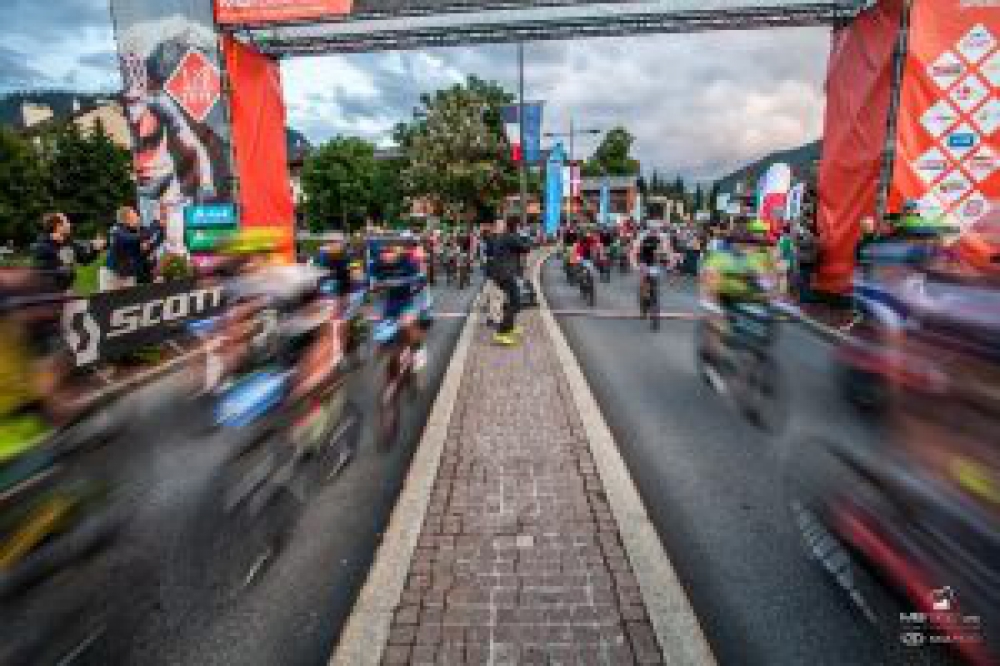 The opening climb was a mere tickle, compared to the whole. It did a job though, waking up drowsy, early morning legs. The previous day’s huge vista was obscured by impending storm clouds, coming in early. Dropping 650m down steep, loose forest trails, the feed station at 13km would be a needed refueling spot for some before the climbing started proper, up the 1st 1000m ascent, to the cloud obscured Col du Jaillet at 1723m. 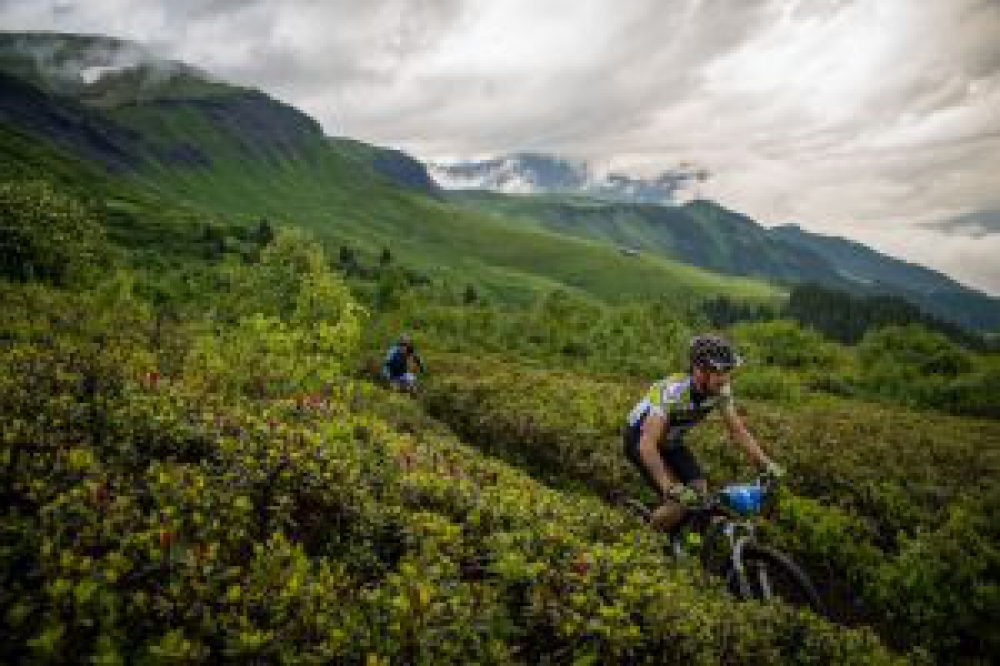 With so many trails and singletracks snaking their way up and around these mountainsides, fireroad riding is happily kept to a real minimum, the race taking in some of the best sections around here. Surrounded by dense forest, you had no real sense of where or how high you were on the climb up, until occasional gaps in the trees gave way to grand views of the valley below and mountains beyond, taking the mind, momentarily, off the constantly challenging gradient. The way up was silent save for the sounds of hard effort, and the changing of gears, the masses having thinned out to a mere few riders around me. 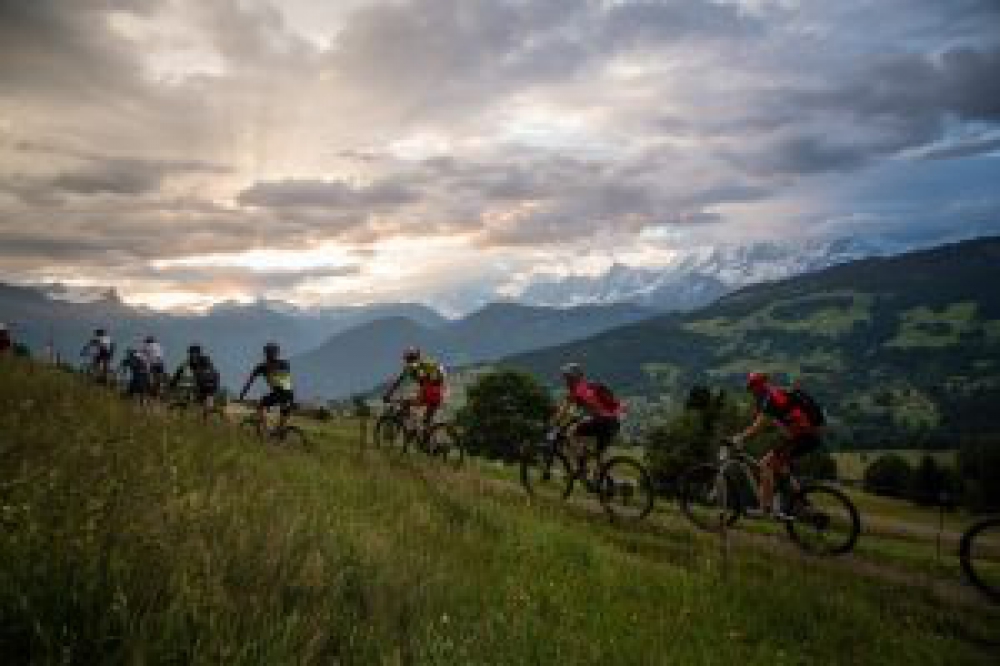 True to how rapidly mountain weather can come in, a loud thunderclap directly overhead announced its arrival, accompanied by lightning, the rain coming suddenly down hard, which tempered the high humidity at least. Soaked through in seconds, there wasn’t much point stopping to put a jacket on. The storm moved quickly on though, warming sunshine close behind. The forecast was pretty accurate so far. 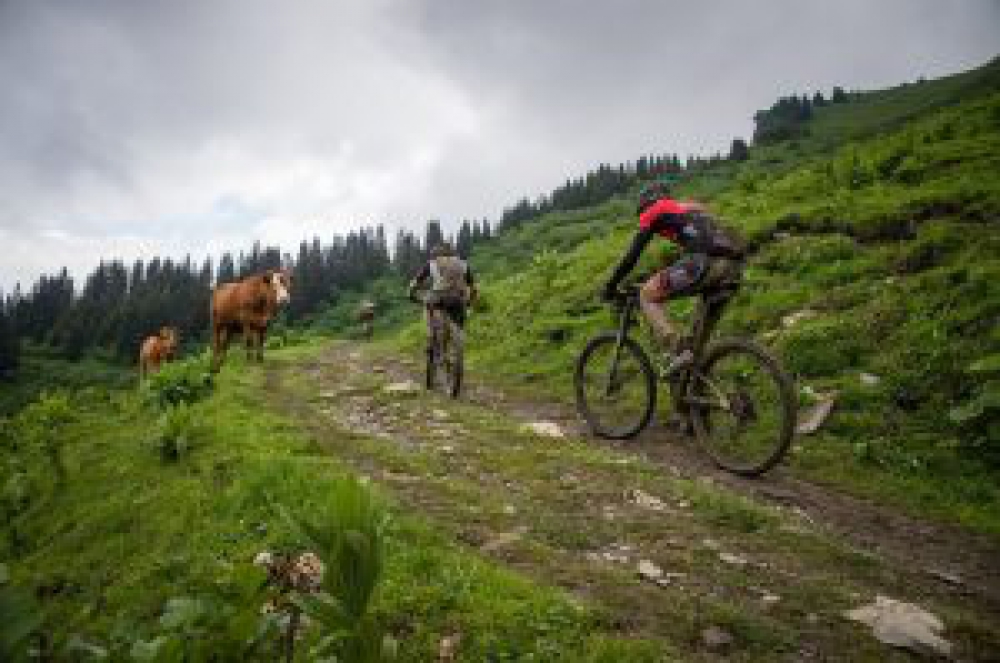 Trees became mountaintop shrub, opening up to 360 degree views and rolling ridgeline singletrack, which would have been fast had it not been for the wet weather turning dust into that typically British style sticky mud. Stream crossing had a use at least, washing the worst of it off! 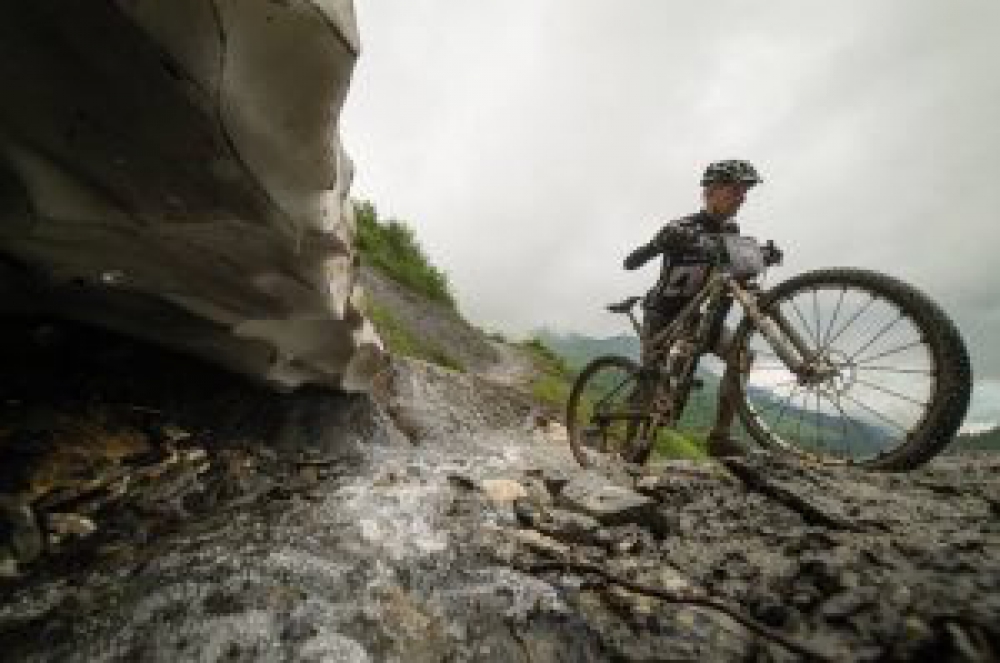 Tim Dunford and George Budd had returned this year with fully’s. Descending off the ridge I  understood why. The singletrack sections ticked all the ‘awesome ride’ boxes. Flowing down the mountainside, sometimes rocky and rooty, often technical and steep, the dry, fast lines of last year were muddy gullies this time though. Some riders took audacious lines to get ahead, quickly face planting, grip lacking outside of the single good line down. Wider forest trails offered some respite from the increasing arm pump, momentarily being able to release the brakes, but not for too long, speed increasing rapidly on the steep, winding descent..

3 feedstations in the 1st 45km kept riders fuelled and kept pockets light, depending on your feeding preferences and stomach tolerances. The lack of fireroad bashing really made this event, keeping the motivation high even in the depths of the latter kms. Rolling forest singletrack ebbed and flowed, up and down, the body working hard to keep tyres from wandering in the slippery mud. I confess, I did run down some of the more rooty sections, deep lugged shoes having more grip than race tyres!

At 46km, the legs tuned into another 1000m climb, to the higher reaches of the Mont de Vorés at 2050m, Less steep, but longer and more winding, along more choice forest trails and singletrack. Riding in a group, following George Budd’s wheel, I, along with everyone else made the assumption that we were en route, but stopped at a shout from far below ‘c’est pas la bonne route!’. Rookie mistake, we had passed a sign on a tree, pointing tight right off the trail onto singletrack.10 minutes lost.

Beyond the feed station at the refuge du petit tretaz ¾ of the way up, forest gave way to open views of the expansive ski areas and surrounding mountain ranges. The route rewarded every climbing effort, with plenty of, ‘here you go, enjoy the view and this gem of a trail’, dropping you down yet another long section of choice singletrack. The weather on the other hand wasn’t so rewarding!

Tim and George gave me a masterclass in descending, disappearing off down the long, winding  descent to Megeve and the 70km marker. It felt like the finish, passing through the start area and past cheering crowds. There was that short lived temptation to slacken off early and head back for a cold beer and enjoy the views from the apartment balcony!

At the Megeve feed station, you get a 100km sticker put on the number board and and a hearty ‘courage’ as you head back off into the hills. The ride up and out was a little reminder for the legs, steep, rocky and slippery, cursing myself for letting the back slide out, resulting in a hike a bike and a little talking to, that you knew that this was going to be tough. 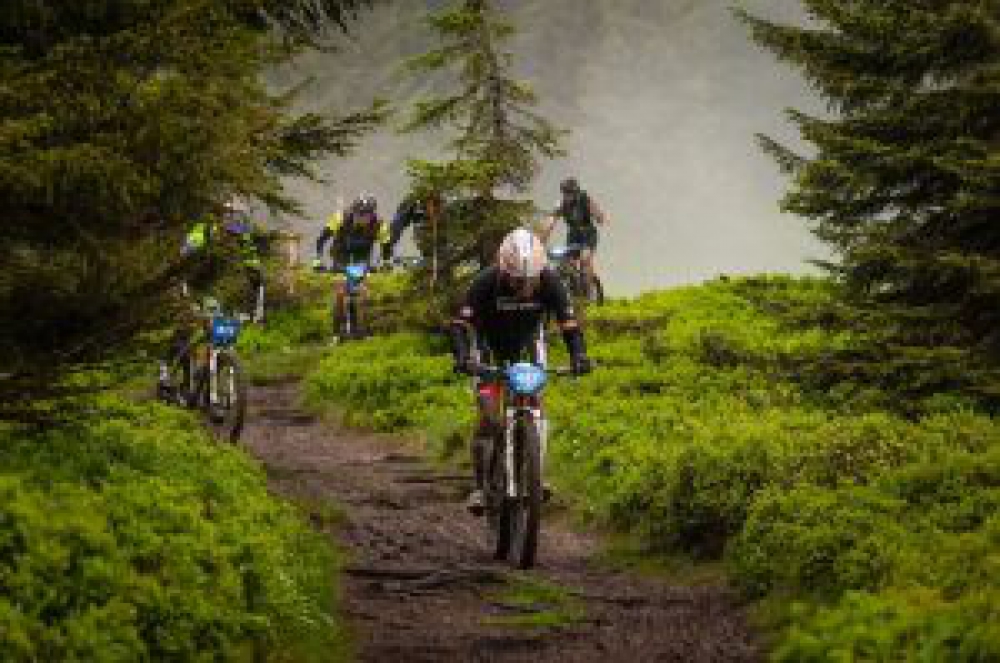 15km of undulating climbing to reach the heights of Mont Joux at just under 2000m, the weather ever changing: sweating under sunny intervals to chilly and damp as we headed up into low, thick mountain cloud, and patchy visibility. Trails became mountain access roads for the weather stations and ski lifts, with volunteers manning each peak, for rider safety and a moral boosting ‘courage’ or ‘allez allez, bien roulé!’. Brightly coloured course markers thankfully stood out through the dense cloud. The drop off the top was fast, but brief, clouds clearing to reveal the mountainside hugging track winding its way up to the top of the next peak. 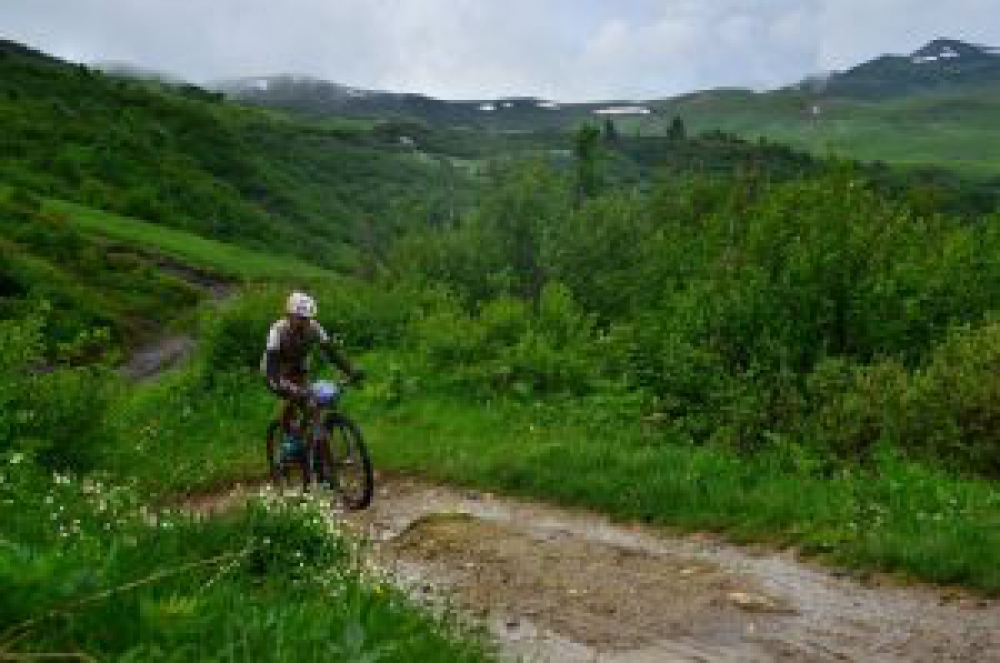 Super technical singletrack dropped us into Combleux. Loamy and super narrow in sections, mostly steep and rooty, grippy in the dry, tyres having little chance in the wet.

Life is full of 2 way choices, take one direction or the other. In Combleux the left chute would be another 40km and nearly 2000m of climbing, the right and the race was done. A hearty cheer went up as I went left to the feed station 500m away to collect my 140km sticker. Cut offs are there for a reason, but it is still a cruel end for those still with the legs and motivation to complete the full ultra. Strictly enforced at the 100km mark in Combleux, many had their race end here. 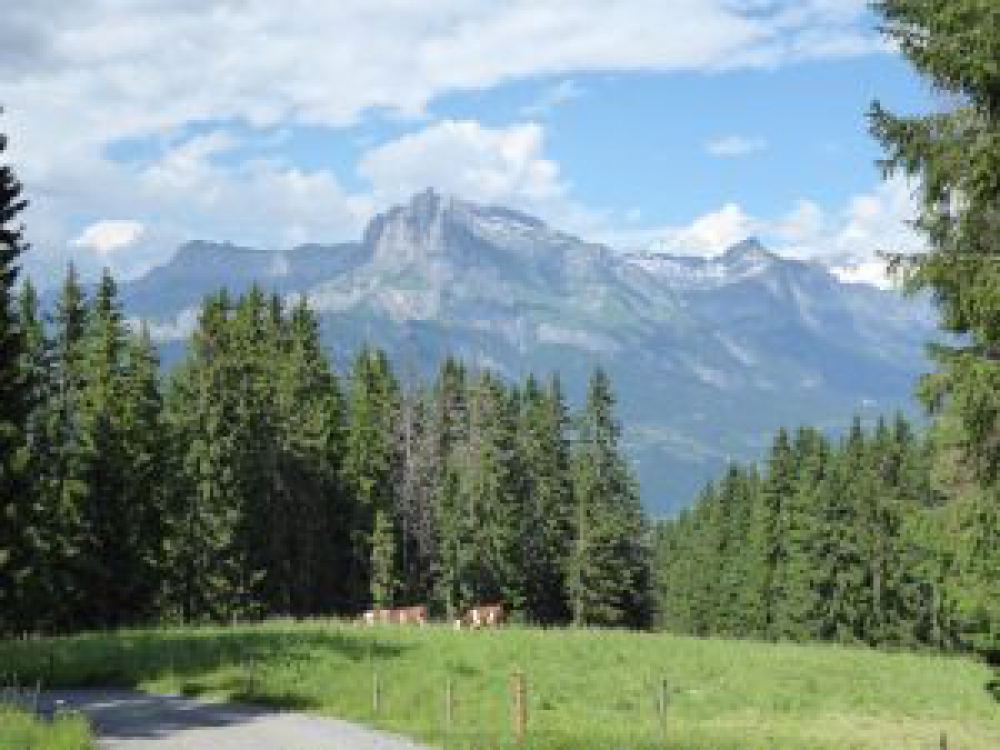 Those manning the feed station were used to the weary faces coming through, they couldn’t have been more helpful. From here it was a 23km meandering ride up to the Tete de Torraz at 1930m, save for a brief descent about half way.

Everyone you passed by cheered with encouragement. Rider numbers were now down to a few, making it feel like you had the trails to yourself. The surroundings never failed to impress. The constant change in terrain and trails kept the mind focused as super tired body tried to remember how to ride technical and rolling singletrack, and the legs turning up the last few, steep climbs.

The last feed station sat at the bottom of the final climb out of the deep hills, ramping upwards, towards Le Plan de L’Aar at 1730m. Legs started to stiffen quickly as water bottles were filled. A cheery ‘courage, ce n’est pas loin!’ set the mind for this final push upwards. Taking in the glorious views one final time over the top, a tired body and mind had to concentrate hard to keep the flow going down the long descent. Mountain singletrack became urban trails inbetween hillside houses, finally dropping out of the trees onto tarmac for the final push along a shallow climb to the finish.

What an amazing route, so much better than expected and that little bit tougher due to the weather. 4th in M2 category, so not a bad day’s riding. One of those races to return to.

The best way to get there is to fly to Geneva airport and hire a car. Accommodation in Megeve can be limited and expensive depending on when you book. We stayed in St Gervais les Bains about 20 minutes easy drive away.

Bike wise, I rode a Niner Air9 RDO hardtail with their RDO seatpost which flexes to give a softail like feel. The frame itself added some welcome compliance too. Quite a few riders had light weight fullys, which would have been perfect for the descents, even better had it been dry.

Tyre choice was Continental Race Kings, a perfect combo of speed and grip, although nothing but pure mud tyres would have gripped in some sections. For added comfort upfront I used Ergon GS1 grips, and their SMR3 saddle.