Matthew Jones recently did the Dyfi TWICE in preperation for the 24hr worlds soon, he sent over his race report for us all to read.

How do you make the best event of the year even better? Do it twice!

The annual pilgrimage to the welsh hills once again took us with caravan and hound in tow to the small town of Machynlleth. The trip always involves meeting up with an eclectic mix of old and new friends most of whom start to blur in to that category of "how did I actually meet you again"? This year I wanted to add a few extra miles so thought I’d go round again to see if I could catch the back markers on lap two and most importantly make it to the feed station the second time before they were fully packed up. I asked fellow endurance racer Carwyn if he fancied it so we planned to meet up at the finish line for lap 2 knowing we probably wouldn’t be that far apart. 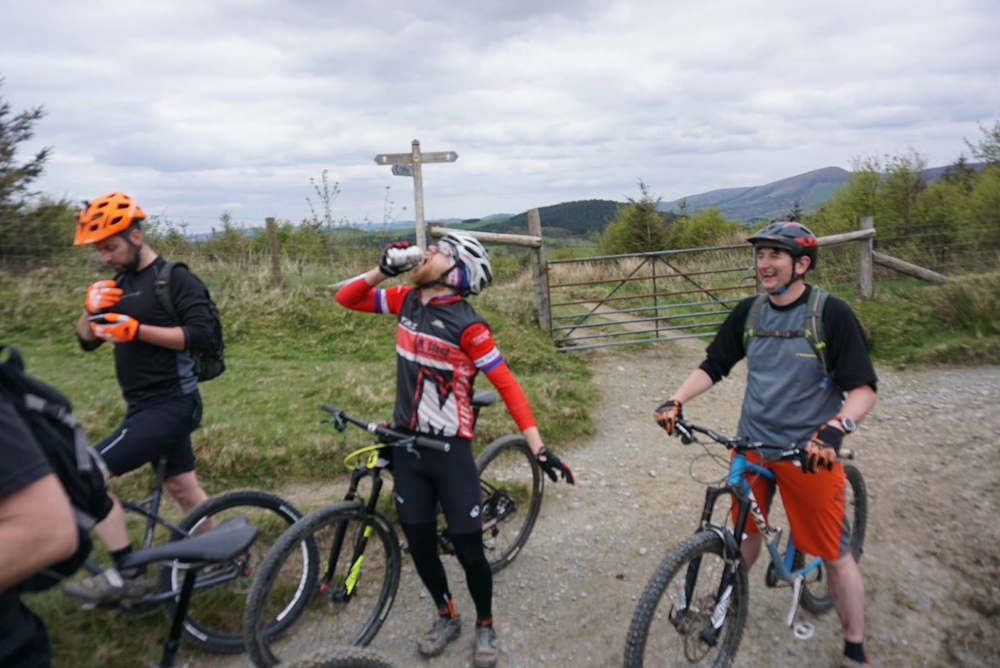 It was the first year that the event organisers started charging the going rate for these sorts of events but it didn’t stop the usual rapid sell out. Other than that everything else was as good as ever although increasingly I don’t seem to ‘do the Dyfi’ properly any more swapping late night beer tent dancing for a decaf cuppa in the caravan. I did make it out on the usual lap of the local hills with a good bunch of mates old and new which gave me a chance to set up the new Scott Scale race machine a bit more as it was only my second outing on it. Training for the world 24 hour championships in a few weeks has meant some lonely long rides so it was nice to actually speak to other human beings on a ride for once. 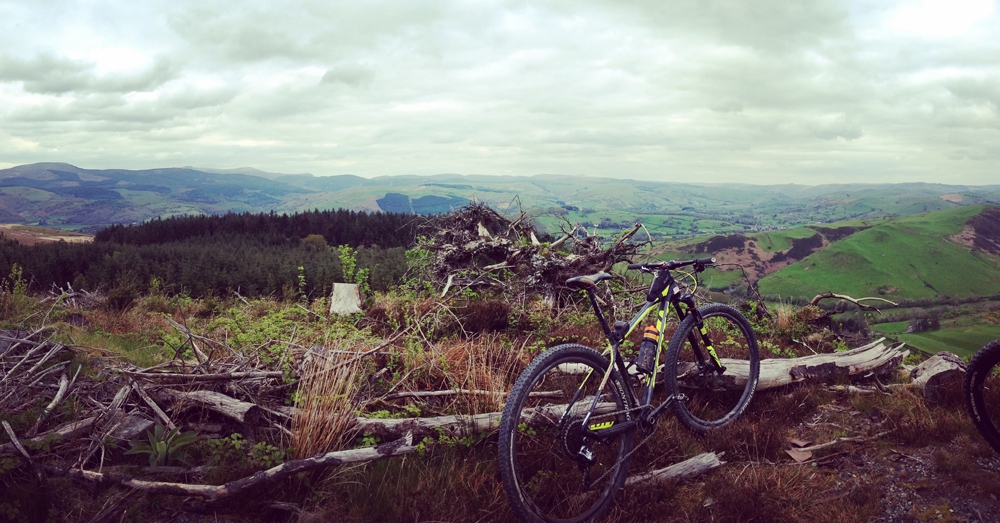 Making a few last minute tweaks to the new steed the next morning meant I didn’t quite make it to the start line the apparent 40 minutes you need to in order to get anywhere near the front. Fortunately fellow E3 Coach guys packed the front of the grid and let me sneak in. The usual sketchy lead out was navigated successfully with the all day back packer brigade going backwards on the first climb like someone pulled a parashoot out of their hiking bags (why bother putting yourself at the front?!). 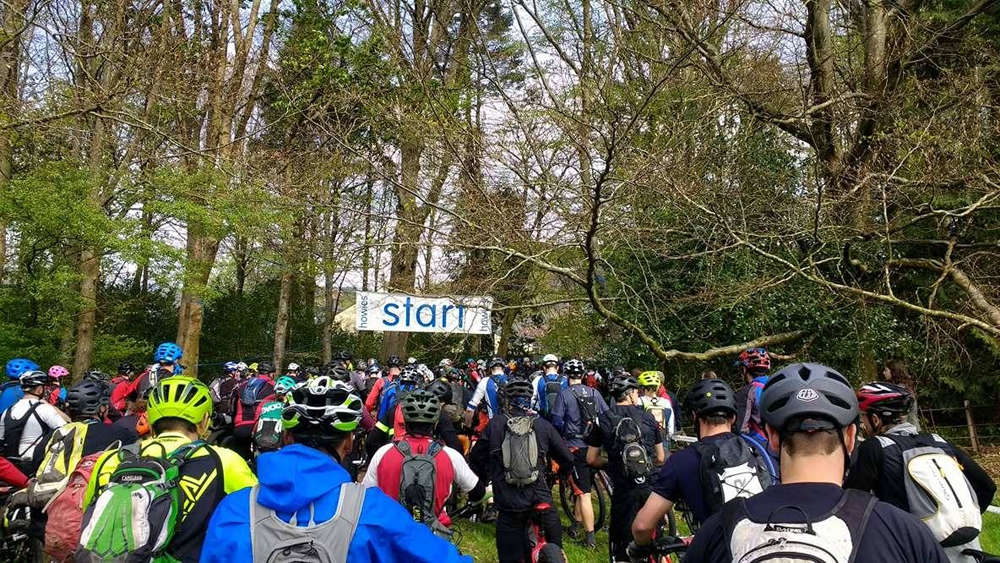 I was feeling decent and shot up the first climb faster than ever according to Strava and settled in to a decent pace somewhere in the top 10. I came a cropper down the first main descent of the moorland top taking an inside gully line I had done many a times before however this year it had been totally washed out so my pedals got stuck in the ruck and I dismounted. Picking myself up I looked mystified at the marshal who helpfully pointed out they had had a lot of rain this winter! Part way round one of the leading riders flagged me down asking for a pump, I stopped at first thinking he might have fallen off to check he was OK and then computed that this chap hadn’t brought a pump on a ride in the slatey hills of Wales, what an idiot! For some reason I took pity and gave him a CO2 can but in the process was caught by a couple of riders including my buddy Steve ‘machine’ Day. I then rode with the singlespeed Steve’s (Steve Chapman being the second) at a decent lick, me mostly thinking how they went up the hills so fast with one gear! The route was as brilliant as ever with some seriously hairy fast rocky descents making me grin a lot. Just as me and the Steve’s were getting to the top of a steep slatey rock fest a keen lad sprinted round us to get to the descent first only to then go lead us out like a safety car down the techy stuff, I snuck past him just before the end but he was so out of control I have had to bail out of his way whilst he they proceeded to crash and the bottom leaving the Steve’s to taking avoiding action as well, not the smartest of moves boyo. 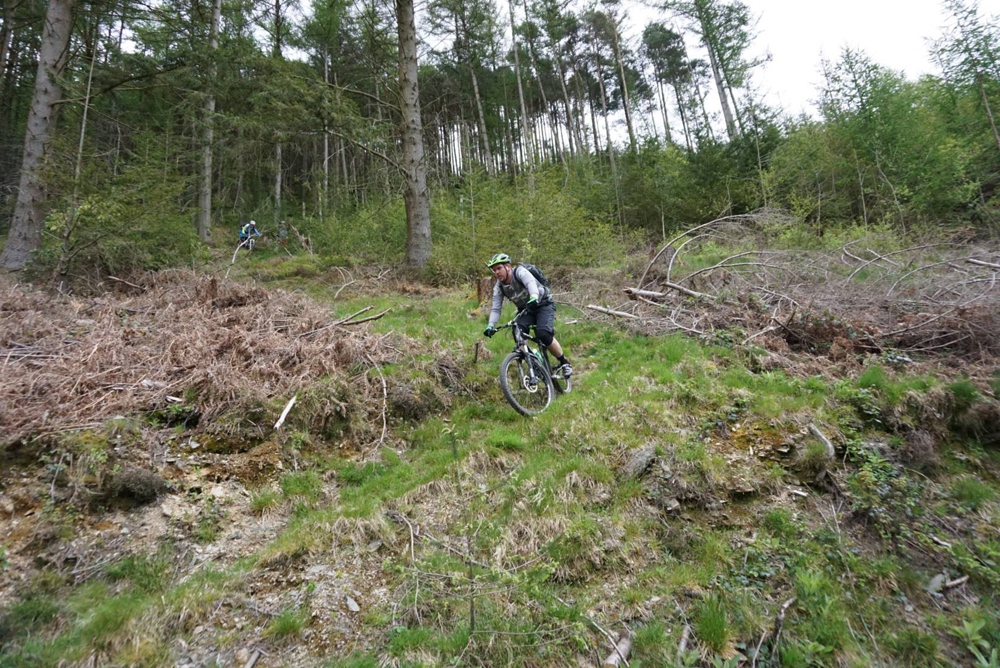 The pisssh of rider tyres getting punctures was a familiar sound on the route and I also fell victim only minutes from the finish. As I’d given my spare gas to that guy earlier on I only had one can left so knowing I was going out again I decided to pump it up old skool style with help from some stabby stick things but it took a couple of goes to get it sealed and in those few minutes I could hear the crunch of lots of rider tyres going past, doh. I got going again but as the final climb from the beer tent was missed out this time there wasn’t any time to catch people back up. It was a surprise to see the finish so soon and realised I’d lost 6 minutes faffing to the Singlespeed Steve’s who had good rides on one gear a piece.

I tucked into my bag of food the marshalls had kindly taken to the finish for me to reload with before Carwyn arrived and did likewise. My tyre was still playing funny buggers so we faffed a bit more with that before heading back up the main climb again for lap two. It was awesome to ride the route again with my head up taking in the views for a change. We didn’t hang about mind as the weather looked like it was closing in and heading up to the top of the moors was a bit chilly. Not having any other riders blocking the way and Carwyn being a lad that equally enjoys the descents we were having fun whilst being a bit more careful to avoid punctures or worse.

As we came up the climb to the feed station we started debating whether or not anyone would still be there or whether there might be a few scraps of flapjack we could scrounge off the floor or something. We looked ahead and couldn’t see anything but gloriously as we rounded the corner the legend that is Fraz (Mr Dyfi) was just about to pull away with a trailer loaded up from food leftovers. We had told him to look out for us the night before but when we knocked on his window ravenous for flapjack he was probably a bit surprised that we had made it to the feed station in time. He whipped out a big box of awesome flapjack and we tucked in and chewed the fat for a couple of minutes. The flapjack obviously contained super powers as Carwyn’s first pedal stroke after scoffing a slice resulted in a snapped chain from mad power the flapjack had generated. A quick repair and we were off again. 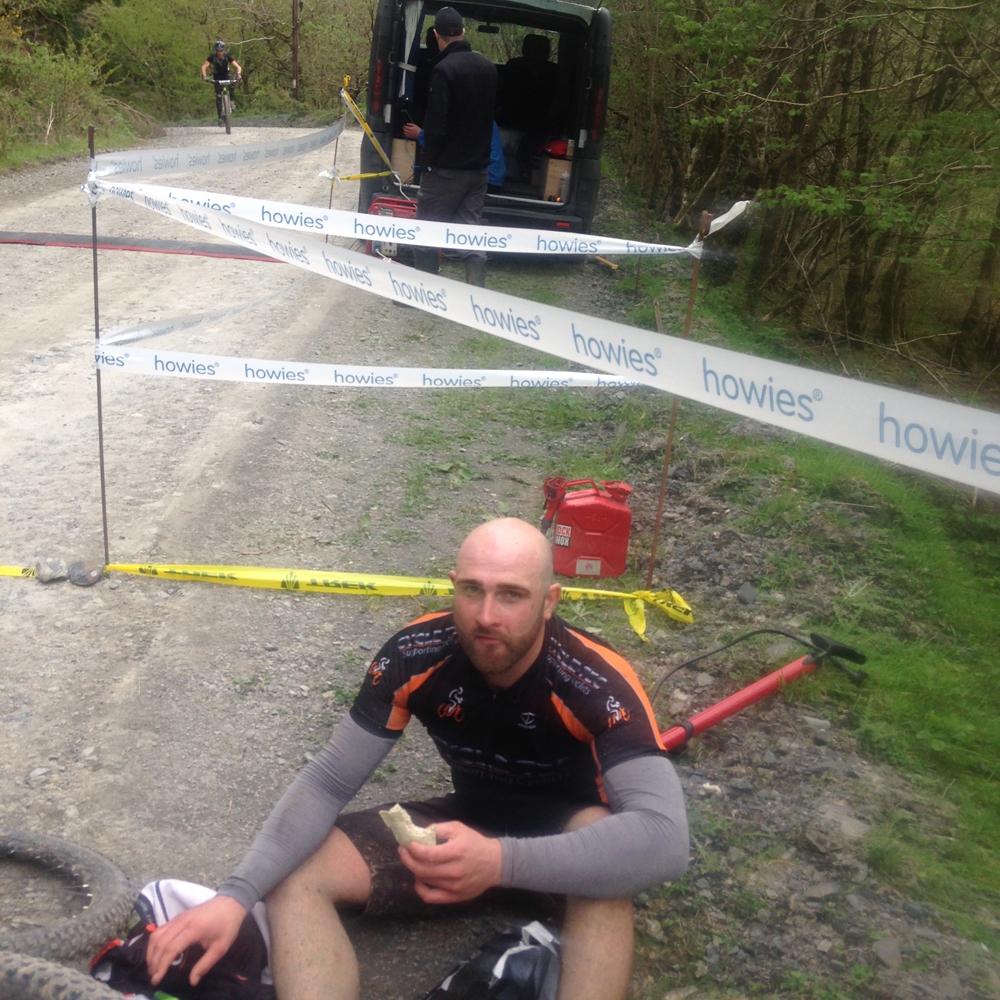 The next debate was then whether or not we would catch anyone before the end. I had a feeling if we were to catch anyone it would be people who had set themselves up for a few pints at the beer tent just before the end. Not long before the beer tent we spotted riders on the horizon with cheese strapped to their helmets? We passed another couple of riders offering them some encouragement to make it back to the beer tent and more importantly checking if they needed anything as they’d been out for quite a while on lap 1! We rolled up to the beer tent to a reception of my mates who do the Dyfi properly and looked like they had been there a good while. Fair play these boys know how to get literally every last drop out of the weekend! I took a lean on my mate and chugged a couple of beers before we rolled back down the road to the finish where some lovely left over sausage rolls and more flapjack awaited us.

A good outing and getting towards some form just in time for the World 24 hour Champs in Italy in a few weeks time.