I've been trying to drag a few more local mates along to races this winter to share the fun. Next time I'll have to leave my buddy Tim Trew at home as he smashed me and all but one of the field in round 3 of the Mad Dash in the Park at Ebworth near Stroud.
After some decent xc results over winter by my shorter race standards I was looking forward to my 3rd outing at the local xc series. As everyone comes up against sometimes you can end up with 'one of those weeks' in the run up to a race. These ones are still just winter fun for me but with a chance of securing a series podium it was pretty tempting to take this one a bit more seriously so I polished off Race bike number 1 whose 11speed drive chain I try to reserve for the dryer months! The week leading up wasn't exactly ideal, finding out that Trek UK wouldn't warranty my cracked Race bike number 2 frame, saying it had taken and impact as there were some marks on the rear mech. Not sure if they've ever seen the rear mech of a bike that has actually been ridden off road lately! To add insult to injury, literally injury came. Doing some lunges as part of a mid week E3 Coach prescribed session I took my eye of the ball and pulling my hamstring a bit. Concentrate whilst your doing strength work kids!
The course was the usual winter muddy fun with a mix of terrain but enough to make it interesting with a couple of sharper climbs than the past rounds to get the lungs working and a nice sweepy gully section to keep riders on their toes! 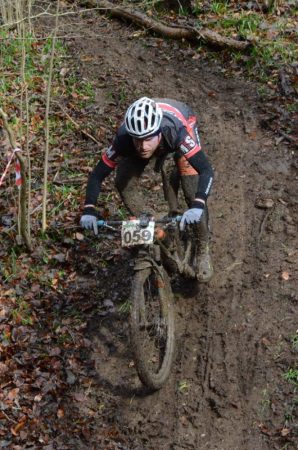 I had taken 3 days off the bike and hoped for the best on the start line. My buddy Tim Trew came up for the trip after enjoying a good thrash round the woods at round 1. We've always known Tim was a bit of an animal on the trails, always on a pretty shonky ride but nonetheless ploughing on at a fair lick. After telling me he'd been running to work 'a few miles' every day to his new job I still didn't expect him to rock up and shoot off at the start after series leader Nic at 110%. Oh and did I forget, he was on a singlespeed and this was only his 2nd ever xc race?! Tim shot past Nic and I as we led out the pack and held the lead for most of the race until Nic eventually caught him due to Tim having to run sections in the mud! I rode with Nic for a while but was a bit cautious about my hamstring which seemed to be holding up fine. Aerobically I felt pretty good though so I must be getting a hang of these short xc things a bit better. Nic gradually pulled away and chased down Tim. I found myself riding alone with a decent gap back to 4th. Fairly content I plugged on until the last lap where I heard a shout from ahead to see Tim not far up the road towards the end of the lap and finish. At this point I felt mixed emotions with half of me thinking ATTACK, but the other half thinking it would be a total injustice for Tim to lose out on 2nd at the last as his singlespeed was getting stuck in the mud. Whilst pondering this I sort of didn't attack or sit back and by the time we got towards the top of the climb Tim was pretty much at the finish so I shared a quick bemused laugh with Nic about how well Tim had done then rolled over the line stoked for Tim, big hugs all round and me thinking immediately he should do more of these things! Tim must have been pushing hard as a couple of days later he was in hospital getting his appendix removed, get well soon buddy! 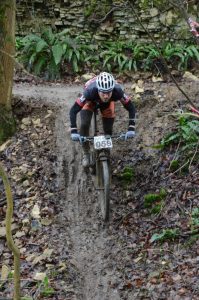 I'd secured 2nd in the series overall by coming in 3rd and despite being a bit sore had got through unscathed which was good news given plans for some final hard training before an attempt to do the South Downs Double a few weeks later.
Thanks as ever to all my sponsors that make this possible 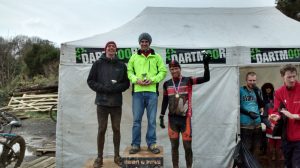