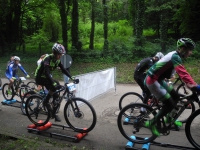 Bike the Rock, in Heubach, Baden Würrtemberg, Germany has become a legendary race over its 12-year history. The 2016 race is certainly one I won’t forget for lots of reasons.


The course is one, which suits a climber with descending skills. The climb is quite long, (half of the course) and drags on over the top for a while before the twisting steep descent back into the spectator arena. This descent is more difficult than it first looks and therefore causes problems for any rider who isn’t 100% committed. Added to that, it had been raining no stop for three days leading up to the race.

It was an early start for the junior men, 8.30am. Eight thirty in the morning! This meant getting up at 5am to have any chance of eating a good breakfast and not seeing it again during the race.

With two of dad’s coffees plus a Red Bull, I was as awake as I was ever going to be and lined up 42nd on the grid. By the top of the climb I was positioned around 20th, and knew that if I could negotiate the descent anything like I had been doing in practice, I would be set for the next lap and able to pass more riders on the climb.

Unfortunately, I let my nerves get the better of me on a critical 180° steep switchback over roots and had to dab. The rider behind went around and the next rider crashed into me.
The lap times and position stayed steady for the next couple of laps.

I was in 29th position on the last lap as I started the climb for the final time. Up ahead was a group of seven or eight riders. With every possible ounce of strength left, I dragged my weary self up the climb and back into the top 20 by the false flat before the descent. Just then, a twig got caught in my rear mech and jammed my gears. One by one, all the riders I’d worked so hard to pass on the climb came passed as I wrenched at the twig. After what seemed like an eternity, I was down to 27th place and the only way to stay in the top 30 was to be aggressive on the final descent. Easier said than done when you are utterly exhausted and the track is a mud bath.

I crossed the line in a group sprinting for the final top 30 places and finished 27th.

I am pleased with my form and my descending is getting better race by race. I need to work on being more aggressive on the descents when I am already at maximum effort. After two years of racing at HC level I have finally broken into the top 50 of the KMC International Bundesliga ranking. Next step is top 30.

Once again, we met a lot of wonderful people last weekend and I especially want to say a big thank you to Team Multivan Merida’s Daniel Savine and Fabian Aust for their technical advice and support.

The next stop on this European race tour is Kirchberg, near Kitbühel, Austria for the UCI Junior World Series.