Machynlleth served up a wet and wild weekend in mid Wales combining everything that’s best about mountain biking, bikes, beer and mates gathering together to take on the Dyfi Enduro. We were pretty glad to have recently taken the path of caravan ownership and on race weekends like this it proved to be an absolute godsend. After the somewhat testing conditions of 2015 riders were hoping for some more vitamin D from the sky’s but were instead served up a bizarre mix of four season weather with everything from hail through to high winds and bright sunshine packed in to the space of 24 hours.

We arrived on the Friday evening to take advantage of the extra night to catch up with friends and absorb a few beers from the vast array on offer at the adjacent comedy festival beer tent. Saturday we headed out for a short but excellent loop of the local hillside. Machynlleth certainly has some of the best and varied riding in the country and with Dan Atherton now doing some digging in the woods this place is going to go from strength to strength.

The late start of the event at 11am combined with an early(ish) bed the night before in the caravan meant I was unusually rested for this one. Caravans trump tents kids! It had been pretty rainy all weekend and lining up at the start didn’t disappoint either. I went for a waterproof gilet, arm and legwarmers to keep the worst of the conditions out for the expected 3 hour pedal. These turned out to be spot on choices as it wasn’t as cold as it looked. The first climb always gets the blood flowing!

It was good to catch up with some familiar faces on the start line and there is always a good group of quick top 20 riders to keep things sharp during the non ‘race’ event. Seeing Nick Craig out front meant it would be a quick one…

I got a decent position on the lead out along the back roads to the hills and measured my effort up the first 15 minutes of mostly climbing steep upwards along the fire road. The conditions worsened near the top and on the first descent my glasses totally steamed up and I couldn’t adjust them before finding myself bottom bracket deep in a rocky rut. I eventually succumbed and was shot out the front door but managed to scramble back to the bike fairly quickly whilst dodging streams of riders coming past. A bit bruised but otherwise ok I was then a bit more cautious than usual on the other awesome descents the route offers up apart from the world cup descent gap jump which is a bit tasty without a dropper post. Caution in the main was probably a wise move as I witnessed people jettison sideways in to the abyss on the world cup descent and other similarly terrifyingly quick plummets through forests, rocks and slate.

The route was mostly the same as previous years but some pond like puddles kept you on your toes more than normal, the risk of disappearing or coming to a standstill in one of those was pretty high as the rain kept battering down all day. It was certainly an advantage being near the front as I can imagine the trails were pretty choppy with 800 riders ploughing down them. 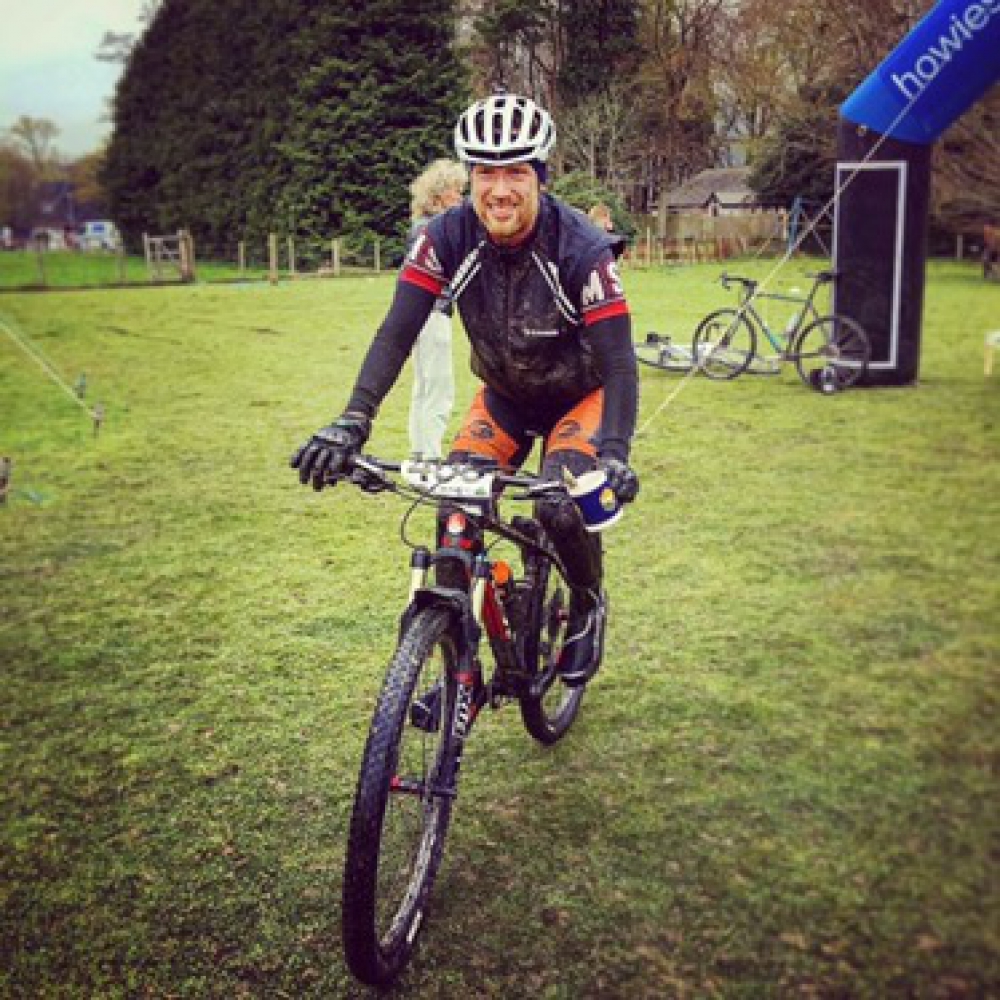 I made up a few places as other had mechanicals and eventually dropped a group of 3 riders I had been jostling with for an hour or so only for Matt Page to ease past in his traditional start slow get faster pacing. He stayed about 20 seconds in front but I created a bit enough gap behind to keep the chasers out of sight by speeding up round the bends so not to give them hope. Not sure if that worked or not psychologically but they didn’t catch me. In previous years at the beer stop (Yes there is a beer stop right by the end!) I had flown by without the hand up of a beer but this year for some reason I grabbed one of the fly and tanked in back, half washing mud off my face and the other half just about making it down. A few uncomfortable burps later and keeping on the gas I went upwards to the final climb. For some reason I thought there was an additional climb somewhere before the end but a change in the final descent to a really nice flowy and mostly hard packed surface had disorientated me a bit. So much so that I popped out on to a fireroad and saw a 100m to go sign and wondered whether I had gone the wrong way. As it turned out I hadn’t so came over the line feeling relatively fresh but disappointed not to have been able to give empty the tank properly on the final climb. Around 12th rider back was my best finish to date. Strava denotes I took over 18 minutes up the first climb in 2010 and just over 13 minutes this time round, progress!

Before the ride I had decided to go out for some extra hours after the event to add some endurance training to the weekend. Riding back to town soaking wet through made getting straight back out again somewhat of a mental challenge. Still, a quick cuppa, pork pie and change of clothes and I headed back from whence I came passing many confused riders going in the opposite direction probably thinking that poor sod will never find his dropped phone...

I boshed round the Cli-mach trail which was mostly hard surfaced so despite the continuing rain was nice and fast. The final descent on that trail is properly awesome so I came back to the campsite with a smile on my face and ready to tuck in to a few well-earned beers. Watching other riders coming back dishevelled hours later but with grins galore summed up the spirit of the Dyfi Enduro. Definitely the best event of the year.

Thanks as always to the people who make fun things like this possible: Tenn Outdoors, M Steel Cycles, Roll for the Soul, Weldtite, Torq, Ultimate Sports Engineering and ESI grips. Also thanks to Ant @bristoltrails for some nice snaps on the hill.