Brits and Irish were well represented at this 4 day stage race, taking home some well deserved podium spots. Sally Bigham stormed it in the elite women for the win with 3 other Brit ladies in the top 10, Helen Wainwright, Carla Haines and Jenny Lee. Julie Elder did a great ride to win the M30 ladies with Natasha Litherland also riding amazingly well to finish in 3rd spot. Danielle Petersmann kept up the pace to take home the win in the M40. 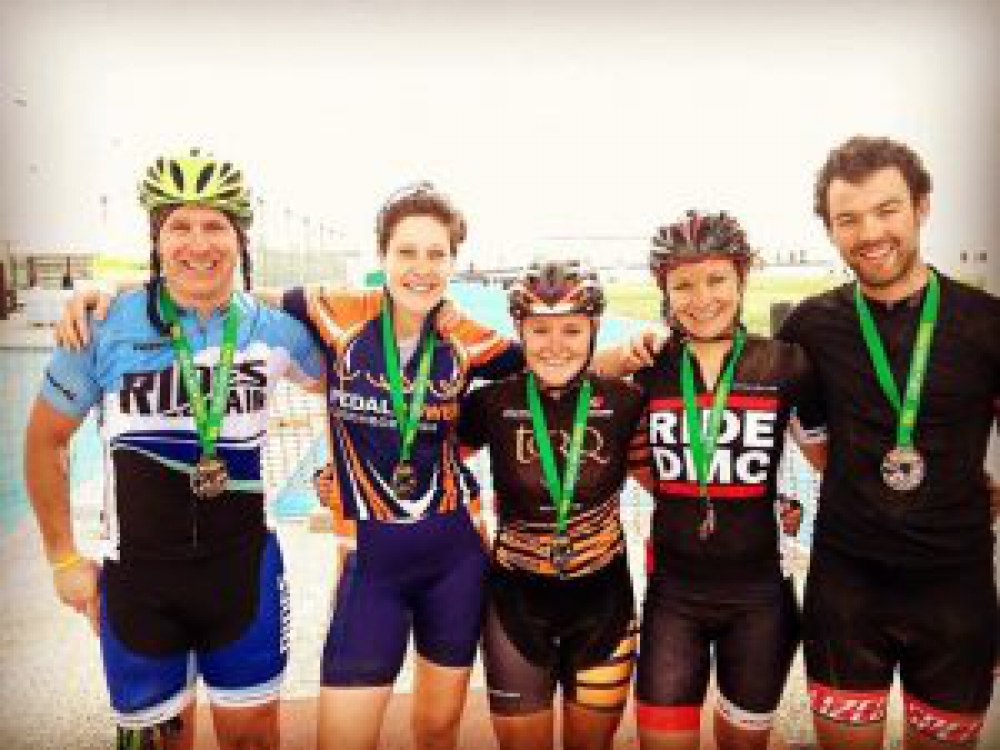 In the large and high quality men's field, Ben Lawson was strong in the U23s to take 3rd with James Houghton putting in a great ride in his first time at Club La Santa and his first ever stage race. In M30 Tom Atkinson rode well for 5th place with Paul McCarter, David Pusy, Peter Flick, Sam Pontling, Brian McCarthy, Andrew Woodvine and Paul Cook all putting in strong performances in a tough field. 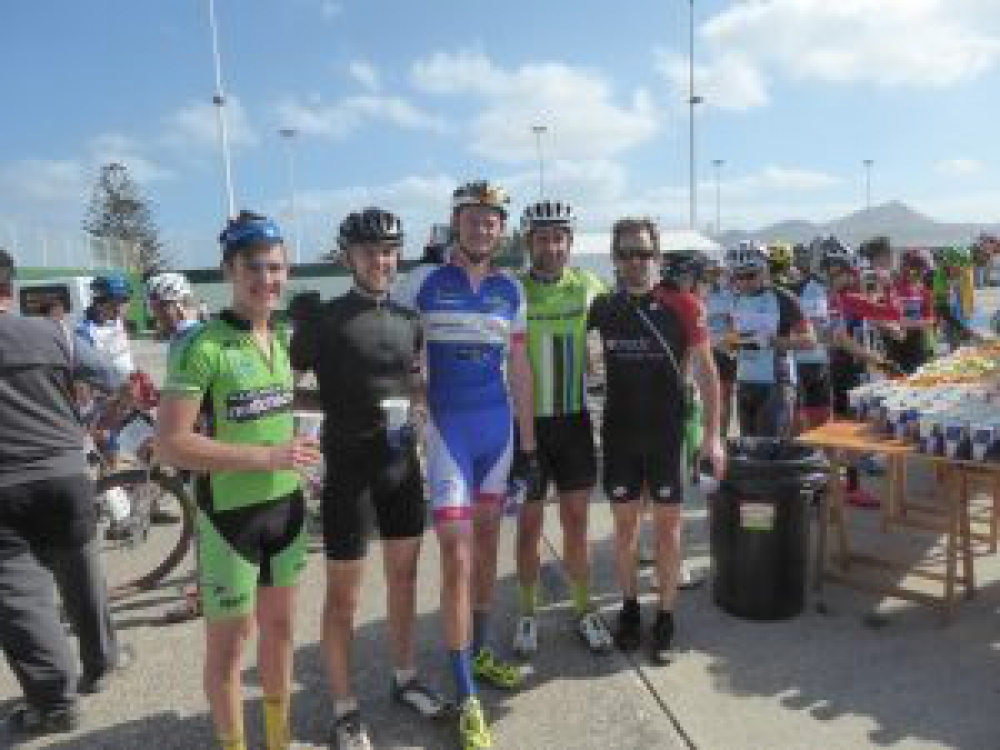 The M40 category wasn't any easier with the top 2 riders up there with the elite men. I took 4th spot, a minute off 3rd, with Jon Roberts close behind in 5th and strong rides from Andy Jones, Rich Samuel, Matt Hart, John Speed and Chris Coombes. 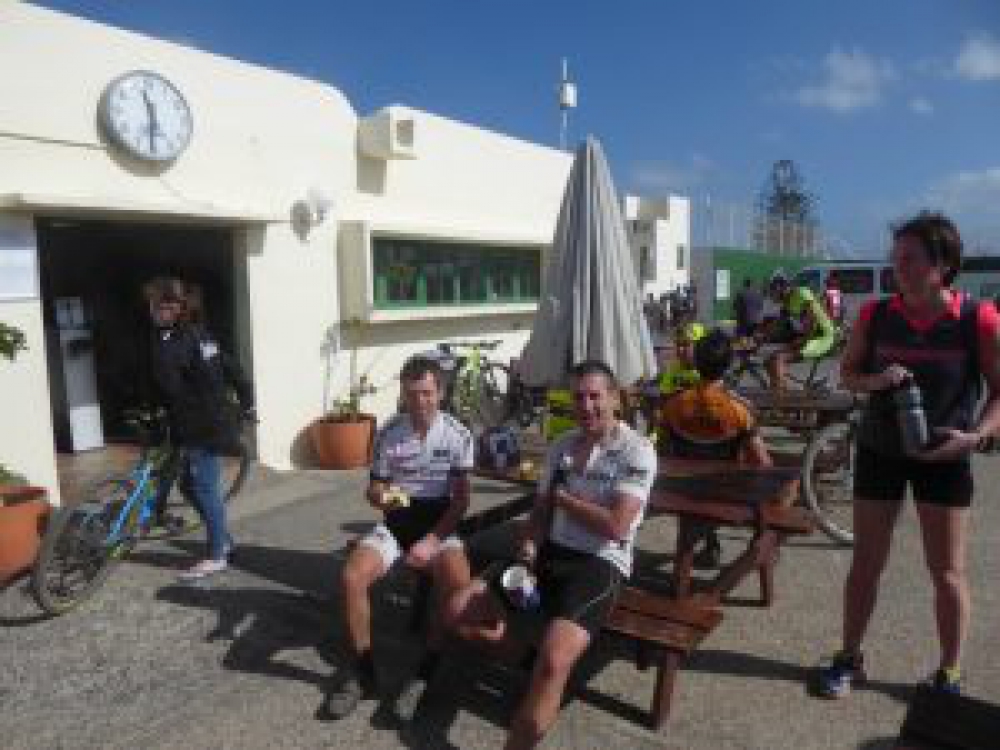 Matt Ellwood did well in the M50 and Fred Macsorley represented in the M60 category.

For those used to marathon races, stage 4 was the one for them, including myself. 88km with around 1650m of climbing. The wind was again just a pleasant breeze, taking the edge off the heat.  The previous stage 3 was a tough one, not long, but just really intense. Most of us were waiting to see just how our legs would feel on stage 4! It is amazing though just what we can train our bodies to do. Push so hard that you almost fall off your bike at the end of a race, then get back on it the next day to ride 4 times the distance.

The gradual up hill from the start strung out the field quickly, the pace still quick after 4 days in. Perhaps most riders knew what was coming up 7kms in as well as I did. The double track would soon become upward rocky singletrack trail, where wheel traction is at a premium, especially with riders all jostling to get ahead, passing the same spot where I had a small off 2 days previous coming down.

Once up, the singletrack continued through the volcanic rock. Over taking spots were at a premium or it was a super bumpy and slow ride off trail. It was a sharp drop in gear choice to get up the section of slick rock we came down on stage 2,  Speeding down the other side, the field was now hugely strung out, the pros and strong boys well off into the distance. 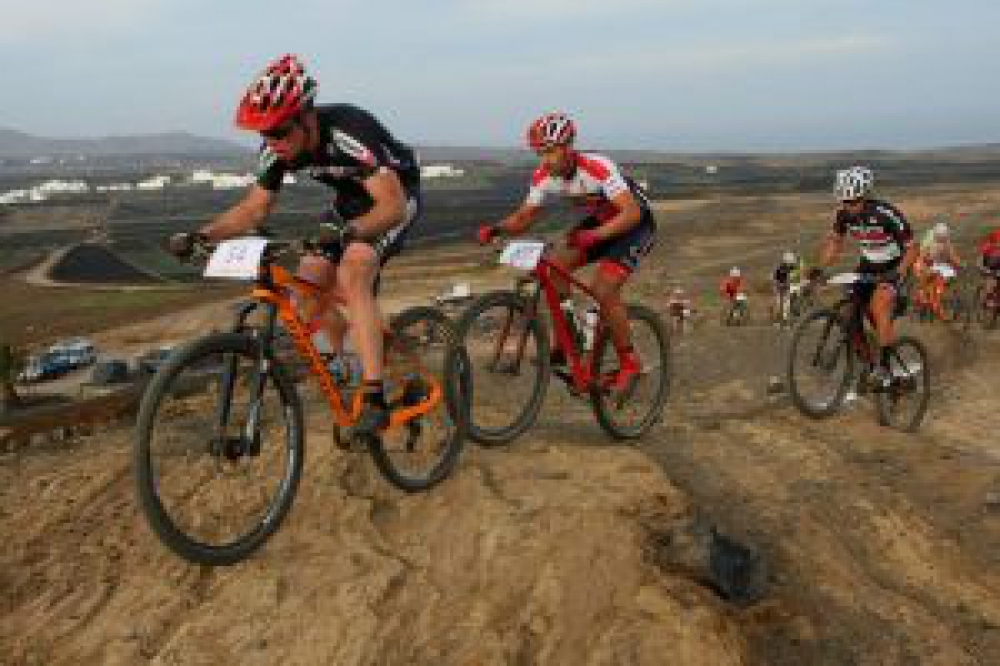 Stage 4 played more to my strengths, and weaknesses. The longer distance and more climbing was good, the added descending not so much. There is nothing quite like a fun descent, just that I havn't  got the skill to descend fast. Jon Roberts and I are pretty well matched speed wise, but he can descend, fast. Every event we do together is cat and mouse! Good times racing with him here. 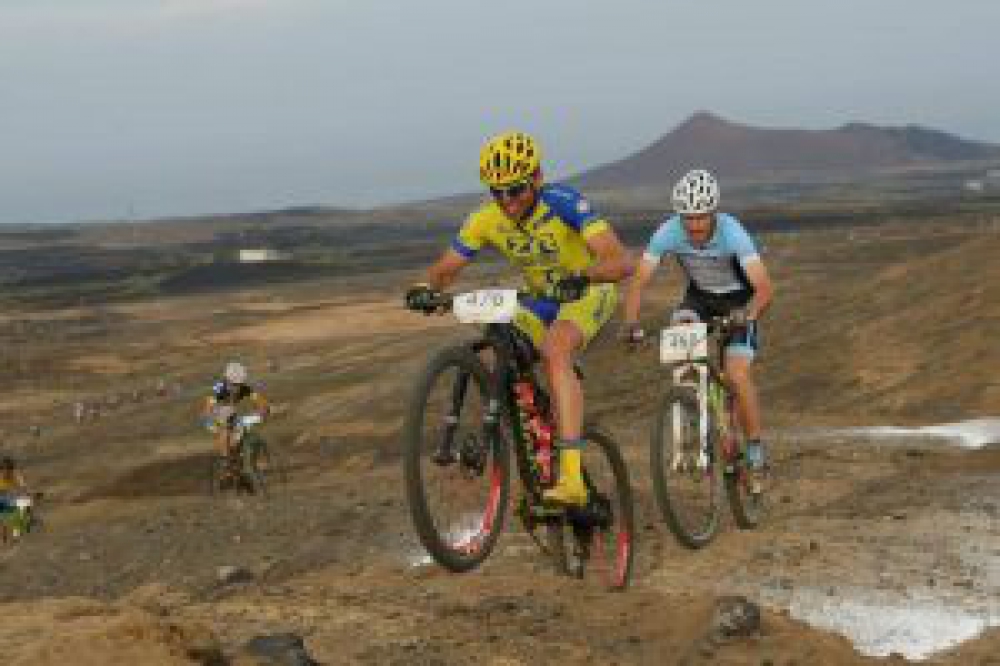 The route ebbed and flowed up and down with a general upward bias until the 20km mark, along the now familiar terrain, a mixture of rocky, dusty and sandy. The race flowed fast as did the trails, ever changing from double track to rocky singletrack through constantly changing scenery. It was hard to admire it all at speed. Keeping the speed up was a mixture of what was left in the legs and lungs and the ability to ride smoothly over the rocks and not sliding out in the twists and turns. Being with a group wasn't as essential today as the wind wasn't strong, but it helped to keep the momentum. 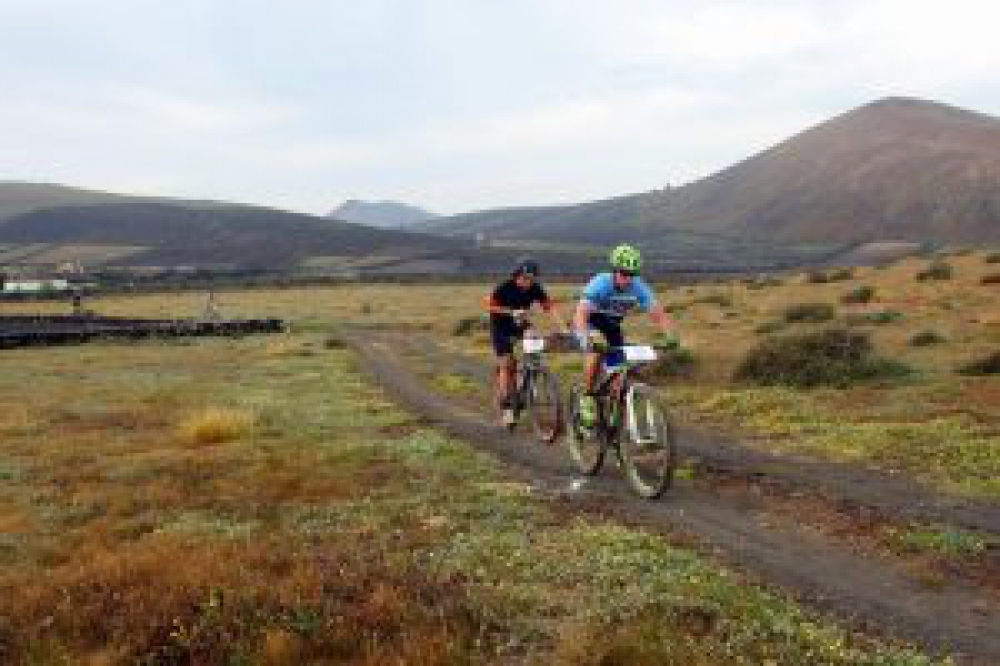 Tunnels were a feature today, one we went through twice, out and back, where most people could duck enough to ride through, the other not so much! I made the mistake of seeing Sally Bigham go through infront of me and thinking that it was ok, but then she is shorter then me. Helmet scraped along the roof even at full duck! 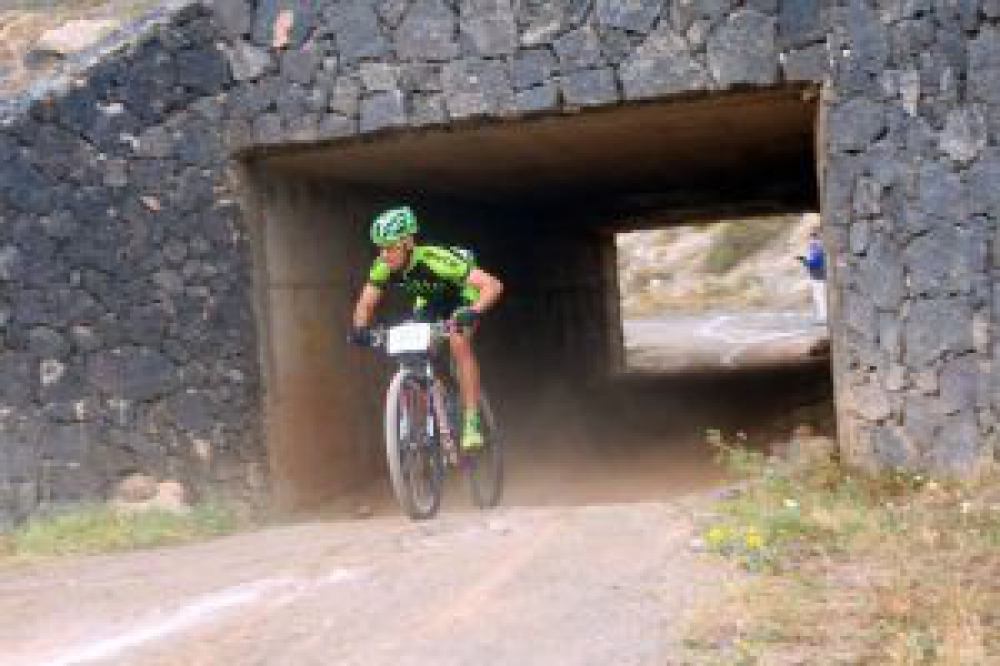 The TT hill climb had taken its toll on some riders' legs. The group I was with slowed at every ascent, but my legs seemed to still be giving so I pulled away, but with some descending coming up I knew that they would soon be back biting at my back wheel. 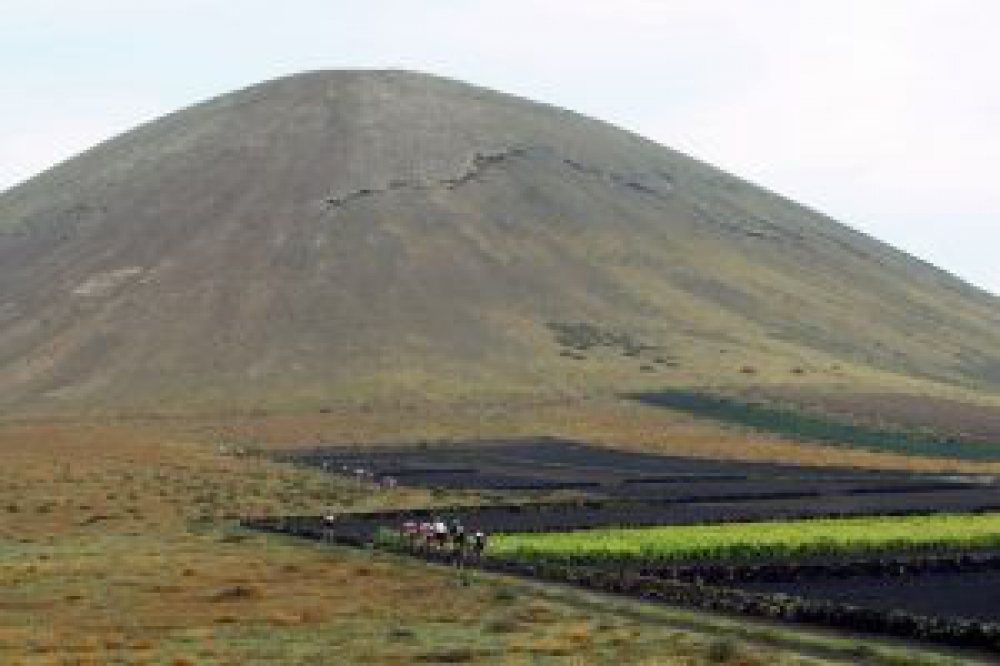 There was some great descending today, rocky and challenging, the bike sliding down the loose sections. Jon and Tom were back on my wheel  along with a few others which kept me rolling faster in the now, larger group along a flat double track as we headed towards the long climb of the day. This would take us back up to where the previous day's TT ended.

It was heads down and dig in as the trail up wasn't technical. What looked like the top wasn't the top, the route taking us left along the ridge line towards the observatory! Once up, it was back down, fast, via parts of the TT route. Signage has been really good throughout the race and easy to spot, but not concentrating on the descent meant missing the right turn off the mountain (although it was well signed)!

Only the best descenders rode the next 400m section. It was super technical and loose. I admit, I walked! I admired the skill of the riders as they passed me who rode it all the way, typically guys I had passed on the way up. The climbing wasn't quite done though. A steep and loose section loomed before rejoining the TT route in reverse. We passed the deep canyon again, riding by along the narrow trail, this time at speed, with the big drop to our left. No sideways glances this time, all eyes forward!

Descending a different way from the TT route now, I could hear riders on my wheel as the trail widened, Jon and Tom were back. From here on in, the route was rolling back to the finish for about 18km. The group was together for a while, but a couple of riders just wouldn't take a turn at the front. The legs still had some zip in them so I just pushed on hard at every climb and soon pulled away. The sandy double track was mostly super quick, but deeper sections dragged at the wheels, too high a gear choice and you came to a stand still. On a couple of occasions it was just better to jump off and run briefly. I was on my own again until I got joined by a couple of Spanish riders on the final few downhill sections.

Once back on volcanic rock, the end wasn't far. It finished along a ribbon of singletrack through he rocky terrain. No point fighting for places here to risk an off or a puncture. Done in just over 4hours. 3rd M40 back, clawing my up in the GC to 4th, a minute off 3rd. That's racing and what a race it has been. Waking the body up to race pace in January has been a new experience but one which should hold me and a number of others in good stead for the Cape Epic.

Full results can be found here.