To celebrate 20 years since my first mountain bike race, I thought I’d reflect on how mountain biking has changed

My first proper mountain bike, ignoring a Raleigh Activator seemingly made of lead filled with concrete, was an Orange Clockwork. A beautiful steel frame and fork, with teeny tiny 26” wheels and a 7 speed Deore XT groupset complete with thumbshifters. As time went on, and I’d cleaned enough cars and stacked enough shelves, I added a Rock Shox Mag 10 suspension fork - many a happy afternoon was spent changing the oil after every other muddy ride. Finally I rounded it off with some gorgeous Middleburn Cranks and Hope hubs, in blue, not purple... Just to be different. My ride was complete. Then some thieving scoundrel pinched it! 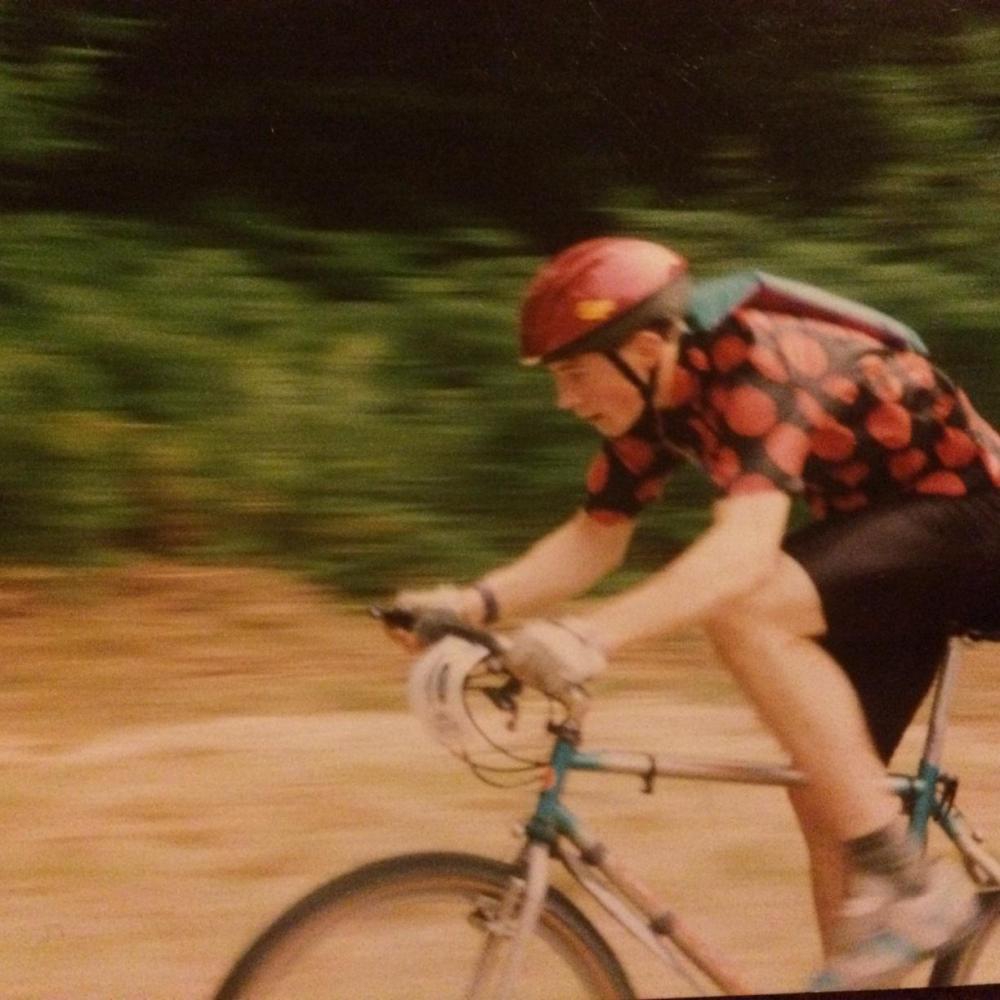 A lot’s changed since then. As the sport has developed distinct niches have emerged. Previously, one mountain bike covered all bases. In the beginning to race downhill you added a bigger chainring, job done. Now aside from cross-country bikes there are trail bikes, more hardcore enduro bikes and even gnarlier downhill bikes.

Frames were steel, aluminium and titanium with carbon arriving later. Carbon frames had been used on road bikes for ages, but took longer to be accepted in the MTB world. Carbon has actually been used for longer than you might think – who remembers the Lotus Sport with its huge, swoopy carbon downtube. Initial concerns about durability – “it’ll snap, a rock will go straight through it!” have proved largely unfounded, though I did have a rock put a sizeable hole in a chainstay at some point in the Kielder 100. Such is the strength of the material that I didn’t notice. Perhaps an epic in the Lake District the next day wasn’t a great idea, but just to make sure we reinforced it with extra strong gaffa tape!

Suspension systems have also evolved with forks adding travel whilst becoming lighter, stiffer and more reliable. Rear suspension too has developed with an explosion of new designs and systems all promising zero “bob” and the best ever suspension path. Things have now settled down and the introduction of platform dampening has perhaps been equally significant.

In the early days triple chainsets and a 7 speed cassette were perhaps the norm. The number of gears increased every year – I remember the clamour when 9 speed was introduced – “who needs 9, the chain will be too thin, it’ll wear in seconds!” As the number of gears at the back increased the number of chainrings went the other way – I was an early adopter of a double chainring system with a Middleburn Duo system. More recently single chainring systems are becoming very popular amongst racers and trail riders alike. With a wide range 11 speed cassette you can literally climb every mountain... Oh and wheels, remember teeny tiny 26”?! Seems odd that for so long they were the only option before 29ers arrived with a rush in the US, but perhaps taking a little longer to establish here. Now 26ers are a rare breed. Just to confuse matters 27.5 (or 650B) has also arrived, said to offer the best of both worlds. The cynics cry marketing con! I haven’t tried it so I’m sitting on the fence on that one! Bars have got wider, particularly with the introduction of 29ers, with around 700mm now becoming the standard, a substantial increase on the 560mm, or 540 if you were looking to save a few grams! Speaking of grams the craze of shaving weight wherever possible in the late 90s has largely gone. 120g alloy bars, replacing all those unnecessary heavy steel bolts with aluminium... even those for the cantilever brakes, eek! There were some big horror stories, seemingly everyone knew someone who’d snapped a bottom bracket axle! The development of materials, particularly carbon for bars and seatposts, means the same low weights are now being achieved, though without the risk of impending material failure and all that entails!

For all the advances in materials and the development of the gearing systems, for me perhaps the two most important improvements have been disc brakes and the tubeless tyre. Caliper brakes and then V-brake were a world apart from the powerful, super reliable, all-weather performance of today’s disc brake systems. Early tube and tyre technology was frustrating. Tyres were run at roadlike pressures to prevent pinch punctures and it felt like not a ride went by without someone picking up a thorn puncture. After a troubled start tubeless systems are now widely used. The first efforts with the UST system used heavy tyres and required the strength of a bear to get the tyre onto the rim. If you did puncture it was time to call for emergency recover! With modern tubeless systems and sealant you can run super low pressures for wonder levels of grip and then gleefully pull out the thorns to watch the sealant do it’s spluttery magic... Most of the time! 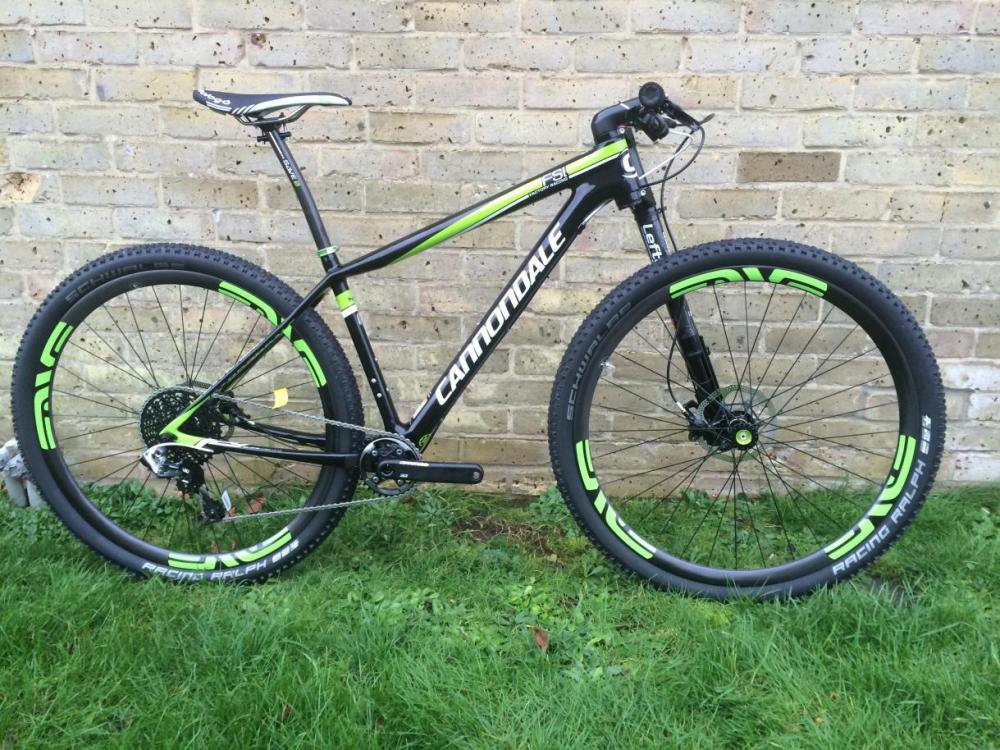 Dripping with technology…20 years on things have changed somewhat![/caption]

There are also some negative aspects to all this development. The number of standards have become a bit baffling for the home mechanic, such that it’s sometimes necessary to consult a detailed flowchart to order a replacement headset bearing! In the quest for lightweight and ultimate performance the price of top end kit seems to have sky rocketed in the last few years; how much for an electric rear mech?! Though at the same time there has been a genuine trickle down of technology such that mid–range bikes now give incredible performance.

Today’s bikes are genuinely amazing. Sometimes though, I find myself looking back, maybe with rose-tinted glasses, and yearning for the bikes of yesterday. They stirred emotions that in some way’s today’s bikes don’t. I think maybe part of this is that it was much more common to buy a frame and then build up the bike with your choice of parts. The bike was customised by you, more personal and it took on its own character. Integration is a big theme today and bikes often come fully colour coordinated so customisation is less possible. I vividly remember lusting after the Klein Adroit with XTR and Tioga Disc Drive of a fellow junior competitor... the purple paint job and wow, the rumble of the Disc Drive! Now that was a bike.

I’m still tearing round the same trails I was 20 years ago, with the same grin, so on the face of it little has changed. However, the development of bikes has allowed us to ride more technical trails and to go faster and further. Suspension gives you the confidence to go faster which can sometimes get you into trouble, but also the chance to get back out it. You’re also less beaten up so you can ride all day in relative comfort.

Trail centres have emerged which offer an amazing riding experience and have become very popular; with everything you need on site they’re a great option for a weekend away with mates with less planning and less faff... more riding. For me though I still generally prefer the natural option. Pack an ordnance survey map and off you go.

In terms of the racing, again there have been subtle developments. The XC scene was incredibly strong in the late 90s. Domestic races had huge fields in all categories and there were a fair number of professional racers, including the super strong Team Raleigh, racing in both national and regional events. The World Cup scene featured very well-funded teams, with high-profile riders like John Tomac, Thomas Frischknecht and my favourite Rune Hoydahl. The races were extensively covered in magazines as well as being televised; everything was very rosy.

The XC scene declined pretty dramatically in the early noughties with many of the big teams pulling out after the Olympics, the number of World Cup events reduced significantly and many of the UK domestic series also scaled back. Recently there has been a very strong resurgence on both the domestic and international scene which is fantastic. In an attempt to make XC racing both more exciting and spectator friendly, courses have become more technical, in particular with more man-made features and shorter laps. I’ve got mixed feelings on this; I can see the logic for televised World Cup events but our national and regional events aren’t there yet and the short laps are restrictive, in that the course can only go so far from the arena so potential terrain and trail features are missed out. I also much prefer natural trails to man-made. A man-made rock garden just seems a bit... well, artificial.

Marathon races are gaining an increasing popularity, alongside the traditional XC format. They have actually been around since the beginning, with events such as the Grand Raid Cristalp recently celebrating its 25th anniversary. I’ve developed a real love for marathons, the courses are great, often in the mountains so you have great trails and they make an amazing long weekend away. Sadly in the UK, and in England in particular, they’re logistically tricky to stage due to the 'rights of way' issues we have. 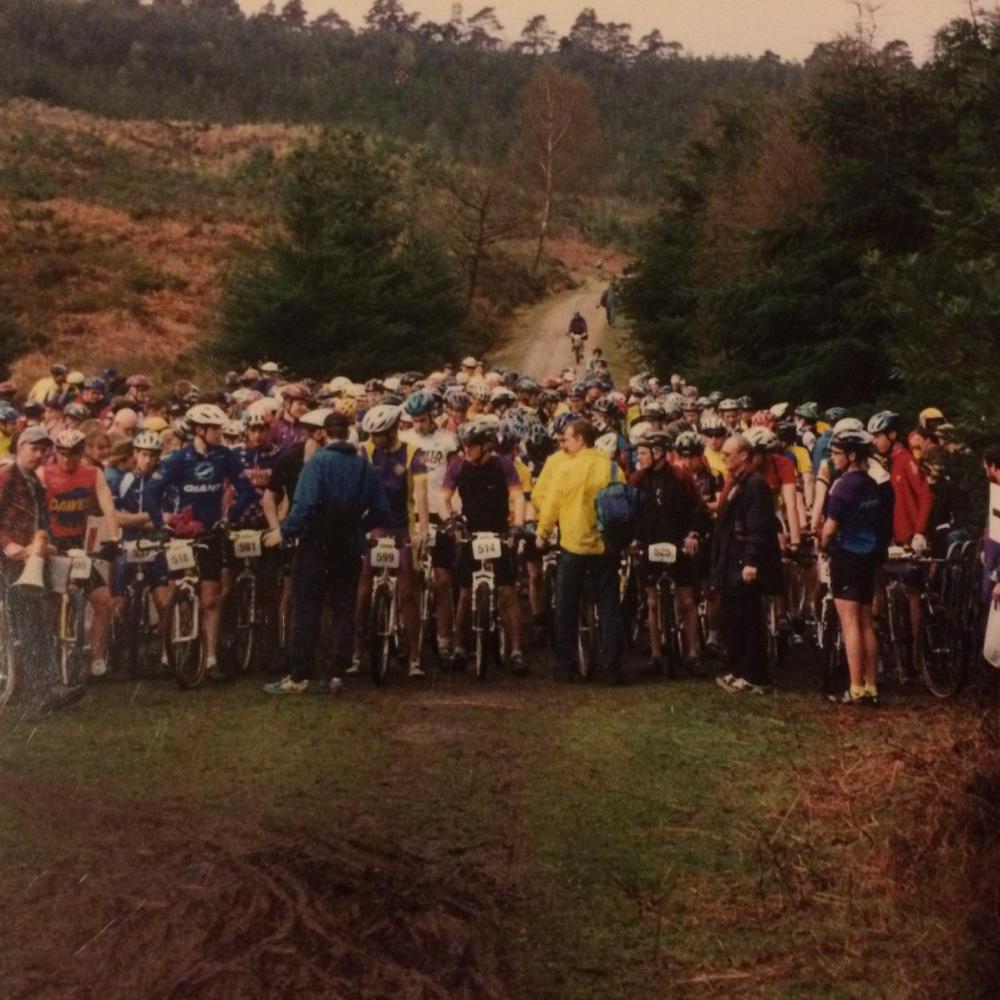 Retro racing..start of the Junior men’s race at the 1996 SAMS Rd 1 at Puddletown Forest, you can almost smell the fear![/caption]

Aside from traditional XC racing a number of new racing formats have emerged. Stage races have become very popular in the last 5 years or so. Their success is arguably in their appeal to both the pros smashing it at the front, and the amateur riders looking for a something different and challenging, in a fantastic setting. JoBerg2C is an excellent example, featuring some of the best trails and scenery in the world, every day you’re riding somewhere new and exciting with everything laid on. Ride, eat, chill, sleep, repeat. Stage races are often raced as a pair which adds another new dynamic. To do well you need to use team work, physical strength alone isn’t enough. And if you’re not riding at the sharp end your partner will be there to share in the good times and get you through the inevitable low points.

Pairs stage racing has really taken off in the last few years..slow down, please![/caption]

Endurance events are also a core part of the racing scene. Again, they are able to appeal to a broader range of riders than normal XC events. At the front there are solo, pairs or teams racing hard for the win. Further back, racers are riding equally hard to complete their first 12 hour or even 24 hour solo event. Team events are also great to catch up with your friends and chill out with your mates between laps.

So to summarise; the sport is looking rosy and bikes are better than they’ve ever been. Where does it all go from here. Bike wise we’re already seeing the next development in gearing with electric shifting - I expect this will be wireless eventually. E-bikes are also big in Europe and maybe one day we’ll see them become more popular in the UK. Racing wise, I expect challenge style, multiday events to become more and more popular. After the false dawn of XCalibre this year sees the first running of Epic Cymru which is looking great. As for the rest, hopefully I’ll still be riding in 20 years’ time to find out!