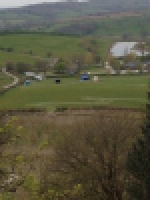 Fforest Fields near Builth Wells hosts the Welsh XC Championships on Sunday 8th May and thanks to Hugh Lloyd we can take a look at some of the sections of the race course. Loosely based on last year's National XC course, organisers, local club The Bulls have modified the course to reduce the amount of climbing but make no mistake this track in the Radnorshire hills will still favour the lightweight mountain goats. As well as vying for regional championship titles, racers will get a great opportunity to preview the course for Round 4 of the National Series as the circuit will only be altered if forced by wet weather.

In the Juvenile Men’s race Tim Freeman (Dreigiau Coed y Brenin Dragons) is the rider to watch after a fine second place at the Newnham National XC with a final lap charge almost enough to steal the win. 2015 silver medalist Josie Nelson (M&D Cycles) is best placed to graduate to the Juvenile Women's gold.

2015 second place finisher Joe Barnwell (Marsh Tracks RT) will be hoping to swap silver for gold in the Junior Men’s category but will have to fend off Simon Price (Graham Weigh Racing) who was the Youth category champion last year.

The Veteran Men's field has strength in depth, 2015 winner will likely see a challenge from recent adversary Anthony Malarczyk. Abergavenny's Tim Davies could also be a factor. Tim's teammate Julia Thomas will have it all her own way in the Veteran Women as the only entrant.

There will be a new Grand Veteran Men's Champion as defender Grant Johnson (Sunset Cycles) is out of action due to injury. In the Women's race National Champion Sarah Barnwell will be challenged by comeback queen 1989 and 1991 Elite Champion Sally Reid.

In the Senior Men's race defending champion Dylan Kerfoot-Robson (Team USN) brings good form into the race with a top ten finish at the recent Newnham National XC but still has a number of challengers to see off. Torq team rider Jacob Phelps, the 2015 Junior Champion also had a great race at Newnham taking the win Expert category win and will be looking to step up and mix it with the Elites. Former champion Lee Williams and new welsh inhabitant Steve James (Hope Factory Racing) will also be looking to challenge.

Last year's Junior Champion Ffion James (100% ME) will be hoping for a successful step up the Senior ranks and with a 5th place finish in the last National XC she is clearly the form rider ahead of previous champions Ruby Miller (Hargroves) and Mel Alexander. Endurance specialist Iwona Szmyd won't qualify for the championship but will be aiming for the podium.

Racing starts at 9.30am for the Under 8s categories and with a bone dry course and warm weather forecast the racing promises to be fast.