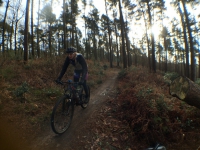 Elite cyclist Hannah Attenburrow has set herself a mammoth goal for 2016. Just four years after Attenburrow started competing in cycling, she is about to embark on the biggest race yet; to race across the roof of Europe over 7 days as part of an all-girl team in the 2016 Trans-Alp.

In July Hannah and her South African team mate, Michelle Reed will take on the Trans Alp stage race starting in Austria and travelling across the Alps to Lake Garda. Known as one of Europe’s toughest stage races the girls will be riding over mountains off-road on singletrack trails and down tricky descents. The 7 day race will cover 600km and climb over 19000m. I am sure you will agree this is an exciting and unusual experience.

Hannah said; “When I started racing after being inspired by the Olympics in 2012 I always dreamed of doing a multi stage race, now 4 years on I can’t quite believe that its real!”

This race will not only be physically but mentally demanding and will be the ultimate test of endurance. Hannah’s reasoning behind doing the Trans Alp is to inspire other women to take on sporting challenges big or small and achieve their own personal bests. Hannah also works as a coach teaching children and women how to get the most out of their cycling.

For this challenge Hannah is also delighted to be supported by biking giants Specialized who have agreed to support her 2016 race season. Olivia Bleitz, Women's business manager at Specialized said: "We are really excited to have you Hannah (Attenburrow) on the Era for the racing season"

Local bike mechanic Bike Fixers of Portsmouth who supported Hannah through her 2015 season will also be helping make sure her bike is race ready throughout 2016.

Check out Hannah's website for more news and handy training tips as she prepares for her epic adventure - www.HAttenburrow.com #thisisgoingtobeepic