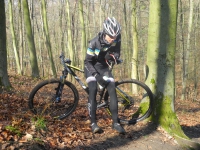 In 2004 cycling enthusiasts Will Cooper and Paul Beales had a vision to change the face of mountain biking in Britain and across the Globe, and for their team to achieve World-class status.

After nine seasons of hard work and gaining experience, and a string of successes for the team, 2015 will see the biggest change yet. What was once a far-off dream has become a reality.

With the unwavering passion now comes a new level of professionalism as major partners come on board to back the next step of the journey: to become the World’s number one professional mountain bike team by the 2020 Olympics in Tokyo.

There are new signings, new staff, new sponsors and a new goal but with all the same determination and commitment to the sport that has seen the team get to this point.

Sharing the team's vision is their major sponsor, leading African printing professionals, Paarl Media Group. The Group’s backing offers invaluable support across all aspects of an Olympic dream and everything that the team work towards.

“Paarl Media Group supported the team on a small scale in 2014. We were impressed by the professionalism of the team and the caliber of world-class riders that the team has in its stable, and is able to attract. This new chapter with the team is a natural progression. We are proud to align ourselves with the OMX Pro Team and look forward to the journey together,” says Stephen Van der Walt, CEO of Paarl Media Group.

Paul and Will have put their heart and soul into this team, ploughing on through tough times and holding onto the dream. Now, with the realisation of many of their goals, their feet remain firmly on the ground.

“We have taken a big step forward, however many things will stay the same. Our unique history, our hard work and commitment to be the number one, and you – our dedicated fans – remain unchanged. We would love for you to join us through social media and at events across the World as we embark on this exciting next step of the journey. Welcome aboard! #weareOMX”