Just when you thought it was safe to go back in the water...! We've not quite finished with our WEMBO wrap-up, as we've decided to feature Craig Bowles' write-up of his race. To be fair to Craig, he did win a World Champs jersey, and went straight to hospital after the race, so we'll excuse his tardiness in preparing his report.

“If I finished the race and was carried off the course and had to go to the hospital for a couple of days, I don’t think (my wife) would ever let me race my bike again.” Chris Eatough, 6 time 24 Hour Solo MTB World Champion, 2006.

For anyone who hasn’t seen 24 Solo; the story of Eatough’s quest for a seventh World Championship victory and his titanic battle with Australian challenger Craig Gordon, he is speaking after seeing his rival push himself beyond physical limits, starting the race at what seemed like a suicidal pace and ultimately damaging his body to such an extent that he spent several days in hospital on dialysis to recover. It’s a fantastic story for mountain bikers and non-cyclists alike, and poses some interesting questions about just how far as endurance athletes we are willing to push ourselves. Gordon took the victory on the day but Eatough felt he had won his own victory in recognising the importance of balancing racing with family life.

Fast forward eight years to Fort William, Scotland and the 2014 WEMBO 24 Hour Solo World Mountain Bike Championships and the parallels with the 2006 race were plain to see with the frontrunners forcing what many felt was a laughably high pace on the demanding course. Each 13.5km lap included 450m climbing with plenty of steep, leg punishing sections. The descents were pretty demanding as well with a liberal coating of rock. The twisting downhill were tremendous fun but required physical commitment and full attention throughout. Would any of the early pacesetters follow Gordon’s route to the hospital ? 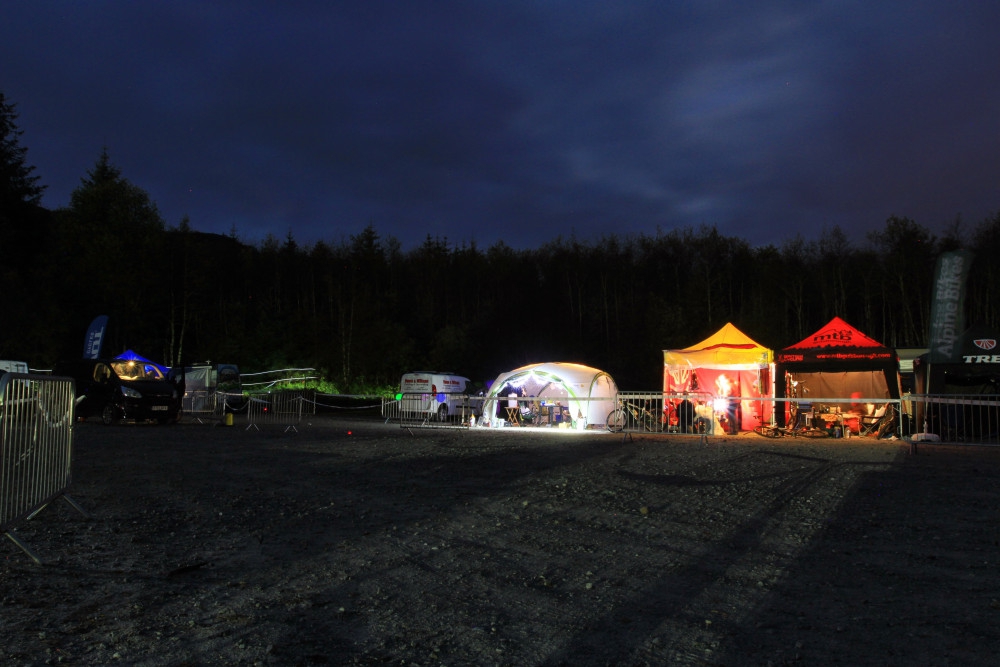 My strategy was straight forward and I planned to race the 24 hours ‘the Australian way’, a solid start but keeping plenty in reserve until the real race started at 1am. I predicted a train crash as the high early pace took its toll and planned to be in the mix for the inevitable burn up on the last few laps. I was racing in the 35-39 age group category and we were held back approx. 30 seconds behind the Elite riders. This gap was quickly covered up the opening fireroad climb, myself and singlespeed legend Brett Bellchambers soon latched on to the back of the Elite train. Already matches were being burned and fireworks going off as Brit 24 solo virgin Rob Friel, American star Kelly Magelky and UK endurance experts Dave Powell and Rich Dunnett traded blows. It was interesting to see that multiple World Champion Jason English didn’t participate in the early skirmishes and he looked ominously comfortable slightly ahead of a group of sensible British contenders and some of the European stars that I was circulating with.

It’s also worth noting that Jason English had only flown over from Australia the day before as the school at which he is a teacher had only given him 2 days off. He would also have to leave immediately after the race to be back at work on Tuesday morning. By lap 5 English had familiarised himself with the course and taken the lead. It was a cracking course ! Based largely on the 2007 World XC Championship course, it started with a vicious rocky climb out of the arena, followed by more steep climbing up through Sandy Brae. A brief respite led to the bottom of the super steep World Cup climb which got hardest at the top. Singlespeeders would be walking this early on and many on geared bikes would struggle on this later in the race. Another interlude along ‘The High Road’ led to the climb up through the pipe and a loop around to the ace switchback descent of ‘The Haggis Trap’. More fun ensued with continuous descending down ‘The Cat’s Back’, ‘Low Road’ and the rock challenges of ‘Witches Brew’ before flowing boardwalk led onto Mackenzies Road and back to the arena. Loop one complete. Next up a brutally steep ramp led onto the bottom section of the World Cup Downhill course, another brief skirting of the arena for more encouragement before starting the final climb. Initially up some tricky rock steps, then smooth fireroad before the switchbacks of the new ‘Cat’s Eyes’ trail. One final push to the top led onto the brilliant fun downhill course, followed by the twists and turns of ‘Blue Adder’ and back to the finish.

On such a fun course the afternoon flew by and by 5.30pm my ace Exposure lights were already mounted as we faced the prospect of 13 hours of darkness. Luckily I love night riding and enjoy the calm which settles over the course during these hours. It always amazes me how quickly these hours slip by and feel that it’s this time which defines 24 hour racing. The lack of light enriches your other senses and puts you more in touch with your own feelings and surroundings. I also love the feeling of exclusivity; as if the rest of world is asleep and it’s just you, your bike and the trail. While I was wrapped up the spiritual side of mountain bike racing, the race was getting interesting. I’d taken a different approach to the this race and had asked my crew not to give me any positional updates until the early hours of the morning when we’d planned to start applying some pressure, so it was a surprise at midnight to hear from Matt Carr that I was up to 5th position. It was one of the highlights of the event for me to see Matt back racing instead of the commentating/heckling as he has been doing for the last couple of years (although he was still doing a pretty good job of commentating from within the race !)

The next few laps were a series of surprises. First lapping Aussie legend Bellchambers, then catching and passing speedy 24 newbie Rob Friel and finally catching 24 solo legend Ant White. Rob was laying down an amazing ride in his first ever 24 solo, hammering the early laps and still riding strong despite long pit stops to make himself soup ! With more experience and some tips to limit time losses he’ll be a real force to be reckoned with. Ant was also flying despite losing the lens from his glasses and we egged each other on for a couple of laps in the early hours. It was an honour to have the box seat for a short time to witness arguably the finest performance by a British rider at the 24 Hour world Championships as he pushed the defending champion hard in the final few hours, eventually settling for the silver medal.

By 7am I was up to 3rd place overall and leading the 35-39 age group category by 2.5 laps. Things were looking great for the planned final push in the last few hours. But you can never take anything for granted in a 24 solo, problems are to be expected and how you overcome those problems is a key ingredient to success. In such a tough race everybody has some sort of problem and here there were plenty of challenges. Mechanical difficulties, stomach issues, fatigue and even blindness affected riders throughout the event. Breathing was my problem ! Around 5am I noticed that the damp air was starting to get to my lungs and I was struggling to keep my breathing under control. I hoped daylight and warmer conditions would sort me out but I didn’t make it that far and took a long pit stop while the crew tried everything to clear my lungs.

It looked like it was game over and I was certainly out of the race for the overall but with less than 5 hours of the race to go and still running more than 2 laps up in the 35-39 age group there was still a chance to hang onto victory in my category. We figured if I could nurse my dysfunctional lungs around 3 more laps that should be enough. So sounding like Darth Vader I pressed on, walking the steep climbs, twiddling low gears up the gentle hills and carrying as much speed on the downhills as possible. The camaraderie out on course from marshals and fellow riders alike infused me with energy and despite moving embarrassingly slowly around the course I completed those 3 laps to hang onto a lead of 1 lap and 40 minutes and become the 35-39 age group World Champion.

That final lap was particularly tough. I’d hidden the full extent of how bad I was feeling from the pit crew in case they pulled me from the race and now I realised how foolish that decision had been. From the finish line I went straight to the medics for a check over and they quickly put me on oxygen and took me straight to the local hospital. So in the end it was me who did a ‘Craig Gordon’ and ended up in hospital ! A chest X-ray showed I wasn’t suffering from a pneumothorax but did show some abnormalities and blood tests showed some worrying signs of heart damage or even hypertrophic cardiomyopathy (the condition which led footballer Fabrice Muamba to suffer a cardiac arrest during a Premier League match) so I was kept in overnight for cardiac monitoring and an echocardiogram. This was scary stuff but the staff at Fort William Hospital were brilliant, providing top quality care and quickly performing the tests needed to reassure me that that my condition wasn’t as serious as first feared. I still need to have some follow up tests but we are hoping that the issues were caused by an infection I was already carrying that was exacerbated by the race and conditions. 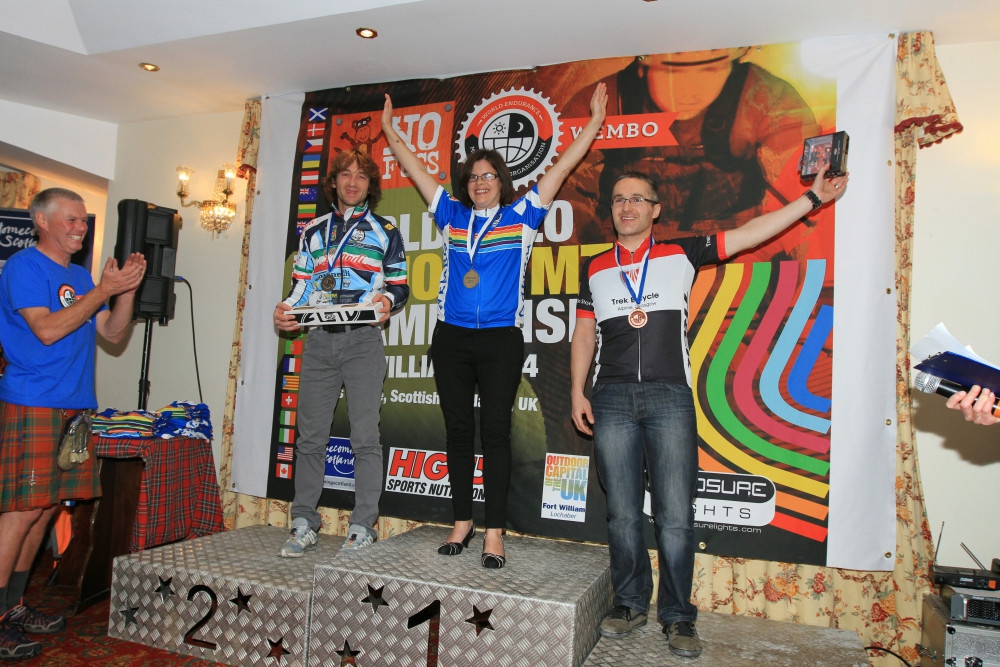 My overnight medical stay meant I missed the prize presentation but my wife Jo did a brilliant job in collecting the World Champion jersey and gold medal. She did a fantastic job on the podium and it was another highlight for me to see her get some recognition for the truly phenomenal amount of support she provided both in the pits at the race and during the months of training leading up to the event. Now the big question is whether she’ll ever let me race my bike again ? Weaverville 2015 ? Let’s see…..

Huge thanks to the following people:-

Exposure Lights for lending me awesome lights for the race.

Frazer, Spook and Fiona of No Fuss Events and Russ Baker of WEMBO for organising a brilliant event in a simply awesome venue for a mountain bike race.

All the supporters, marshalls and fellow racers who cheered me on in person or watching via the Internet. I still can’t believe how many people stayed up all night hitting the refresh button to follow the race.

The staff at Fort William hospital for incredible care and professionalism.

And most importantly my wife Jo and our boys Cam and Zac – I couldn’t achieve any of this without your love and support.